With a presidency mired in scandal after scandal, late show hosts consistently source their material from happenings in Donald Trump’s administration.

So its no surprise that Tuesday’s after-hours programming was chock full of devastating digs at Trump, who appears to be inches away from facing articles of impeachment from the Democrat-controlled House of Representatives.

Comedy kings including Stephen Colbert, Trevor Noah, Jimmy Fallon and James Corden had a field day mocking the president’s plight while bringing up the controversies that have plagued his presidency in the past.

Late night hosts mercilessly mocked Donald Trump’s impeachment troubles while dredging up scandals that have plagued his presidency in the past during Tuesday’s after-hours programming. Stephen Colbert (pictured) listed of a string of past Trump scandals before telling viewers to ‘buckle up’ because ‘there’s a new thing, and it might be “the thing”‘ 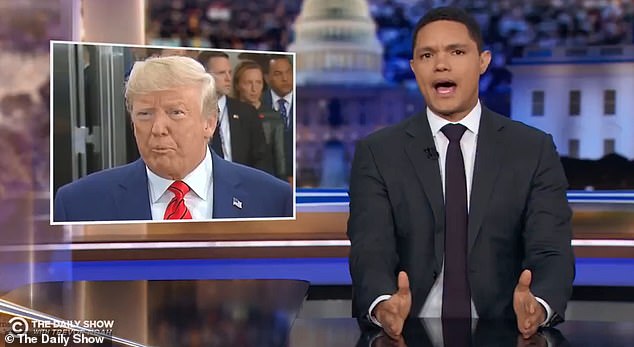 The Daily Show’s Trevor Noah (pictured) joked: ‘If you thought Trump was unhinged before, imagine what he’s going to be like now’

House Speaker Nancy Pelosi announced the launch of an official impeachment inquiring on Tuesday evening amid allegations that Trump threatened to withhold US military aid from Ukraine unless its president, Volodymyr Zelensky, agreed to dig up dirt about his political rival Joe Biden.

In an unsurprising move, Trump branded the allegations a ‘witch hunt’ and insisted that he did not coerce Zelensky.

But the alleged scandal proved enough to convince Pelosi to open the inquiry her party has been pushing for for months.

Colbert opened The Late Show by listing off a string of scandals in Trump’s wake and playing a clip of Pelosi’s announcement.

The audience responded with a 40-second standing ovation.

‘Buckle up, because for two and a half years, Donald Trump has had scandal after scandal — Russian collusion, obstruction of justice, saying Nazis are “fine” people, being an unnamed co-conspirator to campaign finance violations, lying about the Moscow Trump Tower, stealing money to pay for the border wall, faking the weather with a sharpie,’ Colbert said.

‘But here’s the thing, there’s a new thing, and it might be the thing,’ he added excitedly. 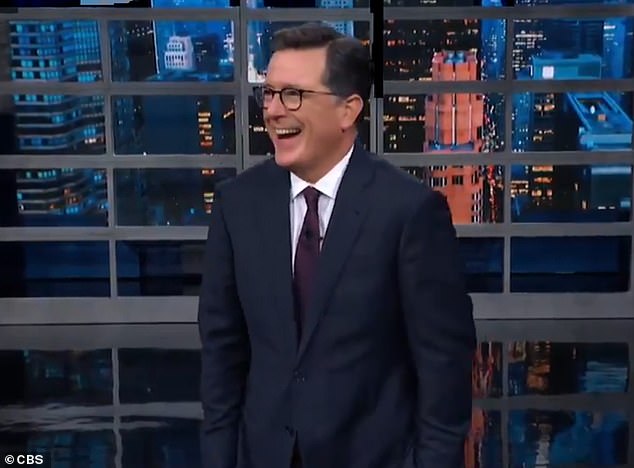 The Daily Show’s Trevor Noah also kicked off his show with the news.

‘After two years of avoiding it, Trump may finally face articles of impeachment. Which, believe me, he is not happy about. It’s impeachment, which he hates, plus articles, which he hates more. If his mom ever caught him with a Playboy magazine he’d be like: “I swear I’m not reading the articles, just looking at the boobs.”‘

He added: ‘If you thought Trump was unhinged before, imagine what he’s going to be like now.’

In explaining the Ukraine allegations that sparked Pelosi’s announcement, Noah mocked the fact that Trump is being accused of another collusion scheme months after the Russia investigation.

‘It’s an abuse of power. It’s extortion, and maybe worst of all, it’s asking a foreign country to meddle in America’s election,’ Noah said.

‘It’s the one thing that if you were Donald Trump, you should stay away from, because they’ve just beaten the Russia case. It would be like, if the day after Michael Jackson got acquitted of touching kids, he was like: “Let’s celebrate. Slumber party at my house”.’

Noah brought senior correspondent Ronny Chieng on set to get his reaction, and the comedian joked that he is ‘skipping this one’ because ‘I’m not getting burned by another scandal that lasts two years and goes nowhere’. 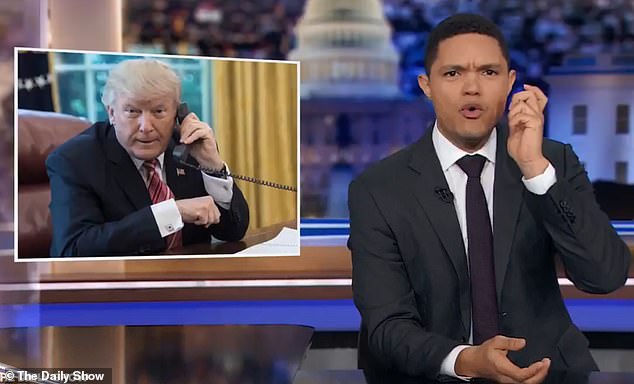 Noah did an impression of Trump on the phone call where the president allegedly threatened to withhold US military aid from Ukraine unless its leader, Volodymyr Zelensky, agreed to dig up dirt about his political rival Joe Biden

Jimmy Fallon took a more unique approach and dressed up as Trump delivering a speech to the UN.

‘Now, it looks like my whistle’s been blown, not in a good way.’

He continued: ‘All my supporters, I just want them to relax, okay? Because as hard as people try to impeach me, I’ll always be one step ahead of them trying to impeach me harder.’ 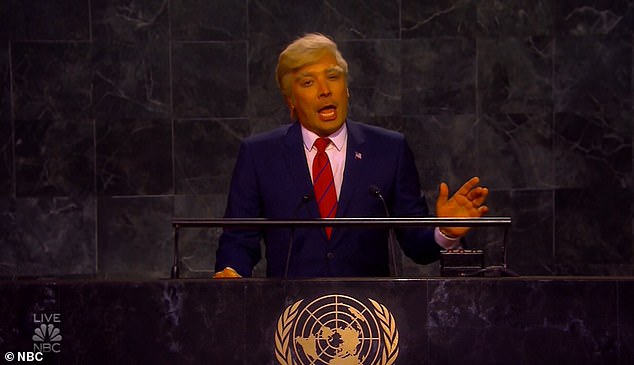 Jimmy Fallon took a more unique approached and dressed up as Trump delivering a speech to the UN. ‘Who knew you make one phone call blackmailing a foreign leader and everyone acts like you blackmailed a foreign leader,’ Fallon’s Trump said

‘This is it, guys. Let the talking stop and the inquiring begin.

‘At this rate Democrats should have Trump impeached by the last six months of his second term.’

The British host added: ‘It’s like the old saying goes, work with a foreign government to undermine a democratic election once, shame on you. Do it twice, we’re going to inquire about the possibility of doing something this time. Maybe. We’ll see. Possibly. I don’t know.’ 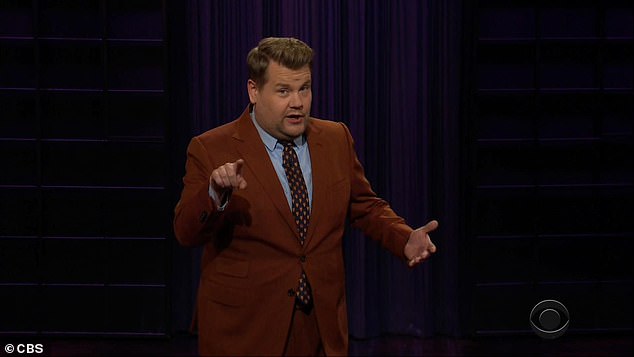