The seriousness of Latrell Mitchell’s recurring hamstring injury has been brought into focus by South Sydney’s decision to fly their star to America so he can see one of the world’s leading specialists.

The Bunnies fullback has been out since tearing the muscle in round five, after rupturing his hamstring tendon on the same leg against Parramatta in August 2020, keeping him sidelined for five months.

Souths are taking no chances with his recovery as they seek to preserve his long-term career and are sending him to see renowned doctor Bill Knowles, the Daily Telegraph reported.

Mitchell grimaces in pain after tearing his hamstring in Souths’ win over the Dragons in round five. He ruptured the tendon on the same hamstring in 2020, keeping him sidelined for months 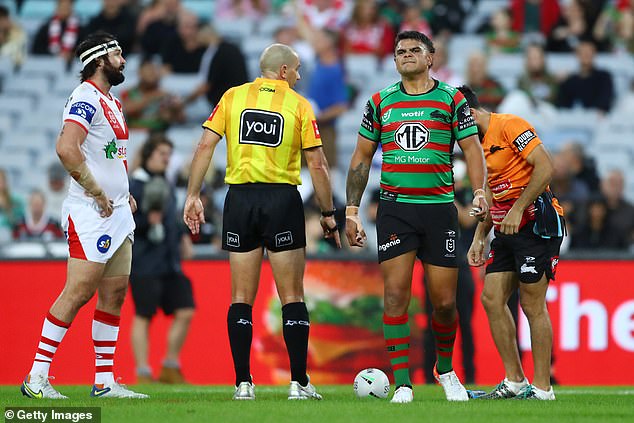 The star fullback (seen moments after this year’s injury) will head to the US to see world-renowned specialist Bill Knowles, who has worked with a host of superstar athletes

Knowles bills himself as a ‘reconditioning specialist’ who has ‘pushed the boundaries of sports medicine’ by using ‘more progressive methods’ to help elite athletes recover from injury.

He has worked with superstars such as Tiger Woods, Andy Murray, NFL legend Peyton Manning, AFL ruckman Nic Naitanui and rugby legend Jonny Wilkinson, and been used by teams including Manchester United, Chelsea, the San Francisco 49ers and Geelong Cats.

Last week Souths revealed that Mitchell was having surgery on his knee to fix a minor problem so he could kill two birds with one stone while out with his hamstring problem. 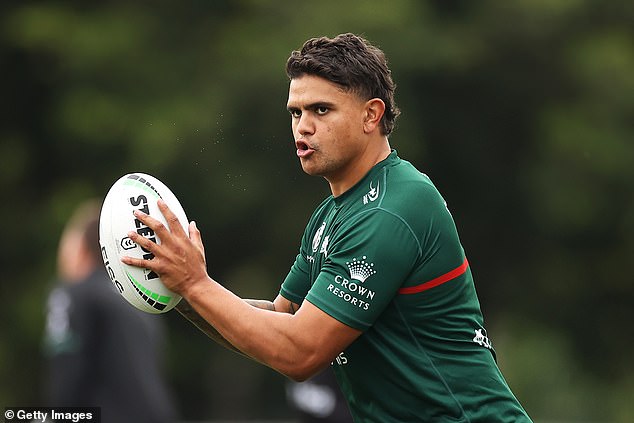 Souths revealed the fullback has undergone minor knee surgery as he recovers from the hamstring tear, which will prevent him from playing State of Origin for NSW on June 8

The club said the arthroscopic procedure has a recovery time of four to six weeks, which matches up with his expected return date from the more serious injury, which would see him become available around the time of Souths’ round 13 bye.

Rabbitohs physio Eddie Farah said the star was recovering well after having his knee dealt with.

‘Latrell is up and about, bouncing around, and feeling much better already. We just started the rehab process and he has been strengthening that knee as well as the hamstring.

‘He is tracking well and on track for a return to play in the middle of the season.’

Mitchell is not currently expected to be fit enough to be selected for the first State of Origin Game on June 8.