Latrell Mitchell has shared an Instagram post claiming he was unfairly criticised for breaking social distancing rules because he is indigenous.

The Rabbitohs fullback and Melbourne Storm star Josh Addo-Carr are being probed by the NRL and New South Wales Police for going on a 12-man camping trip on the state’s mid north coast over the weekend.

Photos posted to social media showed the men dirt bike riding, shooting guns and sitting around a campfire at a rural property in a breach of NSW’s social distancing rules, where gatherings of more than two people are banned.

Hours after apologising to outraged Australians, Mitchell posted a photo to Instagram of a photo of a crowd of swimmers on Coogee beach alongside a snap of his camping group sitting around a fire.

Latrell Mitchell shared the post to his Instagram. The photos, which were originally posted by an NRL fan, were labelled ‘Coogee Beach’ and ‘Private Property’ 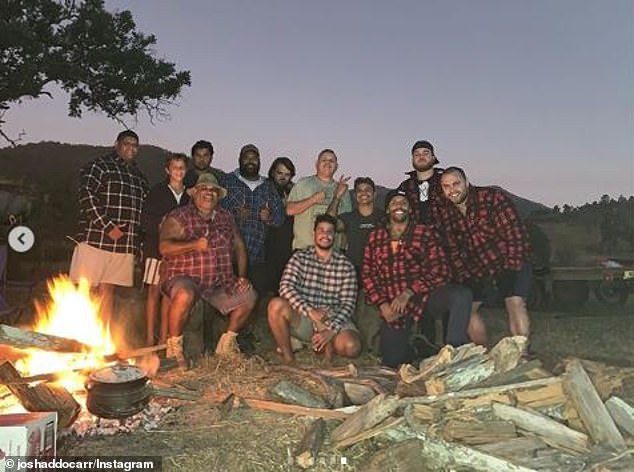 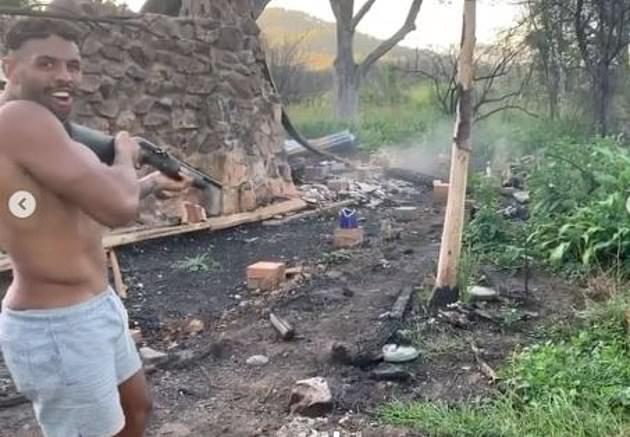 The photos, which were originally posted by an NRL fan, were labelled ‘Coogee Beach’ and ‘Private Property’.

‘Can you spot the difference? I can,’ the fan’s post read. ‘One group of people is coloured! I stand with ya cuzz.’

Latrell, 22, and Addo-Carr, 24, were both fined $1,000 each by NSW Police for breaking social-distancing laws as investigations begin into an alleged firearms breach.

The NRL’s integrity unit is investigating, and it’s understood interim CEO Andrew Abdo could hand down punishments for the pair as soon as today.

It has come at the worst possible time with the NRL on the verge of finalising delicate discussions with television broadcasters and governments to restart the season on May 28.

Both players apologised for the weekend gathering at the property near Taree, with Mitchell admitting the Kangaroos stars had ‘slipped up’.

Mitchell insisted they did not mean to flout rules imposed by the federal and state governments to stem the coronavirus pandemic.

‘I have been up here with my family for four or five weeks practising social distancing,’ Mitchell said in a video.

‘It was a little bit of a slip up. Foxy (Addo-Carr) reached out, his cousins are going through a bit of stuff up in Sydney.

‘He just wanted to get up to the bush and make sure they were getting cultured and connected again.

‘That was the whole part of the concept of what the weekend was. I wasn’t here to break any rules or hurt anyone.

‘We’re not being selfish, I couldn’t turn down the brothers in a time of need.

‘On behalf of Foxy and all my mob, we do want to apologise.’

NSW Police released statement saying they were aware of a group of the breach.

‘Police have been told a group of more than 10 men were at a gathering on a rural property near Taree on Saturday 25 April, in contravention of current ministerial directions,’ the statement read. 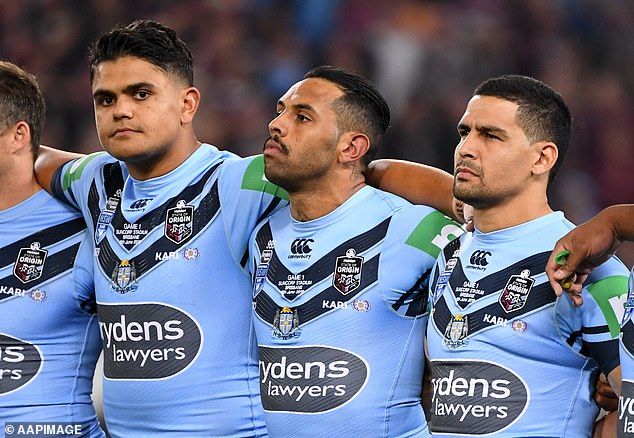 Latrell Mitchell (pictured, left) and Josh Addo-Carr (centre) are seen with team mate Cody Walker as the trio played in the State of Origin series in 2019

‘Following extensive inquiries, three men – two aged 22 and one aged 24 – have been issued with $1,000 (fines) for failing to comply with a ministerial direction.

‘The 24-year-old had previously received a warning for breaching the Public Health Act.

‘Inquiries are continuing to identify the other persons and continue investigations.

‘Investigations are also continuing into other potential offences, including potential breaches of the Firearms Act (1996) at the Taree property.’

Former Penrith boss Phil Gould called for the pair to be banned for the rest of the NRL season.

‘Honestly, they don’t deserve to be playing this year. Simple as that,’ he told Wide World of Sports Radio on Monday night.

‘I know that might seem harsh, but the message has to get through to everybody.

‘What they’ve done is highly irresponsible. It’s put themselves above their teammates, their club and the game itself and that might seem like a harsh penalty but these are very, very difficult times and it was just uncalled for.

‘Particularly when we’re on the eve of trying to get back and particularly that the game was trying to convince the government that we can follow strict protocols and act outside the rest of society.’