The number of deaths from inhaling so-called hippy crack has doubled in just one year, alarming figures reveal.

Government data shows that eight people died from using laughing gas last year, a 200 per cent rise of the four deaths recorded in 2015.

Nitrous oxide, otherwise dubbed ‘hippy crack’, can lead to asphyxiation because of how it is consumed, often through balloons.

It has long been used by thrill-seeking youngsters at festivals, nightclubs and gigs, and has been likened to snorting cocaine.

Prince Harry has previously been seen indulging in laughing gas, and actress Michelle Keegan has also been pictured inhaling balloons.

The ‘appalling’ new data, collected by the Office for National Statistics, has prompted experts to warn teenagers against using it and call for urgent action to reverse the ‘appalling trend’.

It follows the death of student Miguel Fernandes, 19, in February, who was found dead with a plastic bag around his head after taking the drug.

Nitrous oxide, otherwise dubbed ‘hippy crack’, can lead to asphyxiation because of how it is consumed, often through balloons

Ian Hamilton, a drug researcher at York University, told MailOnline: ‘This significant rise in deaths due to nitrous oxide use needs urgent action, we need to educate young people about the dangers of using this drug.

‘While the drug is relatively safe, the way it is used means people are at risk of asphyxiation.

‘These reported deaths are most likely to have been accidental rather than deliberate, that gives us an opportunity to reverse this appalling trend.’

He added: ‘Anyone walking through a city centre will see the evidence of how widespread the use of nitrous oxide is as the discarded canisters litter these streets.

‘Young people need to understand the dangers of using this drug, particularly those that have never used it before. ‘

They certainly shouldn’t use this drug on their own or in combination with alcohol.’

The figures showed that nitrous oxide was mentioned on eight death certificates in 2016, doubling the four it was recorded on the year previous.

Between 1993 and 2009, the drug killed just six people, statistics reveal.

Nitrous oxide, which can cost just £3, gives users an intense feeling of euphoria. It can last for up to a minute.

Laws state it is illegal for the canisters to be sold for recreational purposes, but they can be bought on the dark web.

Those seeking the high can still purchase the drug if they buy from online catering companies, as it used to make whipped cream.

These canisters are then used to inflate balloons with, allowing users to inhale the gas in the same way as helium – which makes voices high-pitched.

How many people use it?

Nitrous oxide dissolves almost immediately in the bloodstream, reducing the amount of oxygen flowing to the brain and other vital organs.

This can lead to strokes, blackouts, seizures, heart attacks. Worryingly, doctors are unsure of a ‘safe’ amount.

Frequent users can also develop a vitamin B defiency, as the drug can stop it from being absorbed properly, leading to serious nerve damage.

Nitrous oxide has been used for thrills since the 18th century, reports suggest, with Sir Humphry Davy, former president of the Royal Society, being a user.

Possession of nitrous oxide is legal in the US. 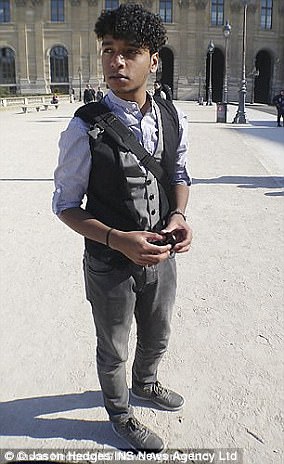 Miguel Fernandes, 19, was discovered in his student flat in Egham, Surrey, surrounded by nitrous oxide canisters

An astrophysics student was found dead with a plastic bag around his head after taking ‘laughing gas’ a day after his girlfriend dumped him.

Miguel Fernandes, 19, was discovered in his student flat in Egham, Surrey, surrounded by nitrous oxide canisters, on February 18.

Mr Fernandes, who studied at Royal Holloway University, had not spoken to anyone after splitting up with his girlfriend, Arianna Saba, the day before, an inquest in Woking heard.

A statement written by his father Luis, who sat in the hearing along with Mr his mother Karen, was read by coroner Anna Crawford.

Ms Crawford said: ‘He has disclosed that Miguel was a very gifted student and he had won a place at the Royal Holloway University to study astrophysics and at the time of his death was in the second year of study, having started in September 2015.

‘He sets out some background about how Miguel got on with his studies and says, ”Miguel was a happy boy who never had any mental health ailments like depression or anything of that nature”.

‘When at university Miguel kept in contact with his family on a regular basis. He states that they were aware Miguel had been in a relationship whilst being at university.’