Launching his new book, Monty Don tells how his beloved dog died the day after he finished it

Dear old Nigel. Was ever a dog more universally loved – and collectively mourned – than Monty Don’s beloved golden retriever who died in May? Gentle and affectionate, Nigel became Monty’s inadvertent co-star on the BBC’s Gardeners’ World: there was never a plan to make him a canine star but he just loved the camera and, biding his time patiently through the endless hours of filming, seemed to know intuitively where and how to strike the best pose.

Viewers adored him, just as Monty and his family did, and his passing provoked the most extraordinary outpouring of grief. Nigel’s death, shortly before he turned 12, made front page news.

Monty, who spoke about his loss on TV and radio, received hundreds of thousands of condolence messages from all over the world.

Monty Don revealed his golden retriever Nigel spent lockdown by his side as he wrote his new book, but died the day after it was finished. Pictured: Monty with Nell and puppy Patti

‘Nige was a star and he just found his calling on TV,’ says Monty, Weekend’s gardening correspondent and the nation’s favourite horticulturalist. ‘He was also incredibly photogenic.

‘Once I went to Buckingham Palace and the armed guard asked, “Where’s Nigel?” I got on a plane at a tiny airport in the Midwest of America and a guy there asked me, “Where’s your dawg?” It seemed extraordinary but wherever I went in the world, everyone knew Nigel.

‘Wherever I went to give talks I knew it was Nigel people wanted to see really, not me. I went on The One Show and he was a star guest with his own dressing room and limousine.

‘At the Hay Festival he gave an hour-long interview – it was a sell-out. I only went along as his interpreter. He was such a loyal, affectionate dog and to outsiders he seemed almost saintly.’

I remark that there must have been a veritable tsunami of tears in the Don household when he died, but Monty says he didn’t cry.

‘And the reason is, he’d had such a good life and he’d aged well. He was never ill but he got older in a slower and very dignified manner without apparent problems. And he’d lived to a good age, particularly as he’d broken his back – he’d twisted it as he jumped to catch a tennis ball – when he was four.

‘He had such wonderful treatment from Noel Fitzpatrick [before he became TV’s Supervet] and he recovered completely. But Noel said to me at the time, “He may have a shorter life as a result.” So in a way, the next eight years we saw as a bonus.

‘He was a week short of his 12th birthday and he’d been very happy during the day. There wasn’t an inkling that anything was wrong. It was all very sudden and dramatic. He had these seizures that lasted all night. 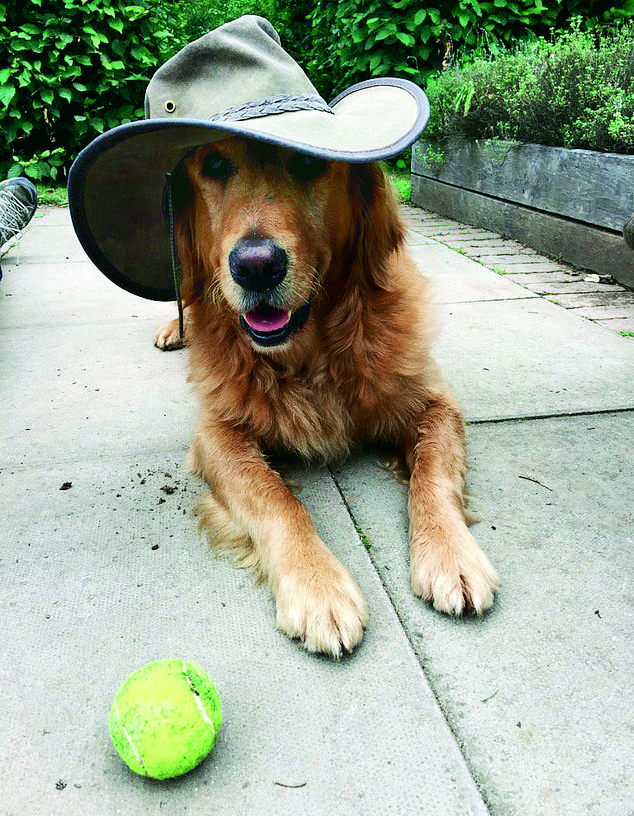 Monty said Nigel was a week short of his 12th birthday when he died and was buried with tennis balls and biscuits. Pictured: Nigel loved fetching tennis balls

‘We took him to the vet at dawn but every treatment failed and the following evening he was put to sleep.

‘We buried him with honours with tennis balls and biscuits, and I put flowers on his grave.

‘When anyone you love dies the real loss is in the things you didn’t say or do but with Nigel we didn’t have those regrets. He couldn’t have had a better life.

‘It’s just that we miss him. And even now I expect to see the old boy pad up to me.

‘But he’s gone. So although we didn’t weep we grieved for him and feel very lucky indeed that we had such a lovely dog.’

Nigel died on 4 May. He had spent the previous months of lockdown at Monty’s side as he wrote a book, My Garden World, a hymn to the glories, great and small, exotic and commonplace, of nature that surrounds us – which we are serialising on pages 78-80 of today’s magazine.

‘As I wrote, Nigel was by my side, either sleeping at my feet or gently rolling a slobbery yellow tennis ball across the keyboard as a hint that real life was lived outside,’ says Monty.

‘He died the day after I finished writing the book.’ Monty then felt compelled to write an extra chapter about Nigel, which you can also enjoy at the back of this magazine. 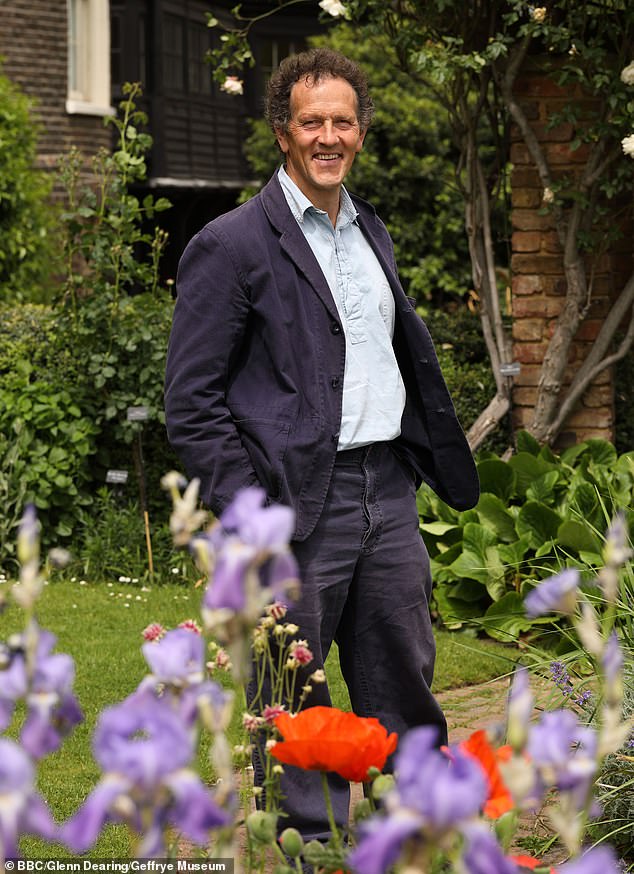 Nigel (pictured) said our appreciation of wildlife grew throughout lockdown, his new book taps into the reawakening of the joys of our gardens

The book taps into a national reawakening to the joys of our gardens. As months of isolation in glorious spring sunshine brought us into closer proximity with the plants and wildlife that surround us, Monty – with his keenly observant eye – gives us striking insights into the natural world on our own doorsteps.

‘Our awareness and appreciation of wildlife has grown during lockdown,’ he says.

‘The key point is observation: it’s always been there but most of us haven’t had the time or patience to sit quietly and really look at the fascinating world of our gardens.

‘The book is a celebration of a whole range of wildlife, some thrilling and rare; some right under our noses if we just look and listen.’

Monty writes lyrically about the proliferation of birdlife around us.

‘If swallows are poetry, martins are witty prose. Swallows are all elegance and scything grace, whereas martins are tumblers and high-wire daredevils. Swallows break your heart when they leave and martins put a smile on my face every day they’re here.’

He reveals that the chaffinch sings in its own local dialect; that magpies can live to be 20 years old; that jackdaws bond with life-long partners whereas dunnocks are rampantly promiscuous: ‘The male’s testicles will swell until they account for nearly eight per cent of its body weight – the equivalent of 15lb for a 200lb man. 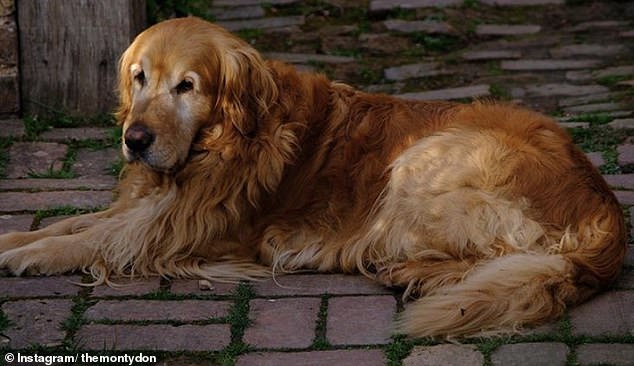 Monty who turned 65 in July, recalls having a stroke in 2008 because he was ‘burning the candle at both ends and in the middle’. Pictured: Nigel

‘Meanwhile the female, who initiates mating, may copulate 30 times a day and with every male dunnock around, and the males aim to do likewise with every local female. It is quite a set-up.’

There are quirky observations, too. The stink of poisonous hemlock reminds him of the gerbils his dad – his prep-school science teacher – kept in the classroom.

And he tells us why wild clematis is known as the ‘baccy plant’, because in hard times country folk would smoke it.

Monty turned 65 in July and I wonder if he has felt any intimations of ill-health since he suffered a minor stroke in 2008, but he assures me he’s in fine fettle.

‘That was 12 years ago and I think it was caused by overwork, burning the candle at both ends and in the middle. I’d been filming Around The World In Eighty Gardens over about 16 months, and doing Gardeners’ World as well as my Weekend column and a couple of books.

‘Something gave and looking back it was a godsend because it made me stop. I didn’t do anything – except my Mail column – for six months. It was a chance to take stock.’ 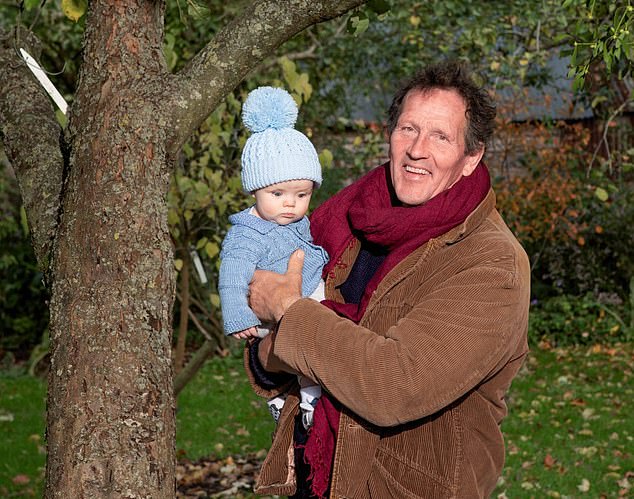 His family (Sarah, his wife of 37 years and grown-up children Adam, Tom and Freya) remain his primary source of joy and last year he and Sarah became grandparents for the first time when baby George was born on the same day as his dad, Adam, 34.

George is named after Monty’s 4x great grandfather, a plant hunter who fell out with the RHS 170 years ago when he revealed his discoveries in a rival scientific journal.

Adam runs the family farm, 50 acres in the Black Mountains of Wales not far from Monty and Sarah’s home Longmeadow in Herefordshire, which will be familiar to viewers of Gardeners’ World.

By contrast the farm, which they bought 15 years ago, is a sanctuary away from the TV spotlight. Monty’s visits there have been infrequent this year though because of the Covid restrictions.

I adore my grandson, but we couldn’t visit him

‘Adam was running the farm so there was no justification for me to go there, which meant I couldn’t visit George. I adore him, of course, and the only real hardship of lockdown was that Sarah and I couldn’t go to see him.

‘But he’s fine and he’s giving us huge pleasure. We only saw him again quite recently when he came here.’

But although you’re unlikely to spot a toddler on the veggie patch with grandad on TV, you might well see Monty’s (relatively) new Yorkshire terrier Patti, who – at just over a year old – is proving as much of a natural in front of the camera as Nigel was.

‘Patti was only unleashed on the public recently,’ says Monty.

‘She was so tiny – like a furry bumble bee – when we got her and she’s still pretty small. But she has a very big character.

‘Whatever you’re doing, she wants to be there too. She used to love Nigel and sleep on his back, and like him she’s really taken to filming.’

Monty’s other dog Nell is less inclined to be a celebrity. Today Monty reveals that a recent horrific accident – in which Nell’s throat was speared by a stick – has prompted him to implore dog owners not to throw sticks.

‘Nell is a retriever and she just loves fetching anything and bringing it back to you,’ he says.

‘But the other week she charged at a stick I’d thrown for her and it speared into the back of her throat. She immediately went into shock.

‘The stick had missed two arteries and a major nerve by millimetres. She’s lucky to be alive. Throw a ball instead,’ he says, ‘or give them a stick to carry.’

Dog lover, nature enthusiast and, of course, the nation’s favourite gardener – Monty has also been dubbed the thinking woman’s crumpet. ‘I’m a 65-year-old man!’ he harrumphs when I mention it. But doesn’t he find it a tiny bit flattering?

‘It’d be a lie to say I disliked it,’ he admits. ‘But in our house there’s certainly no hero-worshipping. If I get fan mail Sarah just raises an eyebrow and smiles enigmatically.’

And probably mentions that his female fans don’t have to put up with his snoring, I suggest. ‘Exactly that,’ he smiles.