A Laura Dern-lookalike is using her resemblance to the actress to find online fame, as she proudly posts photos of herself imitating the star.

Wojciechowski’s dedication to emulating Dern has earned her more than 11,000 Instagram followers, and she couldn’t resist paying homage to the Big Little Lies star’s Emmy win this week.

Like twins! Laura Dern (left) lookalike Maria Wojciechowski (right) shares photos of herself recreating the actress’ most famous look on her ‘I Look Like Laura Dern’ Instagram page 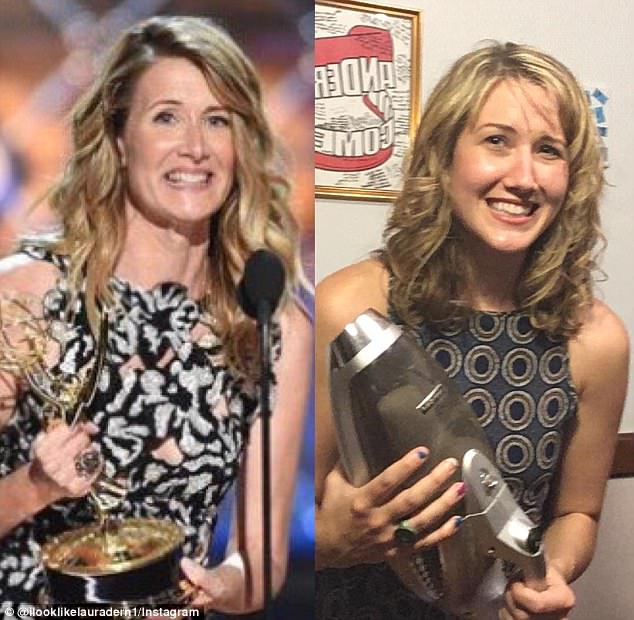 Acceptance speech: Wojciechowski took on Dern’s Emmy win from Sunday night, sharing a photo of herself holding a handheld vacuum in place of a gold statue 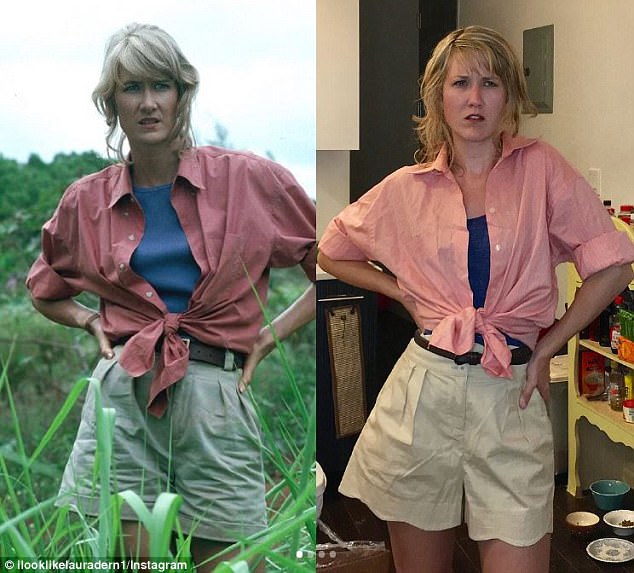 Famous role: The comedian from Brooklyn is a dead ringer for Dern’s character in the 1993 hit film Jurassic Park

After Dern took home the award for Outstanding Supporting Actress in a Limited Series or a Movie for her role in Big Little Lies on Sunday, Wojciechowski looked for a creative way to imitate the actress’ during her acceptance speech.

Wojciechowski shared a photo of Dern holding her Emmy at the podium alongside a snapshot of herself holding a handheld vacuum cleaner.

Although her dress was a far cry from Dern’s Proenza Schouler gown, it featured a similar neckline, and she made sure to style her blonde hair is tousled curls just like the star. 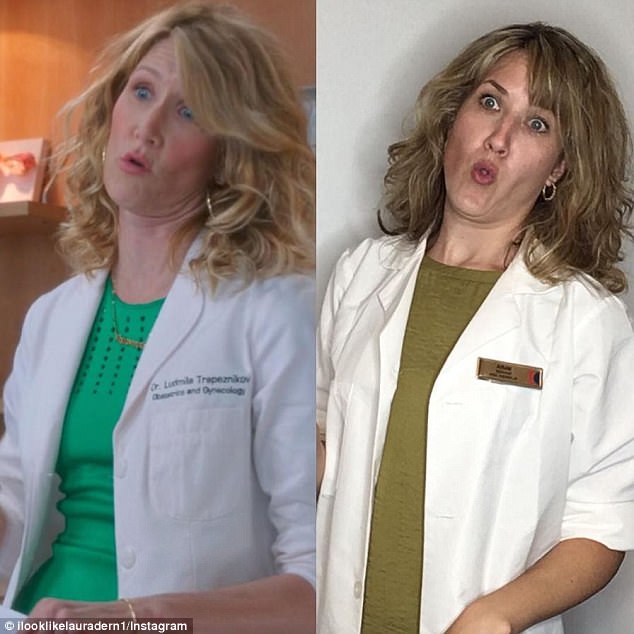 Same face: Dern played an OB-GYN on The Mindy Project, and Wojciechowski nailed her facial expression 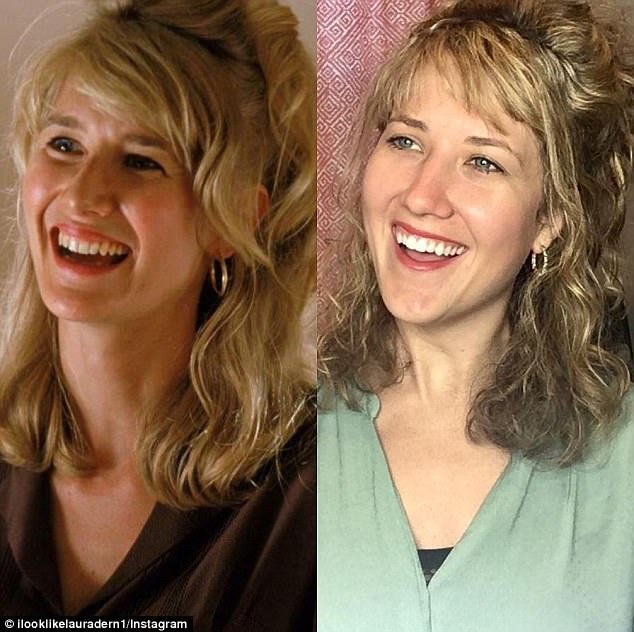 Nailed it: Wojciechowski perfected Dern’s hairstyle in the 1993 film A Perfect World 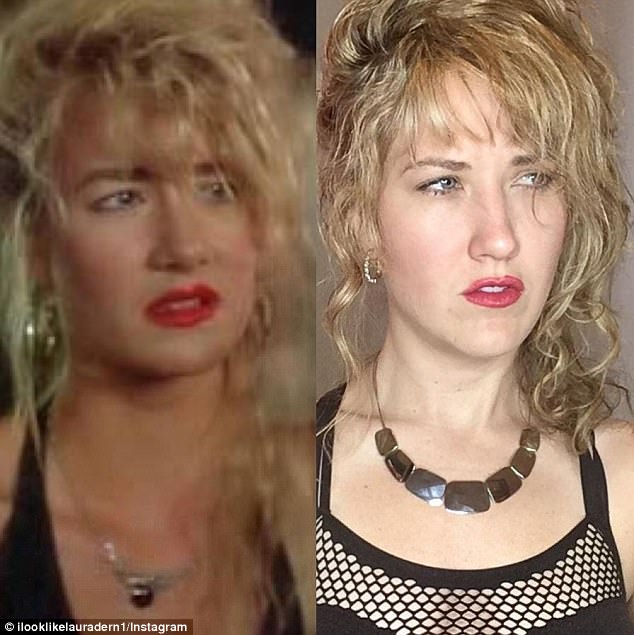 ‘Laura Dern is out there winning an Emmy. I’m just here trying to win a break up. CONGRATS @lauradern!’ she captioned the side by side images.

‘You are literally Laura’s doppelganger,’ one commenter wrote, while another added: ‘You could be her celebrity decoy.’

Like Dern, Wojciechowski has wavy blonde hair, almond-shapes eyes, and an oval face. They also share similarly shaped noses and smiles, making her quite the Dern impersonator.

One of Dern’s most beloved roles is paleontologist Ellie Sattler in Jurassic Park, and Wojciechowski nailed her recreation of her early ’90s look. 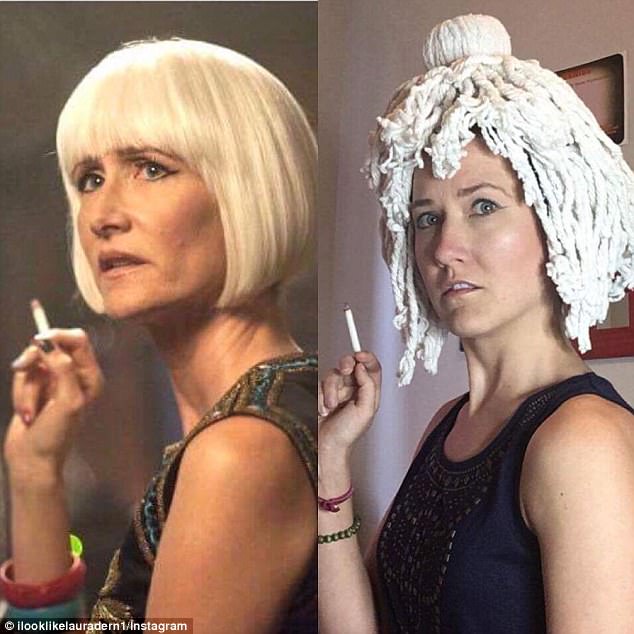 Sense of humor: Instead of rocking a platinum blonde wig to portray Dern’s character in Twin Peaks, she used the top of a mop 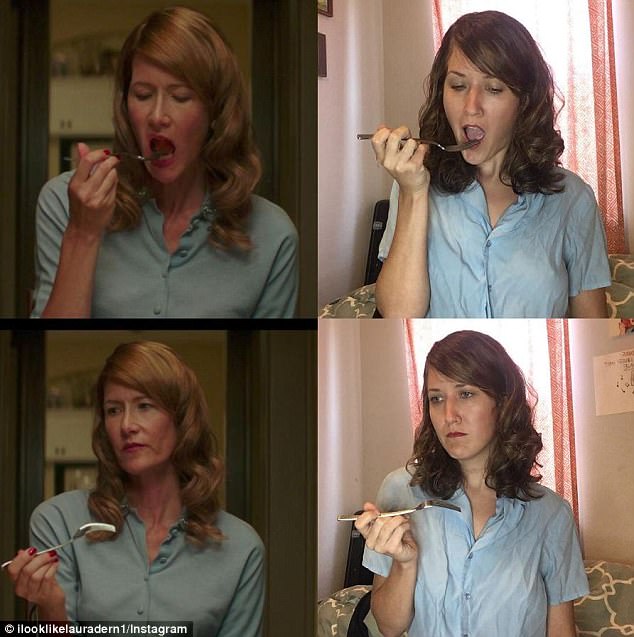 Almost identical mannerisms: Wojciechowski found inspiration in a scene in The Founder where Dern is eating 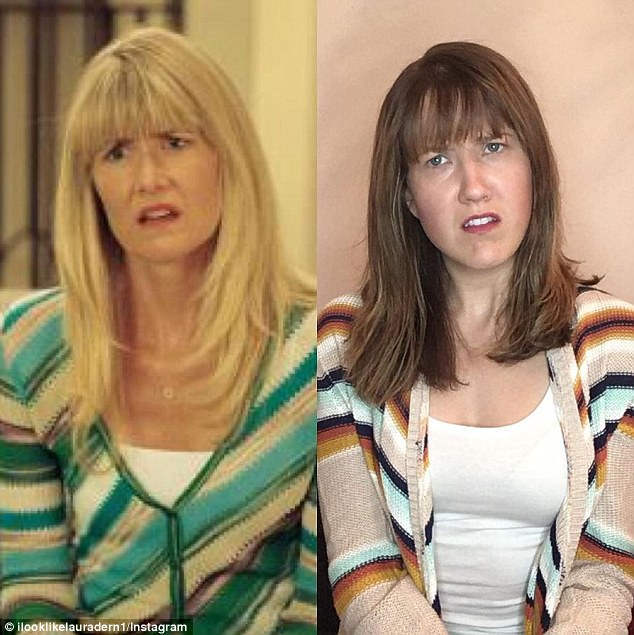 Long lost relatives? Wojciechowski, who is pictured recreating a scene from Year of the Dog, has certain facial features that are strikingly similar to Dern

In her photo, Wojciechowski is wearing a salmon-colored button-down open and knotted at the waist, revealing her blue shirt underneath.

She completes her safari-inspired look with high-waisted khaki shorts and a sturdy brown belt similar to the ones Dern wore in the hit film.

Wojciechowski perfectly models Dern’s pose and the quizzical expression on her face. However, part of the appeal of her Instagram page is her humorous captions.

‘When your ex unfollows you on Instagram and suddenly starts liking all of your friends’ pictures,’ she wrote of the side by side images. 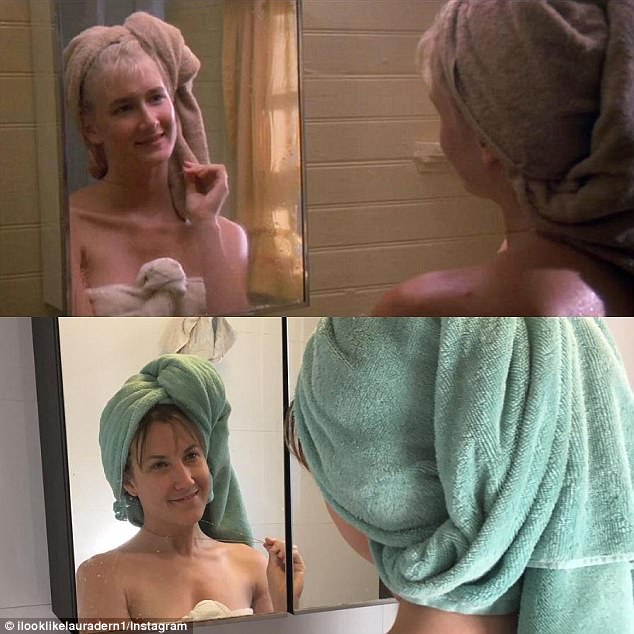 Getting creative: Wojciechowski imitated a young Dern in a scene from her 1985 film Smooth Talk 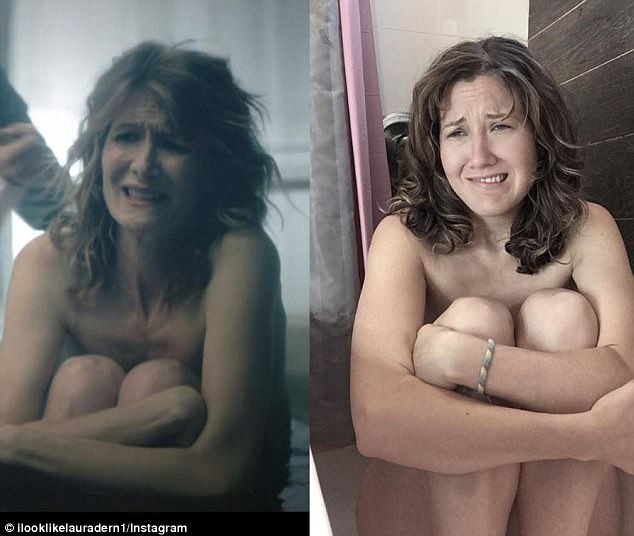 Drama: Wojciechowski has even spoofed Dern’s appearance on Drunk History in which she portrayed journalist Nellie Bly

Wojciechowski’s Instagram photos are inspired by a mix of recent images and some classic throwbacks, including stills of Dern in movies such as Wild at Heart, The Founder, and Year of the Dog.

She also took on Dern’s character Diane in Showtime’s Twin Peaks reboot, but instead of rocking a platinum blonde wig, she used the top of a mop.

Wojciechowski has even spoofed Dern’s appearance on Drunk History in which she portrayed journalist Nellie Bly.

Inspired by an image from the episode that sees Dern naked and hugging her knees, she replicated the scene in her own shower.

‘When your friends want to divide the check evenly, but all you got was a side salad,’ she captioned the photos.