Lauren Duggar tells Josiah on Father’s Day: ‘I’m so proud our children have you as their daddy’

The couple is expecting once again, and is due to welcome a baby in November — just over a year after Lauren was crushed to lose her first pregnancy at just a few weeks along.

Still, the expectant mother referred to both the fetus in her womb and the embryo she lost in her post, writing: ‘Happy 1st Father’s Day honey! I’m So proud our children have you as their daddy!’

First: Lauren Duggar wished a happy first Father’s Day to her husband Josiah, posting this picture of the 22-year-old touching his own belly

‘Happy 1st Father’s Day honey! I’m So proud our children have you as their daddy!’ she wrote, referring to both the fetus in her womb and the embryo she lost

In this one, Lauren cradles her small pregnant belly in a yellow dress, while Josiah sticks out his own tummy and rests a hand on it, giving the camera a humorous look.

Lauren has used similar language in referring to her ‘children’ before. When they announced that they were expecting, they wrote: ‘We are so excited to announce that baby #2 is on the the way!!!!’

The caption went on: ‘It’s hard to fully express just how grateful we are for God blessing us again with another precious gift! 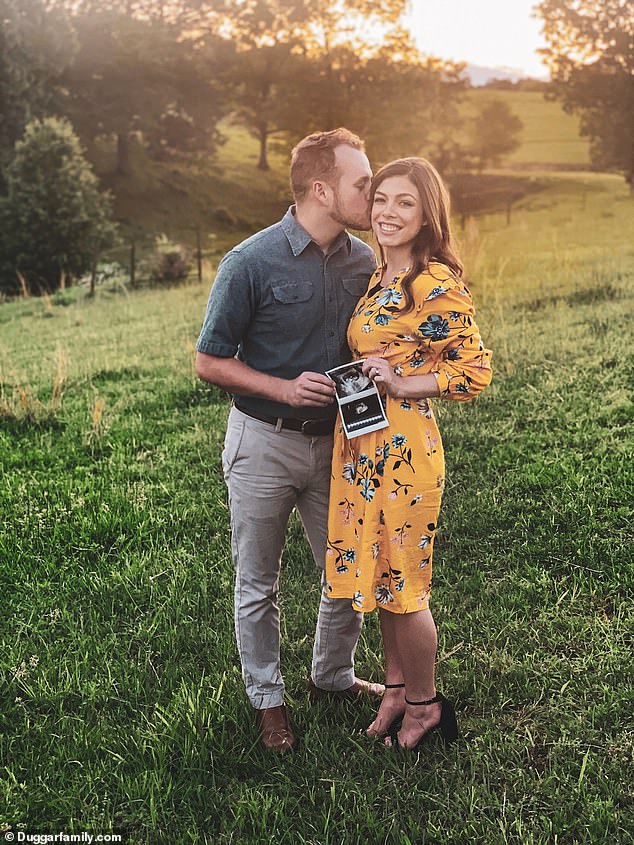 Inevitable announcement: The couple revealed on May 20 that they are expecting ‘baby number 2’ 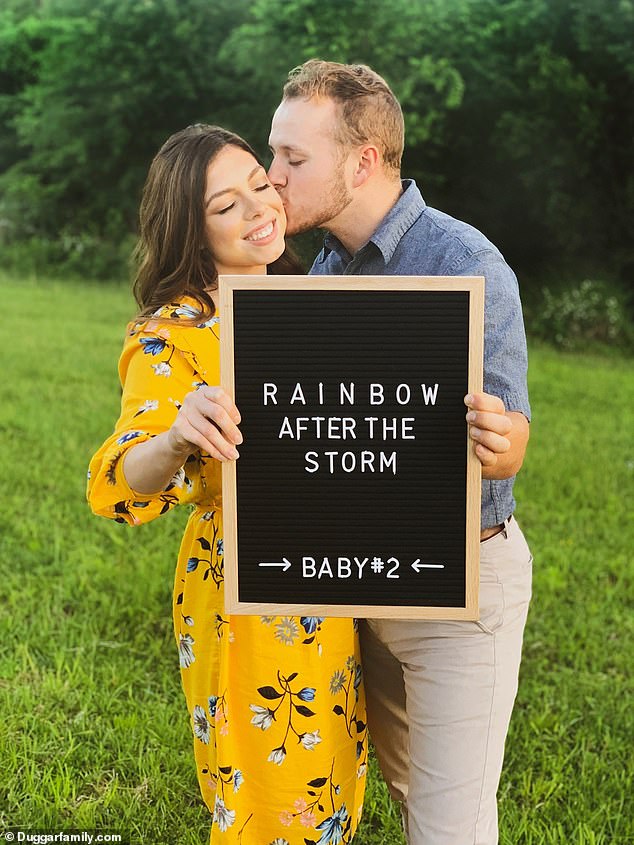 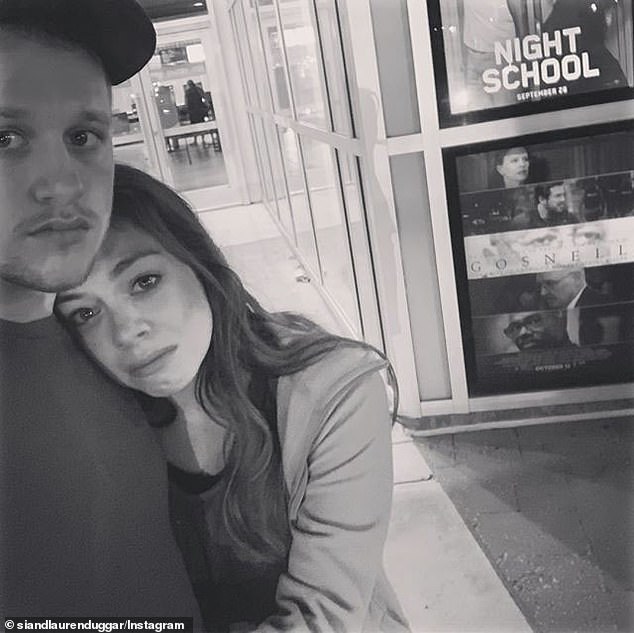 Missed: Lauren (pictured after seeing a sad movie) has cried on camera discussing the loss 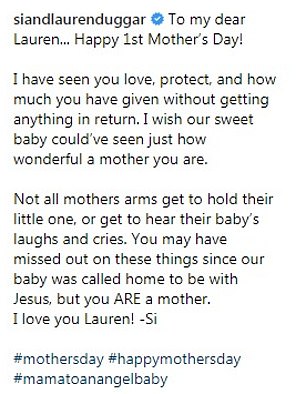 Mother’s Day: In May, before announcing that they were expecting again, Josiah wrote that Lauren is a mother despite not having a baby

‘So, as we rejoice of the life of our second sweet baby, we also remember (balloon as symbolism) our other sweet baby, Asa, in heaven. God is so incredibly good!’

Josiah also wished Lauren a happy Mother’s Day earlier this year, just before they announced that they were expecting again — and referring only to the baby they lost in the post.

‘I wish our sweet baby could’ve seen just how wonderful a mother you are,’ he wrote at the time.

‘Not all mothers arms get to hold their little one, or get to hear their baby’s laughs and cries. You may have missed out on these things since our baby was called home to be with Jesus, but you ARE a mother.’ 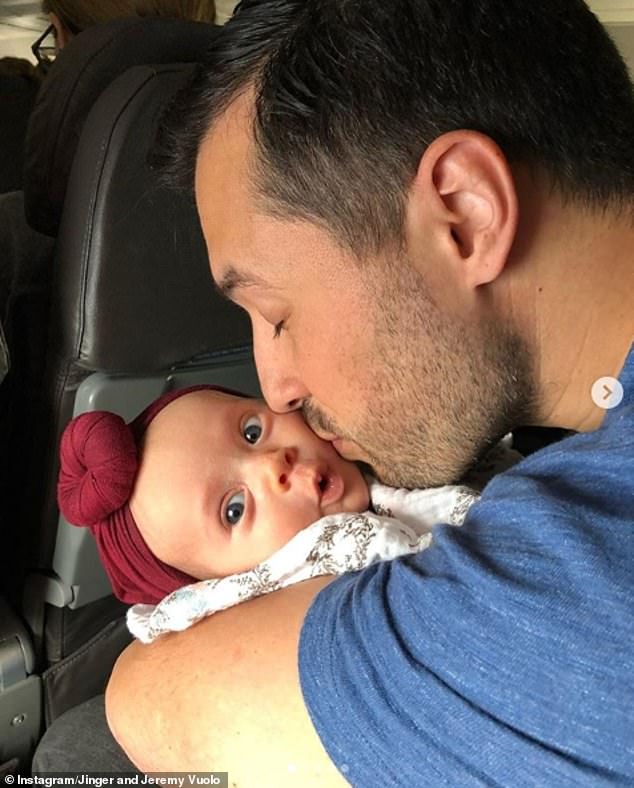 PDA: Jinger wished her husband (and her dad and father-in-law) a Happy Father’s Day on Instagram 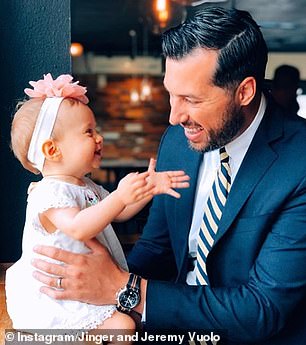 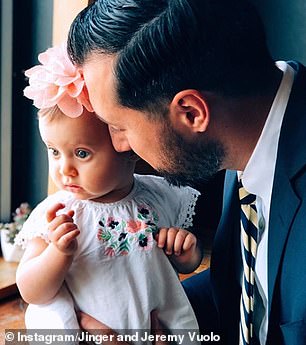 All about me! Jeremy, meanwhile, shared a post for himself, uploading pictures of himself with his daughter Felicity

My dad: ‘This morning, my daughter told me, “Happy Father’s Day!”…with her smile,’ he wrote 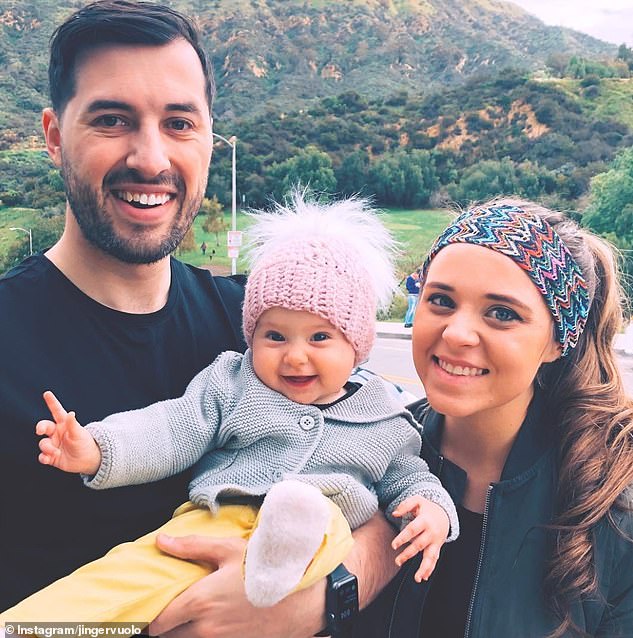 Big news! The couple is moving across the country from Laredo, Texas to Los Angeles, California this summer

Several other members of the Duggar family posted tributes on Sunday as well. Jinger, 25, shared a joint post in honor of her own father Jim Bob, her father-in-law, and her husband Jeremy Vuolo. 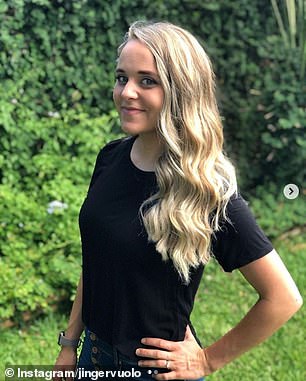 ‘Happy Father’s Day to these incredible men!’ she wrote.

Meanwhile her husband Jeremy also shared a post for his dad and father-in-law — but then shared another post in his own honor.

‘This morning, my daughter told me, “Happy Father’s Day!”…with her smile,’ he wrote, posting two photos of himself with daughter Felicity.

Meanwhile, 28-year-old Jill also posted twice for the holiday, first paying tribute to her husband Derick Dillard and her father.

‘Happy Father’s Day to these 2 wonderful men! Y’all are the best!’ she wrote.

Later, she posted yet again, sharing images at Derick’s father’s grave with her children and her in-laws.

‘It was so special getting to visit my father-in-law’s grave today and take new flowers (thanks mom!),’ she wrote. 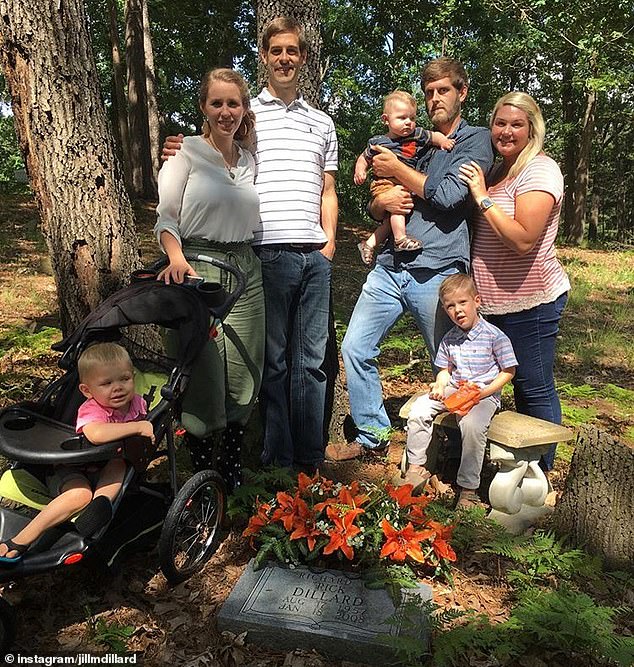 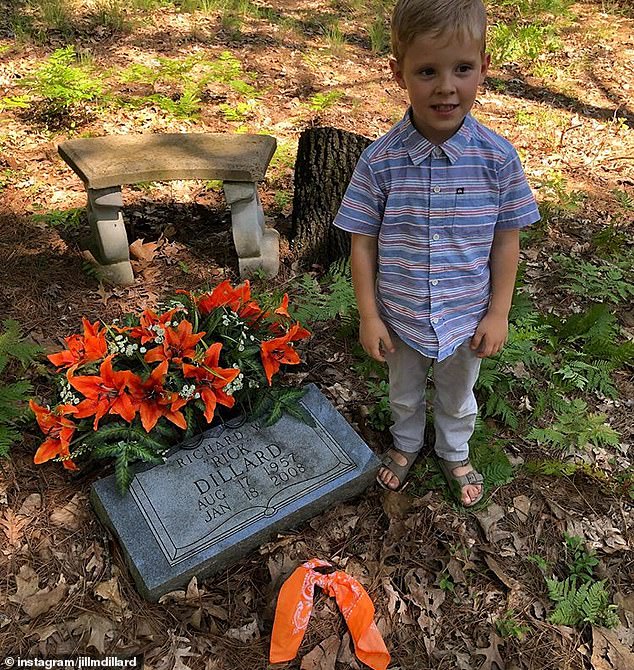 #Deaddad: She captioned it with an upbeat, emoji-filled message that included plenty of exclamation points and hastags

‘He was an amazing man who helped raise the man of my dreams! [heart emoji] Israel wanted to leave an orange handkerchief there for his grandpa too, so we put a stick in the ground and tied it on there. We miss you dad! [double heart emoji] 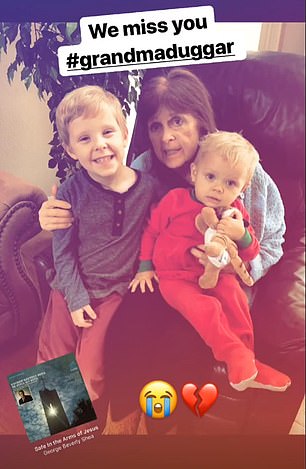 Is this a joke? The 28-year-old came under fire last week for using lots of emojis in a post about her grandma, who’d died by drowning the day before

‘Father’s Day is hard for those who have lost theirs [flower emoji]’ she concluded, adding the hashtags #rip, #rickdillard, #policeofficer, #lawenforcement, #father, and #grandpa.

Jill’s use of exclamation points, hashtags, and emojis in a memorial post have led to backlash recently.

The mother-of-two had shared a similarly upbeat and emoji-packed tribute to her grandmother on Monday, June 10, just a day after the 78 year old fell in a pool and drowned.

Jill followed up that post with another one in which she promoted a blog entry about her grandmother, which several critics slammed as tone-deaf, immature, and insensitive.

Jana, the only unmarried Duggar over the age of 20, still lives at home, taking care of the house and her siblings.

‘Happy Father’s Day to the most wonderful Dad in the whole WORLD!’ she wrote. 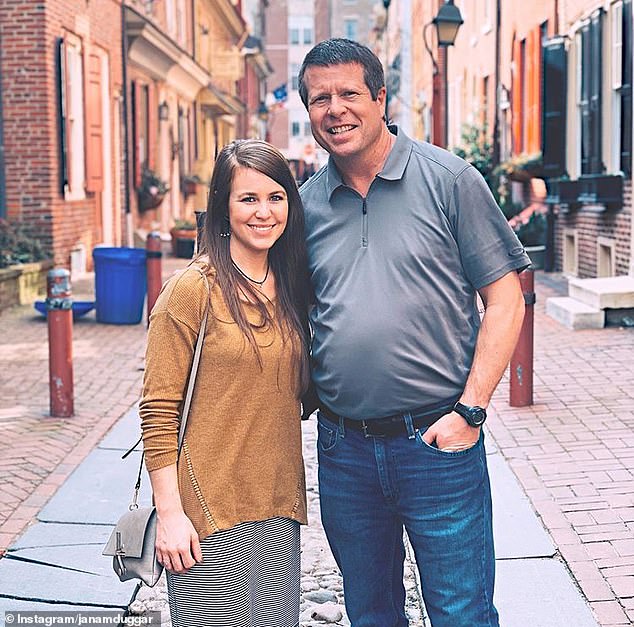 Oldest Duggar daughter Jana, who is unmarried and thus still lives at home and doesn’t work, posted about her dad

‘My Dad is the one who has taught me so many skills — from tiling floors, basic plumbing & electrical, painting, and car maintenance, to how to get the best deals.

‘He taught me how to drive, helped me buy my first car, and has let me try my hand at design on his different real estate projects… even if it means spending a little more time and money to correct something I’ve messed up on (sometimes we learn by trial and error). 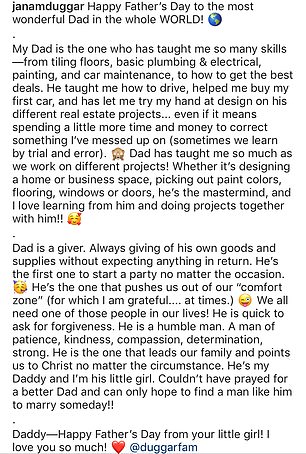 She wrote: ‘Couldn’t have prayed for a better Dad and can only hope to find a man like him to marry someday!’

‘Dad has taught me so much as we work on different projects! Whether it’s designing a home or business space, picking out paint colors, flooring, windows or doors, he’s the mastermind, and I love learning from him and doing projects together with him!!

‘Dad is a giver. Always giving of his own goods and supplies without expecting anything in return. He’s the first one to start a party no matter the occasion. He’s the one that pushes us out of our “comfort zone” (for which I am grateful…. at times.)

‘We all need one of those people in our lives! He is quick to ask for forgiveness. He is a humble man. A man of patience, kindness, compassion, determination, strong. He is the one that leads our family and points us to Christ no matter the circumstance.

‘He’s my Daddy and I’m his little girl. Couldn’t have prayed for a better Dad and can only hope to find a man like him to marry someday!!

‘Daddy—Happy Father’s Day from your little girl! I love you so much!’ she concluded.

The only adult Duggars and Duggar spouses not to share posts are latest-to-wed John and Abbie, Joe and Kendra (who have one son and are expecting another child), mother-of-three Jessa, and Anna, who is pregnant with her sixth child by eldest son Josh.

Anna hasn’t wished Josh a happy Father’s Day on Instagram since 2015, just before news broke that he’s been unfaithful and had dating profiles on sites like Ashley Madison, where he listed various sex acts he’d like to do with women other than his wife.