It has been almost one year since Bill O’Reilly exited his post at Fox News after a New York Times expose detailed five sexual harassment complaints made against him during his time at the network which were settled for millions.

O’Reilly did not back down in the wake of his ousting from the cable news network, choosing instead to appear on Today and give statements to Matt Lauer in which he discredited his accusers and said he was terminated because of ‘completely unfounded claims.’

That statement could now cost O’Reilly millions as Laurie Dhue, who was one of the five alleged harassment victims, has filed a lawsuit against him for defamation in United States District Court for the Southern District of New York.

O’Reilly did not respond to a request for comment.

Dhue the right thing: Laurie Dhue (above in 2013) filed a lawsuit against Bill O’Reilly in US District Court on Thursday seeking undisclosed damages and accusing him of defamation 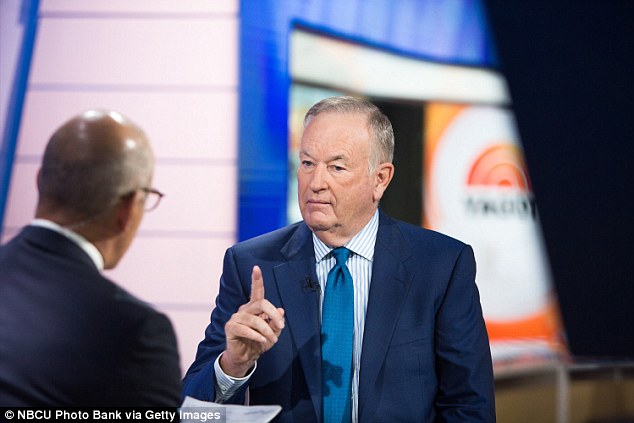 Before the fall: ‘As part of his desperate campaign to clear his name, O’Reilly published false statements about Dhue – as well as the other women,’ reads the complaint (O’Reilly on Today with Matt Lauer last year)

Dhue  is seeking unspecified damages, and previously received a reported $1 million to settle her sexual harassment claim against O’Reilly according to The New York Times.

Four of the five sexual harassment victims who were featured in that first Times story have now filed defamation lawsuits against O’Reilly.  There was a sixth  woman who accused O’Reilly of general harassment in that piece as well last year.

A seventh women was later revealed to have been paid $32 million settlement after making claims of sexual assault against O’Reilly.

‘As part of his desperate campaign to clear his name, O’Reilly published false statements about Dhue – as well as the other women – calling her a liar, swearing that her allegations were fabricated in an effort to obtain a settlement, falsely asserting that her purported claims against O’Reilly were politically motivated, and lying by saying that he only paid settlements to avoid having his family go through litigation, not because he had engaged in the claimed sexual misconduct,’ states Dhue’s complaint.

She goes on to claim that this resulted in ‘a satire of the alleged settlement between Dhue and O’Reilly on NBC’s Saturday Night Live in April’ as well as her name being ‘indirectly mentioned’ on John Oliver’s HBO show Last Week Tonight.

The complaint also states that Dhue was featured in an ad for an erectile dysfunction pill alongside O’Reilly as a result of his statements.

‘All of the statements made by O’Reilly were made with malice as the intent of making such statements was to destroy Dhue’s reputation—along with the other women’s reputations he defamed—in order to bolster his own reputation, the only way O’Reilly could attempt to salvage his reputation,’ reads the complaint.

It then details how this was damaging to Dhue and the other women.

‘O’Reilly lied in each of these statements, and caused Dhue and the other women further harm to their reputations. Dhue, who still does some work in the news media, but focuses primarily on her role as an advocate for recovery from drug and alcohol addiction, relies on her reputation for truthfulness and trustworthiness to support her career,’ states the complaint. 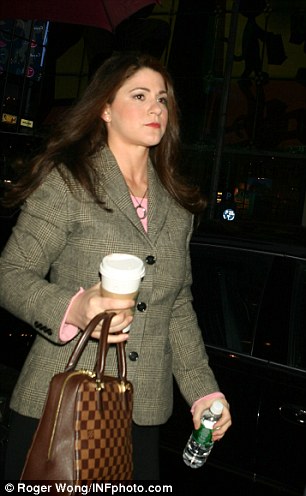 The three women sued O’Reilly for defamation over his comments suggesting that they were political operatives hell bent on taking him down as well as liars whose only goal was extortion.

Bernstein complained about O’Reilly’s harassing behavior to human resources back in 2002 and received a small payout that was far less than the other five known women whom O’Reilly settled with over the years.

In total, O’Reilly paid over $45 million to six women, including one who was awarded $32 million just last year.

O’Reilly has stated in the past he only settled so the allegations would not play out in public and bring unneeded stress to his teenage son and daughter.

His lawyer responded to the initial defamation filing by pointing out that O’Reilly had never named one of his accusers when speaking about individuals who were out to bring him down.

‘They are tired of being smeared with lies by a bully who thinks that his victims are afraid to answer to them,’ said the lawyer for the women, Nancy Erika Smith.

‘They are standing up for the truth, joining the many voices of brave women who are no longer tolerating abuse or being silenced.’ 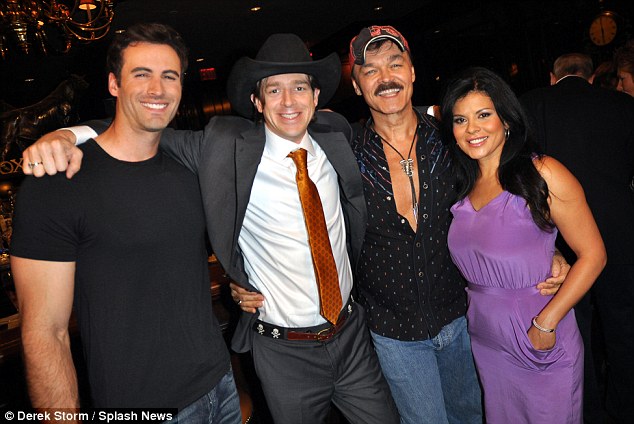 Friends: Dhue is now the fourth women to filer a defamation lawsuit against O’Reilly, joining the three other women she was profiled with last year in the NY Times

It was Mackris’ lawsuit that made headlines when it was settled back in 2004 by the network for a formerly undisclosed sum which in April was revealed to be $9million by The New York Times.

In her complaint, Mackris claimed she had been sexually harassed by O’Reilly and detailed their phone sex conversations in which he allegedly listed off his female conquests.

O’Reilly also allegedly detailed a sex fantasy he had about Mackris using ‘that little loofah thing’ in the shower, but towards the end accidentally called it a ‘falafel thing’.

According to the complaint, O’Reilly called Mackris one night to inform her he was watching pornography and then began to engage in phone sex fantasy about having her come to the Caribbean with him.

‘So anyway I’d be rubbing your big boobs and getting your nipples really hard, kinda’ kissing your neck from behind … and then I would take the other hand with the falafel thing and I’d put it on your p***y, but you’d have to do it really light, just kind of a tease business,’ said O’Reilly according to court papers filed by Mackris.

When the two reached a settlement a statement was released from both parties that said ‘no wrongdoing whatsoever’ occurred while Mackris worked with O’Reilly.

She was also not allowed to speak about the suit in public before or after the settlement, while O’Reilly was able to say that Mackris’ complaint was ‘the single most evil thing I have ever experienced’ to his millions of viewers.

Mackris was also written about negatively in a number of articles at the time. 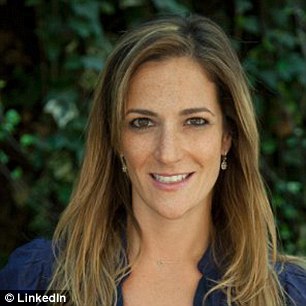 It was seven years until the next woman received a settlement, with Diamond being handed an unknown amount from O’Reilly himself according to multiple sources after confronting him with a recording of comments he had made to and about her while she worked as a host on the Fox Business Network show ‘Happy Hour.’

The payout was so secretive that 21st Century Fox was not even aware of the what had transpired between the two parties until last year, when it was revealed during an internal investigation into sexual harassment claims being brought against Ailes.

Laurie Dhue, who worked as a reporter on the television show Geraldo at Large and was the host of Fox Report Weekend for eight years between 2000 and 2008 also received a payout after accusing Ailes and O’Reilly of sexual harassment.

She received $1million over the summer from the network, shortly after she announced her plan to write a tell-all book.

Fox News also settled with Huddy for $1.6million back in September of last year after she claimed that O’Reilly had tried to pursue a sexual relationship with her while she appeared on the network as a guest on his show.

Huddy stated that O’Reilly would repeatedly call her at home in Long Island and once tried to kiss her, which caused her to fall over as she pulled away from the host.

Soon after she stopped being asked to appear on O’Reilly’s program.

Both Dhue and Huddy’s stories had been reported before, but it was not known Dhue had complained about O’Reilly’s behavior in addition to Ailes.

Bernstein was the fifth woman to speak out in that story. 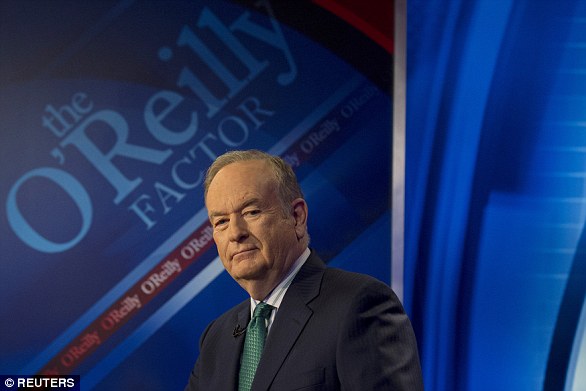 ‘Well if I took you down there I’d want to take a shower with you right away, that would be the first think [sic] I’d do … yeah, we’d check into the room, and we would order up some room service and uh and you’d definitely get two wines into you as quickly as I could get into you I wouldn’t get ’em into you … maybe intravenously, get those glasses of wine into you…

‘You would basically be in the shower and then I would come in and I’d join you and you would gave your back to me and I would take the little loofa thing and kinda’ soap your back and rub it all over you, get you to relax, hot water … and um … You know, you’d feel the tension drain out of you and um you still would be with your back to me then I would kinda’ put my arms – it’s one of those mitts, those loofah mitts you know, so I got my hands in it … and I would put it around front, kinda’ rub your tummy a little bit with it, and then with my other hand I would start to massage your boobs, get your nipples really hard … ‘cuz I like that and you have really spectacular boobs.

‘So anyway I’d be rubbing your big boobs and getting your nipples really hard, kinda’ kissing your neck from behind … and then I would take the other hand with the falafel thing and I’d put it on your p***y, but you’d have to do it really light, just kind of a tease business.’