There is still hope for Roseanne fans.

Multiple sources tell DailyMail.com that a possible spin-off of the show is not out of the question, potentially featuring stars Laurie Metcalf, John Goodman and Sara Gilbert.

One of the sources said that Gilbert is dealing with the cast and crew after the fallout from creator Roseanne Barr’s racist tweet left over 200 people without a job, and will be speaking with writers and producers later this week in a meeting that had already been planned prior to Tuesday.

The second source said that Goodman and Metcalf would be open to filming with one another and Gilbert, provided that the writers and producers could come up with the right idea.

That source added that nothing had been presented to either actor at this time and likely would not be discussed until after Metcalf completed her run in Three Tall Women on Broadway.

Metcalf and Goodman have no upcoming projects at this time due to the fact that they were scheduled to start filming in July.

Reps for ABC and Metcalf did not respond to requests for comment.

Conner comeback: Multiple sources tell DailyMail.com that Laurie Metcalf, John Goodman and Sara Gilbert would be open to talks of a Roseanne spin-off

Star power: Mindy Kaling and Joss Whedon shared their hopes and dreams for Metcalf and Goodman

All three stars will be paid for the 13-episode season regardless of whether or not they film according to The Hollywood Reporter, with their $350,000-per-episode contracts coming out to just over $4.5 million in potential pay.

That is close to $15 million ABC may have to pay for just those three stars, on top of the millions they are set to lose in portential revenue from ad sales.

Meanwhile, Tom Arnold is claiming this could all cost ABC up to $1 billion in lost ad revenue and salaries.

Roseanne and its star had been front and center at the network’s upfronts just a few weeks ago, leading the push to lure in advertisers for ABC.

At that presentation Ben Sherwood, the president of the Disney-ABC Television Group, joked about the star’s Twitter.

‘Take a look at her most recent tweet. It was all her.’

Sherwood then displayed a series of fake tweets from Barr, whose son on Tuesday she would never refer to a black person as an ‘ape.’

That is a lie however, with Barr having called former national security advisor Susan Rice just that in a 2014 tweet.

Roseanne finished the season as the second-most watched scripted program on television according to Nielsen ratings released on Wednesday, trailing behind only NBC juggernaut This Is Us.

And that could change in the coming week when DVR views are factored in, possibly putting Roseanne in the top spot.

Production company Casey-Werner would also be up for a rebooted reboot said the sources, though neither believed that ABC was involved in any discussions at this time, or even open to the idea of the series continuing without Barr. 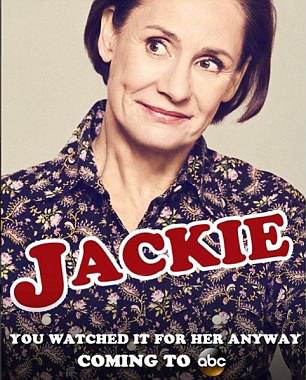 Just Jackie: A fan poster of a |Jackie spin-off has been circulating online

The new season went into pre-production on Tuesday, with the writers reporting to work and learning they were fired after ABC released their statement.

It was a much different writers room this season however with Whitney Cummings, Morgan Murphy and Wanda Sykes all gone.

Prior to the cancellation, Gilbert denounced Barr’s tweet, and made it clear that this latest remark was the final straw.

‘Roseanne’s recent comments about Valerie Jarrett, and so much more, are abhorrent and do not reflect the beliefs of our cast and crew or anyone associated with our show. I am disappointed in her actions to say the least,’ wrote Gilbert.

Barr initially expressed shock and called Gilbert’s remarks ‘unreal,’ but then backtracked and said she harbored no ill will towards the actress who was the driving forced behind the reboot.

Gilbert was spotted shortly after the news broke on Tuesday in Los Angeles getting lunch, while Goodman was seen out walking his dog near his home in New Orleans. 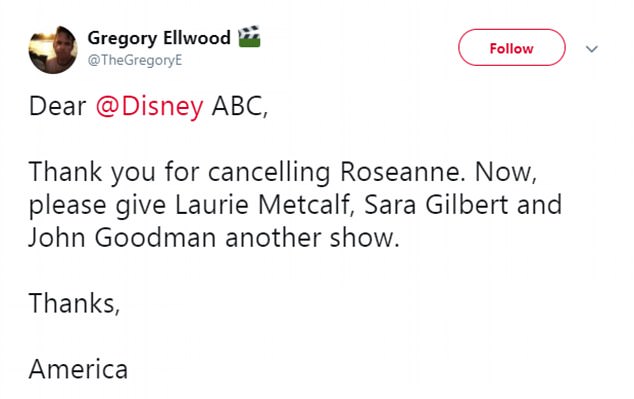 Get it done: A Metcalf spin-off would no doubt bring a great amount of joy to many fans of the show who have been promoting the idea on Twitter ever since news of the cancellation

A Metcalf spin-off would no doubt bring a great amount of joy to many fans of the show who have been promoting the idea on Twitter ever since news of the cancellation.

A poster for the program has already been circulating on social media, with a photo of Metcalf’s character Jackie and the tagline: ‘You watched it for her anyway.’

There has also been a strong push from a number of A-list stars, with Mindy Kaling tweeting: ‘Laurie Metcalf and John Goodman let me write things for you.’ 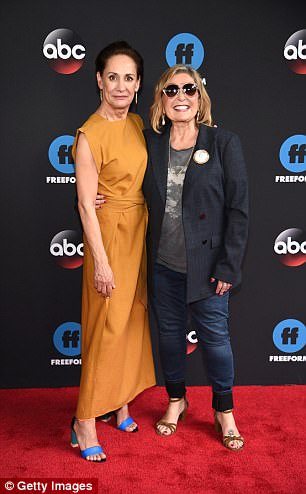 Sisters: Metcalf has not commented on the cancellation (above on May 15 with Barr)

Avengers director Joss Whedon wrote: ‘Excited for the literally anything else that Laurie Metcalf and John Goodman will do now.’

Metcalf’s Getting On co-star Mel Rodriguez also had some ideas, writing: ‘New & improved #Roseanne Pitch @ABCNetwork. John Goodman realizes he’s been gay after all these years & the MACHO BS thing has just been a front. enter me @_MelRodriguez_ PROBLEM SOLVED. #BOOM’

And Producer Jeremy Slater seemed to think there would be no shortage of options for Goodman or Metcalf no matter what they decided, writing: ‘That sound you hear is every showrunner in town frantically rewriting their pilot scripts for John Goodman and Laurie Metcalf.’

Metcalf, who has not yet commented on the cancellation, was back at work Wednesday in New York in her role as ‘B’ in Edward Albee’s Three Tall Women.

It is a role that is likely to score her a second Tony in as many years next month, on the heels of her Oscar nomination for Lady Bird and a possible Emmy this September for Roseanne.

ABC has suspended it’s FYC campaign for the show, but the beloved actress is still a sure bet to score a nomination for her work.

She has won three times in the past, and in 2016 received three nominations for her work in Getting On, The Big Bang Theory and Horace and Pete.