Kilauea’s ongoing eruptions have created a new threat as lava flows reach shore of Hawaii’s Big Island and run into the ocean, creating a cloud of toxic gas known as laze.

The temperature change causes a chemical reaction resulting in small explosions that send hydrochloric acid and tiny particles of volcanic glass into the air.

Stunning video shows the the noxious gas clouds billowing off of Hawaii’s coast as residents are warned of the acid’s corrosive abilities that can cause irritation of the eyes, skin and lungs.

Kilauea’s ongoing eruptions have created a new threat as lava flows hit the ocean, creating a cloud of toxic gas known as laze 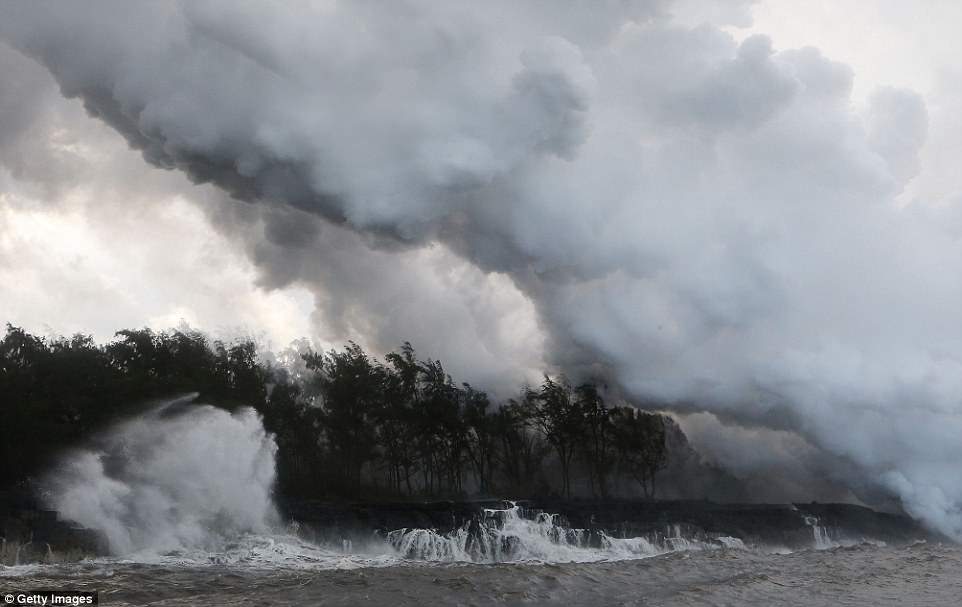 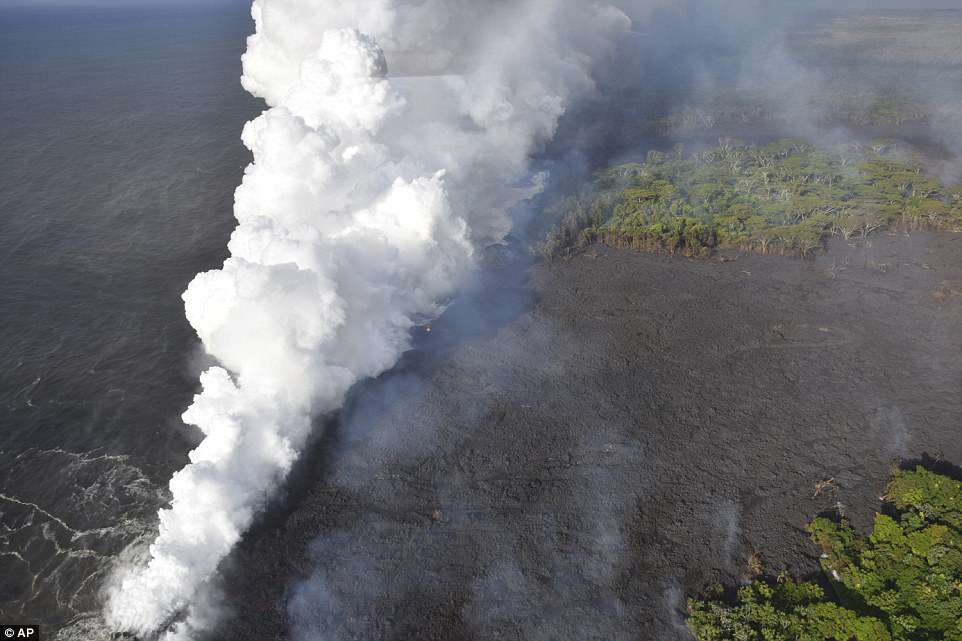 Lava from fissure 20 enters the ocean near Pahoa, Hawaii, on Sunday. The most recent flows are especially fast-moving 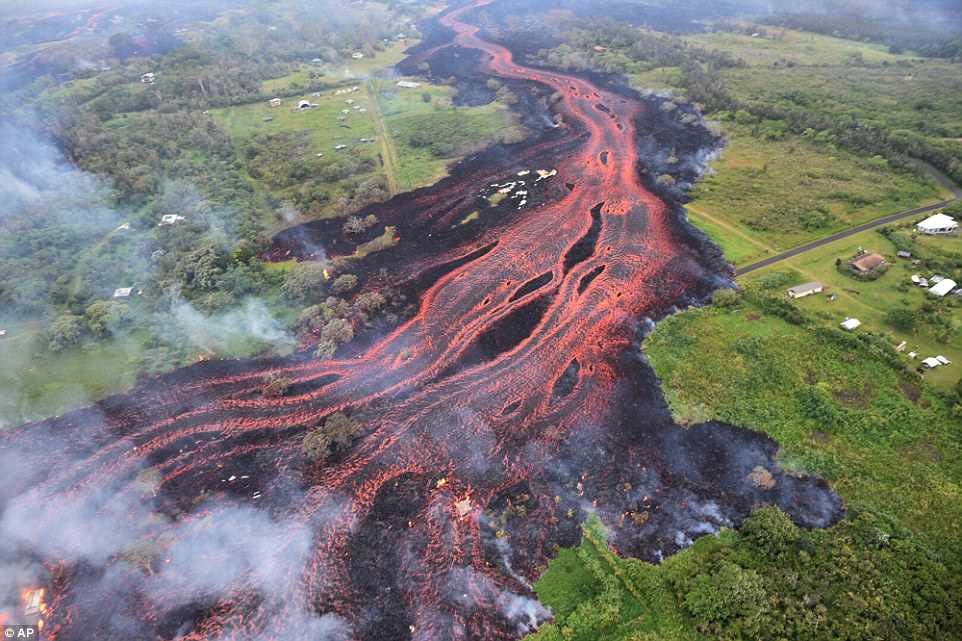 Geologists say the laze is about as corrosive as diluted battery acid, and that once formed it can be blown long distances by the wind.

‘If you’re feeling stinging on your skin, go inside,’ advised US Geological Survey scientist Wendy Stovall.

The Coast Guard has also warned of the threat the clouds pose to mariners.

‘All waterway users should be aware of the hazardous conditions associated with such an event. Getting too close to the lava can result in serious injury or death,’ Lt. Cmdr. John Bannon of the US Coast Guard in Honolulu said in a statement.

So far the laze has traveled an estimated 15 miles (24 kilometers) west of where the lava gushed into the ocean on the Big Island’s southern coast. 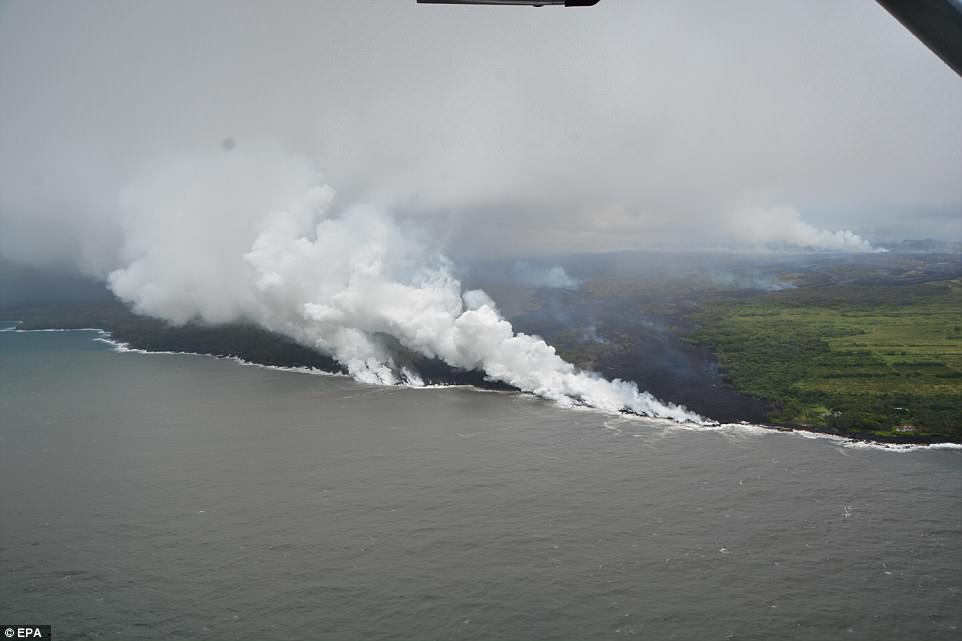 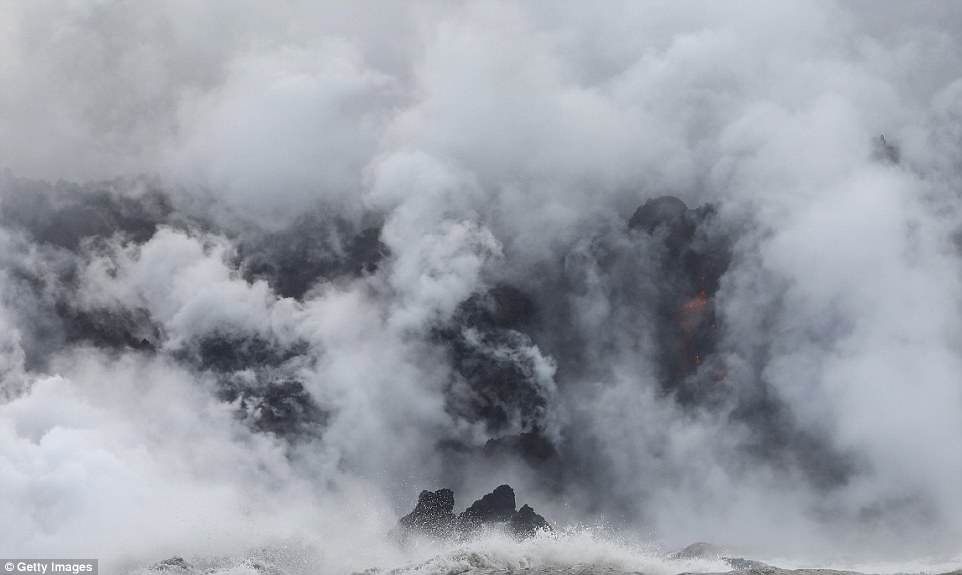 Dramatic photographs capture the billowing clouds created as a wall of 2,000-degree material continues to push into the sea 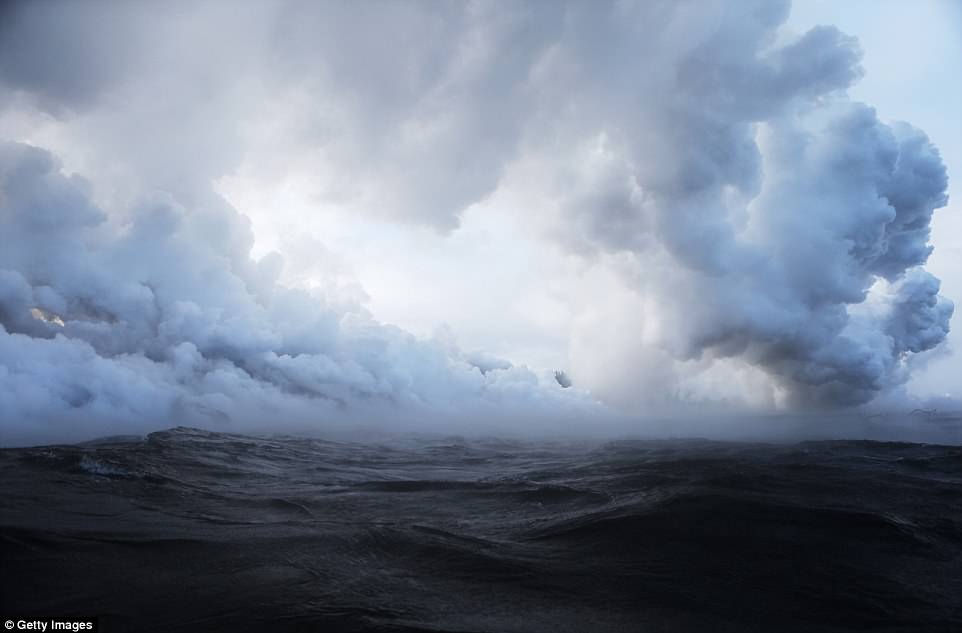 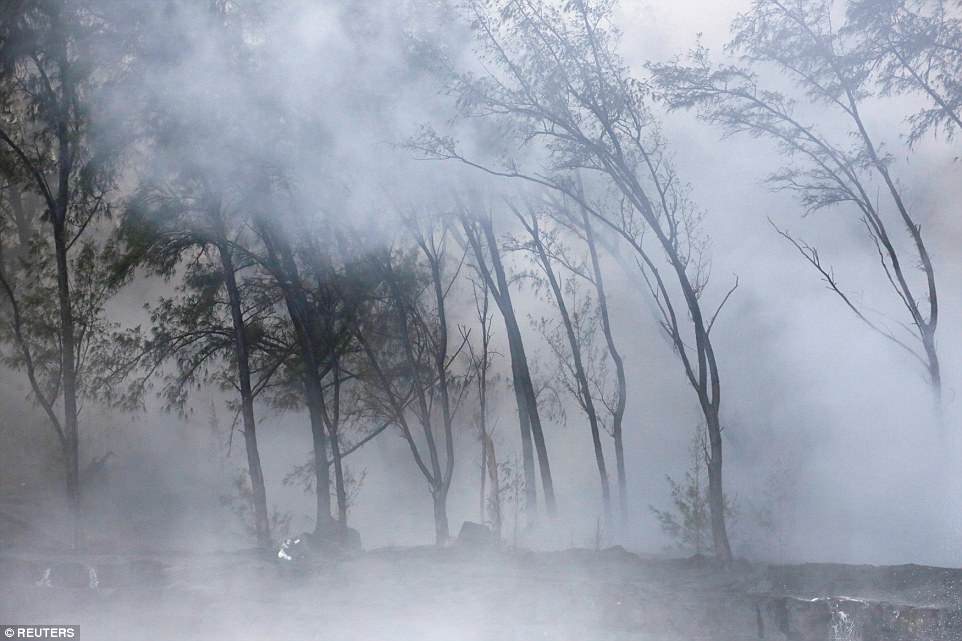 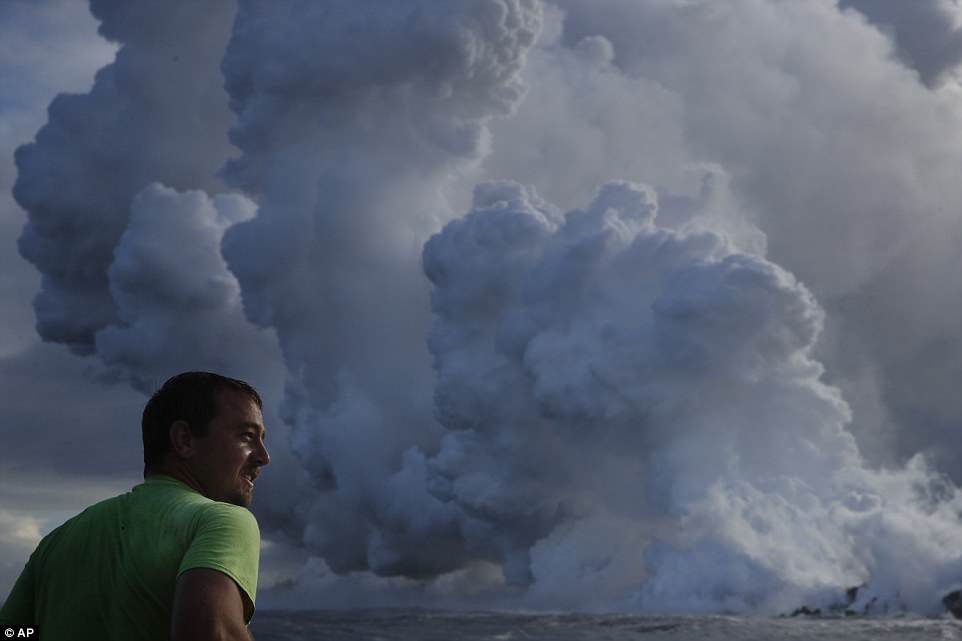 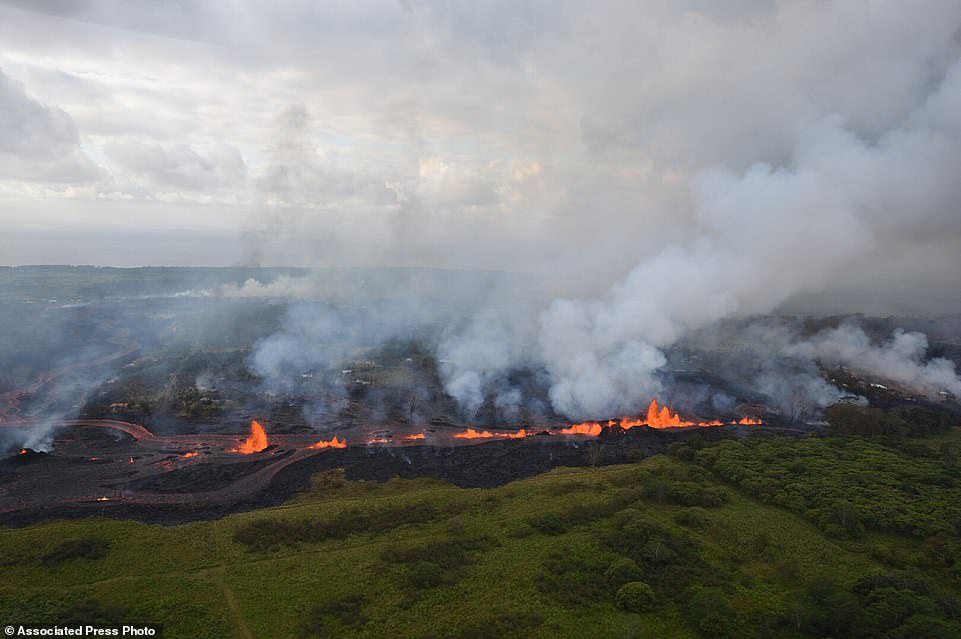 This Saturday aerial photo released by the US Geological Survey shows lava fountains from Fissure 20 in in Pahoa, Hawaii

Kilauea volcano began erupting more than two weeks ago on May 3 and has forced thousands of Hawaii residents to evacuate their homes as lava continues to tear through dozens of structures and sulfur dioxide emissions increase to dangerous levels.

The newest lava flows have been found to move even faster than previous ones, at a rate of about 300 yards per hour, which allows them to travel even further.

The first major injury occurred this weekend when spattering molten rock hit a man in the leg.

The area affected by lava and ash is small compared with the Big Island, which is about 4,000 square miles.

The volcano has spared most of the island and the rest of the Hawaiian chain.

Officials reminded tourists that flights have not been affected, even on the Big Island.

There, travelers are free to do most of the usual sightseeing activities that aren’t associated with the erupting volcano. 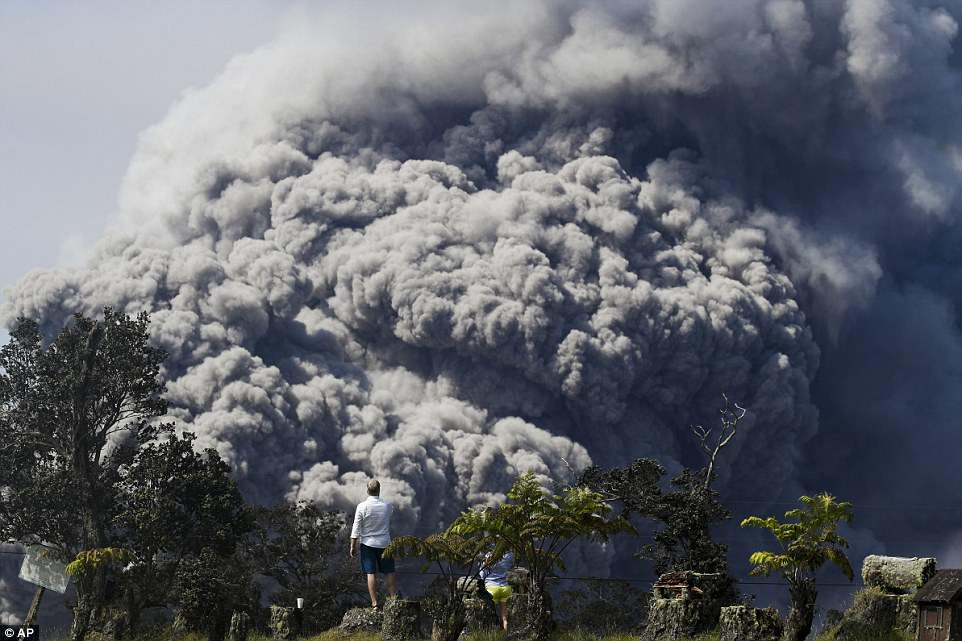 Jack Jones, visiting from Madison, Wisconsin, takes pictures at a country club in Volcano, Hawaii as a huge ash plume rises from the summit of Kilauea volcano on Monday. Tourism on the Big Island has remained relatively unaffected by the eruptions 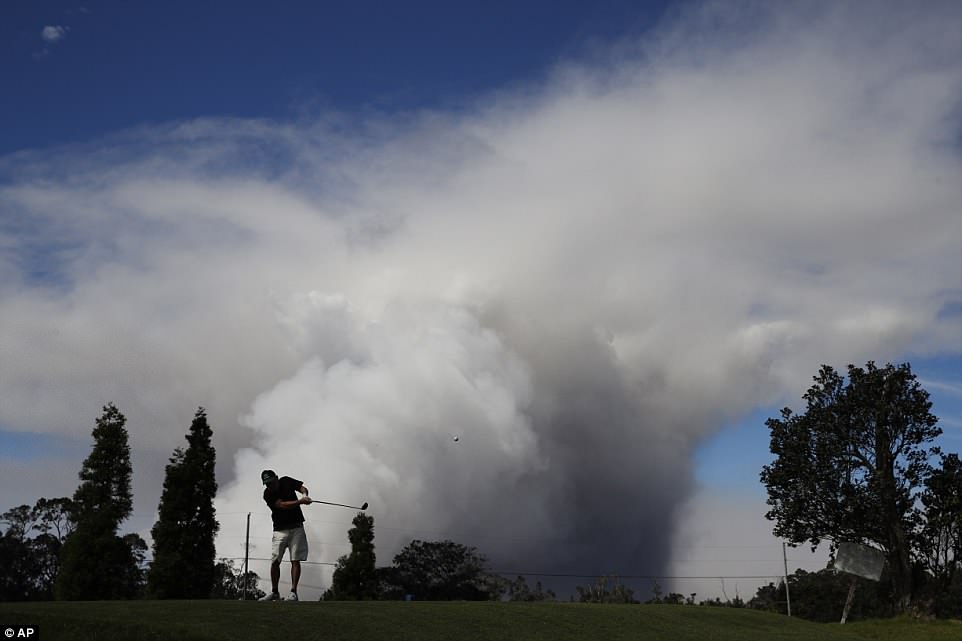 Local resident Mike Walls plays golf in Volcano, Hawaii, as a huge volcanic cloud blooms behind him on Monday 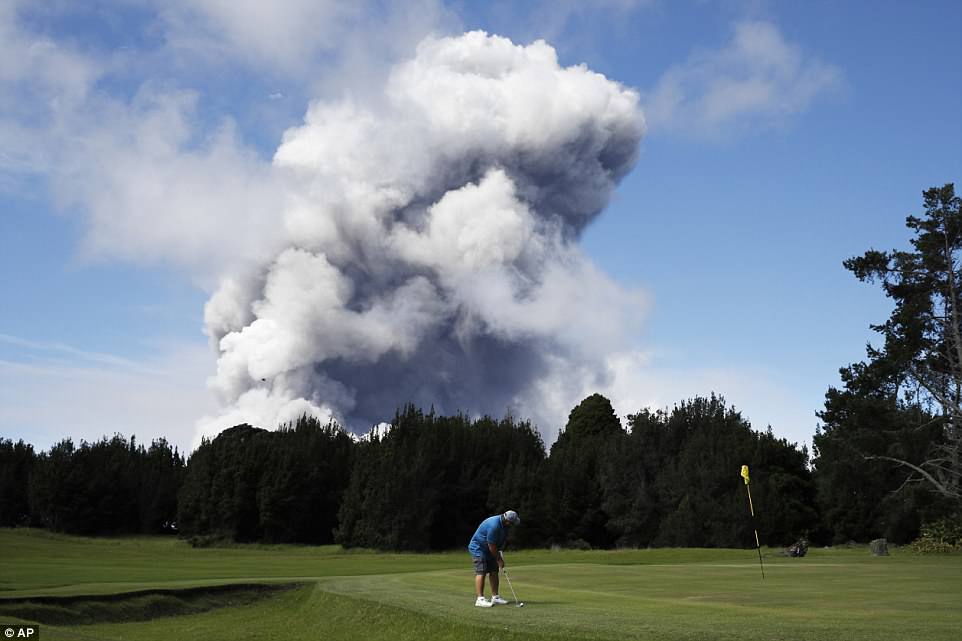 Despite more than two weeks of ongoing eruptions, the area affected by lava and ash is small compared with the Big Island, which is about 4,000 square miles. Doug Ralston is pictured on the golf course in Volcano, Hawaii, on Monday afternoon 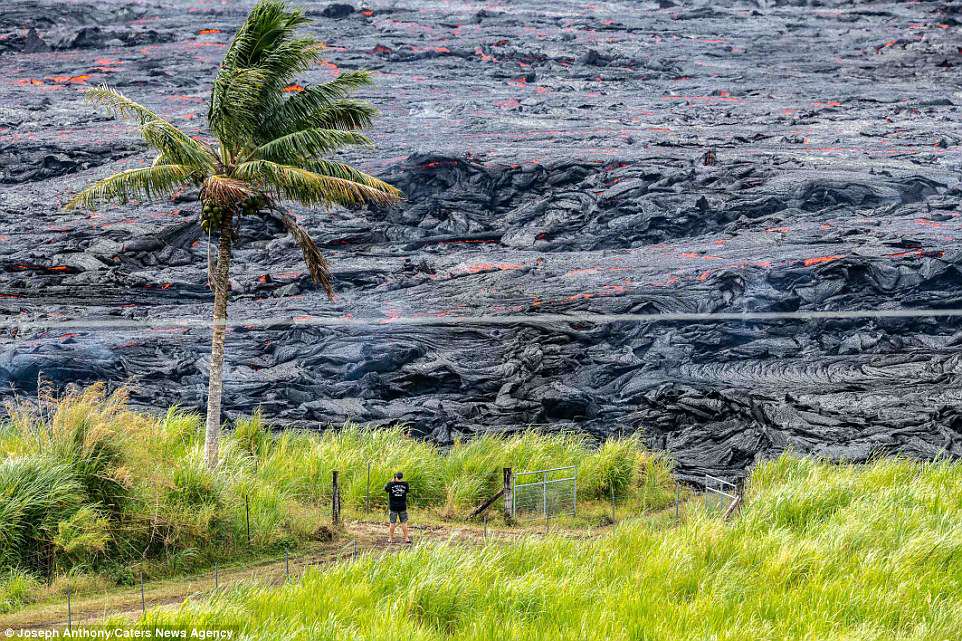 A man wearing shorts, T-shirt and flip-flops takes a picture of a sea of lava on Sunday that has consumed an entire valley 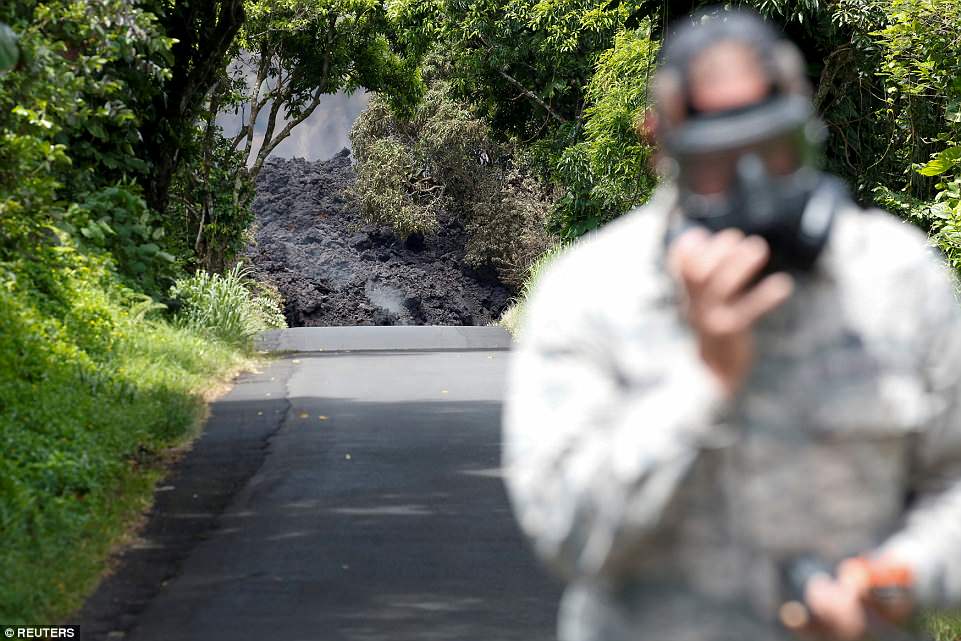 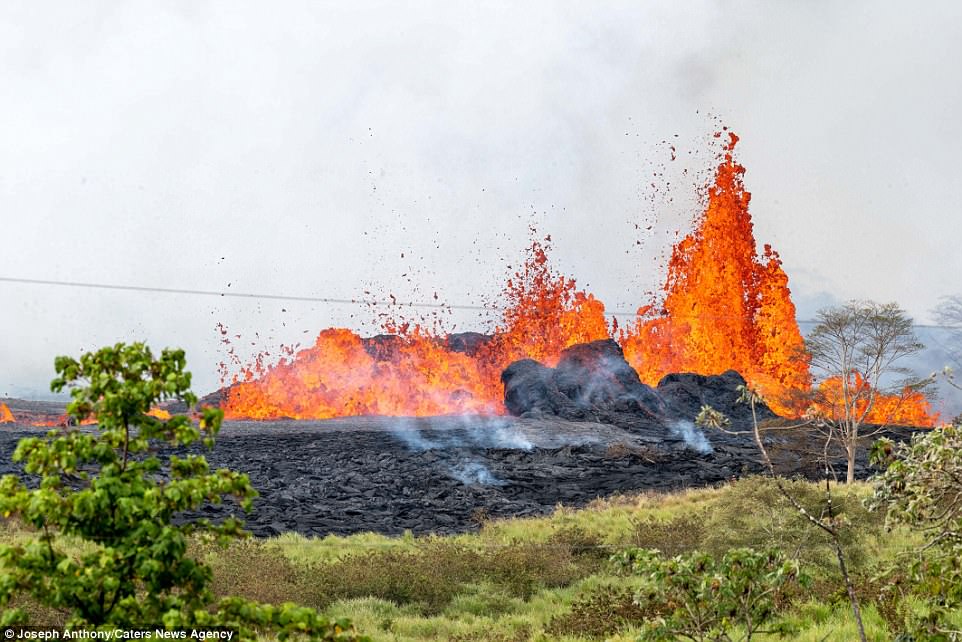 Lava flows have picked up speed in recent days, spattering molten rock that hit a man in the leg, the first major injury to occur 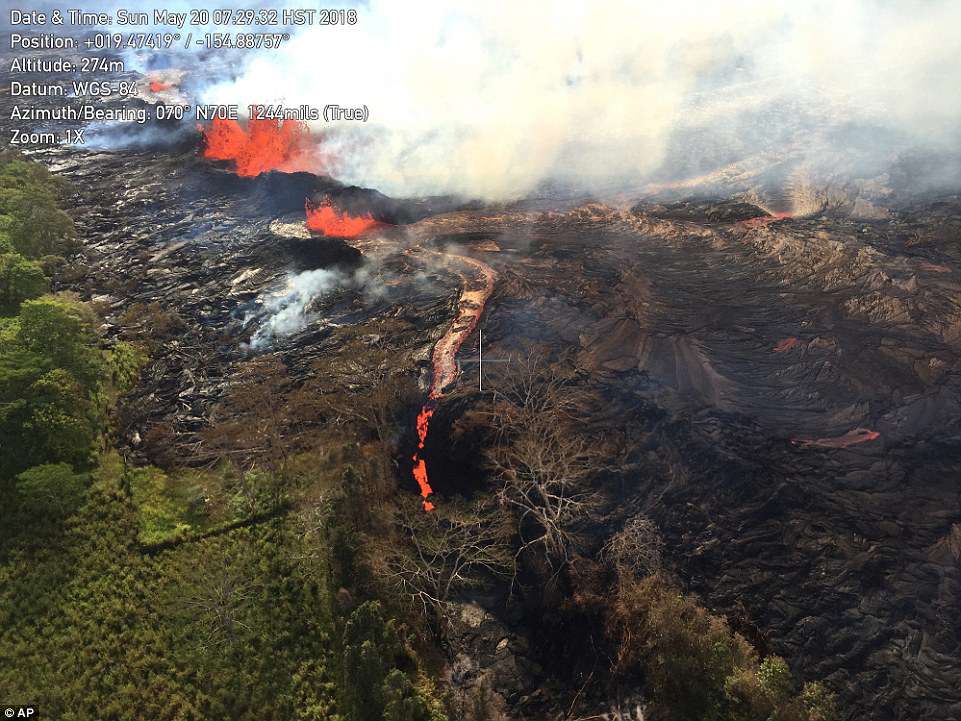 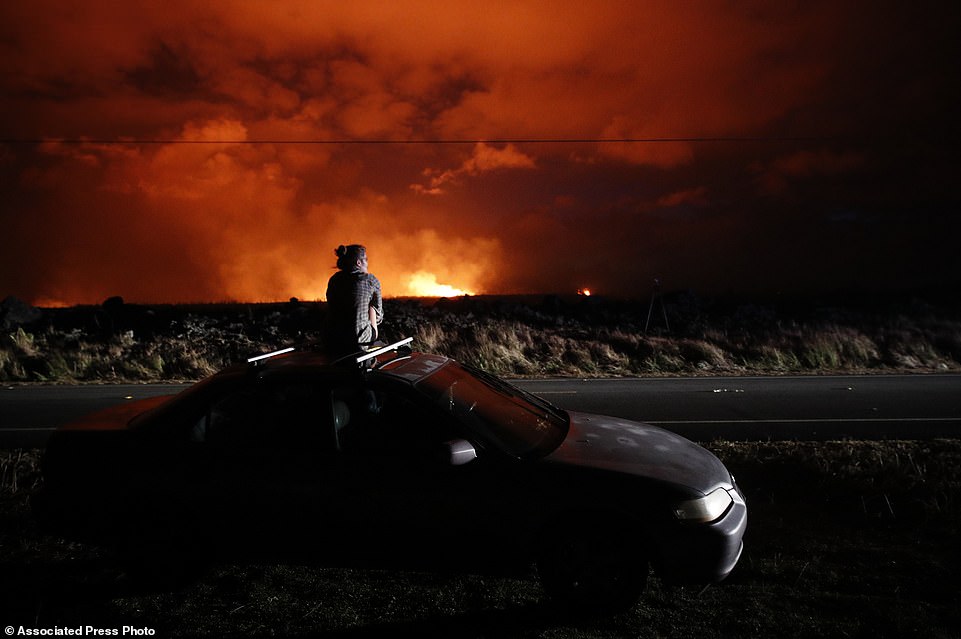 Brittany Kimball watches as lava erupts from a fissure near Pahoa, Hawaii on Saturday. Officials have warned that lava flying through the air from cracks in the Earth can weigh as much as a refrigerator and even small pieces can be deadly