Lava from Hawaii’s Kilauea volcano has created nearly a mile of new land.

US Geological Survey officials said the flow, which has filled Kapoho Bay, is still active and there is no way of knowing when the eruption will end or if more lava-spewing vents will open.

The fast-moving lava poured into low-lying coastal Hawaii neighbourhoods in the space of just two days this week, destroying hundreds of homes.

The eruptions began early last month and is believed to be the volcano’s most destructive episode in modern history.

Lava from Hawaii’s Kilauea volcano that flowed into Kapoho Bay has created nearly a mile of new land. US Geological Survey officials said the flow is still very active and there is no way of knowing when the eruption will end or if more lava-spewing vents will open

‘Lava continues to enter the ocean along a broad front in Kapoho Bay and the Vacationland area and it continues to creep north of what remains of Kapoho Beach Lots,’ said USGS geologist Janet Babb.

As the lava flowed toward the bay, it vaporised Hawaii’s largest freshwater lake, which was hundreds of feet deep in some places.

The new land in Kapoho Bay is now owned by the state, but the peninsula will not look like the farmland that dominates that region of the Big Island anytime soon.

Depending on climate, rainfall and other variables, new vegetation could start growing soon, but it will take much longer for the fertile land and lush rainforests to build back up.

‘How soon vegetation comes back on a lava flow really depends on the type of lava it is, and how much rainfall there is in the area,’ said Ms Babb.

‘There are flows on the Kona side of the island that are much older than some flows on east Hawaii, they are much older but they have far less vegetation and that’s just a reflection of the difference in rainfall.’ 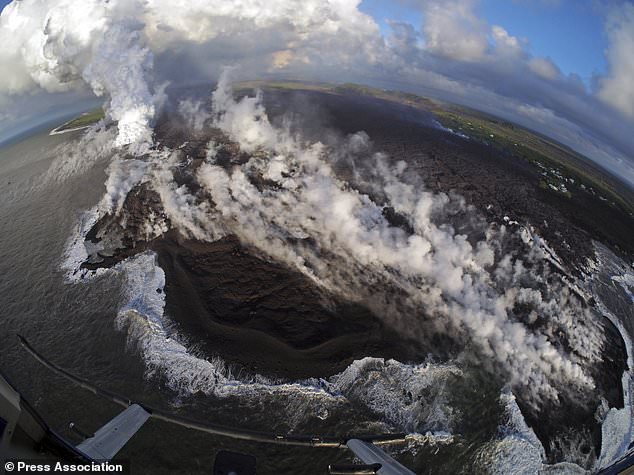 The fast-moving lava poured into low-lying coastal Hawaii neighbourhoods in the space of just two days this week, destroying hundreds of homes 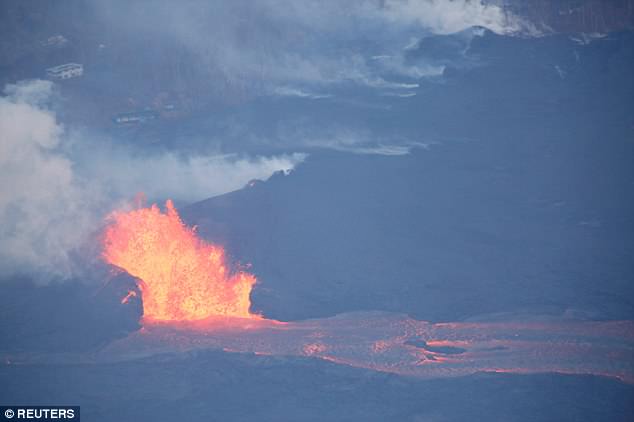 Lava erupts in Leilani Estates during ongoing eruptions of the Kilauea Volcano in Hawaii, on Tuesday, after tearing through the islands 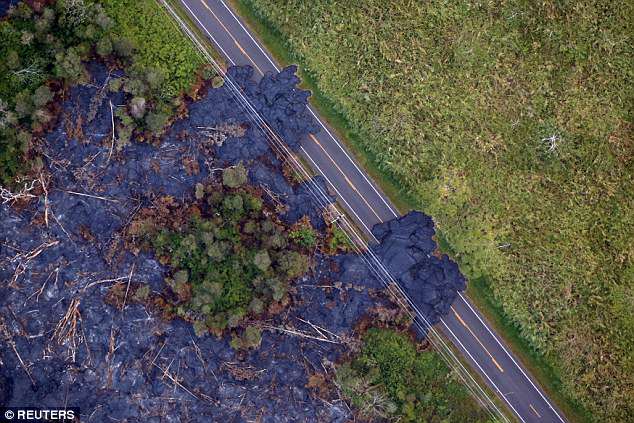 Lava flows across a highway on the outskirts of Pahoa during ongoing eruptions of the Kilauea Volcano in Hawaii. The eruptions began early last month and is believed to be the volcano’s most destructive episode in modern history

WHAT IS THE KILAUEA VOLCANIC ERUPTION?

The Kilauea volcano on Hawaii’s Big Island has been erupting for more than 30 years but bubbled up in May 2018 after the volcano’s summit rose in the weeks leading up.

In recent years the volcano has mostly released lava in hard-to-reach areas inside a national park or along the island’s coastline.

Lava from the bubbling volcano has now destroyed over 40 homes and forced more than 1,700 residents to evacuate.

Researchers have tracked the event since it began but say there is no indication when the destructive lava flow will come to a halt.

This is partly because scientists are still unsure what started the sudden outpouring of lava.

‘A lot of ferns will pop up first. So, it’s usually ohia and ferns that are the first pioneers of those new lava flows.’

But the land is still highly unpredictable, and once the lava cools and hardens it will leave behind a jagged, scorched landscape with razor-sharp shards of volcanic rock.

Any new land masses that are formed by lava within the national park become federal land and any ocean entries outside the park becomes state land. 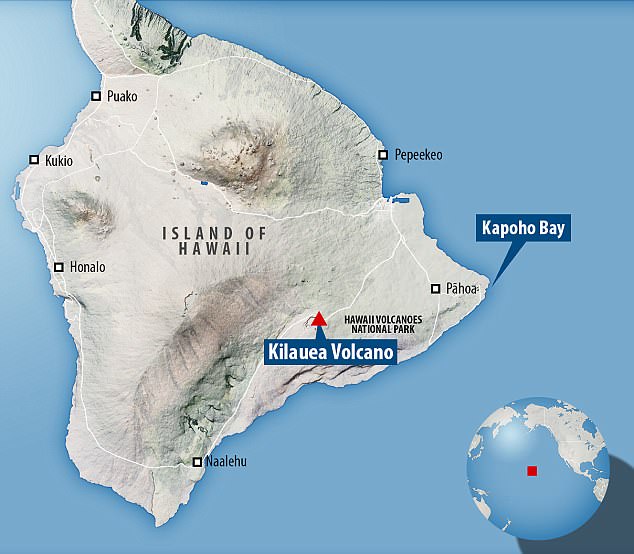 The new land in Kapoho Bay is now owned by the state, but the peninsula will not look like the farmland that dominates that region of the Big Island anytime soon 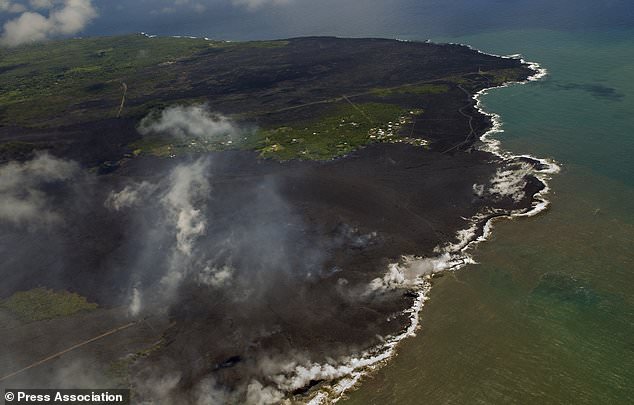 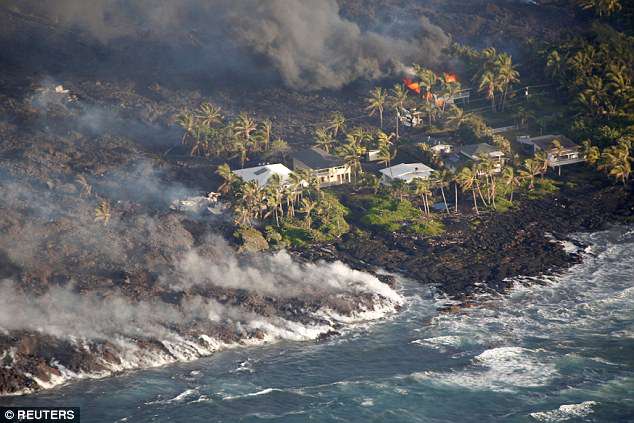 Aerial images captured the devastating lava flows from the Kilauea volcano which destroyed hundreds of homes in one night, including the Big Island county mayor’s second home 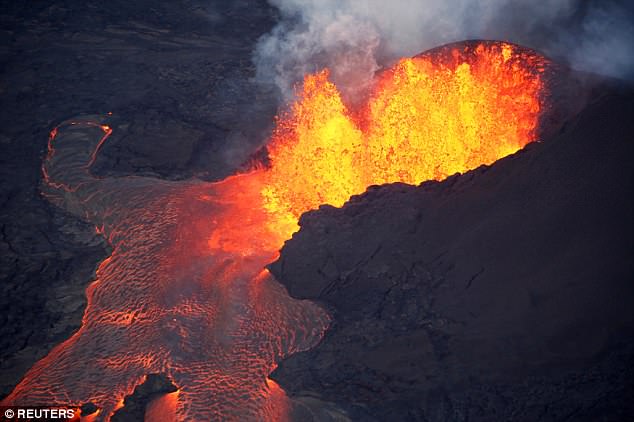 The eruptions have been spewing molten lava, ash clouds and tiny particles of glass as the lava flows reached the sea 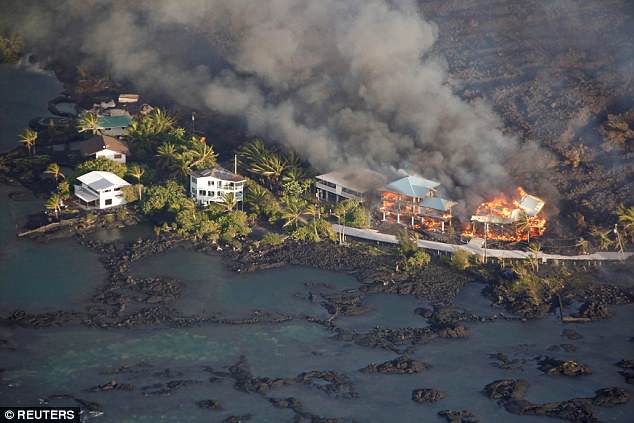 Several homes were still ablaze on Tuesday after lave flows destroyed  hundreds of properties in the Kapoho area, east of Pahoa, during ongoing eruptions of the Kilauea Volcano in Hawaii

‘A lot of the ocean entries are extraordinarily unstable,’ Ms Ferracane said.

‘The bench that was formed during 2016 and 2017 61G flow has already collapsed and fallen into the ocean, so nobody really owns that any longer.’

The lava, which has covered more than 5,000 acres (2023.47 hectares) in this latest eruption is not only expansive, but very thick.

Scientists said that while the height of the lava is variable depending on the source and local topography, much of the area is covered in 10ft-20ft (3m-6m) of lava.

People who have private property in the affected areas will still own their land, though it will need to be reassessed once the lava stops flowing.

There are homes still standing in several subdivisions that have been inundated by lava, but many homeowners are unable to get back to those properties because the lava has already cut them off. 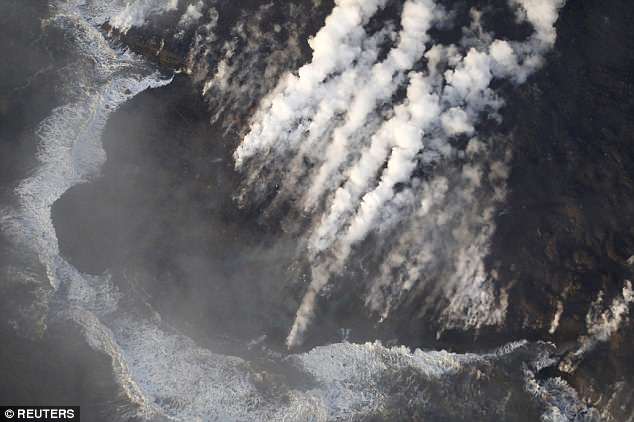 But Janet Snyder, a spokeswoman for Hawaii County on the Big Island, said they believe the number could be much higher – in the hundreds 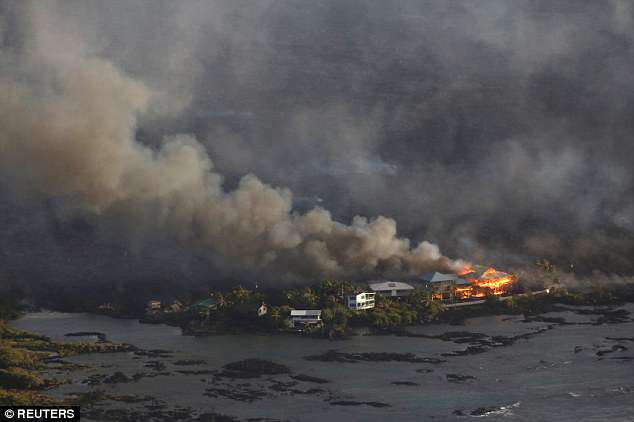 Lava destroys homes in the Kapoho area, east of Pahoa, during ongoing eruptions of the Kilauea Volcano in Hawaii on Tuesday 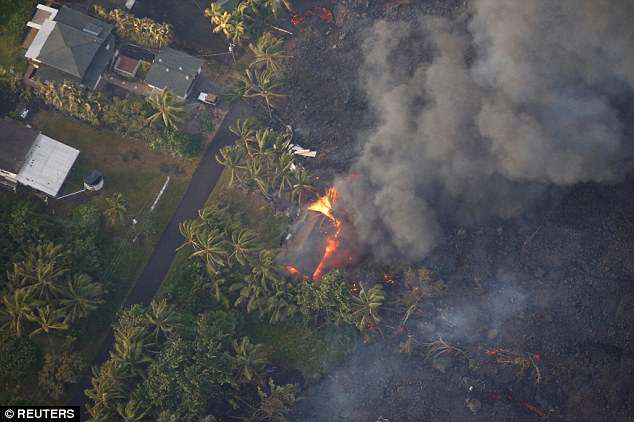 A property, possibly a vacation home, goes up in flames as it is surrounded by lava flows 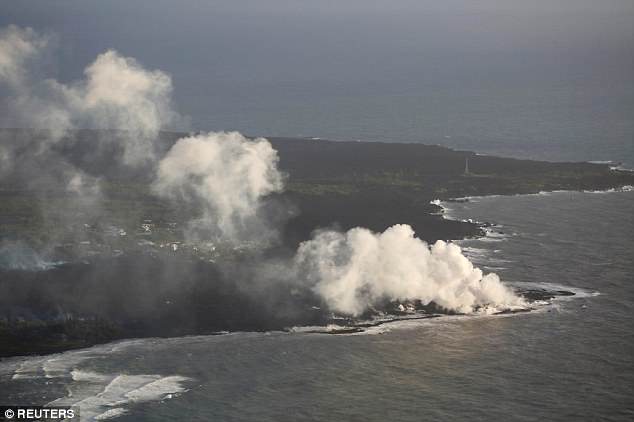 Steam rises from the coast as the boiling hot lava flows meet the sea creating smoke known as laze, which is filled with fine glass particles and hydrochloric acid 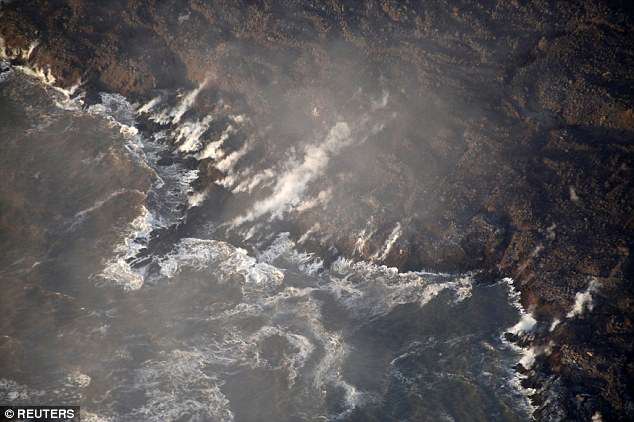 There are no homes left in the Vacationland subdivision and neighbouring Kapoho has only a few homes left standing. They too are cut off and inaccessible.

Earlier this week, it was revealed Hawaii County Mayor Harry Kim’s home was among the at least 159 houses in Kapoho Beach Lots and Vacationland wiped out by lava flows on Monday night.

But Janet Snyder, a spokeswoman for Hawaii County on the Big Island, said they believe the number of homes destroyed that night could be even higher – in the hundreds.

The mass destruction in one night more than doubles the 117 confirmed homes that have been destroyed since Hawaii’s Kilauea volcano began erupting May 3, making it the most destructive day since the eruption began. 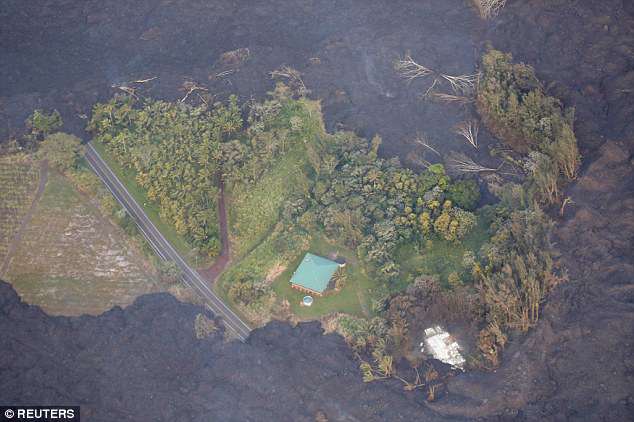 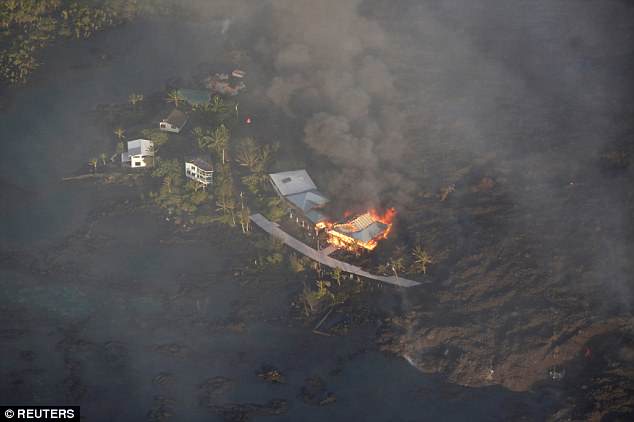 Thankfully, the area had already been evacuated so no injuries or casualties were reported 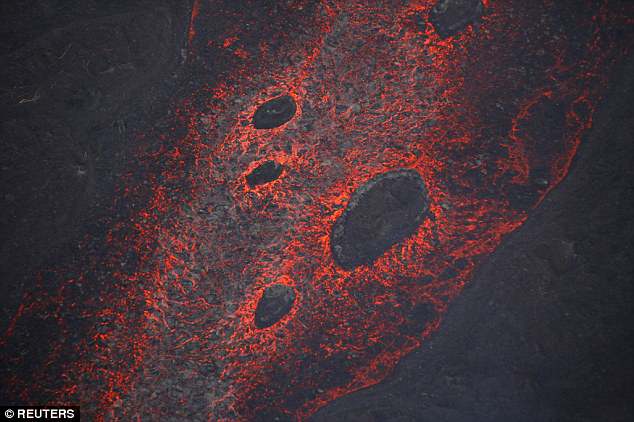 Red hot lava flows, with pockets of rock, floating down the lava. Experts say the eruptions have already wiped out more than 300 homes 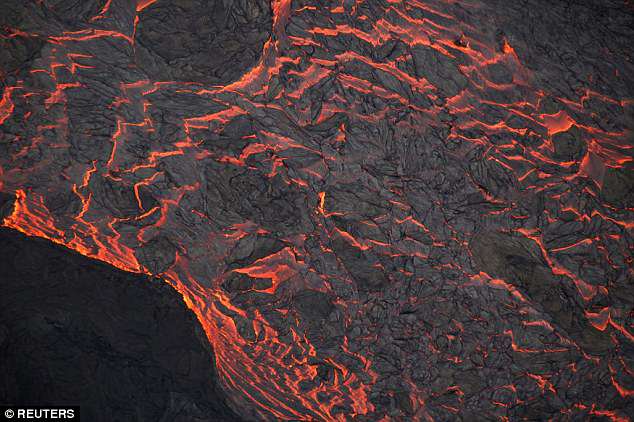 The bright red lava flows in Hawaii can get as hot as 1,165 F, with the temperature of the glowing orange flows reaching more than 1,600 F

‘Harry had a premonition this was going to happen,’ she told the Honolulu Star-Advertiser.

County Managing Director Wil Okabe said his own vacation home in Kapoho Beach Lots was also threatened. Okabe described the area as a mix of vacation rentals and year-round residences.

‘For us it’s more of a vacation area, but for those who live there permanently, they’re trying to figure out where they’re going to be living,’ he said.

But while the volcano is devastating to those who live in the area, it has scientists wide-eyed, eager to advance what’s known about eruptions of this kind.

That’s because volcanoes only reveal their secrets when they’re rumbling, which means Kilauea is producing a treasure-trove of information.

HOW CAN RESEARCHERS PREDICT VOLCANIC ERUPTIONS?

According to Eric Dunham, an associate professor of Stanford University’s School of Earth, energy and Environmental Sciences, ‘Volcanoes are complicated and there is currently no universally applicable means of predicting eruption. In all likelihood, there never will be.’

However, there are indicators of increased volcanic activity, which researchers can use to help predict volcanic eruptions.

Researchers can track indicators such as:

While scientists monitored Big Island lava flows in 1955 and 1960, equipment then was far less sophisticated. Given new technology, they can now gather and study an unprecedented volume of data.

‘Geophysical monitoring techniques that have come online in the last 20 years have now been deployed at Kilauea,’ said George Bergantz, professor of earth and space sciences at the University of Washington.

‘We have this remarkable opportunity … to see many more scales of behaviour both preceding and during this current volcanic crisis.’

Scientists can monitor where gas is emerging, as well as determine its composition and volume. They can even measure the subtle rise and fall of the ground over a broad area and time – down to seconds – which suggests when and where magma is pooling underground.

Discovering variations or correlations between past and present activity provides more clues on what’s happening.

It also helps scientists understand past lava flows, anticipate what could occur next, and pinpoint signs or patterns before an eruption.

‘You’re sort of zeroing in on finer and finer levels of detail into how the volcano works,’ said Michael Poland, a U.S. Geological Survey volcanologist.

‘The more stuff you put on the volcano to make measurements, the more you realize there’s stuff going on that you never knew.’ 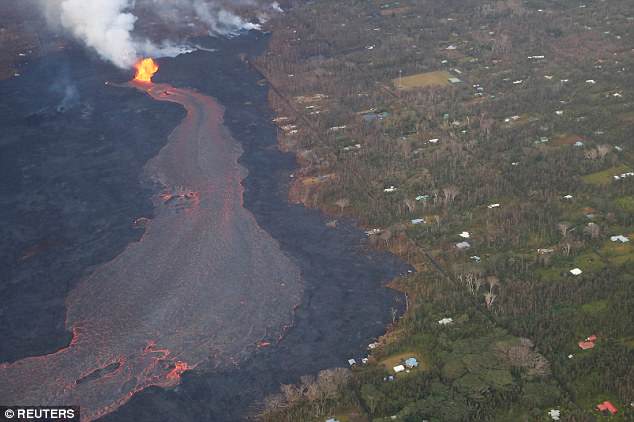 Lava erupts in Leilani Estates during ongoing eruptions of the Kilauea Volcano in Hawaii, U.S., June 5 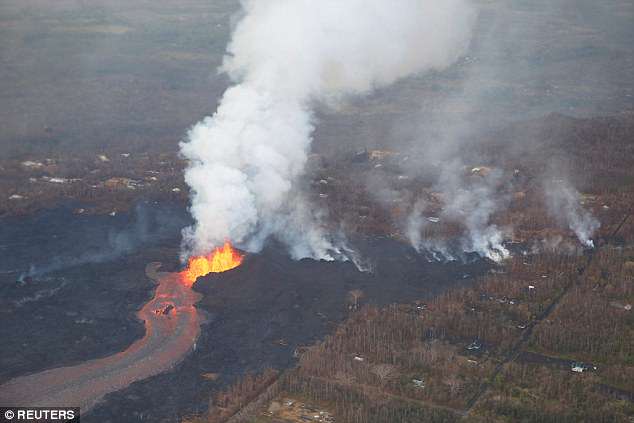 Similar events are expected to continue for ‘months’, Cindi Preller, geologist and duty scientist at the Oahu office of the National Oceanic and Atmospheric Administration said 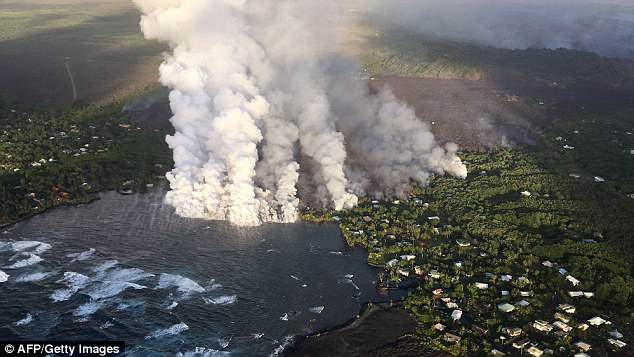 Monday night saw the most damage caused by the volcano since eruptions began on May 3. This image shows shows the lava flow originating from Fissure 8 entering Kapoho Bay