Laverton, Melbourne: Video shows a hoodie-wearing eshay setting fire to a train before walking away

Astonishing footage has showed the moment an arsonist wearing a hoodie set fire to a train before calmly leaving the carriage and wandering off down the platform.

The video released by police on Thursday morning showed the man casually pouring accelerant from a plastic water bottle over three seats on the train in Laverton in Melbourne’s south-west.

He then appeared to bend down and use a lighter to set the seats on fire before walking out onto the platform as the flames flickered behind him.

Police allege the man set fire to the train while it was stopped at Laverton station on March 16.

He then boarded the next west-bound train to Werribee and got off two stops later at Williams Landing.

‘The fire caused damage to the seat and floor of the train which had to be removed from service to be repaired,’ Victoria Police Leading Senior Constable Kendra Jackson said. 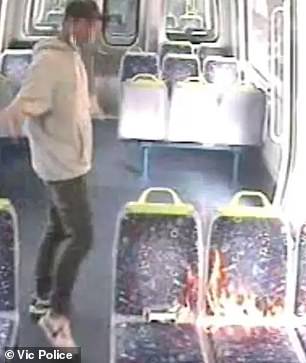 No one was injured during the incident.

The man is described as being Caucasian in appearance, about 30-years-old, 175cm tall and wearing a dark cap and a grey hoody.

Anyone who was near Laverton Railway Station about 11.10am on March 16 or anyone who may recognise the man is urged to come forward.