A top lawyer at one of the world’s biggest law firms has quit after admitting that he sent inappropriate sexual messages.

Bill Voge was the London-based global chairman of US firm Latham & Watkins before he resigned last night amid a growing sex scandal in the industry.

It is reported that Mr Voge sent graphic sexual text messages to a woman he met through a Christian organisation before claiming she would be jailed when she complained.

The woman exchanged messages with Mr Voge after they met through the New Canaan Society, Law360.com reported.

The website stated that the married woman felt he had taken things too far when he invited her to his hotel room, so she contacted members of his firm to complain.

Mr Voge later messaged the woman’s husband telling her she would be jailed for sharing his emails and messages with others, Law360.com reported.

Mr Voge, who never met the woman in person, has insisted he has done nothing illegal, but quit the huge law firm yesterday.

He said in a statement: ‘I deeply regret my lapse of judgment and I am sorry for the distress and embarrassment I have caused my family, friends, and colleagues.

‘My conduct falls well below the personal and professional standards I have tried to uphold throughout my entire career.’ 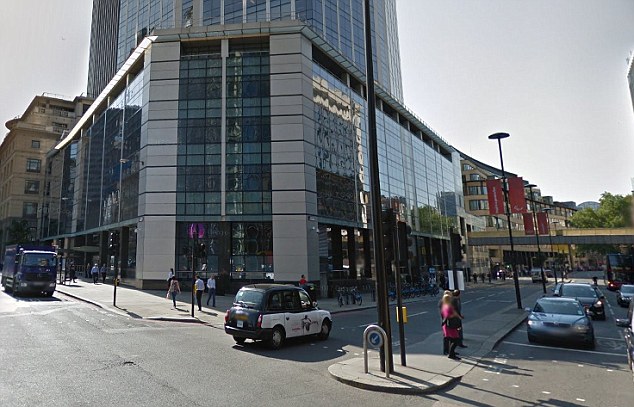 The American firm has lavish offices in Bishopsgate, in the heart of the city of London

The company said in a statement: ‘Mr Voge tendered his resignation after making a series of voluntary disclosures to the firm’s executive committee relating to his personal conduct.

‘Mr Voge’s conduct involved the exchange of communications of a sexual nature with a woman whom he has never met in person and who had no connection to the firm. Mr Voge’s conduct did not involve the firm, any of its clients, or its personnel.

‘Mr Voge engaged in subsequent conduct relating to this matter that, while not unlawful, the executive committee concluded was not befitting the leader of the firm.’

Mr Voge was educated at Berkeley before joing Latham and Watkins in 1983. He has worked in the firm’s London, New York and San Diego, specialising in energy and finance contracts, and became global chairmain in 2015.

His resignation follows a series of sexual harassment claims at law firms.

In February, the London branch of global law firm Baker Mckenzie said on Wednesday it had appointed an external legal team to review how it had responded to an employee’s allegation that she had been sexually assaulted by one of the firm’s partners.