The lawmakers leading the Democratic and Republican campaign efforts for the House of Representatives banded together on Sunday to call for unity in the wake of recent violence and with a little more than a week to go before election day.

‘Democrats are not my enemy, they are my opponents and while we have different visions for the future of America, different directions, we are all Americans first. We need to come together and do what’s in the best interest of America no matter who wins in ten days. I believe we can come together and make that happen,’ Congressman Steve Stivers, who leads the National Republican Congressional Committee, said on ‘Fox News Sunday.’

His Democratic counterpart, Ben Ray Lujan of the Democratic Congressional Campaign Committee, also called on the country to come together after a spat of violence in the form of pipe bombs sent to prominent Democrats last week and Saturday’s mass shooting at a synagogue in Pittsburgh.

‘We should come together as a country. They should not be a political response, but rather a response of how we can further bring us together,’ Lujan said on ‘Fox News Sunday.’ 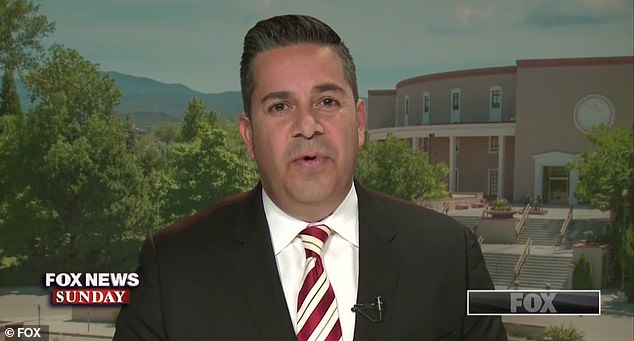 President Donald Trump issued a similar call for a ‘civil tone’ in politics last week in the wake of the bombing attempts.

But he was back to his criticism Sunday afternoon, when he tweeted an attack against billionaire former hedge fund manager Tom Steyer, who’s trying to get him impeached and considering a 2020 bid against him, calling him ‘wacky.’

‘Just watched Wacky Tom Steyer, who I have not seen in action before, be interviewed by @jaketapper. He comes off as a crazed & stumbling lunatic who should be running out of money pretty soon. As bad as their field is, if he is running for President, the Dems will eat him alive!,’ Trump tweeted on Sunday afternoon.

Steyer is a major Democrat donor who is pushing the party to launch impeachment proceedings against the president should they retake control of the House of Representatives in the midterms.

He was the target of one of the pipe bombs sent out last week. At least 14 packages containing pipe bombs were sent to Democratic Party leaders including former President Barack Obama, former Vice President Joe Biden and Trump’s 2016 election opponent, Hillary Clinton.

Additionally, Robert Bowers, 46, was charged with 11 counts of criminal homicide, six counts of aggravated assault and 13 counts of ethnic intimidation after police said he opened fire at the Tree of Life Synagogue during Saturday morning services.

Stivers is working to keep Republicans in control of the House when voters go to the polls on Nov. 6 – less than 10 days away.

He admitted he sometimes disagrees with the president but said he liked his words in the wake of the bombings and hoped he stayed on that path.

‘I sometimes disagree with the way the president treats people. I thought after the pipe bombs he initially set the right tone of unity and coming together. And I hope that he will continue on that path,’ Stivers said on ‘Meet the Press.’

Lujan is leading the Democratic effort to win back the majority. Democrats need to gain a net of 23 seats in order to win the House.

Both lawmakers expressed confidence their party would emerge victorious on Election Day.