Lawyer, 47, found dead at foot of cliff hours after being suspended

Brexit-expert lawyer, 47, was found dead at foot of cliff hours after he was told he faced an investigation over ‘inappropriate behaviour’ at the office Christmas party, inquest hears

Geraint Thomas, 47, was found dead at a local suicide spot in Wales hours after being suspended from work

A lawyer was found dead at the foot of a cliff hours after being suspended from work after his behaviour at the firm Christmas party, an inquest heard today.

Geraint Thomas, 47, was called for a private meeting at his law firm and learned a formal investigation was being carried out into alleged ‘inappropriate behaviour’ at the office party.

Married Mr Thomas vanished after leaving the office and was found dead at the foot of a 150ft cliff hours later.

The inquest heard his devastated wife Rebecca sent text messages to Mr Thomas pleading for him to come home.

Mr Thomas allegedly had formal complaints made against him by women staff following a work Christmas party in London.

The Oxford graduate was a partner at law firm Eversheds Sutherland and specialised in offering Brexit advice to businesses.

The inquest heard Mr Thomas was told he was being suspended on December 17 last year during a ‘very short meeting.’

David Young, representing the law firm, said: ‘As far as I know, nobody had any contact with him within the business after he left that meeting.’

The Oxford University graduate then travelled home to Cardiff where he was often based in the company’s other office in the Welsh capital.

The father of two then drove to a clifftop carpark at Southerndown, near Bridgend. A teddy bear belonging to his daughter was found at the top of the cliff.

Senior Coroner Graeme Hughes said: ‘During the evening of December 17 and into the early hours of December 18 a series of text messages were sent to Geraint from his wife Rebecca asking Geraint for his whereabouts and pleading with him to answer his phone and come home.’ 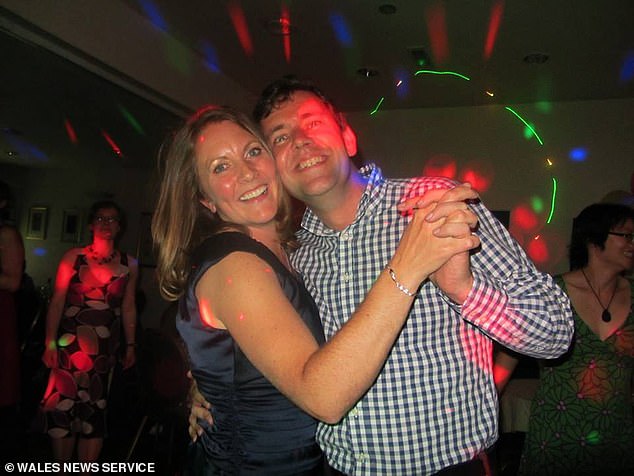 Geraint Thomas with his wife Rebecca, who sent him a series of texts pleading with him to return home after he disappeared folloing the terse meeting at work

The inquest in Pontypridd was adjourned until October.

A profile on the company website said Mr Thomas has been a partner since 2003 specialising in consumer credit and mortgage regulations.

The fluent French-speaker was also part of Eversheds Brexit advisory team ‘working with a number of clients to help them with Brexit planning’ and ‘helping them take steps to put themselves in the best possible position’.

At the time Lee Ranson, CEO of Eversheds Sutherland, said: ‘On behalf of the firm I can confirm with great sadness that Geraint Thomas, a partner in our commercial team, was found dead on 18 December 2018. 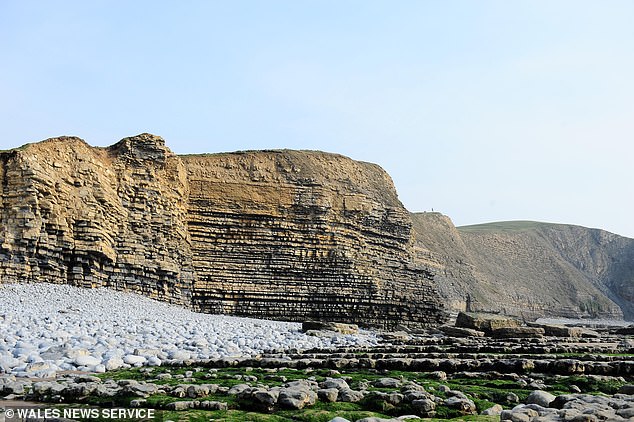 His body was found hours oater at the Southerndown Cliff tops near Bridgend, South Wales

‘Details surrounding his death are unclear and we are currently liaising with his family and the police.

‘Geraint was a highly respected and esteemed lawyer who, having joined the firm in 1994 spent his entire career with the firm.

‘A truly exceptional lawyer, he will be remembered for his dedication to his clients and to the firm in equal measure. He will be greatly missed.

‘Our sincere sympathies and thoughts are with Geraint’s wife, family and friends at this exceptionally difficult time.

‘Many of Geraint’s colleagues have also been deeply affected by this tragic news’.