The lawyer for the ‘Coughing Major’ convicted of cheating on the TV quiz show Who Wants To Be A Millionaire? hopes that new scientific analysis of audio tapes could lead to his conviction being overturned, The Mail on Sunday can reveal.

The new evidence suggests that Charles Ingram’s fellow contestant and alleged accomplice Tecwen Whittock, who a jury decided had guided former Army major Ingram to give correct answers, also coughed on numerous other occasions when his intervention could not have been of any use.

Also, the analysis, based on high-technology methods unavailable at the time of the trial 17 years ago, has identified further coughs on recordings of the show which might have helped Ingram – but could not have come from Whittock. Instead, they emanated from members of the studio audience.

The new research has been led by Professor Alyn Morice, the Head of Respiratory Medicine at Hull University Medical School, a world-renowned expert on coughing diseases and treatment.

The new hope for Ingram comes after ten million people watched Quiz, ITV’s dramatisation of his story, earlier this month, in which viewers were led to believe the jury should have acquitted Ingram because the prosecution had failed to prove the case beyond reasonable doubt – the standard of proof used to convict people in Britain’s criminal justice system.

Prof Morice told The Mail on Sunday that the new evidence may create ‘reasonable doubt’. It is now likely to become part of a dossier which Ingram’s solicitor, Rhona Friedman, intends to submit to the Court of Appeal later this year.

Ingram thought he had clinched the £1 million jackpot at a recording of the show on September 10, 2001, but the production company, Celador, withheld his cheque amid suspicions he’d cheated, in cahoots with his wife, Diana, and Whittock. After police were called in, the trio were tried for deception in 2003 at Southwark Crown Court in London, found guilty by a ten-to-one majority verdict, and given fines and suspended prison sentences.

Last night, speaking for the first time since Quiz was screened, Ingram said he and his wife were confident they could prove their innocence. He said: ‘Our determination to clear our names has remained constant throughout the years.

Letting it go has never been an option. Our only regret is that righting this wrong has taken so long.’

This story – a parable of human ruin, supposedly driven by greed – has retained a lasting fascination.

Ingram, now 56, is the son of an RAF wing commander, and his Army record – he served with distinction in Bosnia – was unblemished.

An apparent personification of honour and integrity, he hoped to reach the rank of brigadier, which would have enabled him to retire last year with a healthy pension. 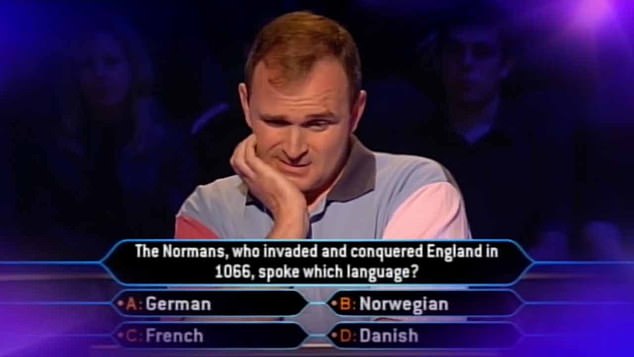 Charles Ingram on Who Wants to be a Millionaire. Last night, speaking for the first time since Quiz was screened, Ingram said he and his wife were confident they could prove their innocence

Instead, after the trial, he was forced to resign his commission, and his wife lost her job as a teaching assistant.

Public hate-figures, their house and car were vandalised, and their cat was attacked and badly wounded.

At one stage, Ingram came close to suicide – ‘I had 40 pills in one hand and a glass of water in the other,’ he said in 2015, ‘then something stopped me.’ It was a text from one of the couple’s three daughters, signed with three kisses, saying she still had faith in him.

The ITV drama’s sympathetic portrayal of the Ingrams was partly based on Bad Show, a book by the investigative journalist Bob Woffinden in conjunction with James Plaskett, another Who Wants To Be A Millionaire? contestant, who won £250,000. Both were convinced the Ingrams were victims of a miscarriage of justice.

Rhona Friedman says she agreed to represent the Ingrams after Woffinden ‘pitched me, as if he might have done to an editor, trying to sell a story. He desperately wanted someone to take it on.’

More than five years after that ‘pitch’ (and with Woffinden now dead) she, too, is convinced: ‘I have no hesitation in saying I think this was a miscarriage of justice.’

Some of the reasons were laid out in the TV drama. The prosecution claimed Whittock had been in contact with Diana Ingram before the recording and he used coughs to direct the Major away from wrong answers and towards correct ones. Yet, they had never met.

Whittock was one of ten possible contenders for the Millionaire chair, sitting behind Ingram, waiting to compete in the show’s ‘fastest finger’ introductory round. Like Diana Ingram, Whittock, the then-head of business studies at Pontypridd College, was part of a network of quiz aficionados, and they had spoken together by phone.

But he only found out he was due to be on the show at the same recording as her husband during the evening before. He and Diana spoke to each other for less than five minutes while the Ingrams were in their car.

Charles Ingram, Friedman points out, ‘had never spoken to Whittock, and never heard him cough. So how could he have recognised it when he did?’ As for Whittock, keen as he was on prize-show quizzes, he was not very good – and so, arguably, not an obvious choice to act as guide for a cheat.

He had already been on at least five programmes, but his best results had been to win £500 on a show called Beat The Bong and a copy of a world atlas from Sale Of The Century – having convinced his wife, he told the trial jury, he was about to win a car. Eventually, he was eliminated from Who Wants To Be A Millionaire? having won just £1,000. 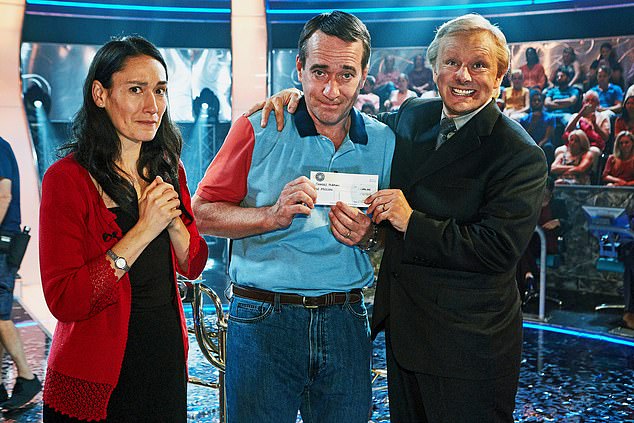 If Whittock had been issuing what the prosecution called ‘significant coughs’, the quizmaster Chris Tarrant, sitting very close to Ingram, did not hear them – as he freely admitted in an interview two months after the trial.

Moreover, there were loudspeakers in the contestant’s chair, which pumped out steadily louder background music as each round of the contest became more tense, and the chair itself vibrated – ‘like a crazy massage chair at an airport’, Friedman says.

As she began to work on the case, she began to focus on the provenance of what is known as ‘Tape G’, the VHS videotape version of the show which the prosecution relied on in court, in which, she says, the 19 ‘significant coughs’ ring out ‘like pistol shots’.

Like the show itself, the tape was made by Celador.

Indeed, on Tape G, the coughs are so loud that when Tarrant gave evidence in court that he didn’t think at the time the show was being recorded that Ingram had been cheating, the jury burst out laughing.

However, Friedman has established there were at least 21 microphones in the studio – eight over different areas of the audience, and individual radio mics on Ingram, Tarrant, the ten ‘fastest finger’ contestants and Diana, who was in the audience.

Yet the lawyer says the original, raw recordings of the sound the microphones picked up before it was all edited together seem to have disappeared. Moreover, there were at least six other edited versions of the show prepared before the trial apart from Tape G. The originals of these appear to be missing, leaving only ‘cloned copies’.

Crucially, Friedman says, there are ‘important differences’ between these versions and Tape G – and on some, the coughs are much less prominent.

Significantly, all the different versions were prepared by sound engineers who were not working for the police or the Crown Prosecution Service, but for Celador, who kept them in their possession until shortly before the trial began.

Friedman has commissioned more analysis, saying: ‘Work is still ongoing to explain the apparent anomalies when you compare the different versions of the tapes.’

As for coughing expert Prof Morice, although he gave evidence at the trial for the defence, he was only able to state that Whittock suffered three chronic conditions – asthma, rhinitis and hay fever – that were likely to make him cough frequently. Back then, in 2003, it was not technically possible to say for sure whether an individual was the source of a particular cough.

But now, Prof Morice says, technological advances mean it is possible to make spectrograms – pictures of the sound made by an individual’s cough. These, he says, ‘are, in effect, their coughing fingerprint,’ adding, ‘this is based on peer-reviewed science and has become a recognised technique’.

He adds: ‘The recording quality isn’t perfect, but we’ve got enough information to see that some of the coughs which might have been said to be helpful to Ingram didn’t come from the area where Whittock was sitting, but from another part of the studio.’

Prof Morice has produced a spectrogram of the person recorded coughing in the ‘fastest finger’ contestants’ seats – almost certainly Whittock, although he cannot say it was definitely him, because he has not had a chance to take Whittock’s coughing ‘fingerprint’.

Morice says Whittock ‘coughed at least as often at times that had no significance’ – such as when Ingram didn’t seem stumped for an answer – as he did when it might have been helpful.

And Friedman says: ‘If Celador hadn’t been so fixated on Whittock, they might have picked on some hapless member of the audience. It highlights the absurdity of the belief in this so-called coughing plot.’ 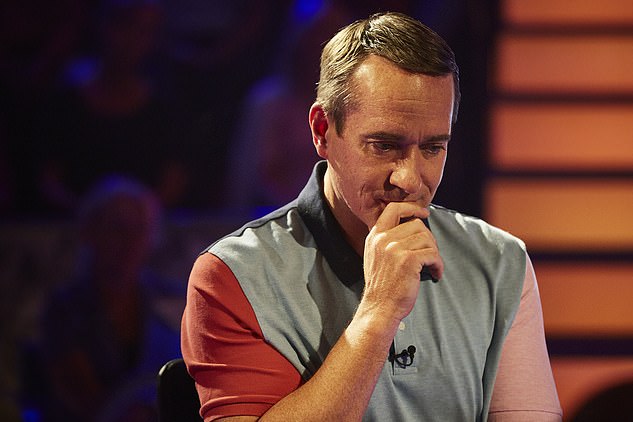 Charles Ingram has already fought and lost an appeal against his conviction, which means the fresh application to the court will be made on behalf of his wife.

However, if she gets leave to appeal, the Criminal Cases Review Commission is expected swiftly to refer her husband’s and Whittock’s cases back to the court as well.

Diana said yesterday: ‘We have been buoyed by the reaction to the TV drama, Quiz, and the play on which it was based. Many people convinced of our guilt have said their minds have been changed.’

Charles added: ‘I am hopeful that advances in science will support my suspicions that evidence had been altered. If the Court of Appeal does become involved, then people will have to account for what has happened to key exhibits.’

For the Ingrams, a new hearing cannot come soon enough. Their lives since the trial have been tough.

A series of appearances on TV reality shows, including Celebrity Wife Swap (where he was incongruously paired with the Big Brother contestant Jade Goody), dried up years ago. Bankrupted several times, they make a precarious living in Bath, selling Murano glass jewellery designed and made by Diana.

Diana says that despite her hopes of a fresh appeal, she has no illusions: ‘There will always be a group of people at the heart of this case who can never publicly change their opinion because to do so would cause professional embarrassment at the very least. But we are realistic. Favourable public reaction and support in the Press, welcome though it is, will not sway a court.’

Celador – which launched the show in 1998 and has earned an estimated £25 million a year from it – declined to comment.