Attorneys for a federal death row inmate who was convicted of molesting and killing his two-year-old daughter have filed a motion arguing he should be spared execution due to intellectual disability.

Alfred Bourgeois, 55, is one of the five federal inmates whose execution was scheduled by Attorney General Bill Barr last month, after a 16-year lapse in federal executions.

On Thursday, attorneys for Bourgeois filed for a stay of execution arguing that his IQ had been tested on two occasions at 70 and 75, and had been ‘corrected under clinically—accepted standards to 67 and 68.’

Historically, IQ scores below 70 have been the prime factor for a diagnosis of intellectual disability, otherwise known as mental retardation.

‘Alfred Bourgeois is intellectually disabled and constitutionally ineligible for the death penalty,’ his attorney Victor Abreu said in a statement to DailyMail.com.

‘The jury that sentenced Mr. Bourgeois to death never learned that he was intellectually disabled,’ Abreu argued, adding that no court has ever used proper scientific standards to review his client’s disability. 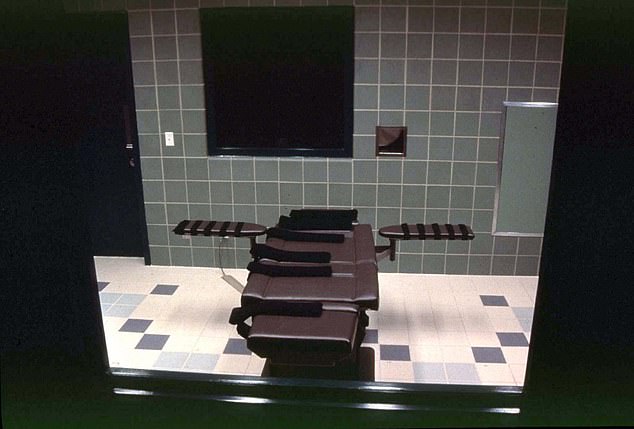 The execution chamber in the U.S. Penitentiary in Terre Haute, Indiana is seen in a file photo. Here, five men are scheduled to be executed by lethal injection in December and January

‘Alfred Bourgeois is intellectually disabled and constitutionally ineligible for the death penalty.

‘The jury that sentenced Mr. Bourgeois to death never learned that he was intellectually disabled because his trial lawyers did not present the evidence that was available to them. When the performance of his trial lawyers was later challenged on appeal, the same judge who appointed those ineffective lawyers denied relief using outdated and unscientific standards and stereotypes about the intellectually disabled that have now been thoroughly rejected by the scientific community and the United States Supreme Court.

The Supreme Court ruled in 2002 that executing people with intellectual disabilities is unconstitutional because it is cruel and unusual punishment.

When Barr announced the five execution dates last month, the Justice Department said in a statement that the inmates had all ‘exhausted their appellate and post-conviction remedies, and currently no legal impediments prevent their executions.’

‘Congress has expressly authorized the death penalty through legislation adopted by the people’s representatives in both houses of Congress and signed by the President,’ Barr said in a statement.

‘The Justice Department upholds the rule of law—and we owe it to the victims and their families to carry forward the sentence imposed by our justice system.’

Although the federal government has not carried out an execution since 2003, individual states have executed more than 600 inmates in the same time period.

Prosecutors say that Bourgeois physically and emotionally tortured, sexually molested, and then beat to death his two-and-a-half-year-old daughter.

In May of 2002, a Texas court ordered Bourgeois to pay Katrina Harrison $160 per month in child support for the young daughter whom a paternity test had recently proven he was the father to.

The court also granted Bourgeois’s request for visitation rights with the girl for the ensuing seven weeks, and he took custody of her that afternoon.

The girl briefly stayed with Bourgeois, his wife, and their two children at their home in Louisiana – but the family and the two-year-old girl soon departed with Bourgeois on his long-haul trucking route.

Bourgeois systematically abused and tortured his two-year-old daughter in several ways, and became fixated on her toilet training, according to court documents.

Her training potty became the girl’s primary seat during the day, and Bourgeois even forced her to sleep on it when they were traveling at night.

He punched her in the face with enough force to give her black eyes. He whipped her with an electrical cord, and he beat her with a belt so hard that it broke.

The court heard that Bourgeois beat her in the head with a plastic baseball bat so many times that her head ‘was swollen like a football.’ 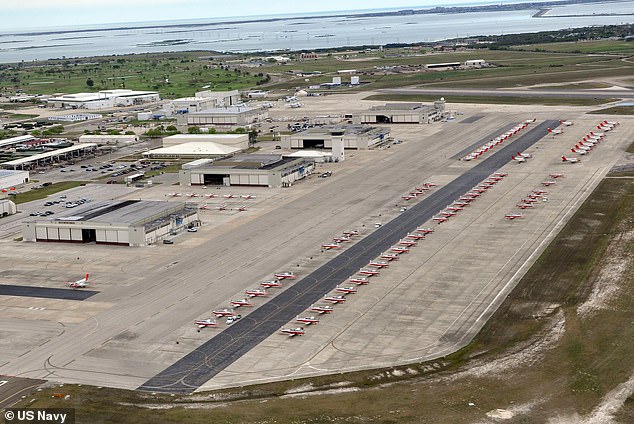 Bourgeois, a long haul trucker, beat his two-year-old daughter to death at Naval Station Corpus Christi (above) while making a delivery. He claimed she fell from his big rig

There was also evidence of sexual abuse. A family friend pointed out blood in the girl’s diaper, which a physician determined was from external irritation of the vagina, though he could not specifically determine whether abuse took place. After her death, a rectal swab of the girl was positive for semen.

On July 26, 2002, the Bourgeois family stopped by their home in Louisiana, where Bourgeois found a court order directing him to remit $519.99 in child support to his ex-wife.

The family continued on Bourgeois’s trucking route, arriving the next morning at the Corpus Christi Naval Air Station to deliver a shipment, where he became enraged at the girl for tipping over her potty seat.

Bourgeois beat the girl to death in the cab of his truck, and then tried to claim that she had died in a fall from the truck.

On March 16, 2004, a jury in the U.S. District Court for the Southern District of Texas found Bourgeois guilty of multiple offenses, including murder, and he was sentenced to death.

Bourgeois’ execution is scheduled to occur on January 13, 2020 at USP Terre Haute in Indiana.

Why federal executions had paused

In July, the Justice Department said it would resume federal executions for the first time since 2003.

Since a Supreme Court decision in 1976 lifted a four-year moratorium on the death penalty, the federal government has only executed three men: two in 2001 and one in 2003.

However, in the same time period since 1976, individual states have carried out more than 1,500 executions.

In 2014, an Oklahoma execution was problematic enough that then-President Barack Obama mulled a moratorium on the federal death penalty.

Though a moratorium never materialized, the Democratic party’s national platform endorsed one two years later, and no federal executions had been scheduled since.

On July 25, the Justice Department said that the federal execution protocol had been amended to replace the old three-drug procedure previously used in federal executions with a single drug—pentobarbital.

‘Since 2010, 14 states have used pentobarbital in over 200 executions, and federal courts, including the Supreme Court, have repeatedly upheld the use of pentobarbital in executions as consistent with the Eighth Amendment,’ DOJ said in a statement.

There are currently 62 inmates on federal death row, including the five men slated for the death chamber in December and January.