Bondi Beach was overrun by thousands of revellers dressed head-to-toe in white for a very posh $90 picnic that came with some very bizarre rules.

Party-goers at the event Le Dîner en Blanc Sydney were under strict instructions to wear an entirely white outfit as they sat down on long rows of tables set up on the sand for Saturday evening’s 5,000-person soiree.

An area roped off on the beach had been rented out by organisers for $32,411, following approval from Waverley Council.

The dinner party, which was launched more than 30 years ago by Frenchman Francois Pasquier, has boomed in popularity around the world thanks to its ‘shareability’ on social media.

Saturday marked the 10th edition of the exclusive French-style event in Sydney, which prides itself on being an exclusive and sophisticated gathering.

Attendees had to fork out $93 each plus a $15 membership fee for the event but bizarrely they had to bring their own food, cutlery, tables and chairs.

Those who wanted catering could pre-purchase a hamper at an extra cost and no alcoholic drinks were allowed other than pre-ordered wine and champagne from the event organisers.

While guests are meant to show ‘exemplary’ behaviour at the event, revellers were quick to kick their heels up as the sun went down – with the event turning into a beachside dance party with some taking to table-dancing.

One guest was seen being carried from the event on a stretcher into an ambulance late on Saturday night.

Le Dîner en Blanc Sydney kicked off in style in Bondi Beach on Saturday night with 5,000 guests in attendance 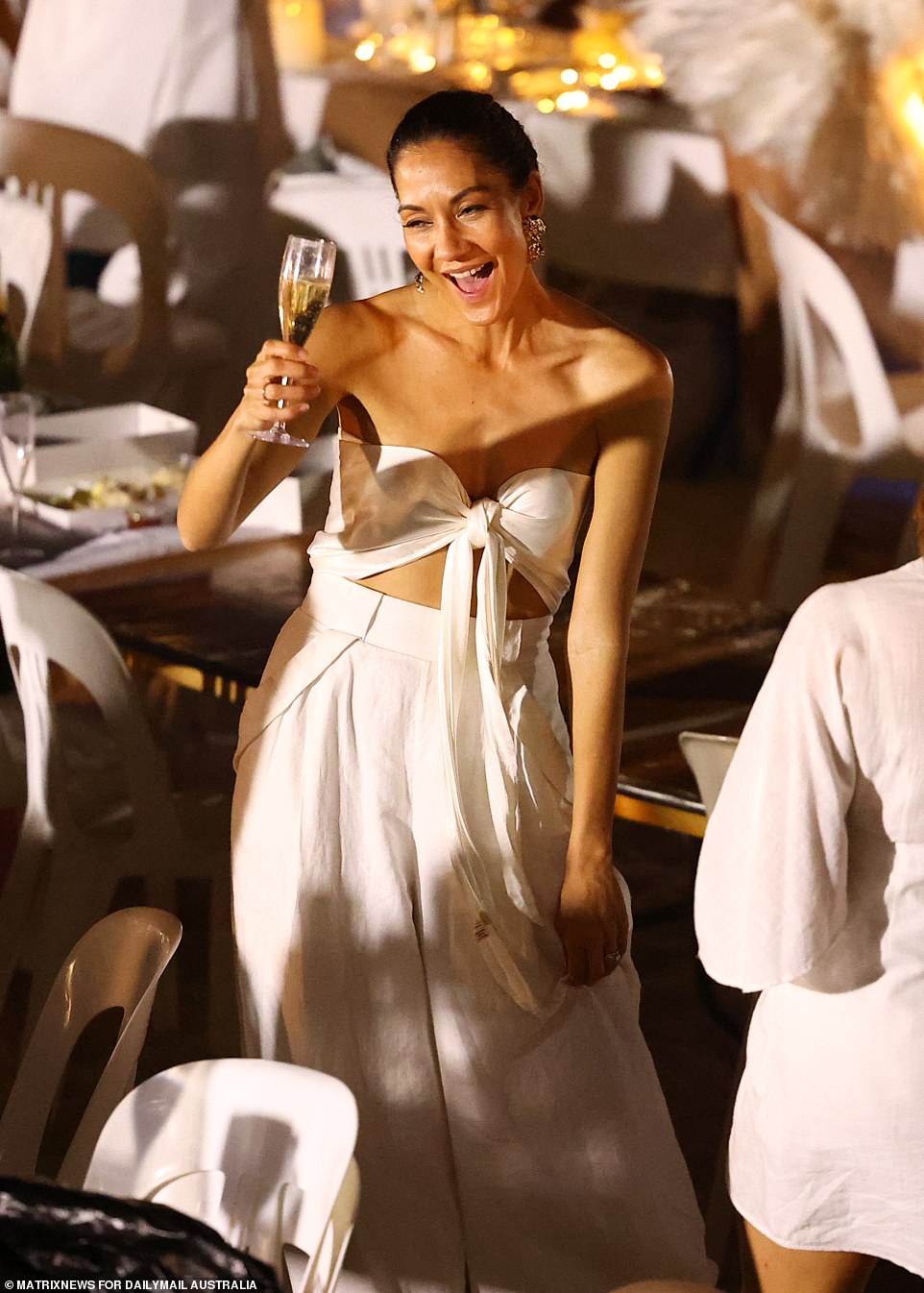 Revellers kicked up their heels at the posh picnic on Saturday, that saw them all wear white head-to-toe and bring their own food 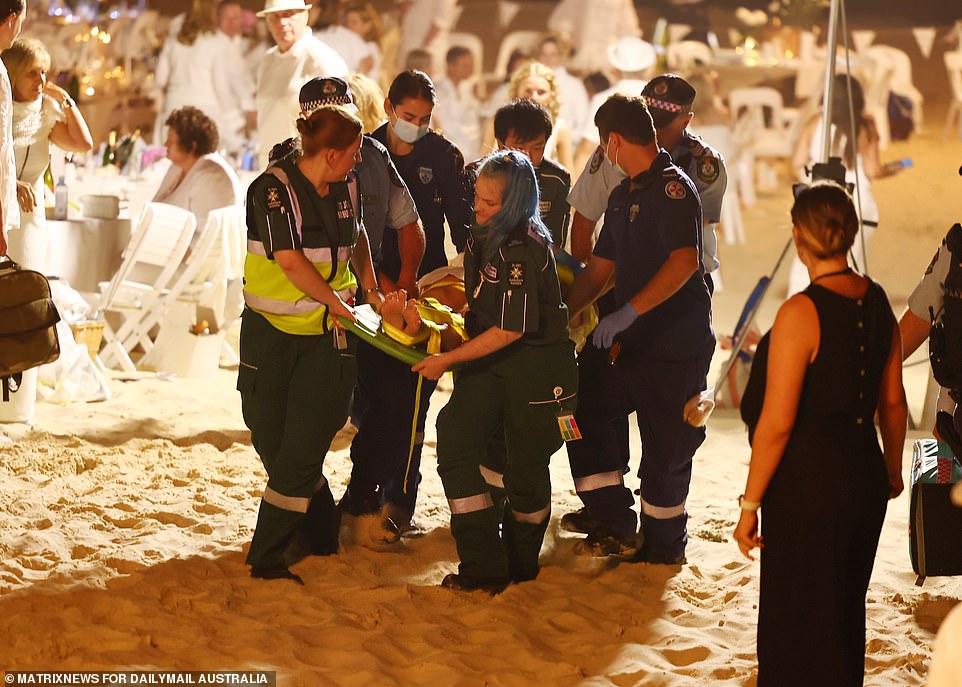 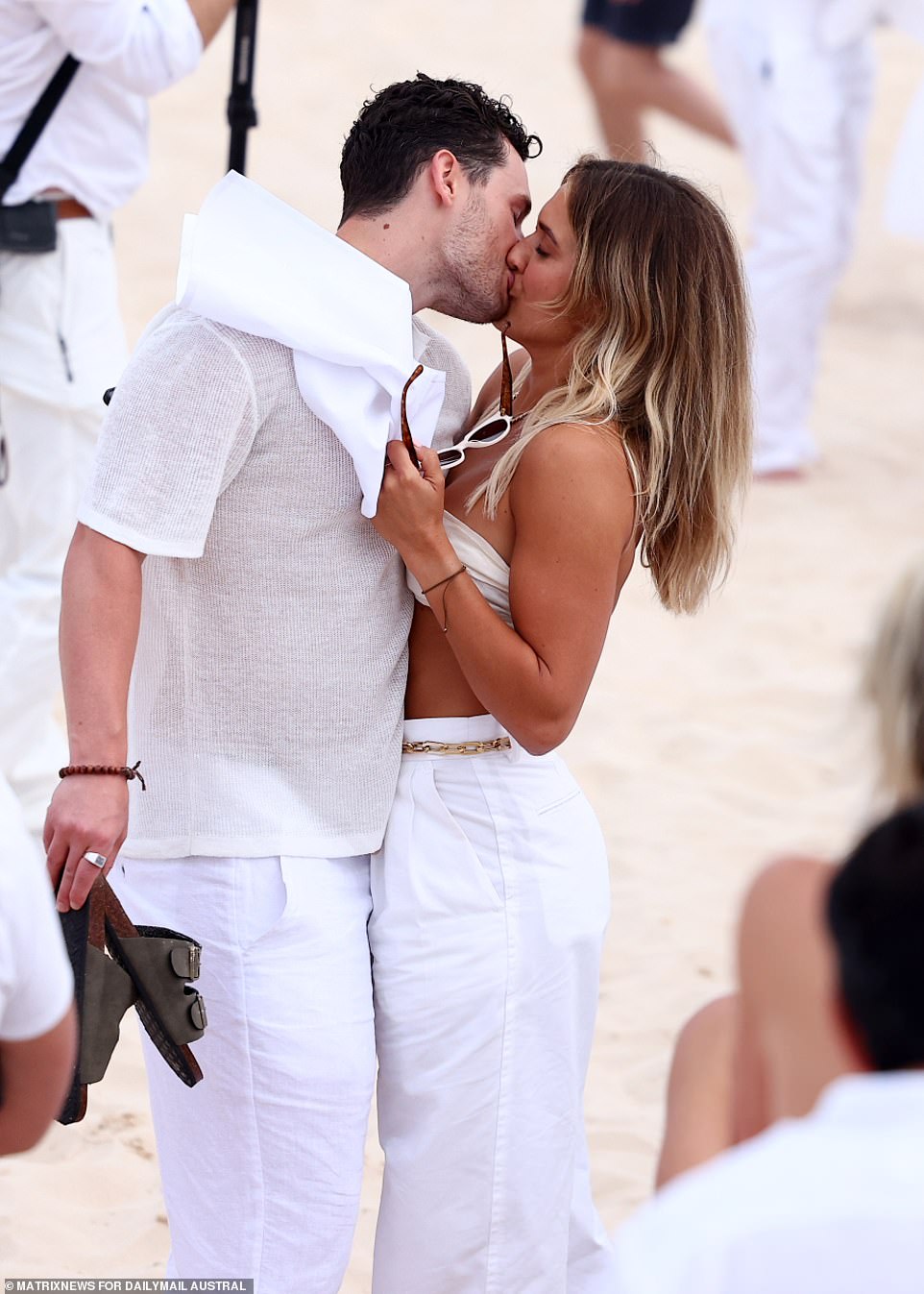 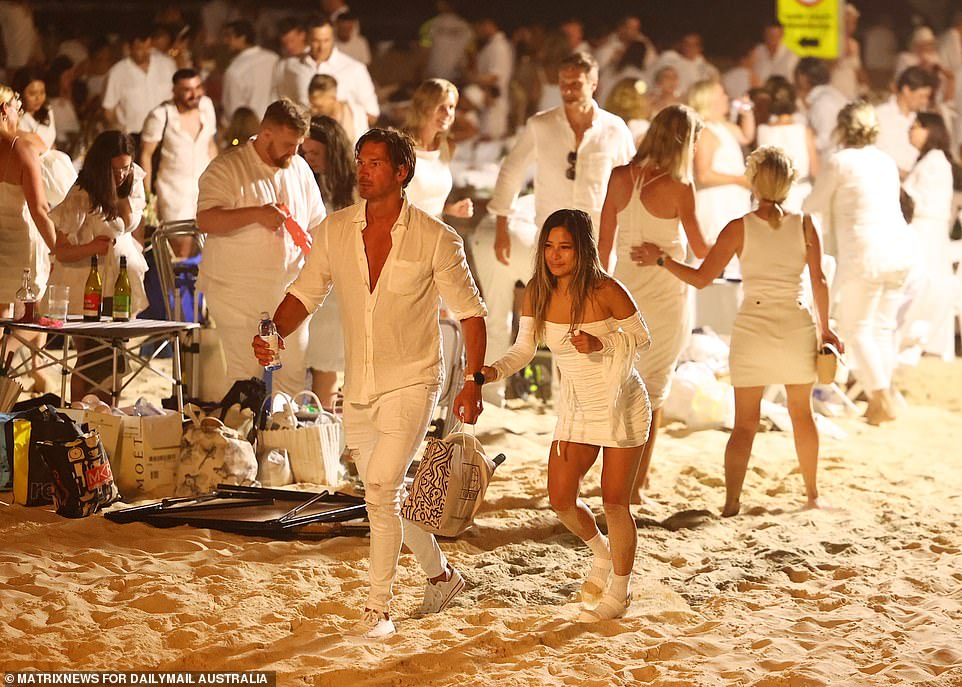 Bondi Beach was overtaken by thousand of revellers dressed head-to-toe in white, who picnicked then partied into the night on the world-famous famous stretch of sand 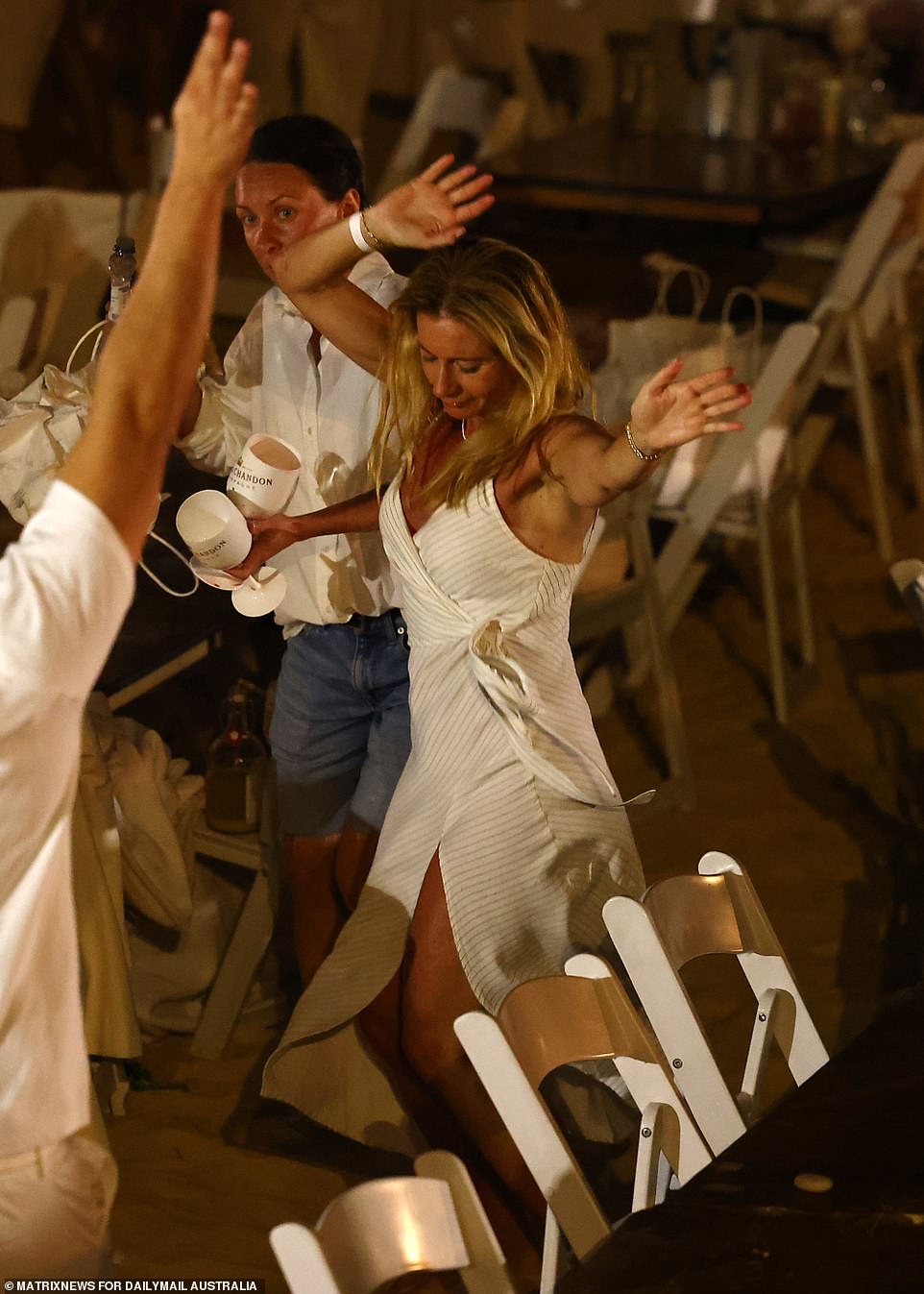 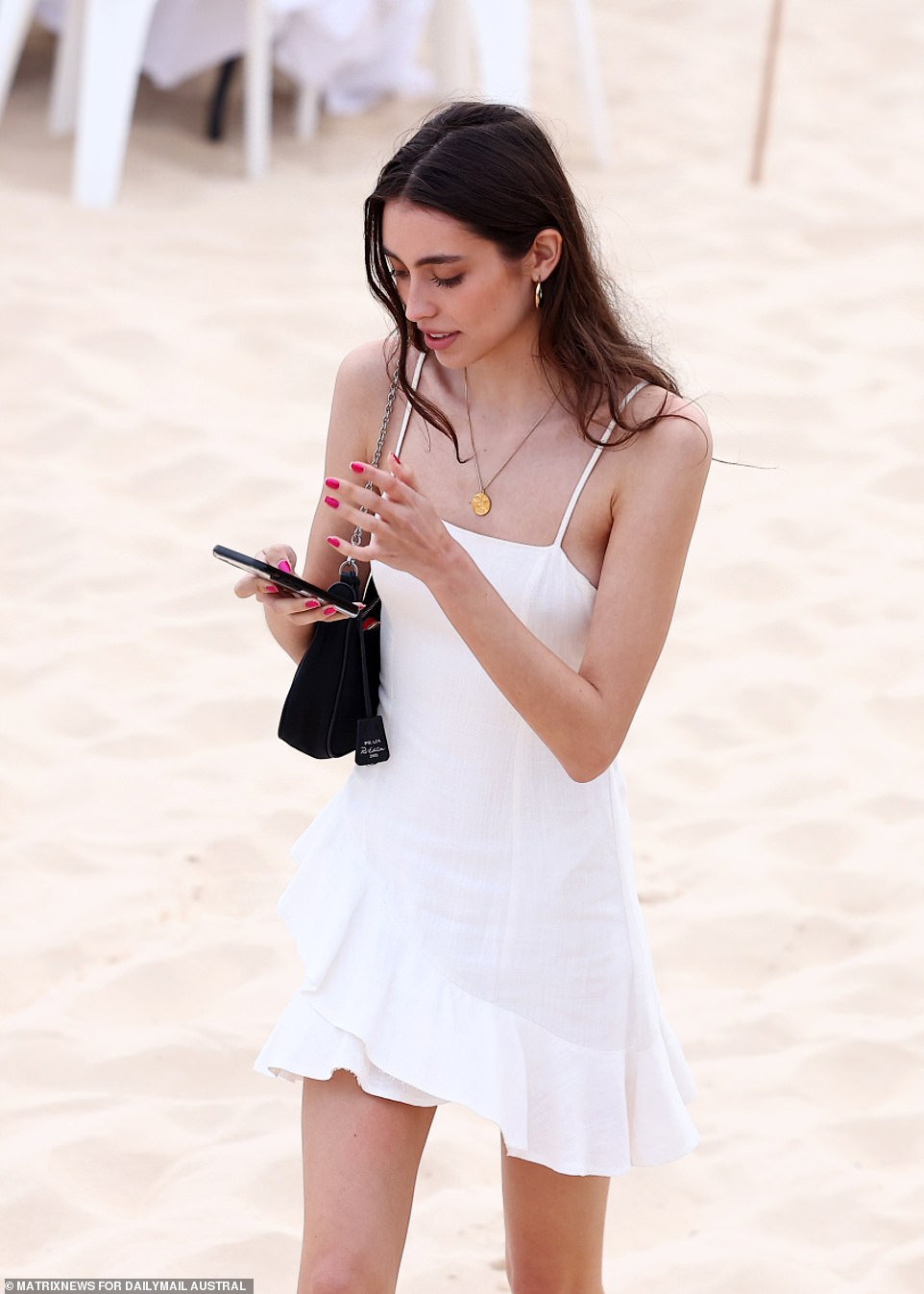 The number one rule attendees had to follow: dress all in white for the occasion 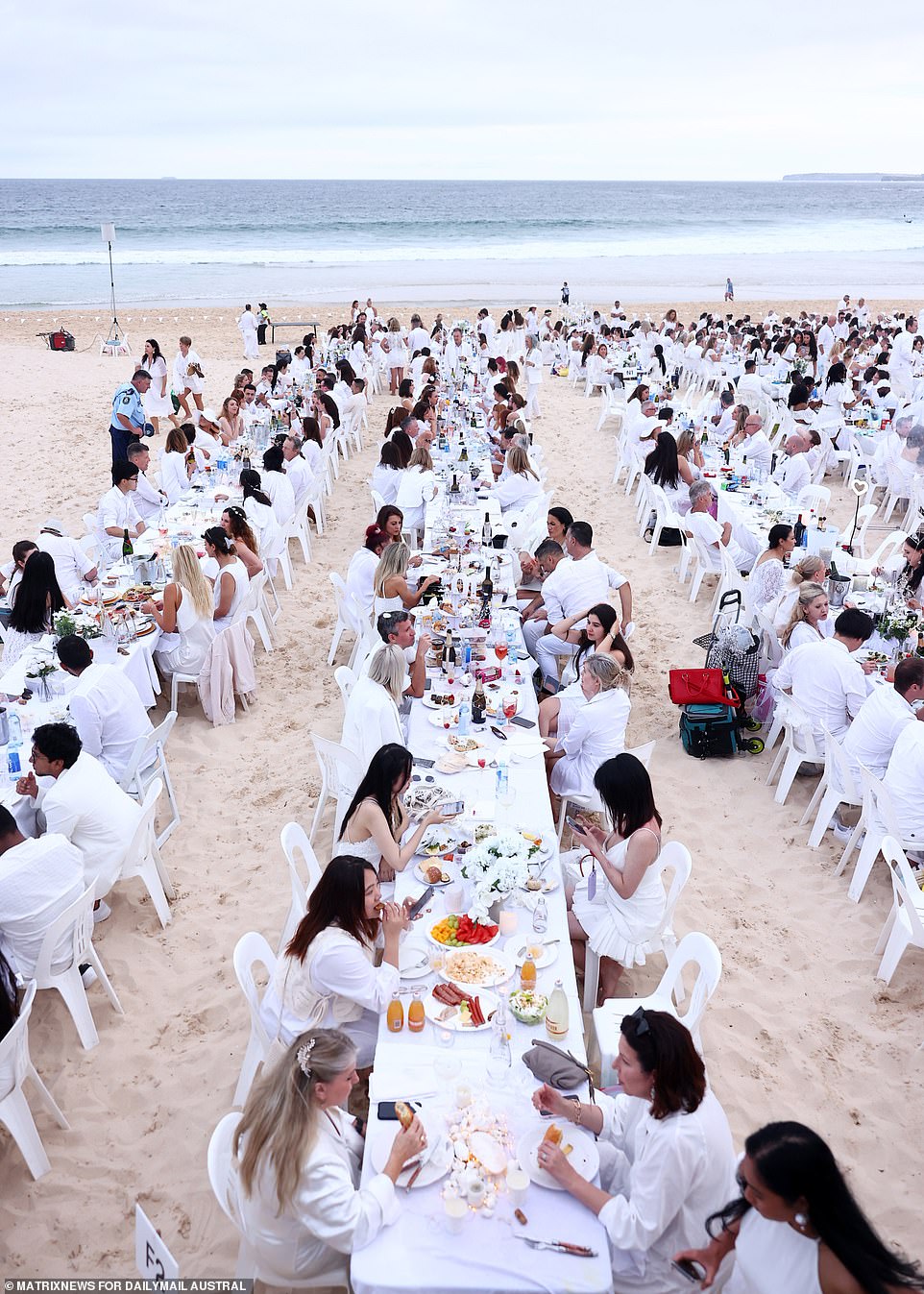 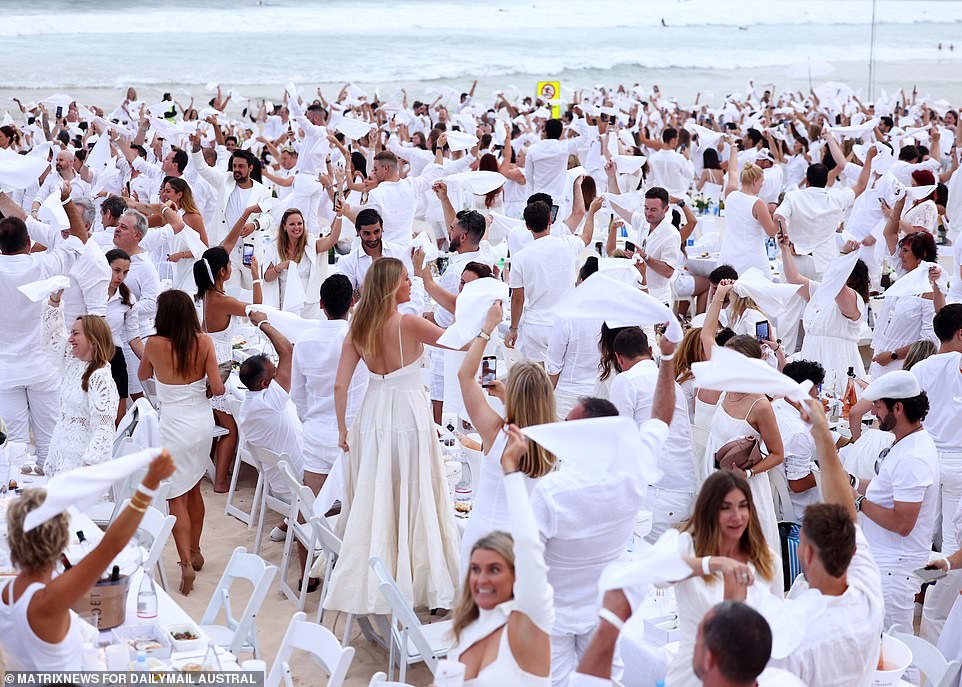 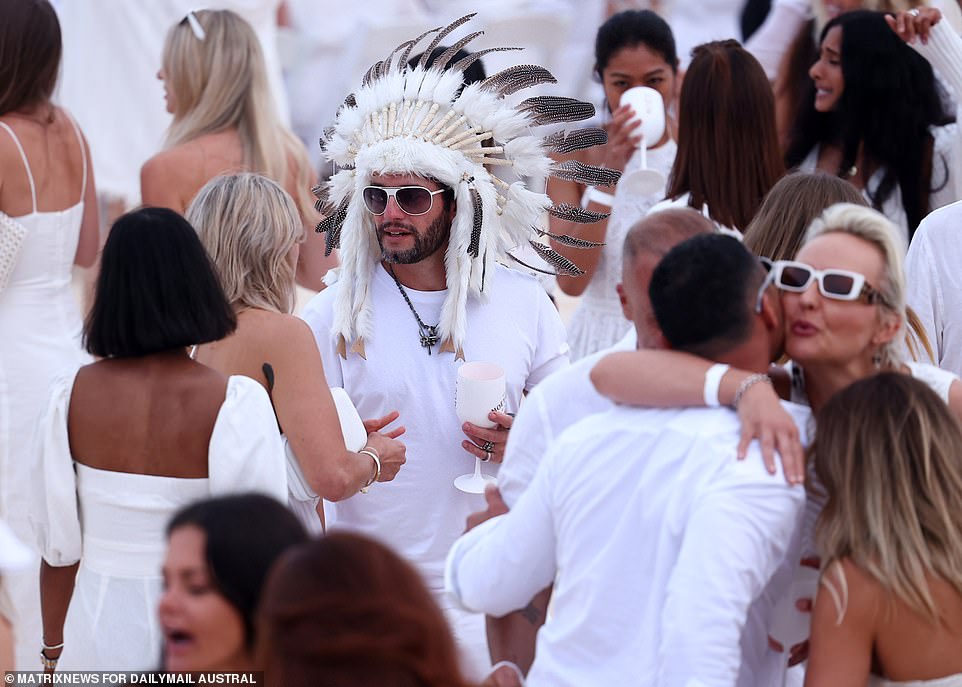 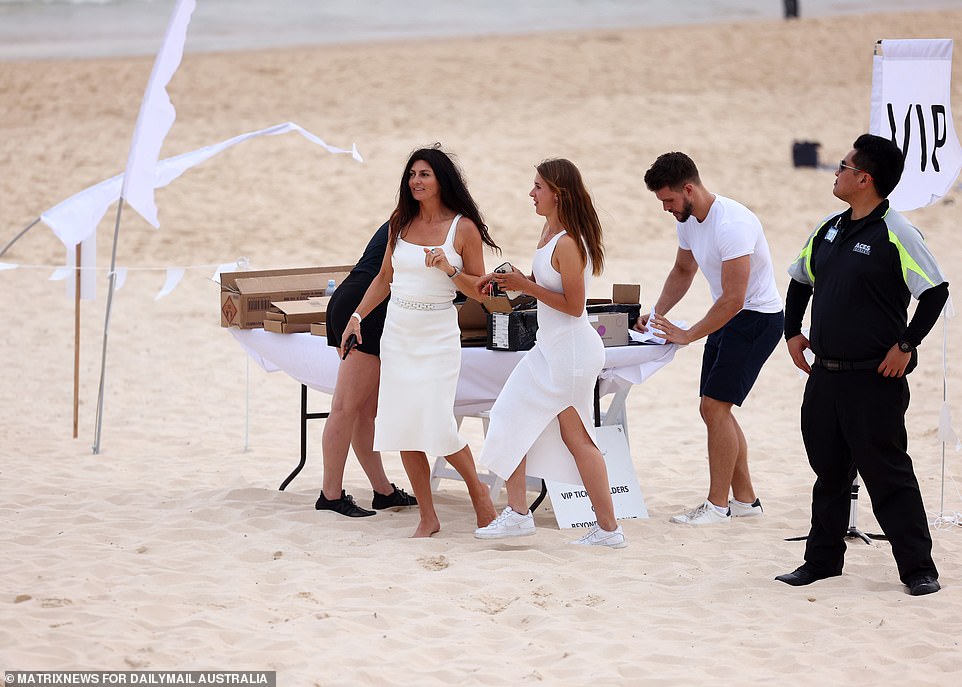 Once confirmed, participation was mandatory, regardless of weather conditions (i.e. it was on rain or shine)

Le Diner en Blanc was previously held outside the Sydney Opera House, on the UNESCO listed Cockatoo Island in Sydney Harbour, and at Bondi Beach in 2013.

Revellers faced a strict set of rules to attend the event, which has spread to more than 60 countries with the locations usually kept secret, even to guests, until the day of the function.

‘Participants register online, dress elegantly all in white, bringing their own white tables, chairs, crockery, cutlery and a white garbage bag to take away their own rubbish,’ the event website says.

The most important rule is the white colour code, which for the organisers was a deal-breaker.

‘This means no ivory, no off-white, and no beige… No black and/or brown belts or shoes allowed,’ the event webpage said.

Even umbrellas and raincoats had to be white in the event of a downpour, with the dinner going ahead rain, hail or shine.

Daily Mail Australia did spot a couple of male revellers who’d managed to wander through the crowd wearing a combination of black shorts and a white shirt.

The organisers did however state that despite the rigid rules ‘originality is encouraged as long as it’s stylish and tasteful’ – with one man turning up in a native American headdress. 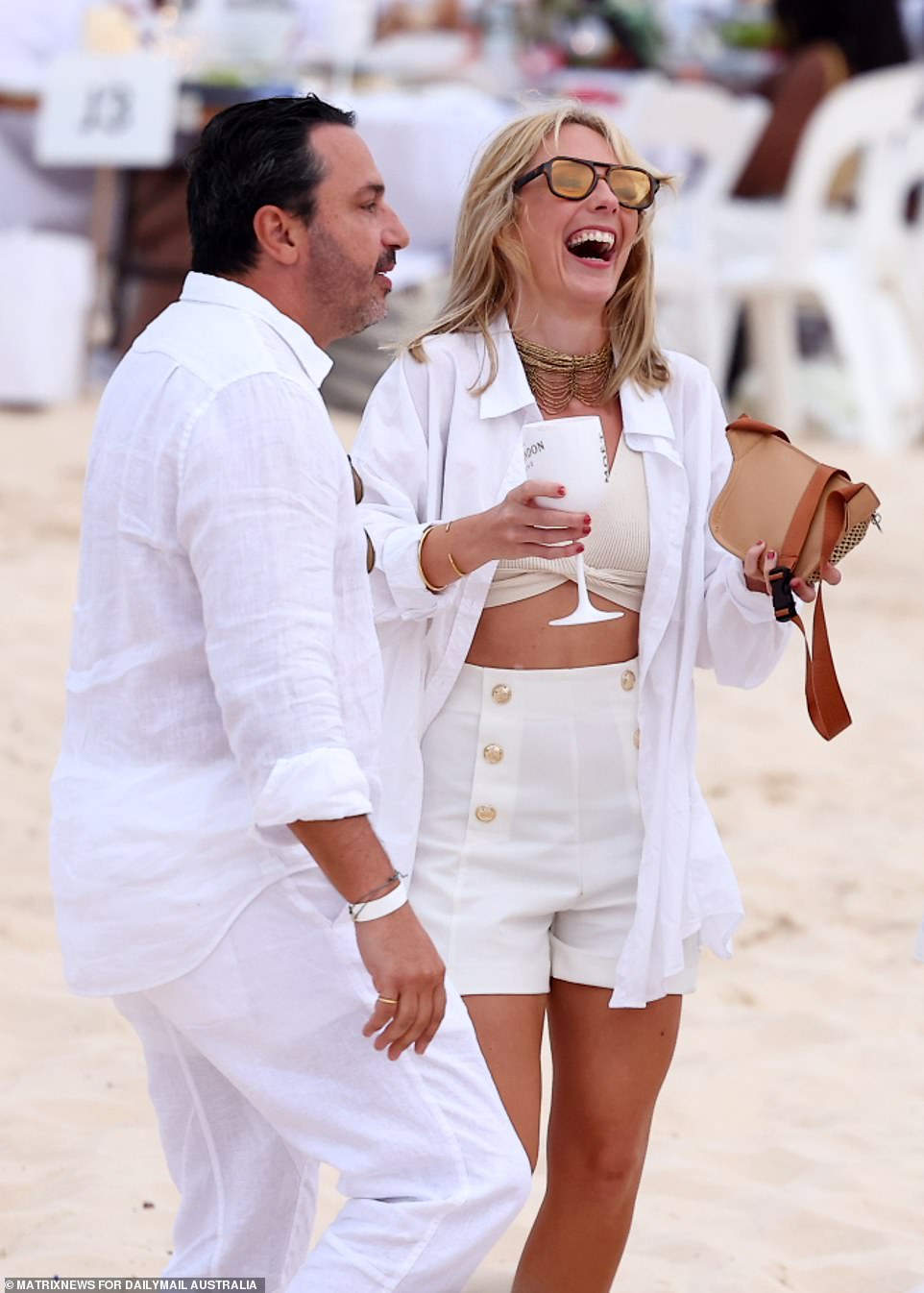 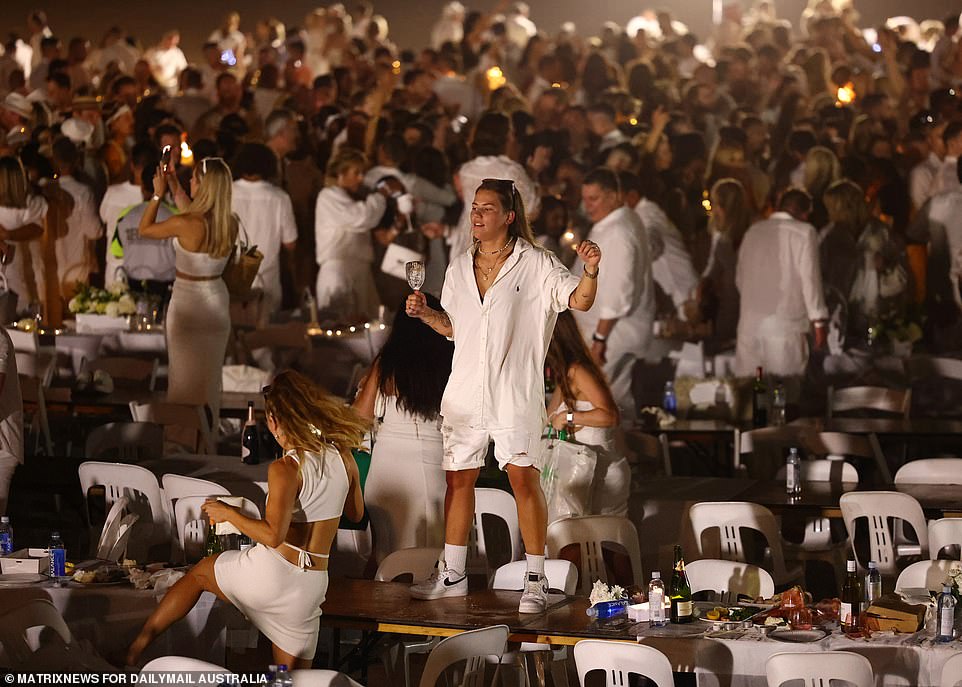 As the sun went down, attendees were keen to let their hair down with one woman seen dancing on a table 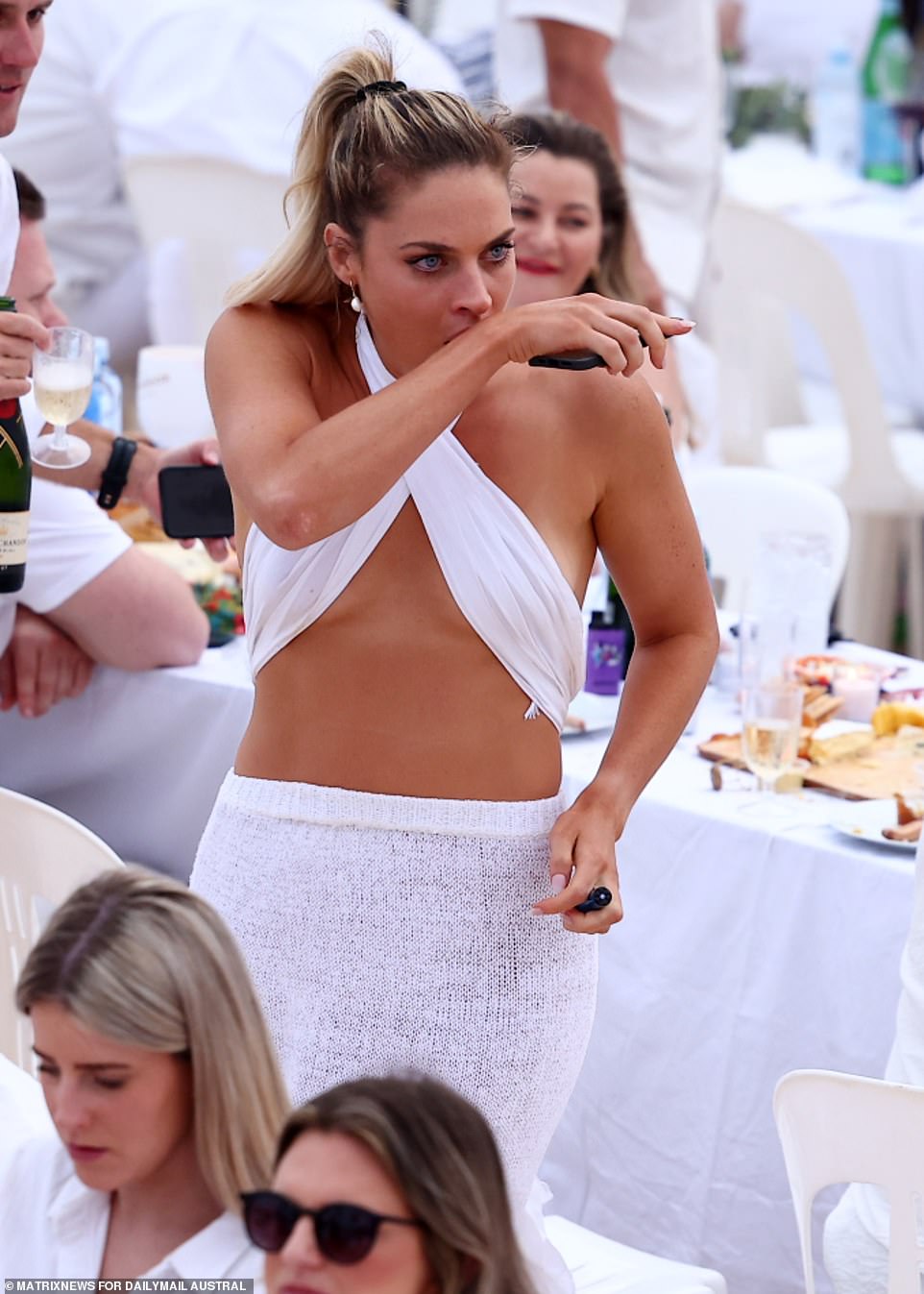 Guests had to bring their own food, with glassware also banned in the event 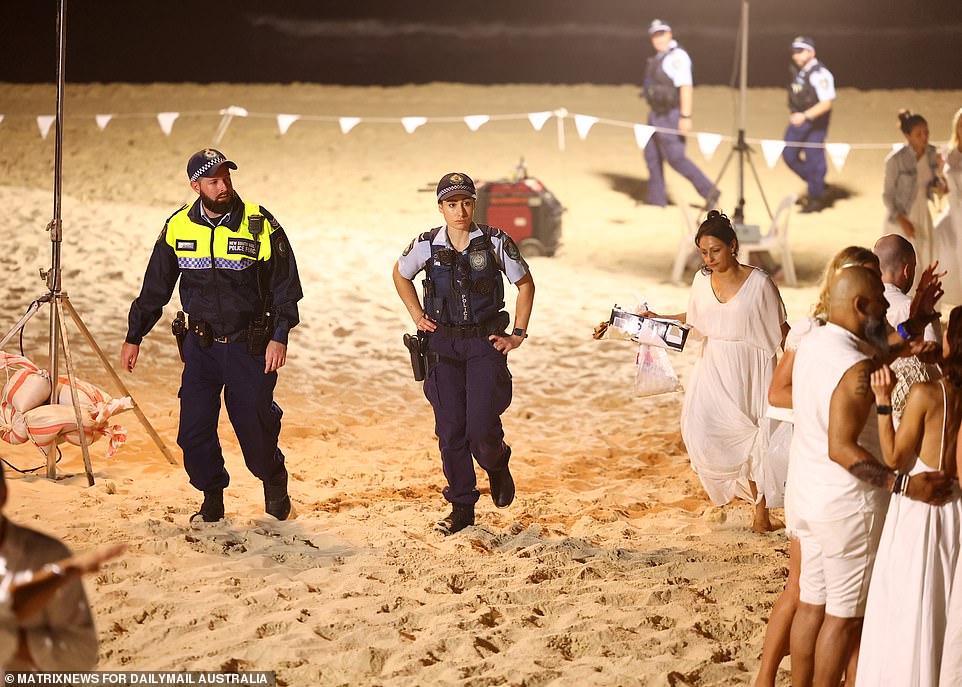 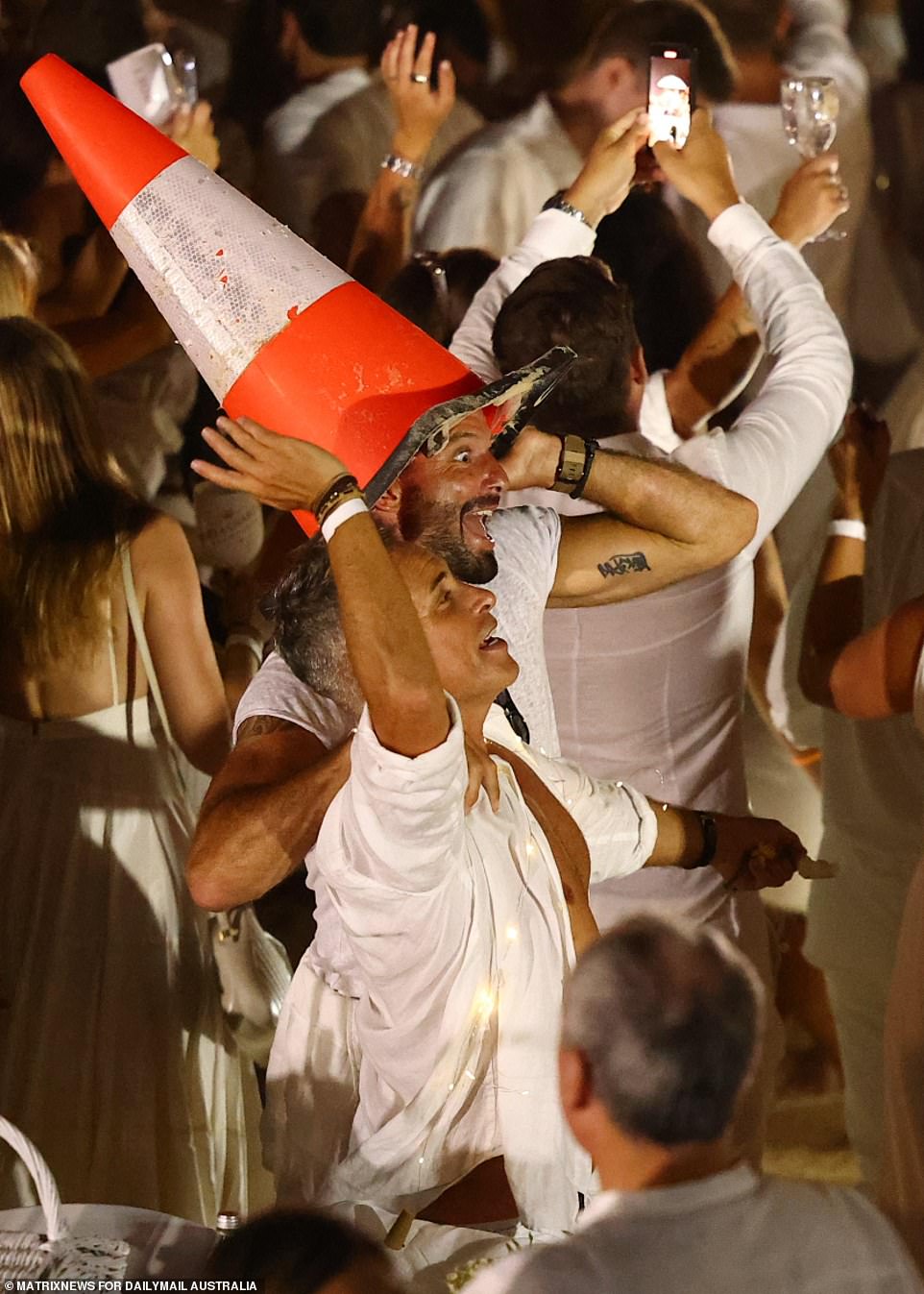 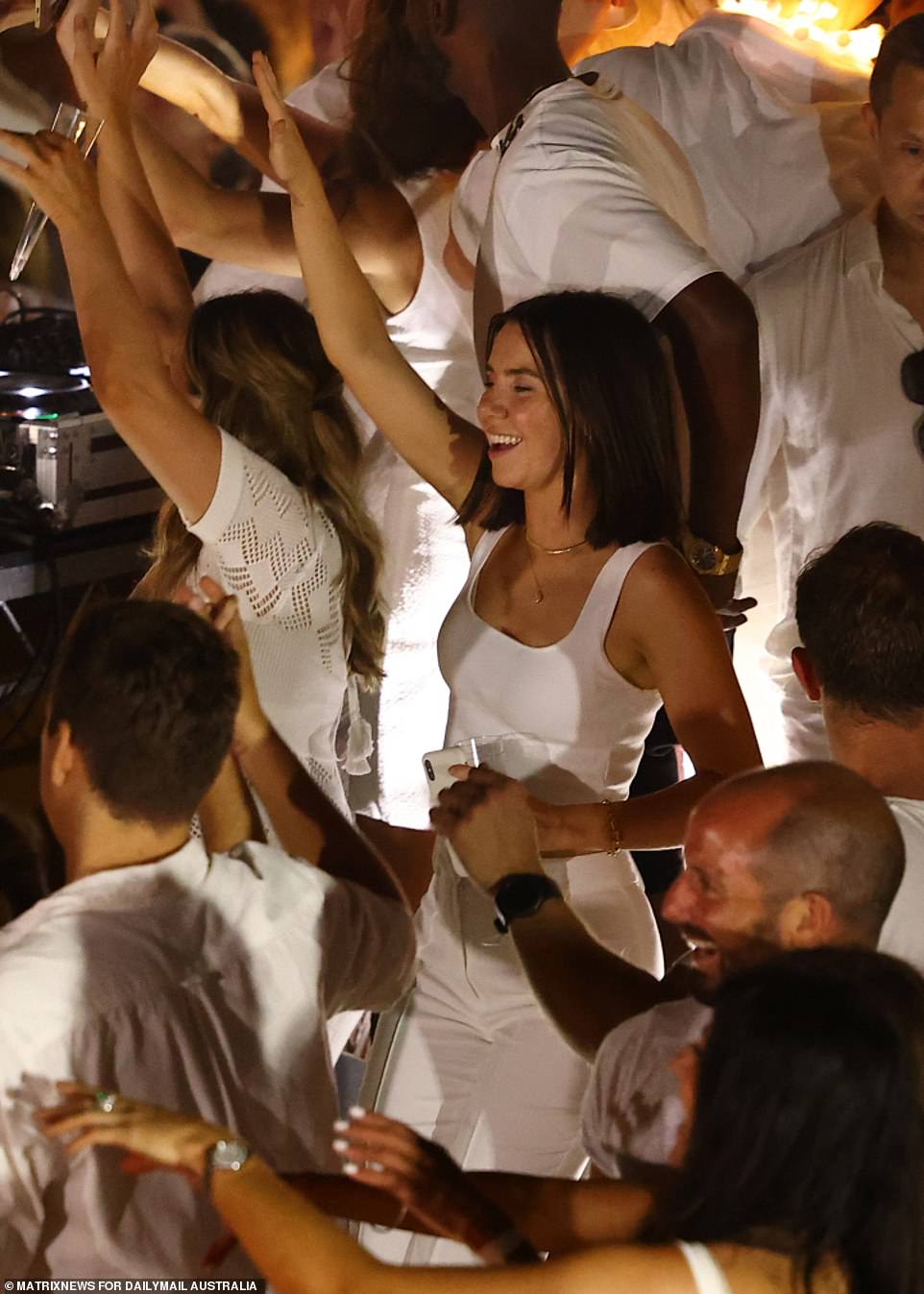 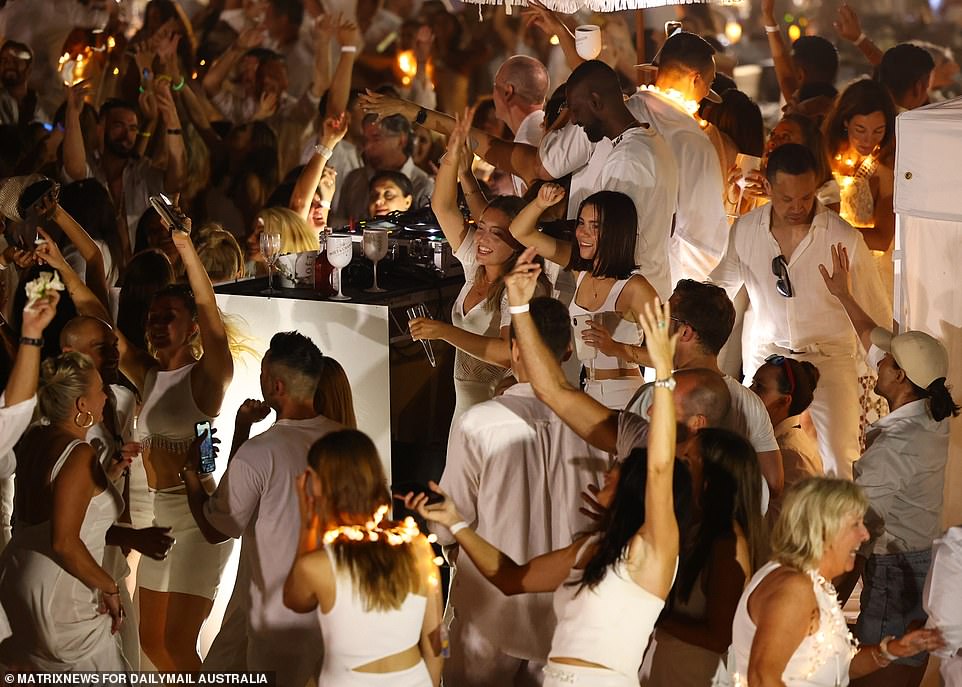 5,000 revellers all in white created a spectacular sight on the famous strip of sand

Those who bought lower-tier tickets had to bring their own tables and chairs – though they too faced strict conditions – while others could pay for them to be set up.

Guests, who must attend in at least pairs. were told they must bring a ‘white tablecloth and two white napkins’.

While some did bring their own furniture, most had been set up by organisers ahead of the event.

Glassware was also banned, while guests were encouraged to bring their own table decorations, and plates and cutlery. Disposable plates were not accepted. 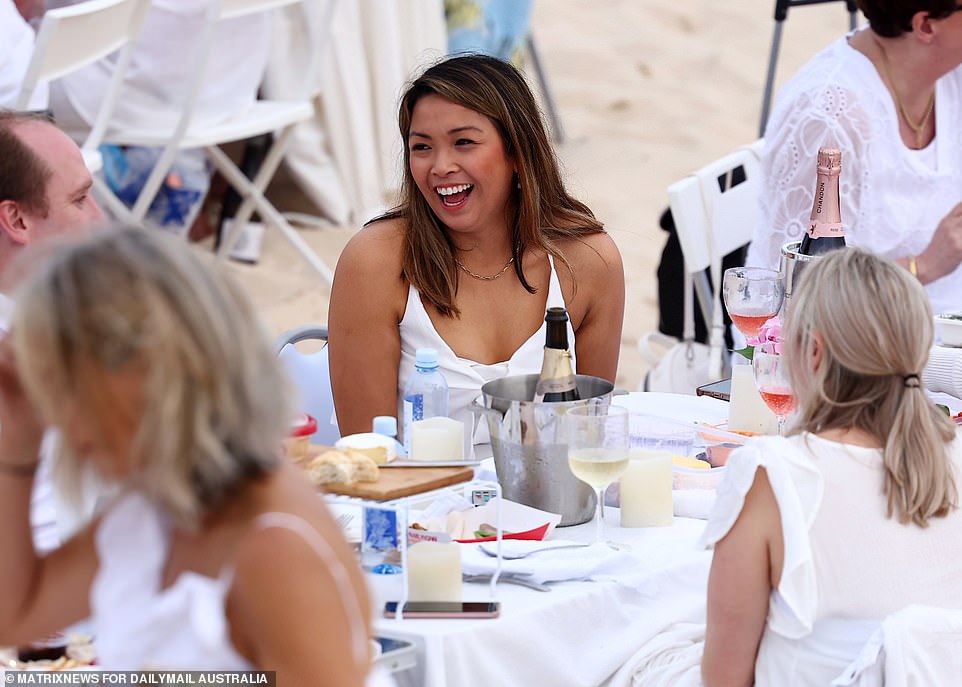 Glassware was also banned, while guests were encouraged to bring their own table decorations, and plates and cutlery. Disposable plates were not accepted 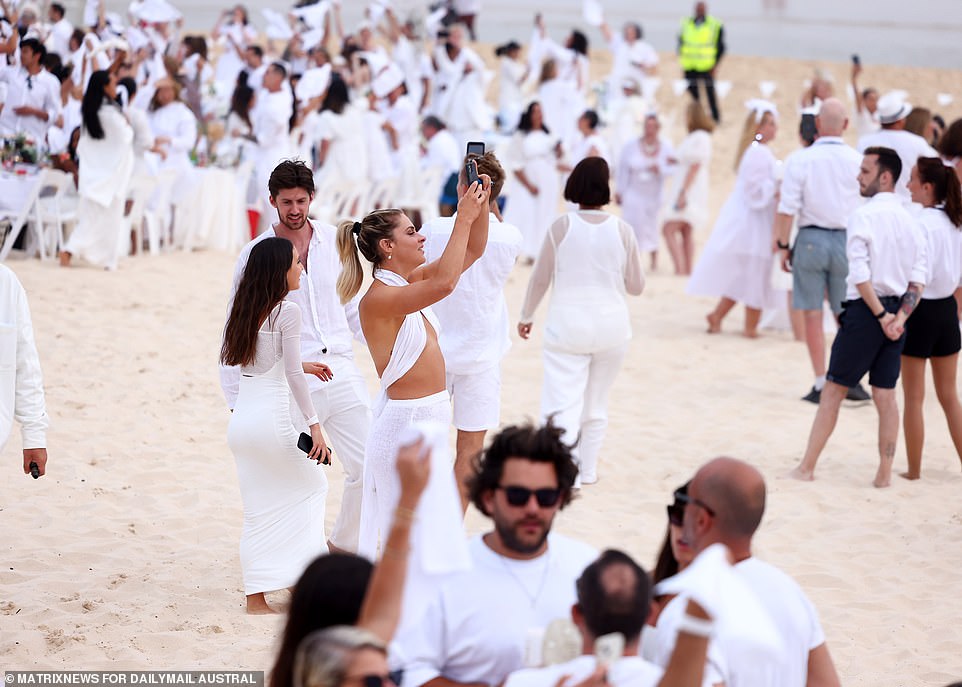 Most people followed the strict dress code, but a few could be seen wearing what looked like banned outfits

All guests must dress in white from head to toe – no ivory, no off-white, and no beige

Champagne or wine is the only alcohol permitted. No spirits or beer are available. Alcohol can only be ordered at the event, no BYO

Random bag searches will be carried out on entry

Once confirmed, participation becomes mandatory, regardless of weather conditions (i.e. it’s on rain or shine)

Guests must book tickets in pairs or groups. Nobody can arrive alone

Attendees must take their rubbish with them 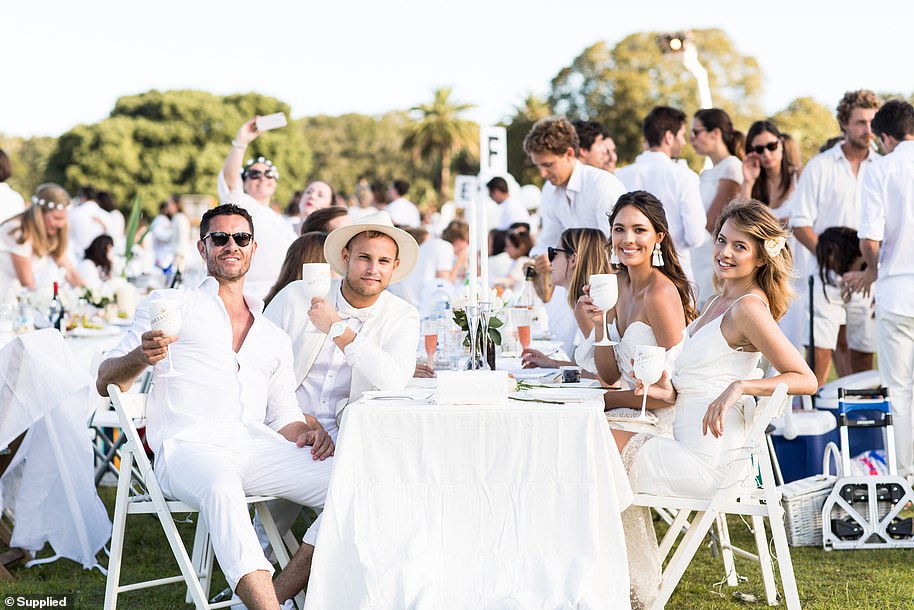 Paying guests are required to bring their own food, tables and chairs unless they pay extra and all wine must be pre-purchased from the organisers (pictured: a previous year’s event in Hyde Park in Sydney)

Another key rule to maintain the event’s good reputation is the ‘zero tolerance’ towards ‘uncontrolled drunken behaviour’.

‘Le Dîner en Blanc requires from its guests an exemplary citizenship and discipline,’ one rule stated.

‘A friendly, convivial and festive attitude is A MUST.’

Dîner en Blanc is also being held in Canberra on November 26. 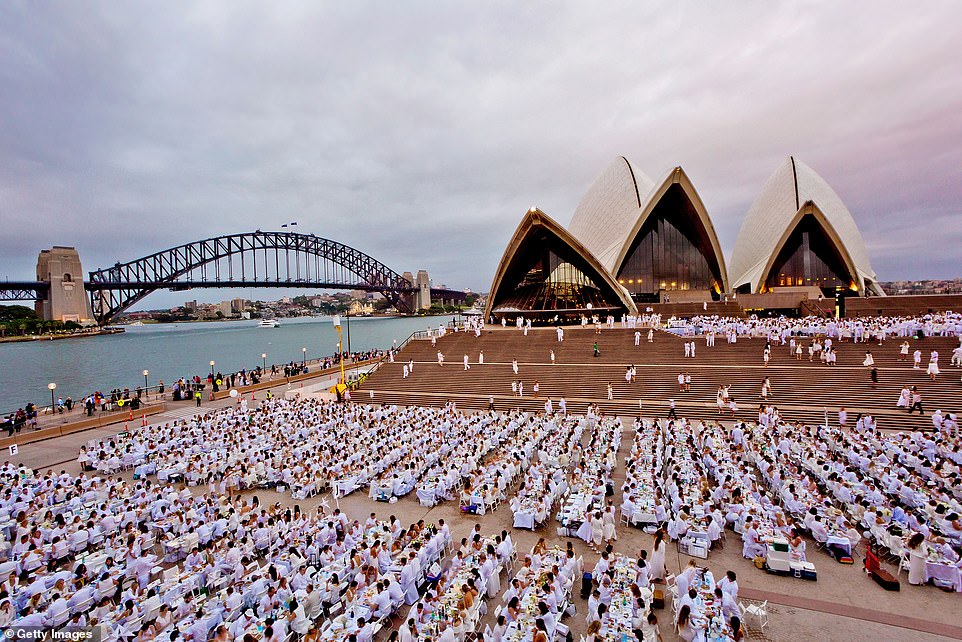 The 2015 Sydney event was held outside the Opera House and attended by 4,000 people (pictured)

The event had earlier attracted some criticism, including from Bondi Beach Precinct co-convenor Lenore Kulakauskas who said the beach should be available to everyone.

‘It does not have a ”to let” sign hanging on it. Privatisation of the beach for single functions or [commercial club] proposals is against the egalitarian nature of this space,’ she told The Sydney Morning Herald .

Waverley Council argued that while the event would be ‘high impact’ it would be a positive for the area.

The spokesperson said the council would use some of the money for maintenance of public spaces and to fund other free events available to the whole community. 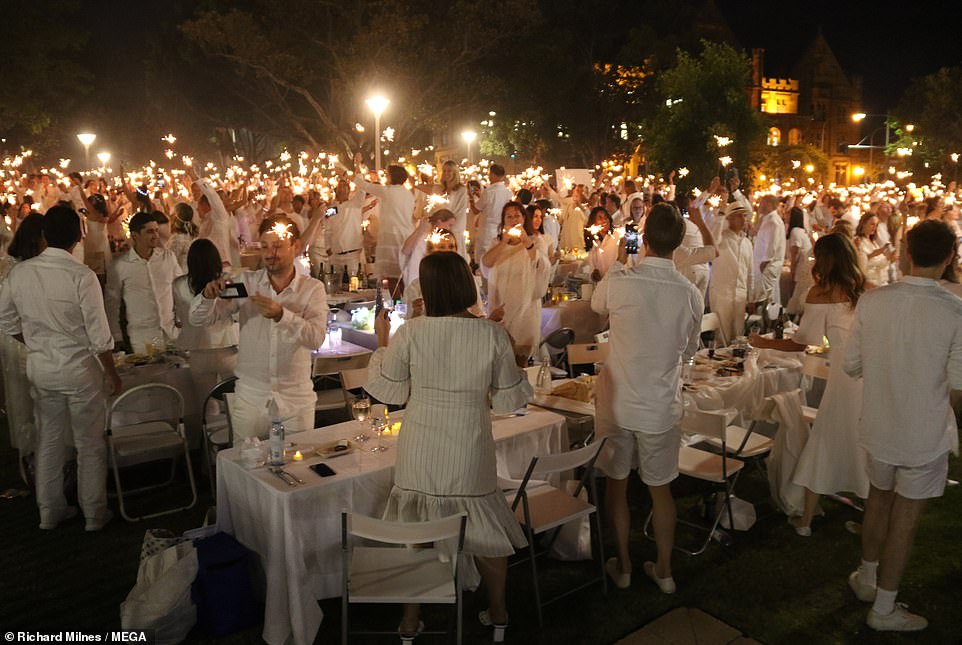 White napkin waving and sparklers are a mainstay for the event (pictured: at Hyde Park in 2018)