Leading doctor says you should think before going to GP

Professor Helen Stokes-Lampard said too many patients were turning up to surgeries with heartburn and other minor ailments.

Instead they should treat themselves, look up their symptoms online or go to a pharmacist before phoning the GP.

The head of the Royal College of GPs said that even if only one in ten patients avoided going to the surgery, it would free up 100,000 appointments a day.

Professor Helen Stokes-Lampard said patients should treat themselves, look up their symptoms online or go to a pharmacist before phoning the GP for an appointment

GP services across England are struggling to cope with the pressures of the rising and aging population on top of a recruitment crisis.

They are particularly busy at this time of year dealing with the flu and winter vomiting bug. In recent weeks NHS officials have been strongly encouraging patients to see their GP rather than going to overstretched A&E units.

But Prof Stokes-Lampard – who practises in Lichfield, Staffordshire – urged patients to follow a ‘three before GP’ rule of thumb.

‘We’re just asking people to stop and think, when you reach for the phone to book a GP appointment: ‘Can I do this myself? Do I need some online help? Could a pharmacists help me?’ ‘

Prof Stokes-Lampard added: ‘We believe that up to a quarter of appointments could be avoidable or sorted out by another means.

‘Of course for many things you’ll still be phoning the GP and that’s fine – that’s what we’re here for.

‘But if just 10 per cent of people didn’t come and see their GP, but did one of those three things, that would make a huge difference.

‘It would give us the capacity to deal with those who really need our help at a difficult time for the whole NHS.

‘Today, over a million people will be seeing a GP. If 100,000 of those were seen elsewhere, the difference that would make.

‘For example, yesterday in surgery people were coming in with indigestion – this is a classic one at this time of year. 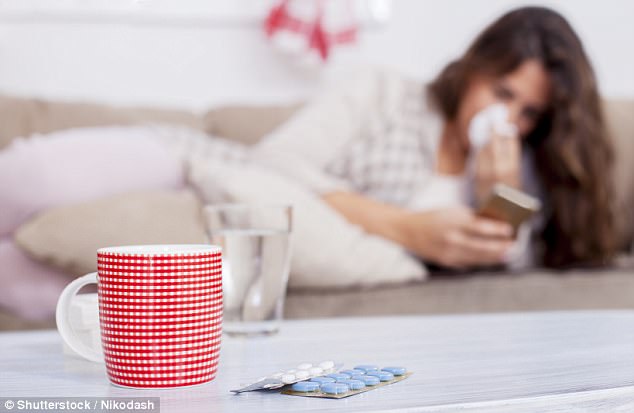 The head of the Royal College of GPs said that even if only one in ten patients avoided going to the surgery, it would free up 100,000 appointments a day (file photo)

‘People eat a bit too much, drink a bit too much, gain a bit of weight in the winter and develop indigestion and heartburn – that’s the sort of thing where a pharmacists could easily signpost them to a range of medications.’

Norman Lamb, the Liberal Democrats’ former health minister, said: ‘Fundamentally, this is sound advice – it is not always appropriate to go to a GP.

‘However, the risk is that with general practice under impossible strain, patients who really need to see their doctor do not go.’

Chloe Westley, campaign manager at the TaxPayers’ Alliance, said: ‘It’s deeply disappointing that the NHS is struggling to provide essential services, while so much money is wasted on non-essential prescriptions and paying for top NHS bureaucrats.

‘It’s time for the NHS to cut out waste and prioritise providing the essential services that we pay for.’

The Government has promised to hire an extra 5,000 GPs by 2020 but figures last month showed that 1,200 had quit in the previous year.

Many older doctors are retiring early to avoid hefty pension taxes, or moving to Australia and New Zealand for a better life balance.

They are not being replaced by trainee doctors who regard a GP career as second rate compared with becoming a surgeon or cancer specialist.

Prof Stokes-Lampard said: ‘There are measures being put in place to train more GPs – and in fairness there are now more doctors training to be GPs than ever before – but that takes time to come through the system.

‘But all of this is too little too late for some – we hear of practices closing at an alarming rate.’

A Department of Health spokesman said: ‘We recognise that GPs are under a lot of pressure.

‘That is why we have committed to an extra 5,000 doctors in general practice by 2020 – supported by investment of an extra £2.4 billion a year by 2020 to improve care and deliver better patient access.’