Andrea Leadsom defied Theresa May and signalled a new Brexiteer revolt today as she urged the Prime Minister to use a trip to Berlin to demand a ‘proper Brexit’.

The Commons Leader said Mrs May should tell Angela Merkel to make the EU re-write the Brexit divorce deal and tear up the Irish border backstop.

Following the first hammering of her deal, Mrs May asked the EU to reopen the deal to change the backstop – a provision designed to avoid a hard border in Ireland even if UK-EU trade talks fail – and was rebuffed.

Mrs Merkel herself has repeatedly said the deal, negotiated over the past two years, cannot be renegotiated.

But Mrs Leadsom went rogue today and insisted she had heard ‘rumours’ the German government might finally be prepared to budge at the 11th hour.

Downing Street dismissed the plea as Mrs May’s spokesman said the PM ‘set out in her statement to Parliament last week that the EU has repeatedly said it cannot and will not reopen the withdrawal agreement’.

In a further escalation of a Brexiteer revolt, Trade Secretary Liam Fox wrote to Tory MPs to insist a permanent customs union with the EU would be the ‘worst of both worlds’.

The Government is in talks with Labour on changing the political declaration outlining the permanent trade deal amid claims she could concede a customs union.

The day was capped with a huge Tory rebellion on Mrs May’s proposed second delay to Brexit.

There were 97 Tory votes against the plan to delay Brexit until the end of June, with an early escape if the deal passes. Another 80 MPs – including Mrs Leadsom and Dr Fox – abstained as the measure passed 420-110 with Labour votes.

As the revolt broken out in London today, Mrs May travelled to Berlin and Paris to beg for help as she asks for a second delay to Brexit. 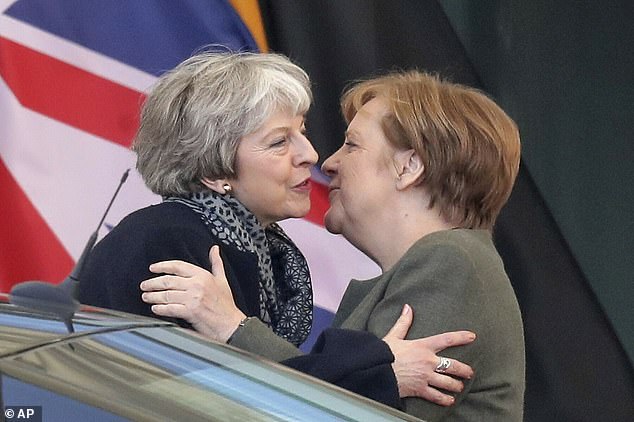 Ahead of the showdown, Mrs Leadsom said: ‘What I think would be fantastic if Angela Merkel will try to support a proper UK Brexit by agreeing to reopen the Withdrawal Agreement.

What is a customs union and what could happen if we are in one after Brexit?

The customs union has emerged as possibly the last crucial battleground in the political war over Brexit.

The customs arrangements could decide the fate of the overall deal – as the UK has already said it will ensure there is no hard border between Northern Ireland and the Republic.

But it has proved a major bone of contention for Brexiteers, with many publicly and privately voicing their fury at it.

The are furious that adopting one would keep us far too closely aligned with Brussels but without any say over our international trade policy.

What is the EU customs union?

The customs union allows the EU states to exchange goods without tariffs, and impose common tariffs on imports from outside the bloc.

But they also prevent countries from striking deals outside the union on their own.

Theresa May has repeatedly made clear that the UK will be leaving the customs union, while Labour says it wants to replicate it but without being in it.

How would that work?

Some MPs and the Labour leadership have raised the idea of creating a new customs union with the EU.

This could be looser than the existing arrangements, but still allow tariff free trade with the bloc.

Labour’s alternative plan also suggested that it would also be possible to be in a customs union and influence EU trade deals.

However this is against EU law and the party  has not explained how this would work.

Many Eurosceptics believe it is impossible to be in a union without hampering the UK’s ability to strike trade deals elsewhere.

They also complain that it would mean accepting the EU’s ‘protectionist’ tariffs against other parts of the world in areas like agriculture.

The most high profile of these is International Trade Secretary Liam Fox – whose job would be pointless if we were in a customs union.

The PM has also ruled out this option but there are signs that she is wavering as she seeks a way out of the current Brexit chaos engulfing Westminster.

‘There have been rumours over the weekend that some senior members of the German government would be willing to do that in order to get Theresa May’s deal across the line.

‘If we could get the prime minister’s deal over the line because the EU have decided to support measures on the backstop then that would be the best possible outcome.’

But ahead of the talks German EU minister Michael Roth played down hopes of a shift from Berlin. He said: ‘It’s groundhog day again.

‘Unfortunately I have to say that the conditions the European council has decided on in its last meeting have not been met. This means time will run out on 12 April.’

He added: ‘Of course the EU continues to be willing to talk, there is also a letter by the prime minister, May.

‘We will very carefully have to look at this letter. We are finally expecting substantial steps in the right direction. So far absolutely nothing has changed.

‘Of course we are also thinking about such a deadline extension, including a long extension of the deadline, but this also has to come with very strict criteria.

‘For example, it cannot be that there are speculations without an obligation of the British side to also partake in the European elections. Therefore we are in a very frustrating situation and the EU has to finally also take care of issues of the future.

‘We might also have to give the British side time so they can finally be clear about what they actually want. Apparently the very late talks with the British opposition have not led to any progress whatsoever either.’

In March, the EU formalised new ‘assurances’ on how the backstop would work, attaching two new documents to the Withdrawal Agreement negotiated by the EU’s Michel Barnier and UK officials.

But the papers were not enough to convince Attorney General Geoffrey Cox to change his legal advice there was a risk the backstop could last forever if trade talks falter.

The backstop effectively ties the UK into the EU customs union between the end of the planned two-year transition period and the start of a permanent trade deal.

Brexiteers hate it because they fear it will be the basis of that trade deal – meaning no post-Brexit trade deals – and it will be impossible to leave if trade talks fail.

The DUP also say the protocol creates a border between Great Britain and Northern Ireland because the province would have to stay inside additional single market rules. 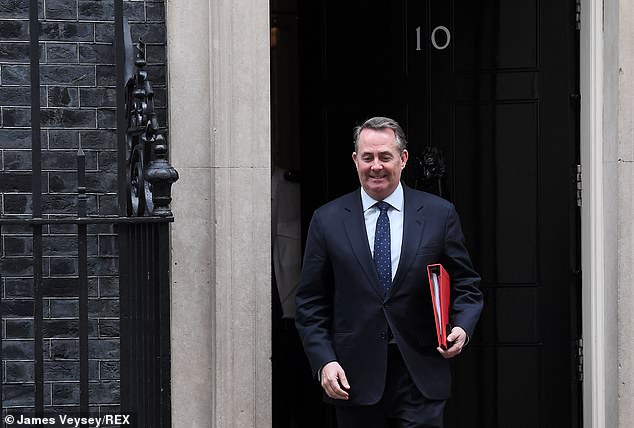 In a further escalation of a Brexiteer revolt, Trade Secretary Liam Fox (pictured yesterday in Downing Street) wrote to Tory MPs to insist a permanent customs union with the EU would be the ‘worst of both worlds’

The second Brexiteer intervention today from Dr Fox came in an incendiary letter to the 1922 Committee of backbench MPs.

Talks are thought to be focused on whether a form of customs union could be acceptable enough to both parties to pass the main Withdrawal Agreement with Labour votes.

But in a letter revealed by the Telegraph, Dr Fox told Tory MPs: ‘We would be stuck in the worst of both Worlds, not only unable to set our own international trade policy but subject, without representation, to the policy of an entity over which MPs would have no democractic control.

‘This is something that Labour do not presently seem to understand. As I said at the meeting, in such a scenario the UK would have a new role in the global trading system.

‘We would ourselves be traded. As the famous saying in Brussels goes, if you are not at the table, you are on the menu.’

Mrs Leadsom’s intervention will be widely seen as manoevering ahead of the expected Tory leadership race.

She lost out to Mrs May almost three years ago after a scandal over remarks to a newspaper that she would be a better PM because she was a mother. 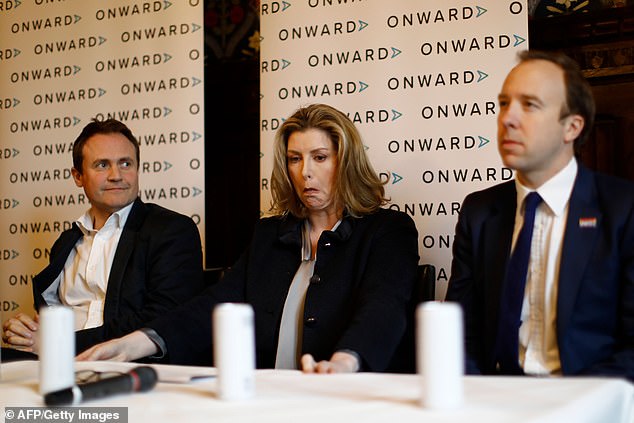 Mrs Leadsom’s intervention will be widely seen as manoevering ahead of the expected Tory leadership race. Rivals (from left) Tom Tughendhat, Penny Mordaunt and Matt Hancock were also out today at event for the Onward think tank

What is the Irish border backstop and why do Tory MPs hate it?

The so-called Irish border backstop is one of the most controversial parts of the PM’s Brexit deal. This is what it means:

The divorce deal says it will kick in automatically at the end of the Brexit transition if that deal is not in place.

This means many EU laws will keep being imposed on the UK and there can be no new trade deals. It also means regulatory checks on some goods crossing the Irish Sea.

Because Britain demanded to leave the EU customs union and single market, the EU said it needed guarantees people and goods circulating inside met EU rules.

This is covered by the Brexit transition, which effectively maintains current rules, and can in theory be done in the comprehensive EU-UK trade deal.

But the EU said there had to be a backstop to cover what happens in any gap between transition and final deal.

Getting out – even if there is a trade deal – can only happen if both sides agree people and goods can freely cross the border.

Brexiteers fear the EU will unreasonably demand the backstop continues so EU law continues to apply in Northern Ireland.

What concessions did Britain get in negotiating it?

During the negotiations, Britain persuaded Brussels the backstop should apply to the whole UK and not just Northern Ireland. Importantly, this prevents a customs border down the Irish Sea – even if some goods still need to be checked.

The Government said this means Britain gets many of the benefits of EU membership after transition without all of the commitments – meaning Brussels will be eager to end the backstop.

It also got promises the EU will act in ‘good faith’ during the future trade talks and use its ‘best endeavours’ to finalise a deal – promises it says can be enforced in court.

What did the legal advice say about it?

Attorney General Geoffrey Cox said even with the EU promises, if a trade deal cannot be reached the backstop could last forever.

This would leave Britain stuck in a Brexit limbo, living under EU rules it had no say in writing and no way to unilaterally end it.