The organisation that represents 35 leagues in 28 European countries has told UEFA to scrap its plans for reforming club football from 2024 onward and start the project ‘from scratch’.

The stark message to European football’s governing body emerged from a meeting of European Leagues’ board of directors in Warsaw on Thursday.

The outgoing bosses of the English Football League and Premier League, Shaun Harvey and Richard Scudamore, respectively, are among the 13 men on the board.

In a statement, European Leagues said the board ‘retained the strong opinion that the presented proposal for reforming the European club competitions benefits just a few rich and dominant clubs but damages the leagues and the great majority of clubs playing in the domestic competitions’.

This position, it said, follows last week’s European Leagues summit in Madrid and the subsequent meeting with UEFA’s executive committee in Nyon.

‘The European Leagues are working on changes which contribute to the long-term sporting and financial sustainability of both European and domestic club competitions,’ it continued.

‘In this, the leagues believe that it is imperative for UEFA to start building the changes in the UEFA club competitions project from scratch.’

While UEFA might be a little surprised at the direct language it can hardly say it did not see this coming – domestic leagues throughout Europe have been up in arms ever since details of the proposed changes first emerged.

Drawn up by UEFA and the European Club Association, the organisation that represents more than 230 of Europe’s richest clubs, the plans would see the Champions League group stage change from eight groups of four to four groups of eight, meaning more games, with a promotion and relegation system from year to year which would reduce the number of places available via the previous season’s domestic competitions.

The Premier League were the first to speak out about this publicly last month but, on Wednesday, league meetings in France and Germany both emphatically rejected the proposals, while the president of Spain’s LaLiga, Javier Tebas, has also been a vocal critic. 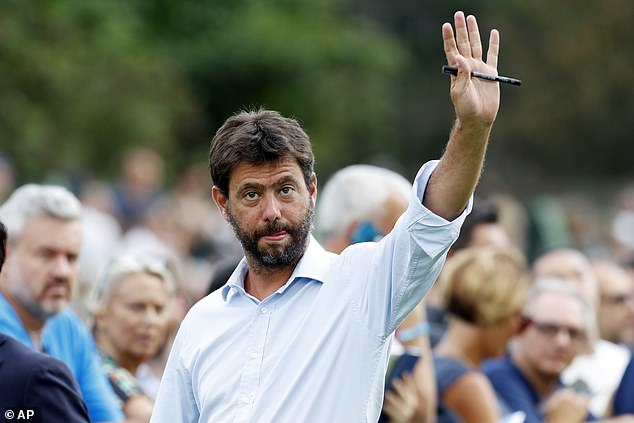 The idea’s biggest champion is Andrea Agnelli, the chairman of the ECA and Italian side Juventus, but he was backed on Wednesday by ECA vice-chairman Dariusz Mioduski, who is also chairman of Polish champions Legia Warsaw.

In a letter to the bosses of clubs and leagues around Europe, Mioduski explained that the reforms are needed in order to tackle the increasing domination of Europe’s five biggest leagues – the top tiers in England, France, Germany, Italy, and Spain – over the other 50 national leagues.

Singling out Tebas for criticism, Mioduski wrote: ‘In reality, any league (and club, big or small) not belonging to the top five richest countries should be aware that Mr Tebas is not representing or protecting them.

‘While he says what clubs and leagues in the 50 ‘other’ countries want to hear, he is really protecting and promoting the interests of the true oligarchs of a system that is increasingly unfair and unequal.

‘Those oligarchs are not the top clubs (although they are not without fault), they are the top five richest European leagues.’

The solution, he claimed, is to give the ‘have nots’ more access to the Champions League, Europa League and Europa League 2, which starts in 2021, and a fairer share of European broadcast income.