Crawley Town are on the cusp of being taken over by a Singapore-based consortium.

Sportsmail understands Qiang Bai, who owns vSport, a cryptocurrency platform backed by blockchain technology, is nearing a takeover worth around £7million of the League Two side.

vSport previously looked into purchasing Blackpool, who have recently gone into receivership, and met the infamous Owen Oyston.

Qiang Bai (left), pictured with Owen Oyston and Alexander Jarvis of Blackbridge, who helped facilitate investment into Barnsley and Peterborough, is on the brink of buying Crawley Town

Bai is thought to be keen on Crawley in part due to their location – near Gatwick Airport.

Gatwick is likely to expand in the coming years and that would mean an increased population in the area and a growing fanbase for Crawley – increasing its value.

There are not thought to be any concerns over Crawley’s current league position – they are 18th in League Two. 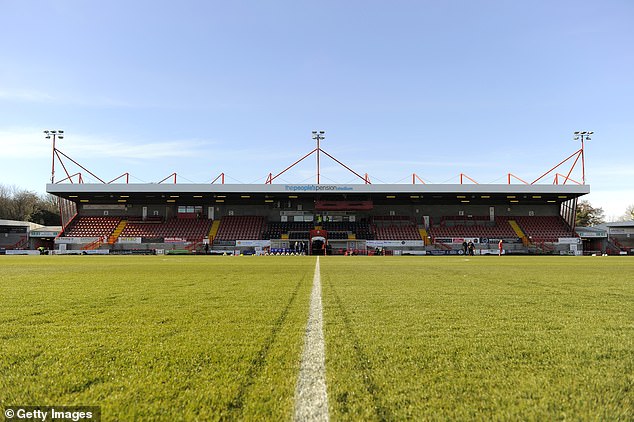 It has been noted that current Premier League side Bournemouth were in the fourth-tier before a staggering rise through the divisions.

A deal would still need to be ratified by the EFL and Bai would have to pass the owners’ and directors’ test, although it is understood there are no concerns he would not do so.

Crawley are currently owned by Turkish businessman Ziya Eren, who is in his third season in charge.