It seems that Facebook’s long-held mentality of ‘Move Fast and Break Things’ keeps coming back to bite it.

A newly leaked internal memo, written by top Facebook executive Andrew ‘Boz’ Bosworth’ in June 2016, gives a candid look into how far the tech giant was willing to go in order to become the world’s most popular social media platform.

In the memo titled ‘The Ugly’, Bosworth admits that the firm engages in ‘questionable contact importing practices’ and uses ‘subtle language that helps people stay searchable by friends’ — all for the purpose of growing the service, according to a BuzzFeed report.

He even ventures as far as to say that if connecting people causes someone to ‘die in a terrorist attack coordinated on our tools’ that it’s all part of the effort to achieve growth.

The firm’s collection of user call logs and messages has been a core revelation of the ongoing data scandal.

‘We’ve never believed the ends justify the means,’ Zuckerberg said in a statement to BuzzFeed.

‘We recognize that connecting people isn’t enough by itself. We also need to work to bring people closer together.

‘We changed our whole mission and company focus to reflect this last year,’ he added.

Zuckerberg went on to say that Bosworth is a ‘talented leader who says many provocative things,’ but said the memo was something that ‘most people at Facebook including myself disagreed with strongly.’

Some Twitter users called for Bosworth to resign as a result of the memo being leaked.

The firm’s data collection tactics have been in focus after it was revealed that 50 million members’ data had been harvested without their knowledge.

Bosworth’s years-old comments appear in stark contrast to what has been said publicly by Facebook in the wake of the Cambridge Analytica row.

Facebook boss Mark Zuckerberg and COO Sheryl Sandberg have made the rounds in recent days to apologize for how it mismanaged users’ data and have announced several steps to remedy the situation, including banning user data from third-party aggregators. 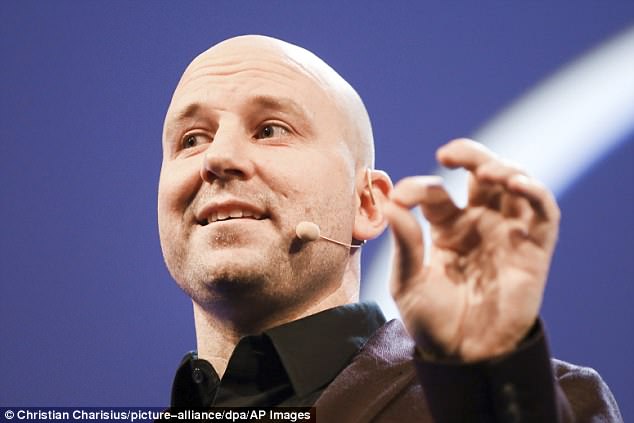 Facebook’s VP of consumer hardware Andrew ‘Boz’ Bosworth (pictured) joined the company in 2006 from Microsoft. Since then, he’s become one of CEO Mark Zuckerberg’s top lieutenants

But Bosworth seemed to show little remorse for the unintended consequences of Facebook’s controversial data collection techniques, which he says is all for the goal of ‘connecting people’.

‘We connect people. Period. That’s why all the work we do in growth is justified,’ Bosworth wrote in the memo.

‘…That can be bad if they make it negative.’

‘Maybe it costs a life by exposing someone to bullies.’

‘Maybe someone dies in a terrorist attack coordinated on our tools.’

‘And we still connect people,’ he added.

Since joining Facebook in 2006 from Microsoft, Bosworth has risen to become one of Zuckerberg’s top lieutenants. He often speaks out in defense of the company on Twitter.

In a statement on Thursday, Bosworth said he ‘didn’t agree’ with the BuzzFeed report. 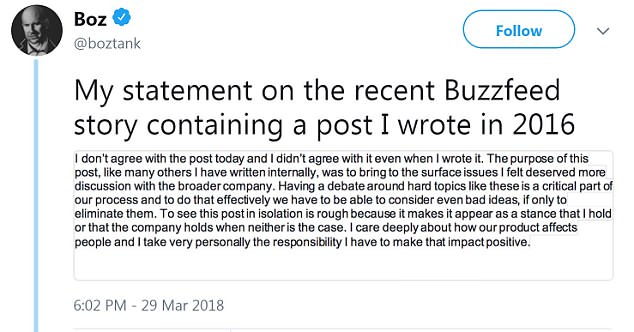 A newly leaked internal memo, written by top Facebook executive Andrew ‘Boz’ Bosworth’ in June 2016, gives a candid look into how far the tech giant was willing to go in order to become the world’s most popular social media platform. ‘Boz’ responded on Twitter today 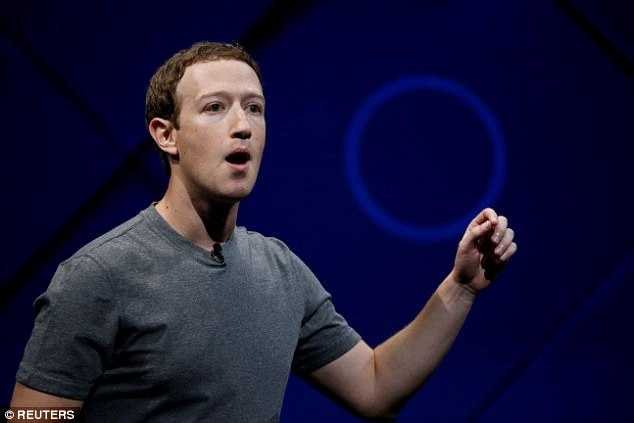 Another former Facebook employee said the memo was just ‘Boz being Boz’.

Others said Bosworth exhibits questionable behaviors at the company.

‘He is definitely a guy who isn’t very diplomatic — he’d blunder into internal debates and internal comms would tend to keep an eye on what he’s doing and posting,’ a former senior Facebook employee told BuzzFeed.

‘The memo is classic Boz because it speaks to the majority of Facebook employee views but it’s also polarizing.’

‘This is clearly a post meant to rally the troops,’ the employee added. 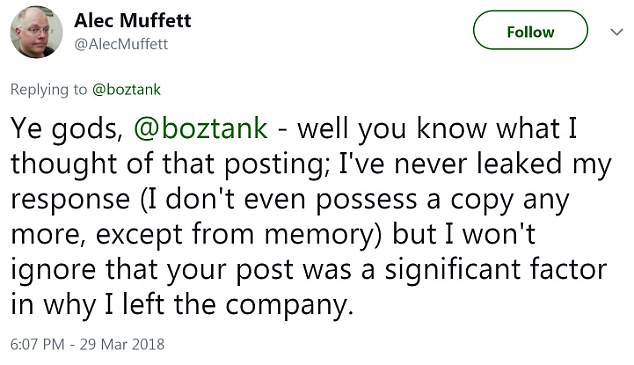 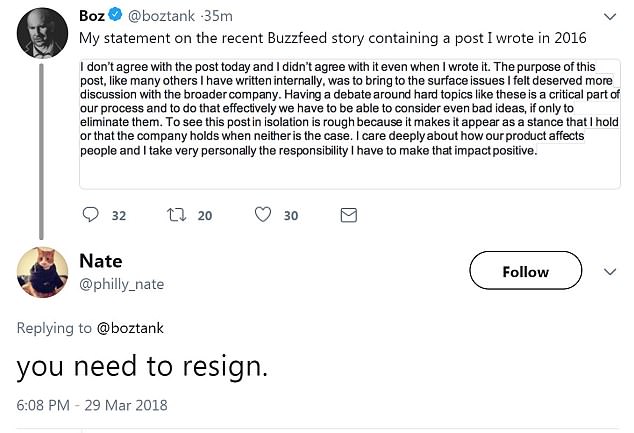 Despite this, the memo gives a glimpse into how some of Facebook’s top executive felt they were doing the right thing by trying to ‘connect people.’

‘The ugly truth is that we believe in connecting people so deeply that anything that allows us to connect more people more often is *de facto* good,’ Bosworth wrote.

‘That isn’t something we are doing for ourselves. Or for our stock price (ha!)’

‘It is literally just we what we do. We connect people. Period.’

BuzzFeed noted that the memo was posted on Facebook in an employee-only group just one day after a Chicago man was shot dead on Facebook Live, the firm’s livestreaming platform.

The firm now boasts 2 billion-plus advertisers — a statistic that has become enticing to many advertisers. 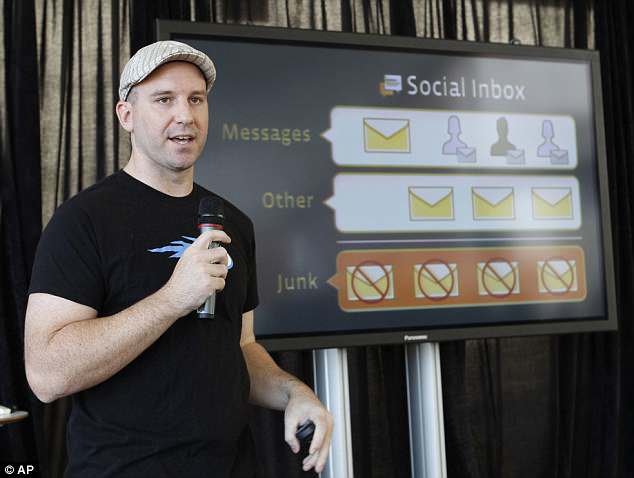 Some Twitter users are saying Facebook’s VP of consumer hardware, Andrew Bosworth (pictured), should resign as a result of the explosive memo leaked by BuzzFeed on Thursday

It’s only now that many Facebook members are waking up to the fact that the firm has access to mountains of personal data, ranging from call logs to messages and other information.

Facebook maintains that it doesn’t sell any user data and doesn’t collect the contents of call logs or messages.

But that hasn’t stopped many users from heavily criticizing the firm’s data collection tactics.

Legislators and data privacy experts are now calling on Facebook to be regulated by the federal government.

In recent days, Zuckerberg has admitted that he believes Facebook and other tech giants should be susceptible to some kind of regulation.

The firm has also taken several steps to try and curb some of its data collection tactics.

The company is removing a feature that allowed marketers to target adverts using information from people’s lives collected outside of Facebook.

Facebook on Wednesday also put all its privacy settings on one page and made it easier to stop third-party apps from using personal information. 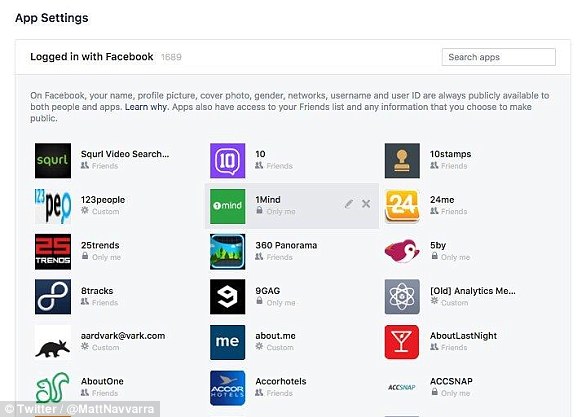