Not quite ready for the test yet! Learner bus driver spectacularly ploughs straight into the side of a popular Sydney pub while training

A learner bus driver has ploughed into the side of a popular south Sydney pub while undergoing training.

The trainee was travelling along Pitt Street, in Mortdale, on Friday morning when he appeared to encounter difficulty negotiating a turn at a forked road.

Failing the pivot, the bus mounted the kerb and crashed into Mortdale Hotel, leaving the vehicle’s front crumpled and debris scattered along the footpath.

It is understood no passengers were onboard at the time of the crash and no one was injured.

Photos posted online show the busted-up bus embedded into the corner of the pub, which sits on the edge of Pitt and George street.

Bystanders gathered to take pictures of the scene as the instructor spoke to his student while repair men worked on the vehicle.

It is understood the corner is a bus stop typically bustling with waiting passengers, including school students, but the accident luckily took place after peak hour.

Social media users were left bemused by the viral photos, with many speculating over the cause of the crash.

‘Takes drive thru bottleo to another level,’ one person joked.

Others weighed in on the driver’s mark on his training test.

‘Driver lost job before getting into [the] job,’ a man joked. 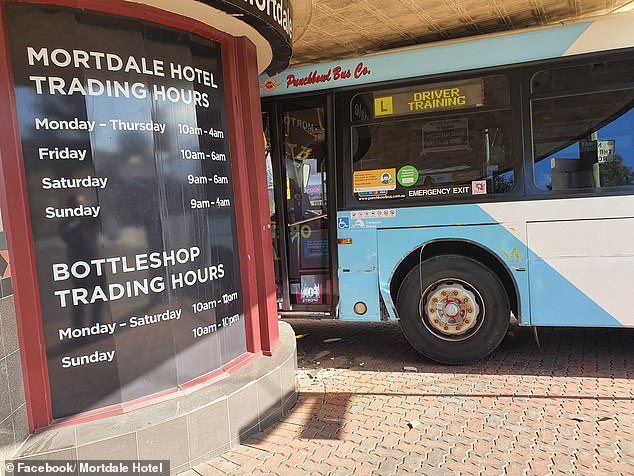 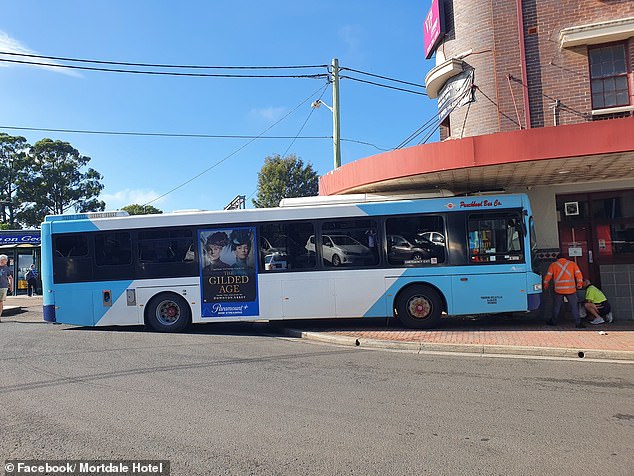 ‘First and last time behind a wheel,’ another wrote.

Someone else chimed: ‘It will cost a carton to get a pass.’

The incident comes just weeks after nine people had to be rescued after a bus crashed into a concrete pylon in Sydney’s west.

The front of the bus split in half after colliding with the pillar at a Seven Hills multi-storey carpark on April 7.

A female passenger aged in her 50s suffering back pain and the bus driver, also aged in his 50s, were both taken to hospital in serious but stable conditions.

The remaining passengers were assessed at the scene by paramedics but sustained no serious injuries.