Woman, 31, is caught drink-driving TWICE in one day on an expired learner’s licence – as cops seize massive stash of alcohol in the back of her Toyota Hilux

An unlicensed learn driver was arrested after testing positive for drink-driving twice in one evening – after she was also found to be transporting a huge stash of alcohol.

The 31-year-old Northern Territory woman will face several charges – including two for medium range drink-driving and two for driving without a current licence – after being caught on the Stuart Highway at 5.30pm and then 8pm on the same day.

NT police found her learner’s licence had expired in 2017.

At 5.30pm she returned a blood alcohol level of 0.125 at Pine Creek Police Station and after being released she was apprehended a second time, when her blood test result was 0.089.

The vehicle, a Toyota Hilux, was carrying nearly 30 litres of alcohol including whiskey, vodka, rum and 58 cans of beer.

It is believed the alcohol – which was destroyed by police – was destined for a remote community, the NT News reported.

‘It is extremely disappointing that we have members of our community not only continuing to drink-drive, but doing so twice in quick succession showed reckless disregard for her own safety and that of other road users,’ said Detective Sergeant Ian Kennon, of the NT Police.

‘Our members will continue to tirelessly enforce the Territory’s road rules for the protection of the community.’

The woman was bailed to appear in Mataranka Local Court on 24 April, 2021. 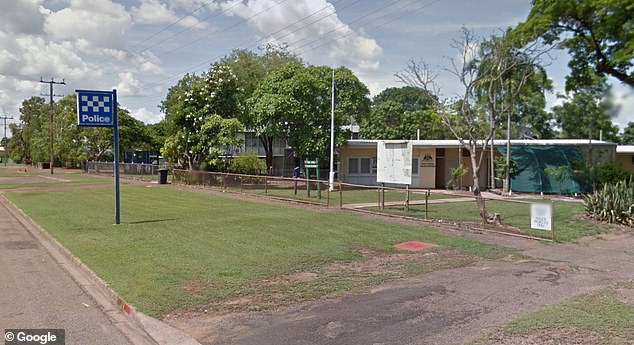 Pine Creek Police Station in the Northern Territory, where the woman returned positive blood alcohol readings twice in one evening