Taking up three new tasks at the same time boosts mental power and protects against Alzheimer’s disease, scientists have found.

These skills may range from language lessons to using an iPad, photography, writing music or painting.

Taking up three new skills, such as language lessons or learning how to use an iPad, at the same time can make older people’s brains three decades younger in just six weeks (file photo)

The course workload would be similar to an undergraduate’s and adds to growing evidence that dementia is avoidable through lifestyle changes.

After less than two months, those in their 80s increased their cognitive abilities to levels similar to those seen in someone in their 50s.

Control group members, who did not take any classes, showed no change in their performance.

Dr Rachel Wu, an assistant professor of psychology at California University, said: ‘The participants in the intervention bridged a 30-year difference in cognitive abilities after just six weeks and maintained these abilities while learning multiple new skills.

HOW CAN I IMPROVE MY BRAIN POWER AS I GET OLDER?

The new study, by researchers at California University, has found that learning multiple new skills simultaneously can improve brain power.

Dr Rachel Wu, an assistant professor of psychology at the university, has said older people can ward off memory loss and confusion by soaking up information like a sponge – as a child would.

Skills trialled in the study include learning how to use an iPad, photography, drawing, and language lessons.

Other studies have suggested working out regularly can improve memory, as can braintraining games and tweaks to your diet.

‘The take-home message is that older adults can learn multiple new skills at the same time, and doing so may improve their cognitive functioning.

‘The studies provide evidence that intense learning experiences akin to those faced by younger populations are possible in older populations, and may facilitate gains in cognitive abilities.’

She says one important way of warding off memory loss and confusion is to soak up information like a sponge – as a child would.

This includes seeking new skills to learn, maintaining motivation as fuel, relying on encouraging mentors to guide you and thriving in an environment where the bar is set high.

Likewise, her team came up with the theory that learning multiple new skills in an encouraging environment should increase the grey matter of older people.

The prize would be maintaining independence in old age.

Building on lifelong learning research, previous studies have shown gains for those who take up photography, acting or other hobbies later in life. But these were learned one at a time, or sequentially.

The study, published in The Journals of Gerontology, Series B: Psychological Sciences, involved 58 to 86-years-old who simultaneously took three to five classes for three months.

They lasted a total of about 15 hours a week and included Spanish, learning to use an iPad, photography, drawing/painting and music composition.

The 42 participants completed cognitive assessments before, during, and after the studies.

These measured working memory such as remembering a phone number for a few minutes, cognitive control which is switching between tasks and episodic memory like remembering where you have parked.

Added Dr Wu: ‘The take-home message is that older adults can learn multiple new skills at the same time, and doing so may improve their cognitive functioning.

‘The studies provide evidence that intense learning experiences akin to those faced by younger populations are possible in older populations, and may facilitate gains in cognitive abilities.’ 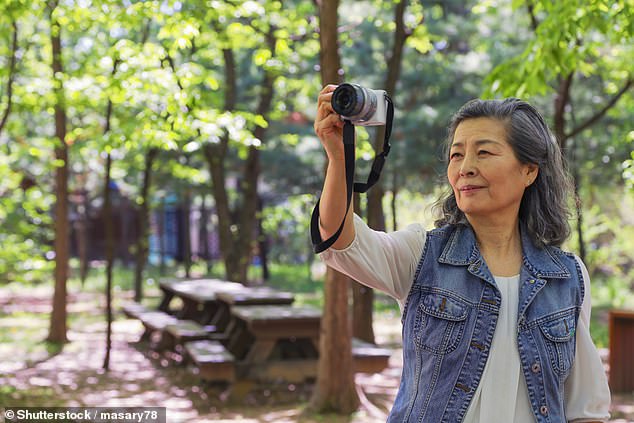 After less than two months, those in their 80s increased their cognitive abilities to levels similar to those seen in someone in their 50s (file photo)

‘Our multi-skill intervention may provide broad cognitive gains, akin to the benefits experienced earlier in the lifespan.’

Two years ago a report by the Global Council on Brain Health came up with similar results.

It found taking up tai chi, tackling foreign languages, socialising more and volunteering were among the best ways to keep the mind firing as the years advance.

Other examples included photography classes, investigating genealogy and physical activities like dancing or tennis. But ‘brain training’ with crosswords or sudoku puzzles actually had no noticeable benefit on thinking ability, said the researchers.

Dr Rosa Sancho, of Alzheimer’s Research UK, said at the time: ‘Mentally stimulating hobbies are thought to help our brains to be more resilient to the effects of the marching of time and may help to delay the onset of age-related conditions such as dementia.’

Despite decades of research, drugs can only treat the symptoms rather than the cause.

Consequently, there has been an increasing focus on ways to prevent the devastating neurological condition.