Lebanon is hit by ANOTHER explosion at ‘Hezbollah arms depot’

Lebanon was hit by yet another explosion today as a cloud of smoke erupted over a suspected Hezbollah arms depot.

Hezbollah operatives surrounded the blast site after a fire broke out in the village of Ain Qana, 30 miles south of Beirut which was devastated by last month’s port explosion.

Security sources said the explosion was caused by a ‘technical error’ and had caused a number of injuries but Hezbollah officials have not confirmed any casualties.

The Iran-backed group is heavily armed but its political wing has been a major player in Lebanese governments in recent years. 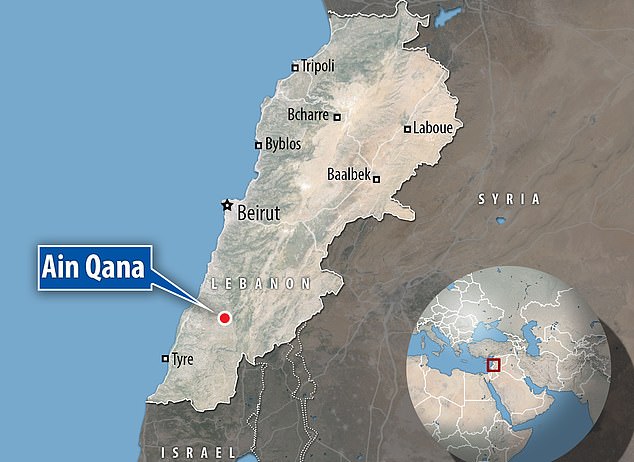 Hezbollah operatives surrounded the blast site after a fire broke out in the village of Ain Qana, 30 miles south of Beirut which was devastated by last month’s port explosion

A witness near the village said they felt the ground shake while footage on Lebanese TV showed men walking over scorched ground littered with debris.

Damage was shown in an adjacent house where the floor was covered in glass and what appeared to be a pool of blood, with a fire still burning at the blast site.

Hezbollah and Israel fought a month-long war in 2006, since when the Iran-backed group is thought to have amassed tens of thousands of rockets and missiles.

The Israeli military declined to comment on today’s blast.

Last week the US ramped up the pressure on Europe to ban Hezbollah altogether by claiming that the group had stores of explosives in Greece, Italy and Spain.

The alleged stash of weapons included supplies of ammonium nitrate, the chemical blame for the disaster in Beirut.

But France, which is leading reconstruction efforts in Lebanon, said there was ‘nothing tangible to confirm such an allegation’.

France is spearheading calls for reform after an explosion that was widely blamed on corruption and incompetence among Lebanon’s ruling class.

The government resigned in the wake of the disaster, which killed nearly 200 people, injured 6,500 others and destroyed huge swathes of the port city.

A stash of ammonium nitrate that had been lying unsecured in a warehouse was blamed for the explosion although it is still not clear what caused it to ignite.

The blast has plunged the country into its worst crisis since the end of the 1975-1990 civil war.

Beirut has since been hit by further fires, including one which damaged a landmark shopping centre designed by British-Iraqi architect Zaha Hadid. 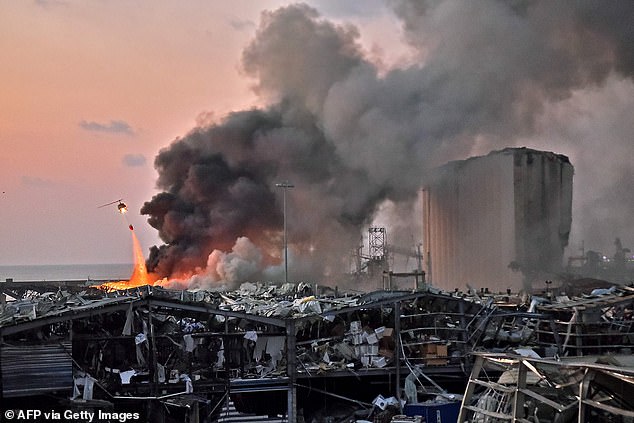 Today’s explosion comes weeks after the disaster in Beirut on August 4 (pictured), when a stash of ammonium nitrate exploded and devastated huge swathes of the Lebanese capital