James added nine assists and six rebounds before watching and cheering from the bench in the fourth while the Cavs rolled to an easy win with their healthiest roster in weeks. Forwards Tristan Thompson, Larry Nance Jr. and Rodney Hood all returned from injuries, good news as Cleveland gears up for the playoffs.

Phoenix was without its top two scorers, Devin Booker (right hand sprain) and T.J. Warren (left knee inflammation). But even they might not have been able to stop the Suns from losing for the 25th time in 27 games.

Cleveland Cavaliers’ Kevin Love, left, and Phoenix Suns’ Marquese Chriss reach for a rebound in the first half of an NBA basketball game Friday, March 23, 2018, in Cleveland. (AP Photo/Tony Dejak)

Seemingly disinterested early on, the Cavs found themselves trailing 30-23 after one quarter. But after missing their first seven 3-pointers, the Cavs found their range and knocked down four long shots in a row – including a 28-footer by Love – and went on a 32-7 run.

The Cavs outscored the Suns 39-18 in the second quarter, pushed their lead to 30 in the third and coasted to their seventh straight win over Phoenix.

Although Nance Jr. was back, Cavs acting coach Larry Drew, sitting in while Tyronn Lue is away dealing with health issues, stuck with his same starting lineup. That could change in the days ahead as Cleveland tinkers with a team that has only been at full strength for one game all season.

Nance Jr. finished with 15 points and 10rebounds in 22 minutes. Hood had nine points in 21 minutes and Thompson nine rebounds in 16 minutes.

James religiously takes naps as part of his pregame routine. His plan for Friday was to wake up while his alma mater, St. Vincent-St. Mary, was playing in a state semifinal game. He got up earlier than expected.

The Fighting Irish advanced with a win over Lexington. James joked that when he’s getting ready to sleep, nothing stops him.

“It’s really only my kids who can cut into my nap time, my wife as well, my mom if something is really needed,” he said. “They know once I go into that bedroom, it’s really zero dark thirty. Leave me alone.”

Suns: Booker, who has missed three straight games, tested his hand during pregame warmups before deciding not to play. The issue is more with him catching the ball than shooting. … Warren has missed two games in a row and is unlikely to play Saturday. He’s averaging 19.6 points. …. Veteran C Tyson Chandler has been limited to 46 games because of injuries and will be used sparingly over the final two weeks. “We talked about his overall health more than anything,” interim head coach Jay Triano said. “He still practices, but he’s obviously he’s not 100 percent so it doesn’t make sense to play him.”

Cavaliers: James has scored at least 10 points in 863 straight games, three shy of tying Michael Jordan’s NBA record. James is in line to tie the mark on Wednesday in Charlotte, potentially with Jordan in attendance. … F Jeff Green left with an illness after playing seven minutes in the first quarter and didn’t return. … Drew doesn’t know if Lue will join the team on its upcoming trip to Brooklyn, Miami and Charlotte. Drew visited Lue at his home on Thursday and the two discussed how to integrate the players returning from injuries. … F Kyle Korver won’t return until next week. He’s been away with his family following the death of his younger brother, Kirk.

Suns: At Orlando on Saturday.

Cavaliers: At Brooklyn on Sunday. 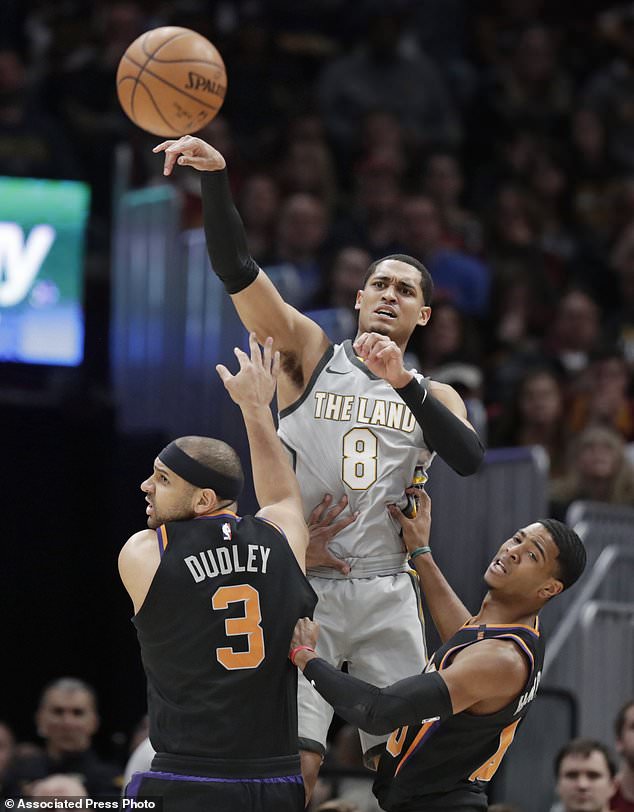 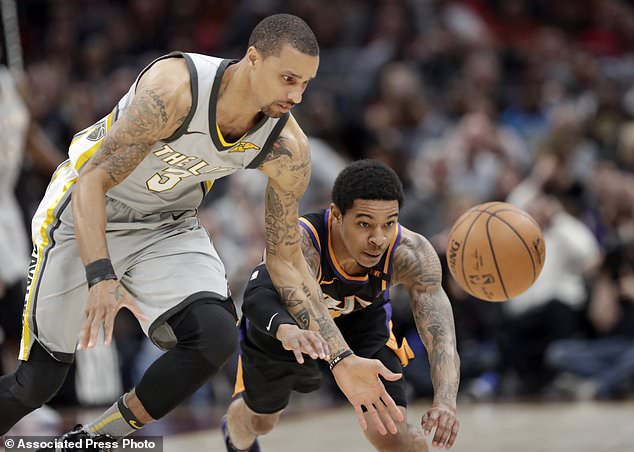 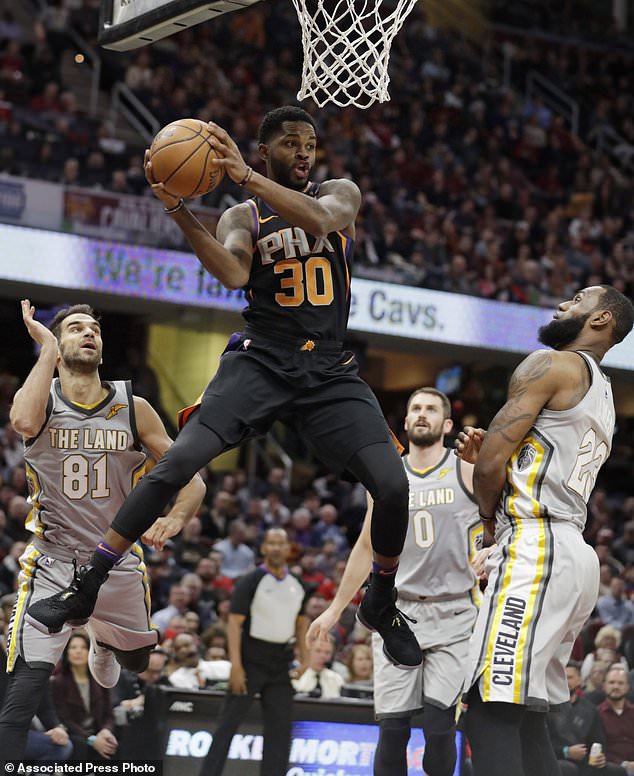 Phoenix Suns’ Troy Daniels (30) looks to pass against Cleveland Cavaliers’ Jose Calderon (81), from Spain, and LeBron James (23) during the first half of an NBA basketball game Friday, March 23, 2018, in Cleveland. (AP Photo/Tony Dejak) 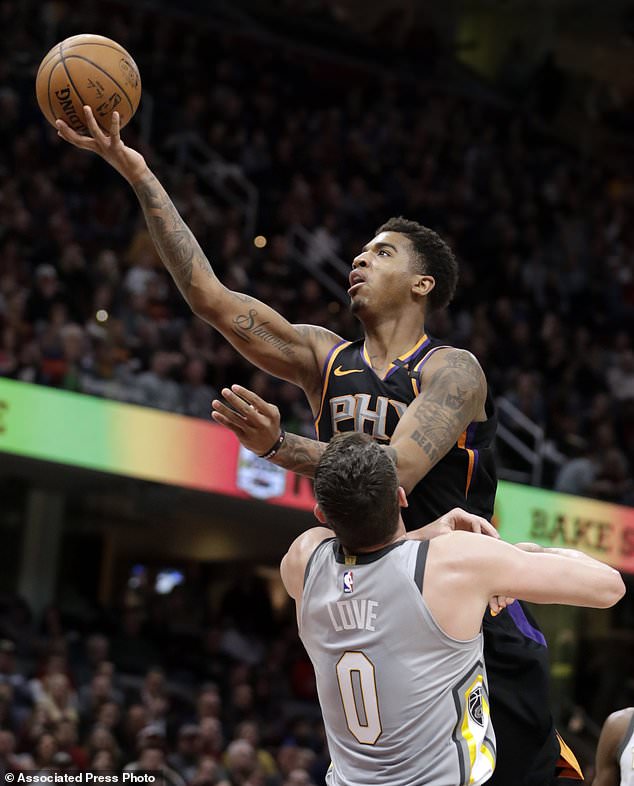 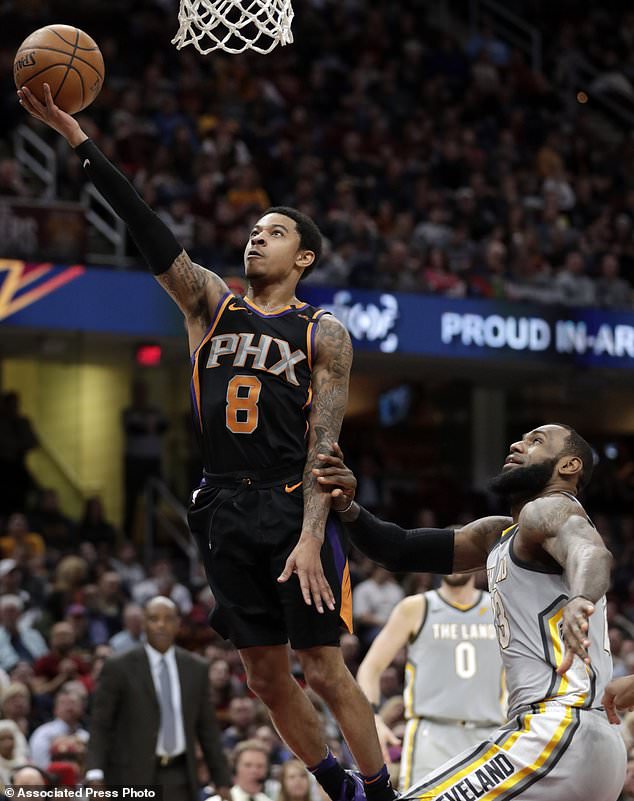 Phoenix Suns’ Tyler Ulis (8) drives to the basket against Cleveland Cavaliers’ LeBron James (23) during the first half of an NBA basketball game Friday, March 23, 2018, in Cleveland. (AP Photo/Tony Dejak)