LeBron James has a favorite for the MVP award – himself

LeBron James has someone in mind for the MVP award this season: himself.

This is a season where prohibitive MVP favorite James Harden has done phenomenal things with NBA-leading Houston, where reigning MVP Russell Westbrook has been fantastic again for Oklahoma City, and where Anthony Davis has found a new stratosphere to take his game, especially after New Orleans lost DeMarcus Cousins.

James raves about them all. But …

‘I would vote for me,’ James told The Associated Press. ‘The body of work, how I’m doing it, what’s been happening with our team all year long, how we’ve got so many injuries and things of that nature, guys in and out, to be able to still keep this thing afloat, I definitely would vote me.’

LeBron James currently ranks third in both points (27.4) and assists (9.1) per game in the NBA

It’s not an unreasonable take.

They are MVP-worthy, without question.

‘He’s continued to prove everybody wrong and find new levels,’ said Miami guard Dwyane Wade, James’ longtime friend and two-time former teammate. ‘In his 15th season, to be 33 years of age and to be playing the way he’s playing, as consistent as he’s playing, that is as impressive as anything that anybody has ever done.’

Oscar Robertson had numbers like those five times, in five consecutive seasons from 1960-61 through 1964-65 (he won his lone MVP award in the 1963-64 season). No one posted averages like that again until last year, when Harden and Westbrook both pulled it off. 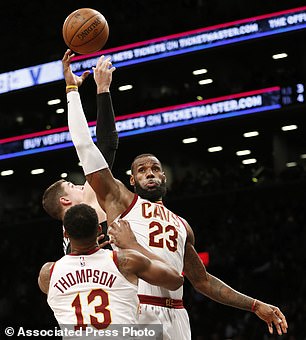 LeBron James tips the ball away from Brooklyn Nets forward Joe Harris and to teammate Tristan Thompson (No. 13)

Robertson, Harden and Westbrook were all twentysomethings when they had those numbers.

James is in position to join them, at 33. A fifth MVP wouldn’t define him. He’s long been a Hall of Fame lock, but believes this one would be earned.

‘At this point in my career, I’m just trying to break the mold, break the narrative of guys in their 15th year. … I’m trying to do things that have never been done before,’ James said. ‘It’s crazy because I’m not setting out to do it. It’s just kind of happening organically. I’m just training my body and training my mind and going out and playing and seeing what happens.’

The Cavaliers are in the mix to finish as high as No. 3 in the Eastern Conference, despite having 21 different players on the roster, 24 different starting lineups and counting, a slew of injuries, even with head coach Tyronn Lue falling ill and missing games.

The season has been rocky. James says he’s been at his best anyway.

‘I’ve said it,’ James said. ‘Obviously, I’ve had some unbelievable seasons before, but I’ve said it: This is the best I can go, just from a complete basketball player standpoint.’ 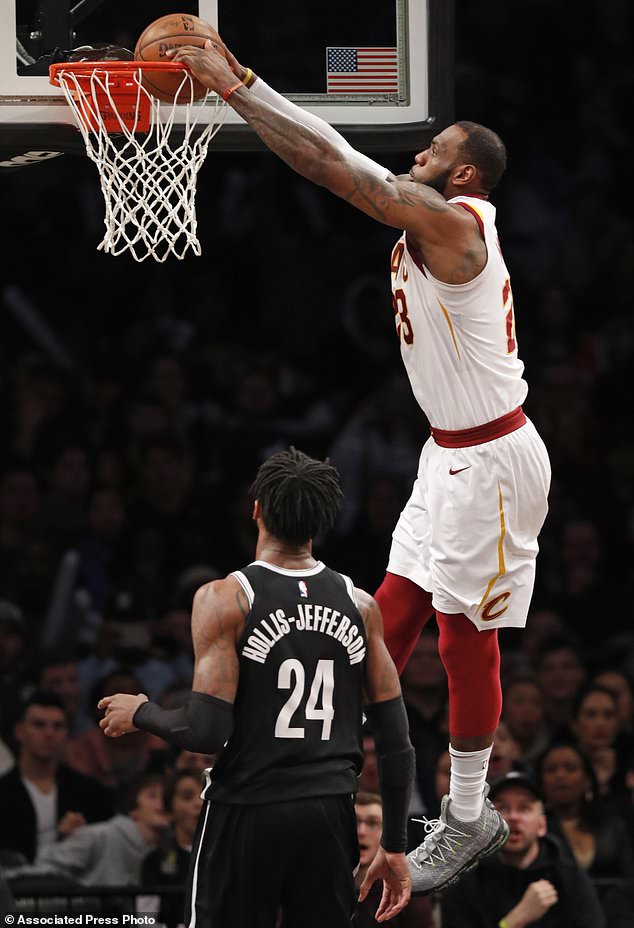