LeBron James plays a high-stakes basketball game in the trailer for Space Jam: A New Legacy

The official trailer for the upcoming film Space Jam: A New Legacy was released on Warner Bros Pictures’ YouTube channel on Saturday.

The feature, which stars LeBron James, is centered around a high-stakes inter-dimensional basketball game that the athlete must play alongside the Looney Tunes characters to win his son back from an evil computer algorithm.

The sports comedy film was helmed by Welcome Home Roscoe Jenkins director Malcolm D. Lee and will serve as a sequel to the 1996 movie Space Jam.

The trailer begins with the 36-year-old Lakers member trying to convince his son Dom, played by Cedric Joe, to attend basketball camp, which the teenager does not seem to be interested in.

During a tense conversation in an elevator, the athlete’s youngest son admonishes his father for his high expectations, remarking, ‘You never let me do what I want to do. You never let me just do me.’

Dom leaves his father and gets lost in a large server room, after which James attempts to search for his son and humorously notes, ‘Bet Will Smith ain’t got to deal with this.’

After his son is taken by an unseen force, the 36-year-old approaches a large sphere that engulfs him in a flash of light and transports him through a multiverse of various media franchises, including Game Of Thrones and The Wizard Of Oz. 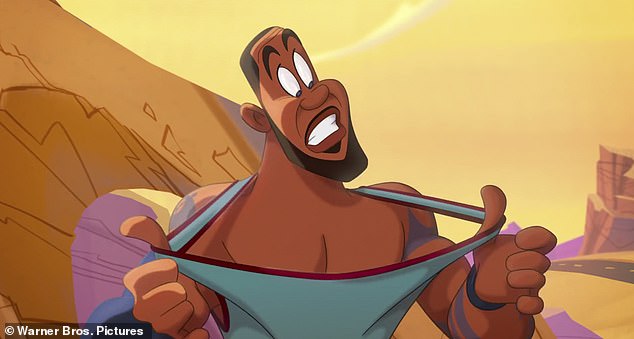 Plotline: The upcoming film is centered on the Lakers star, who must play a high-stakes basketball game in order to win his son back from an evil algorithm 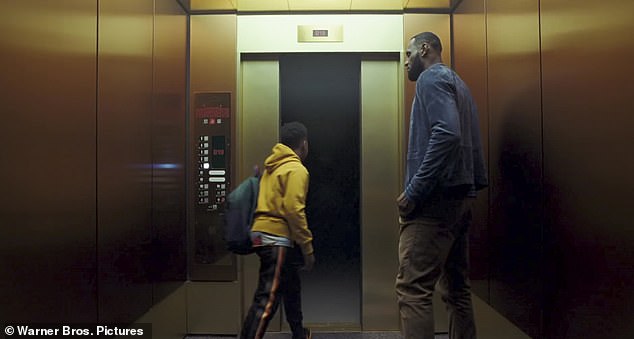 Family tension: The trailer begins with James coming into conflict with his youngest son Dom, who does not want to follow in his father’s footsteps as an athlete 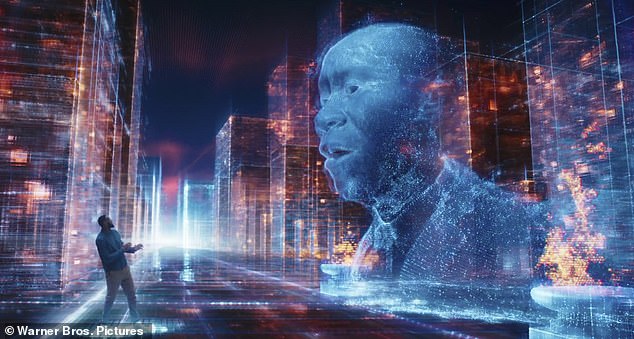 Dealing with it: The two are transported into a digital dimension, where a computer program portrayed by Don Cheadle informs the Olympian that he must play a basketball game if he wants his son back

The Olympian is then brought face to face with Al-G Rhythm, portrayed by Don Cheadle, who informs him that he has been brought to the Serververse and that he will have to play a game of basketball in order to win his son back.

The malevolent program instructs his assistant to send James to the Looney Tunes world, where he reacts with surprise upon turning into a cartoon and meeting Bugs Bunny, who delivers his iconic line, ‘Eh, what’s up, doc?’

The pair then begin assembling a team to take on Al-G Rhythm’s picks, and although the athlete attempts to gain players such as King Kong and Gandalf, the animated rabbit begins to look into recruiting other Looney Tunes characters. 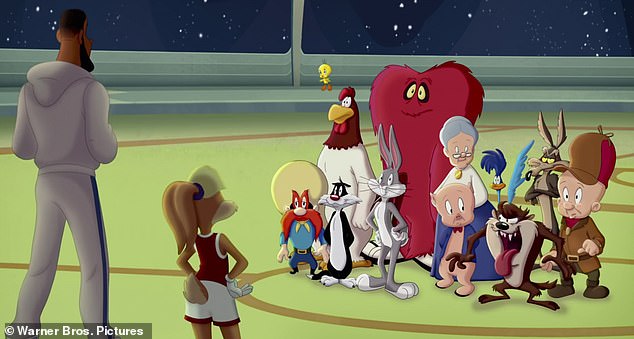 Bringing them together: James is then sent to the Looney Tunes universe, where he comes into contact with several of the classic characters 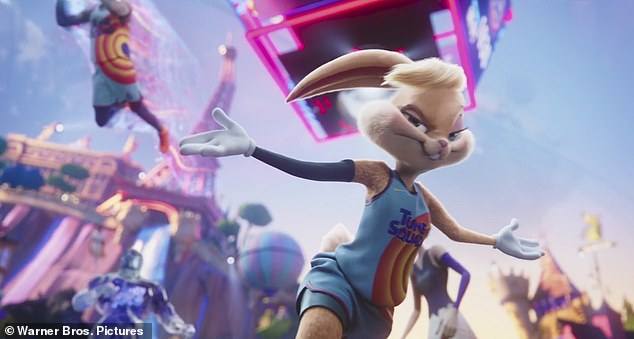 Stacked team: The athlete then begins looking for characters such as Superman and Gandalf to assist him in his efforts 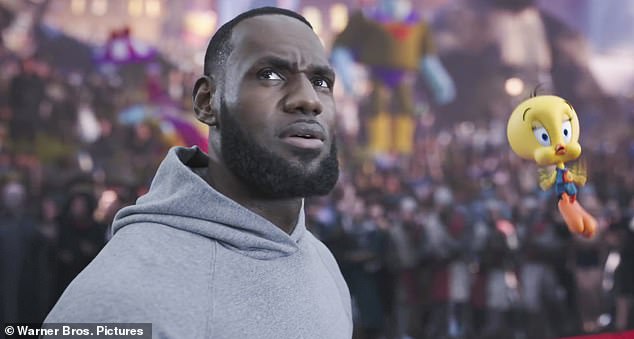 Using what he has: The basketball star eventually settles for working with all of the Looney Tunes characters for the high-stakes match

When the squad is brought together for the first time, Daffy Duck encourages Yosemite Sam to ‘shoot the ball,’ to which the prospector responds with gunfire, leaving the avian fan-favorite riddled with bullet holes.

After James is shown returning to his human form and Bugs is seen being morphed into a 3D version of himself, an assortment of characters, including The Flintstones and the Iron Giant, are seen arriving at the sporting event.

The Looney Tunes team is then introduced to The Goon Squad, a collection of physically imposing athletes with special powers; Daffy’s jaw literally hits the floor upon seeing Rhythm’s selections. 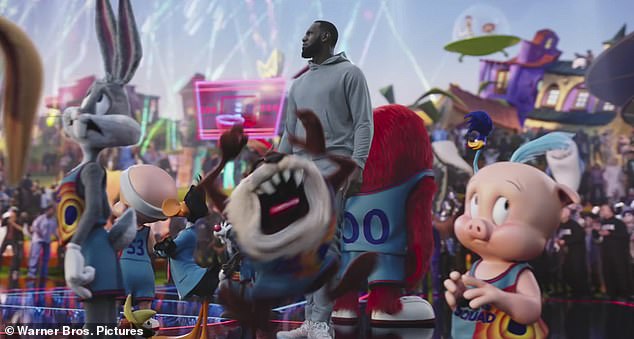 Wide variety: The inter-dimensional game was seen being attended by characters from multiple media franchises 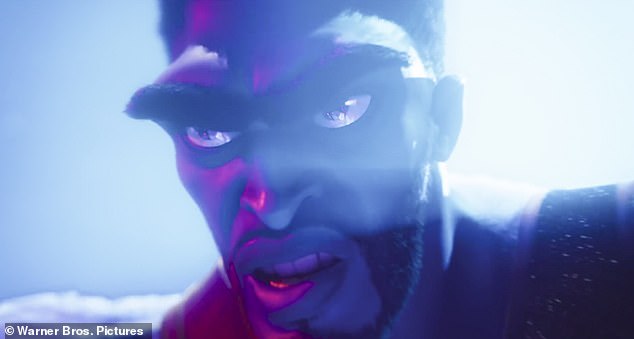 Formidable opponents: Al-G Rhythm introduces his version of the Goon Squad, who are comprised of several superpowered athletes 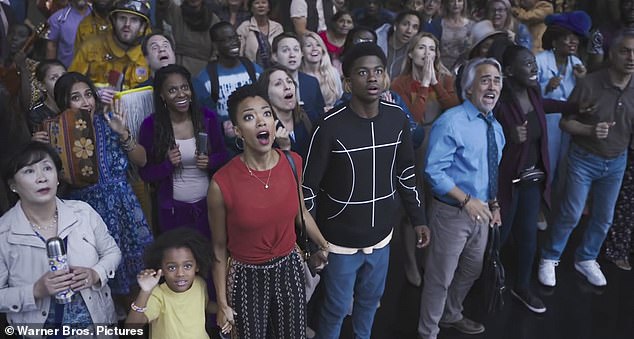 Priorities: During the match, James’ wife Kamiyah tells him that he needs to win the game to ‘get our son back’

The Lakers star has a short conversation with his wife Kamiyah, portrayed by Sonequa Martin-Green, who tells him, ‘you got to win this game and get our son back,’ as Dom pensively views his father from the sidelines.

James is then shown placing the audience in awe as he goes for a high-flying under-the-leg dunk before he hits a previously invisible wall and wakes up on the floor with little versions of Tweety Bird circling his head.

The trailer ends with Granny performing an acrobatic maneuver on her walker and sinking a three-pointer, leading the athlete to remark, ‘Whoa.’

Space Jam: A New Legacy is set to be released in theaters and on the HBO Max streaming service on June 16th. 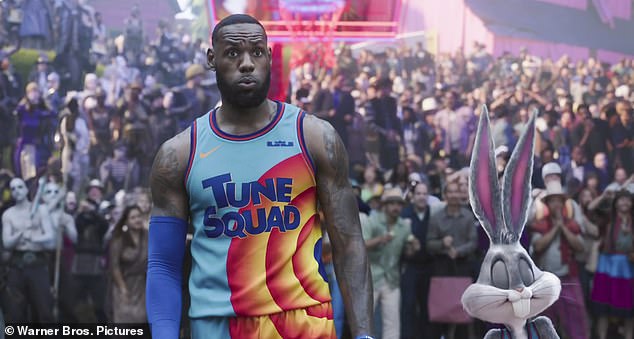 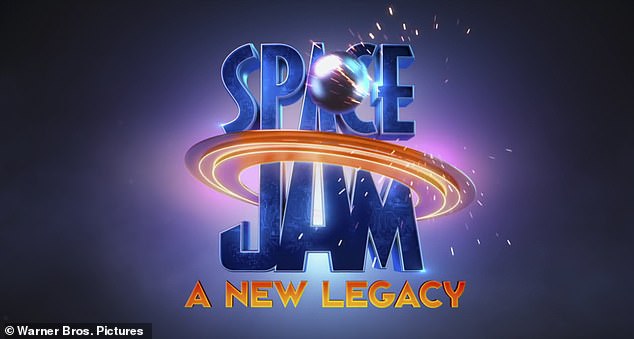 Coming soon: Space Jam: A New Legacy is set to make its debut on July 16th