Not even LeBron James’ biggest fan could believe his performance in the Cleveland Cavaliers’ game six win at home over the Boston Celtics, to keep their hopes of winning the NBA Eastern Conference Finals alive.

James’ son Bryce asked his dad, ‘How do you make all those crazy shots?’ as the two performed their personal handshake on the King’s walk back to the locker room following the final buzzer in Friday’s game with a final score of 109-99.

‘I just got it like that,’ James said, with a laugh, prompting his son to make a face at his father and walk off.

LeBron James and his son Bryce performed their personal handshake after the Cleveland Cavaliers beat the Boston Celtics on Friday, forcing a Game 7 in the Eastern Conference Finals

With Friday’s win, James effectively chose Boston as the place he’ll play next, with Sunday’s Game 7 at the Celtics’ home court putting talk of whether he’ll stay in Cleveland next season on hold for the immediate future.

King James’ focus was clearly all on his hometown team last night, doing his part to keep the Cavs alive despite losing All-Star Kevin Love with a head injury after colliding with Celtics’ Jayson Tatum.

Love and Tatum were away from the ball and didn’t see each other until it was too late. They banged heads and both immediately dropped to the floor with Love raising his left arm as if to signal he needed help. 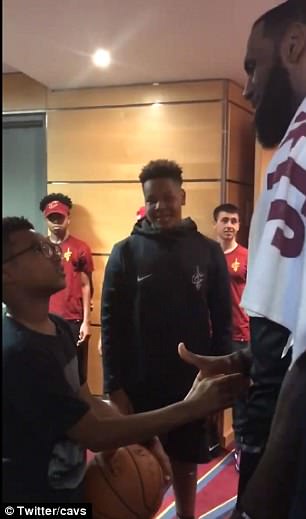 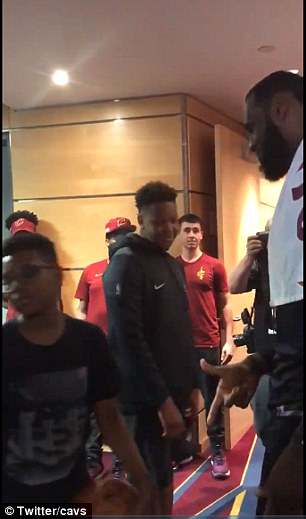 James’ son Bryce asked his dad, ‘How do you make all those crazy shots?’ as the two performed their handshake, to which James said, ‘I just got it like that,’ prompting sass from his son 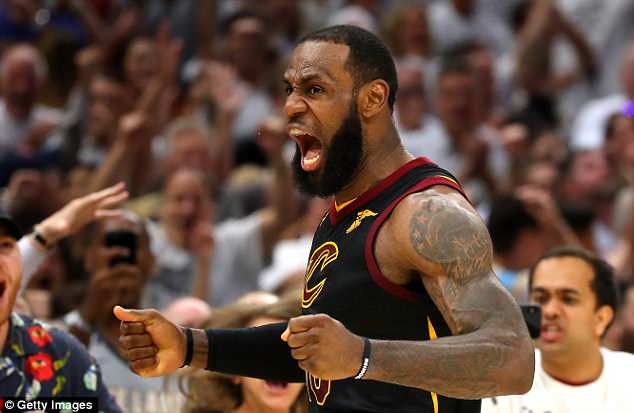 LeBron James of the Cleveland Cavaliers reacts after a basket in the fourth quarter against the Boston Celtics during Game Six of the 2018 NBA Eastern Conference Finals at Quicken Loans Arena on Friday in Cleveland, Ohio

As Love stayed down, the Cavs huddled around him. He was helped off and walked to the bench unsteadily before heading to the locker room for further treatment and evaluation.

Tatum stayed in following his nasty collision with Love. The rookie passed the concussion testing that he was given on the bench.

‘I didn’t see him coming, it was bad,’ Tatum said. ‘I wish the best for Kevin Love because he’s a great player and it’s been a long season.’

Love didn’t re-enter the game, and his status for Sunday is uncertain. 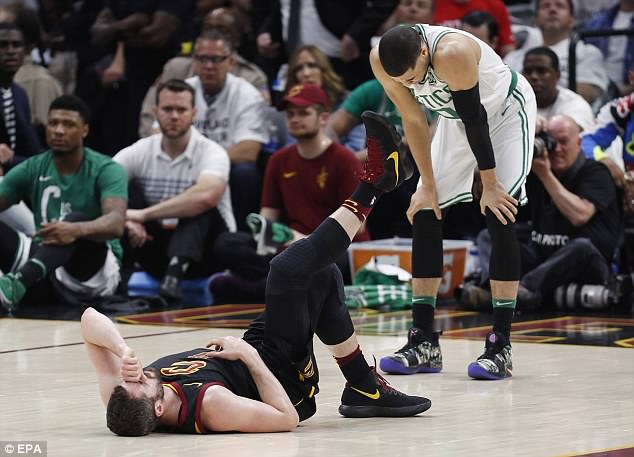 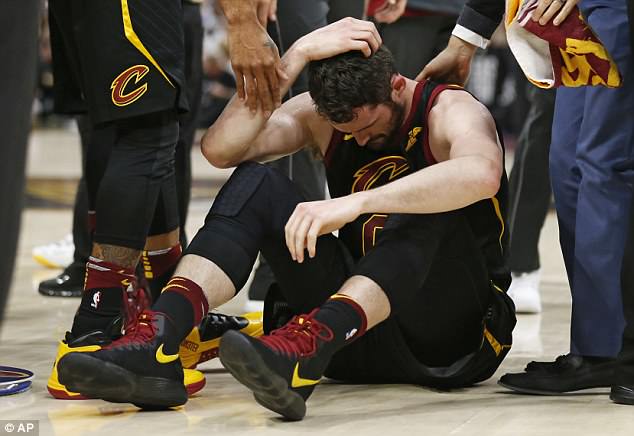 After he went out in the first quarter, Lue was forced to juggle his rotations and keep James on the floor longer than he wanted to. The three-time champion played the first 35 minutes without a break and then endured the final eight while nursing a right leg.

James didn’t know until after the game that teammate Larry Nance Jr had banged into him.

‘I felt some pain throughout my entire right side of my ankle into my leg,’ he said. ‘I was just hoping for the best, obviously, because I’ve seen so many different injuries, and watching basketball with that type of injury, someone fall into one’s leg standing straight up. Luckily, I was able to finish the game.’ 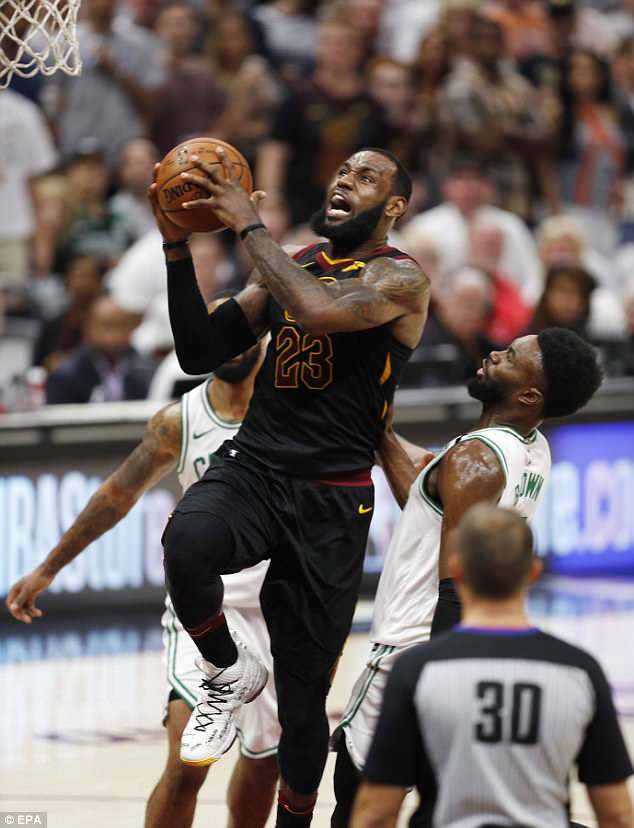 James (left) of the Cleveland Cavaliers goes to the basket against Jaylen Brown (right) of the Boston Celtics during the second half of game 6 of the Eastern Conference Finals at Quicken Loans Arena in Cleveland, Ohio on Friday

The team effort displayed by the Cavaliers has now forced a decisive climax to this back-and-forth series which has been punctuated by strong performances at home for both the Cavaliers and the Celtics.

James, himself, added 11 rebounds and nine assists while playing all but two minutes.

‘Greatness,’ Cavs coach Tyronn Lue said. ‘Championship pedigree. Giving it his all. We needed that, especially when Kevin went down. We had to play ‘Bron as many minutes as he had to. He delivered. He was up for the challenge. He carried us home as usual.’

This series, in which home court has meant everything, will have a fitting conclusion Sunday at TD Garden, where the Celtics are 10-0 this postseason. 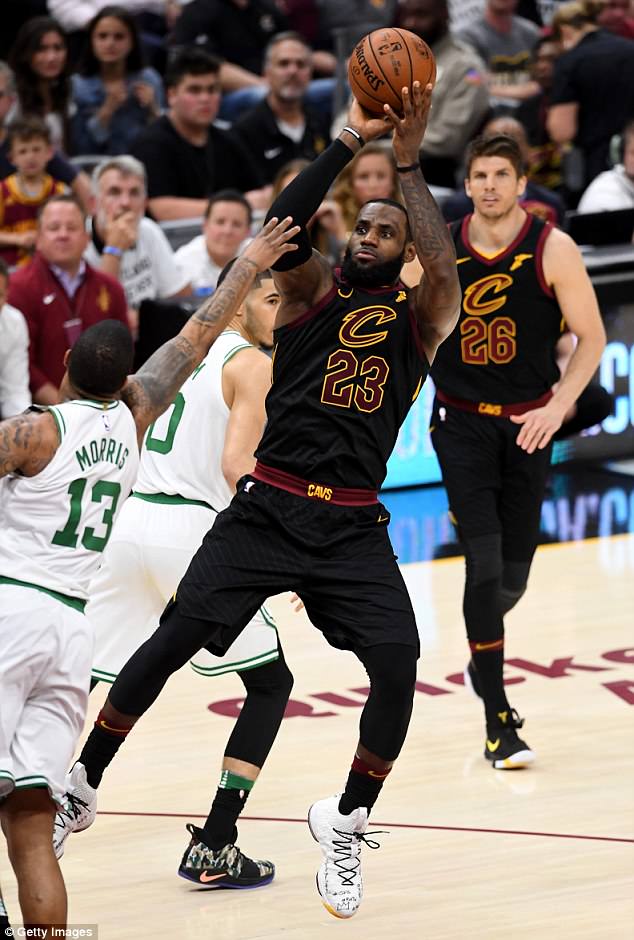 James #23 of the Cleveland Cavaliers shoots in the second half against Marcus Morris #13 of the Boston Celtics during Game Six of the 2018 NBA Eastern Conference Finals at Quicken Loans Arena on Friday in Cleveland, Ohio

‘It’s a Game 7,’ James said. ‘It’s something that you wish you had when you’re done playing, but more than that, it’s just basketball for me. I know what I’m capable of doing, and I’m going to trust everything I put into it.’

George Hill added 20 points, and Jeff Green put up 14 for the Cavs.

Terry Rozier led the Celtics, who are now 1-6 on the road, in scoring with 28 points, and Jaylen Brown had 27.

The Celtics were still within seven points of the Cavs in the final three minutes before James made consecutive three-pointers, celebrating the second by pounding his chest with both fists and screaming along with many of the 20,562 fans in the stands.

‘The love of the game,’ James said, in trying to explain his reaction to sinking that shot. ‘It’s a feeling you can’t explain.’

Just for good measure, he added a three-point play and then was taken out of the game to a rousing ovation and chants of ‘Cavs in 7!’ 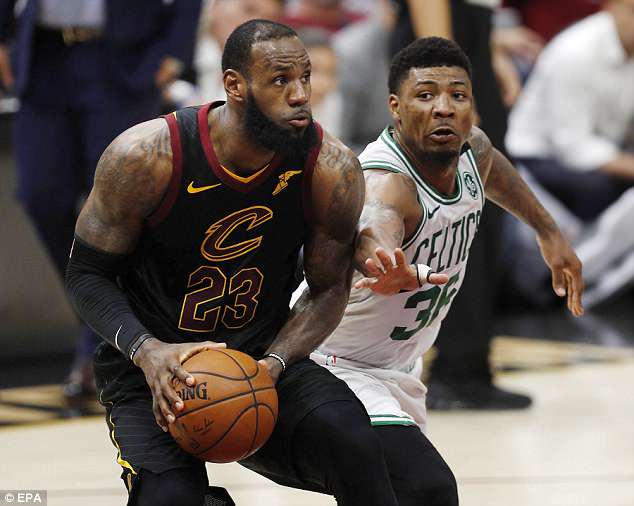 Brown (right) of the Boston Celtics defends against James (left) during the second half of game 6 of the Eastern Conference Finals at Quicken Loans Arena in Cleveland, Ohio

The win on Friday improved the Cavaliers record to 6-2 in elimination game since 2015. James has scored at least 40 points in five of those wins. James’ teams are 5-2 in Game 7s.

Friday night was the seventh 40-point game for James this postseason. Michael Jordan also had seven 40-point postseason games, one off from Jerry West’s record set in 1965.

The Celtics hold a perfect 37-0 record when it comes to winning after leading a series 2-0. After Friday’s loss, they dropped to 1-4 in Game 6s over the last four postseasons.

Coach Brad Stevens praised James for his consistency, and ability to exceed expectations. ‘Nobody else has what he has on his shoulders playing the game,’ he said. ‘I think that the way in which he’s done that and all of the years now that he’s made The Finals and gone deep into the playoffs, it’s unbelievable.’

Boston’s improbable run through the postseason this year without injured stars Kyrie Irving and Gordon Hayward will now take the Celtics back home, where they play with more intensity, togetherness and before fans hungry to see an 18th title banner raised to their arena’s rafters.

Smart most likely didn’t realize in the moment that he ended that statement with the Cavs’ team slogan for the 2018 NBA Playoffs, ‘Whatever it takes.’ 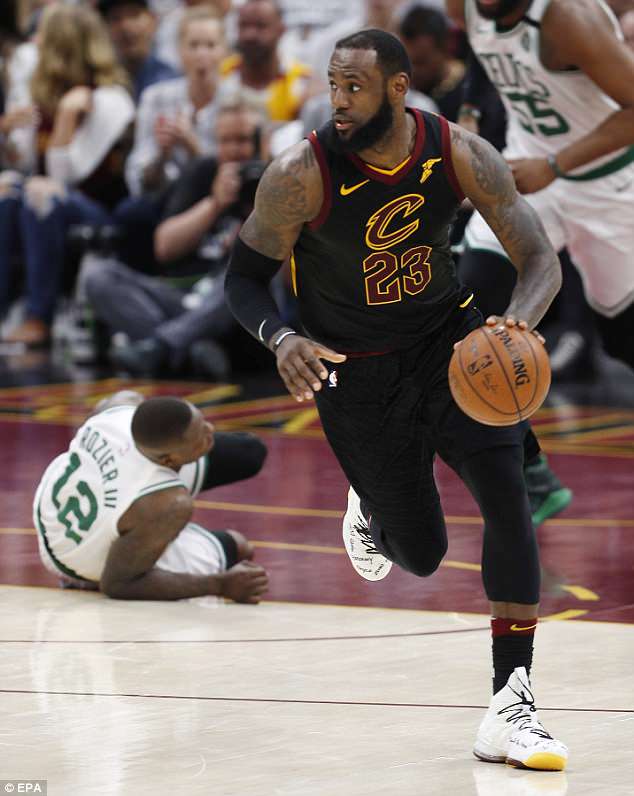 James grabs a loose ball against the Boston Celtics during the second half of game 6 of the Eastern Conference Finals at Quicken Loans Arena in Cleveland, Ohio on Friday

Hill, who came to Cleveland in a deadline trade, has been awed by what James has done in this postseason.

‘I’ve been in the league for some years and ran across him on the other side and really hated his guts,’ said Hill, who was on Indiana teams eliminated by James. ‘But to have him on our side, it kind of lets me take a deep breath of fresh air. It’s just something that you really can’t explain what he’s doing night in, night out. It’s just something special.’

‘I thought the best was when he always put us out,’ Hill added. ‘But to actually see it when he’s on your team, I can’t even put it into words.’

The real possibility that James was playing his last game in Cleveland hung over the game — and the city — in the hours leading to tip-off. Everyone had an opinion on what James will do next and that discussion filled the sports talk radio airwaves, bars and barber shops.

The 33-year-old has said several times since coming home in 2014 that he wants to retire with the Cavaliers, but fans are uneasy because he can opt out of his $35.6 million contract this summer and test free agency.

James has said he’ll sit down after the season ends to decide his next move. He’s already being courted by Philadelphia, Los Angeles and New York where fans can only dream of him joining their rosters.

For now, he’s only going to Boston. 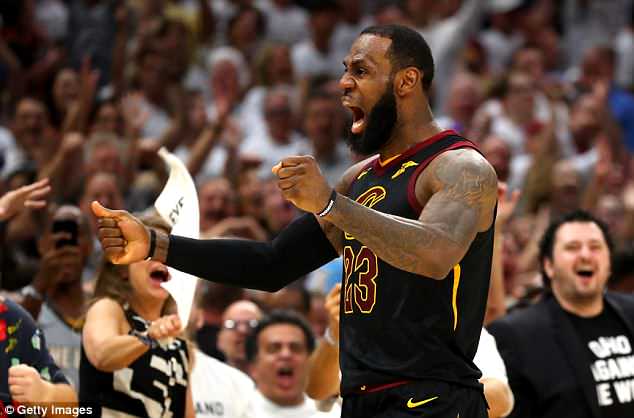