Leeds 0-2 Preston: Marcelo Bielsa suffers first defeat as his side are beaten by 10-man opponents

A first defeat for Marcelo Bielsa and, perhaps more strikingly, no goals. Ten-man Preston showed the Championship how they might deal with Leeds United from now on.

Alex Neil’s side were a man light for over an hour but their goalkeeper, Chris Maxwell, barely had a shot to save. Quite something against a team who had scored 16 in Bielsa’s opening six whirlwind matches in charge. 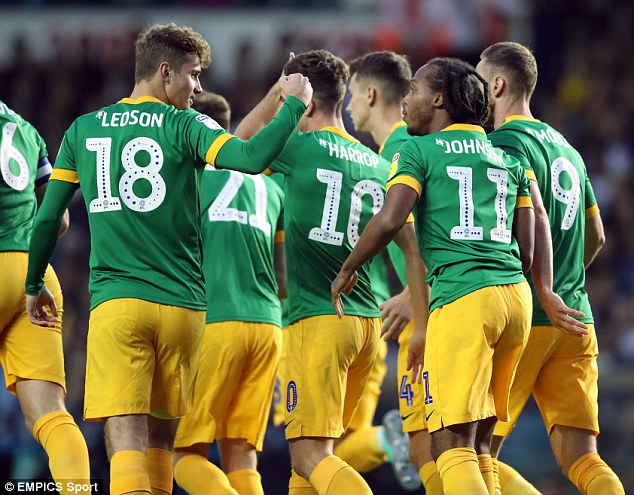 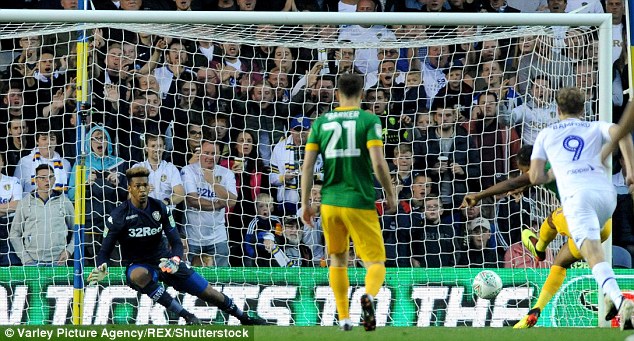 Leeds goalkeeper Jamal Blackman, on loan from Chelsea, was unable to keep out the penalty

‘Painful,’ was Bielsa’s summation. ‘We should not have lost. Usually when we have three chances we score one. Today we had 12 and we didn’t score any. The efficiency was not good.’

That is not to do Preston down. They were magnificent, Brandon Barker scoring a mesmerising solo effort just before half-time.

‘I’ve seen Leeds live twice and they’ve been blowing teams away,’ Neil said. ‘This result speaks volumes. We felt having watched them we knew how to play against them.’ 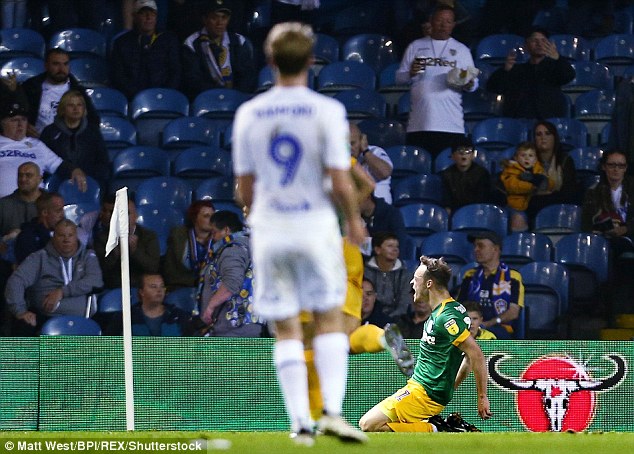 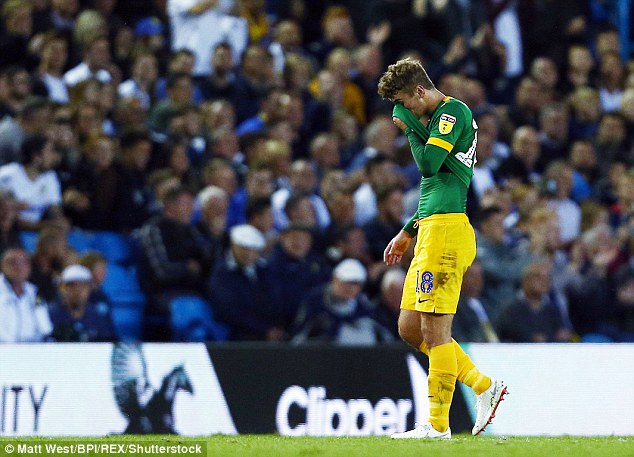 And they were unashamedly physical occasionally. The force with which Leeds now play was undoubtedly a contributing factor to one of the worst challenges this season will offer.

Ledson saw the ball go loose. Lewis Baker was in the corner of his eye. He took both and in truth might have had Baker’s leg as well had it been planted differently.

The lunge was reckless, two-footed, and at one point Ledson flew a yard in the air horizontally. An abdominal tackle and a certain red card. 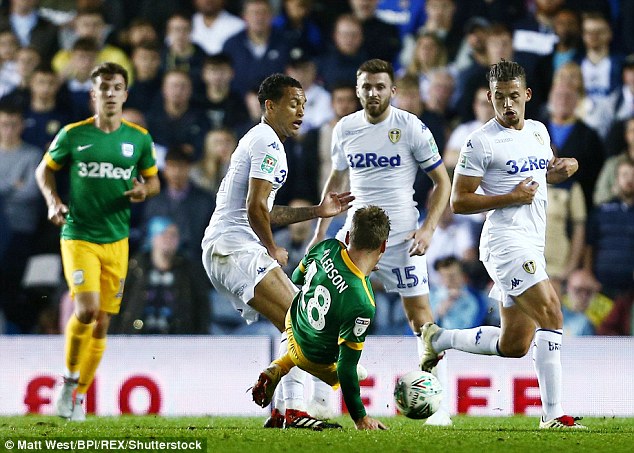 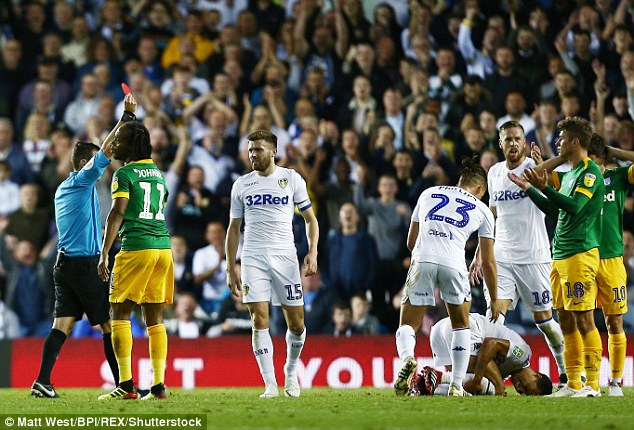 Bielsa’s Leeds make opponents operate at a different tempo, a different intensity than is the norm. They unnerve teams, their style forcing a haste. With that might come more gruesome tackles like this one.

Preston were a goal ahead by the time Ledson – a summer signing from Oxford United – smashed into Baker after half an hour.

The opener came within two minutes, Louis Moult tripped inside the box by Conor Shaughnessy after Leeds had failed to manoeuvre out from the back and Stuart Dallas gifted possession away. Johnson sent Jamal Blackman the wrong way from the resulting penalty.

‘We nicked the ball off them a few times in the opening minutes,’ Neil said. ‘Louis was very clever. He waited for contact. 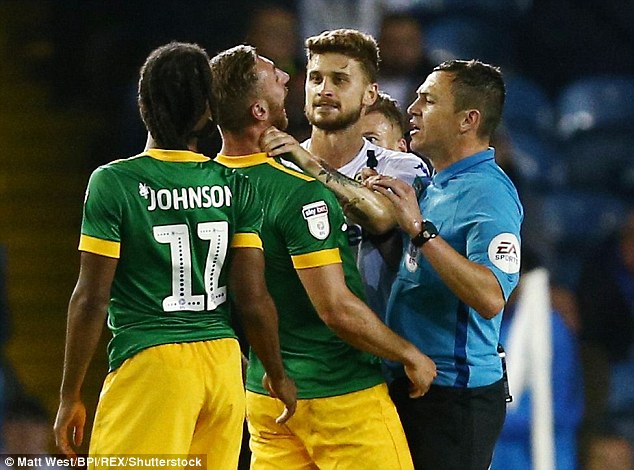 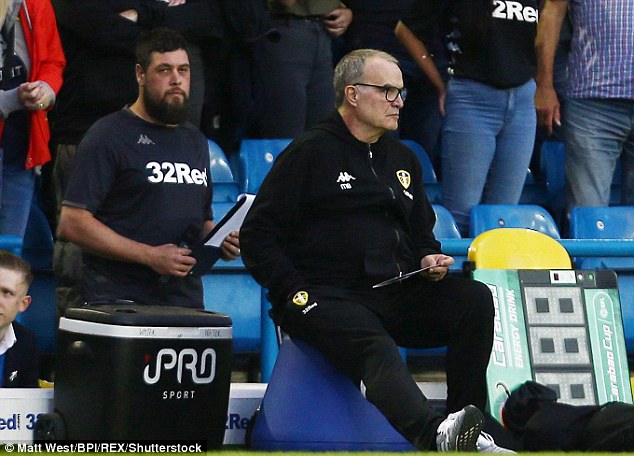 ‘Both teams wanted to press. If you took too many touches you’d lose the ball. We tried to press as much as we could after the sending off.’

The clincher came on the break. Barker, on loan from Manchester City, countered just inside the Preston half. He darted right, pushed the ball left and had Leeds defenders flailing, travelling 40 yards before superbly bending a left-footed shot away from Blackman.

Neil hopped on the touchline, realising that seeing this out would send a message of sorts, even with neither naming their strongest team.

Leeds had no answer. Bielsa was seen sarcastically applauding as Maxwell dawdled over goal kicks, Elland Road becoming increasingly exasperated by apparent time-wasting. Changes aplenty when Middlesbrough arrive here on Friday but Preston might have hit upon something. 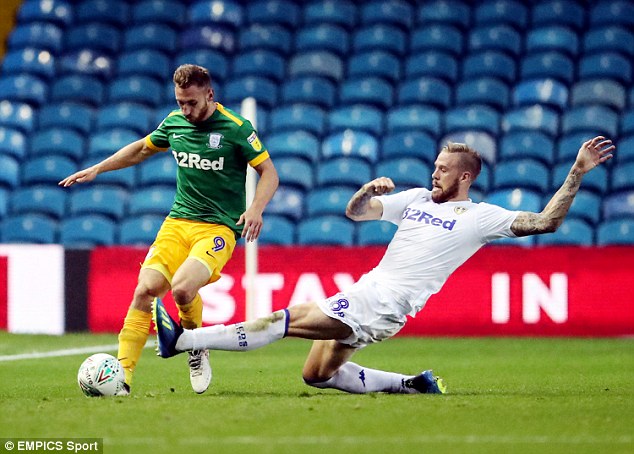