Leeds defender Ezgjan Alioski will not be punished by the Football Association for a gesture he made during last month’s Premier League win at Burnley.

Alioski reacted after going down under a second-half challenge by Dwight McNeil, who appeared to say something in the ear of the North Macedonia international.

The Leeds player responded to McNeil’s challenge and comments by covering his ears and sticking out his tongue before both benches got involved in an argument.

Alioski denied he had made any form of discriminatory gesture and said that he had mockingly imitated a ‘cry baby’ in response to having been referred to as one by an opposition player, the FA said.

An FA statement read: ‘Based on all the available evidence in the case, the FA is not satisfied that there is sufficient evidence to charge Alioski with a breach of FA rule E3.2 and he will face no further action.

‘The FA is satisfied that the complaint was made in good faith and there is no suggestion of this being an intentionally false or malicious allegation.

‘All complaints and allegations of discriminatory abuse are taken extremely seriously, and the FA encourages all participants who believe that they have been subject or witness to such conduct to report it through the appropriate channels.’

The FA said the Burnley player that the gesture was made towards did not see it at the time and the complaint had been made by a team-mate.

Witness statements were taken from all relevant players and officials, who were shown the video footage during the investigation. 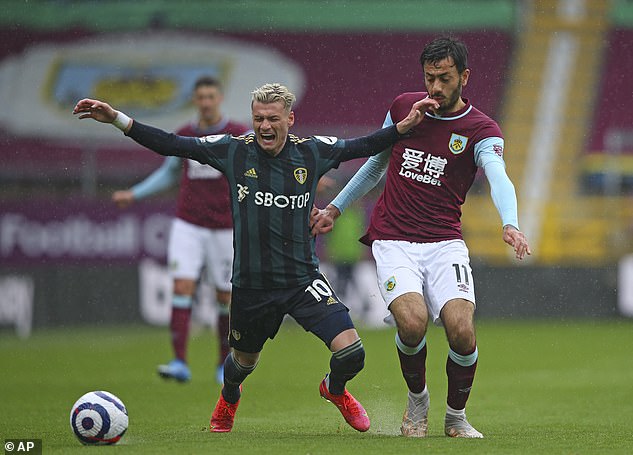 The FA added: ‘While the original complainant maintained that the gesture could be perceived as discriminatory, he stated that it could also be perceived as a childish schoolyard gesture.

‘No witnesses that were interviewed conclusively believed Alioski had made a discriminatory gesture.’