Cousteau, the first sea lord: The legacy of the pioneering Frenchman who opened a door to the deep is revealed in a new film

By Vicki Power For Weekend Magazine

Fifty years ago, French adventurer Jacques Cousteau introduced millions to the wonders of the ocean.

His TV series The Undersea World Of Jacques Cousteau, which ran on the BBC from 1968 to 1976, became a global sensation as it brought footage of fantastical marine life into our homes.

In trademark red cap and swimming trunks, Cousteau took audiences on breathtaking trips beneath the waves from the deck of his boat, Calypso.

Yet Cousteau, born in 1910, was so much more than a charming Gallic TV star. As a new film, Becoming Cousteau, reveals, not only did he invent scuba diving by co-creating the first underwater breathing apparatus, but he was decades ahead of his time in alerting the world to the importance of marine conservation.

‘This film is important because climate change and the environment are at the forefront of our discourse today,’ explains Mridu Chandra, the producer of Becoming Cousteau, which has just been released in cinemas. ‘And there’s so much to learn from Cousteau’s life and legacy. We wanted to revisit that because people are forgetting.’

But making Becoming Cousteau required a heck of a lot of effort on dry land. Its Emmy-winning director Liz Garbus and her team pored over 550 hours of footage and 100 hours of audio interviews, as well as searching through the Cousteau family’s archive of 8,500 film reels that span a century.

Fifty years ago, French adventurer Jacques Cousteau introduced millions to the wonders of the ocean. Pictured, Jacques filming underwater in 1984

Amazingly, Cousteau first dreamed of taking to the skies. But in 1935 a car crash derailed his naval pilot training. Recuperating by swimming in the Mediterranean, he became hooked on sea life and wanted to spend more time beneath the waves. ‘I am miserable out of the water,’ he said. ‘It is as though you’ve been introduced to heaven and then forced back to Earth.’

Back then, however, staying underwater was impossible. ‘People could free dive, holding their breath, but Cousteau wanted to go further,’ explains Mridu. ‘He found an engineer in his wife’s father’s company, who co-invented the aqualung with him, and that let them swim freely underwater.’

As a filmmaker, he wanted to show that to the world. ‘There were no underwater cameras, so he created a camera casing that would hold filmmaking equipment,’ says Mridu. ‘It was the first time people had seen any footage from beneath the waves.’

The film is timely, with the Cop26 climate change conference just finishing. Cousteau’s own efforts for the environment included convincing the French not to dump nuclear waste in the Med in 1960, and lobbying world leaders in 1986 to pass the moratorium on commercial whaling. 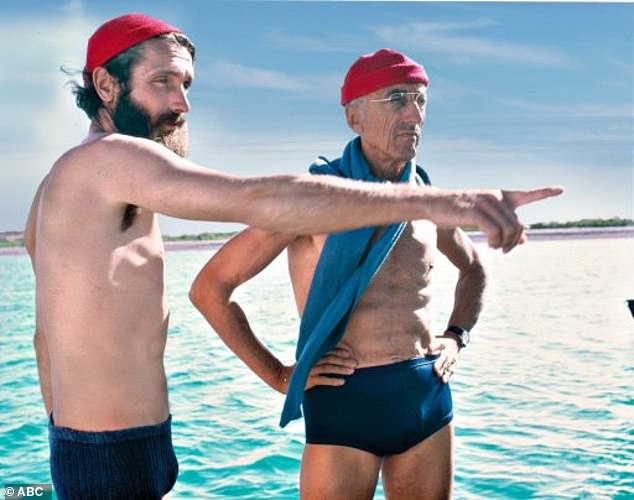 Jacques with his son Philippe in 1975. Cousteau died in 1997, aged 87, after introducing the world to the wonders of the sea and the need to conserve them

The film is awash with shots of his boat Calypso, a former Navy minesweeper. Footage of Cousteau joking on board with his tanned young crew brought 60s French glamour to his films.

His first wife Simone often sailed on the Calypso, as did their two sons – second son Philippe died in a plane crash in 1979. He had two more children with his second wife, Francine, all of whom promote his legacy.

And what a legacy it is. Cousteau died in 1997, aged 87, after introducing the world to the wonders of the sea and the need to conserve them. ‘The thing I would say about Cousteau is that everything about him stems from his passion,’ says Mridu. n

Becoming Cousteau is in cinemas now.