Under New York’s 1926 “cabaret law, all public spaces that sell food and drink must acquire near impossible-to-obtain permits to authorize dancing indoors

Dancing is technically illegal in thousands of bars, clubs and restaurants in the city that never sleeps, but New York campaigners are finally in sight of getting the law overturned.

The “cabaret law,” passed in 1926, requires public spaces that sell food and drink to acquire near impossible-to-obtain permits to authorize dancing indoors.

Those without the permit can be fined. Repeat infractions risk bar owners losing their license to sell alcohol, which could in turn lead to bankruptcy.

Yet fewer than 100 of New York’s more than 22,000 bars, restaurants and clubs have the elusive permit, which is granted after mountains of Kafkaesque paperwork and jumping through prohibitively expensive hoops that Brooklyn councilman Rafael Espinal says unfairly discriminate against small business owners.

“It’s just ridiculous,” says the indignant 27-year-old Democrat in his basement office. He wants to repeal the law, which could be put to a vote in the New York City Council as early as December.

“Let’s finally get this law off the books so that we can go after the real problem, whether it be noise, crime, unsafe conditions,” he snorted. “Let’s not go after dancing.”

Espinal and pressure groups such as the Dance Liberation Network say the law has been used historically to crack down on neighborhoods with large minority populations such as African Americans, Latinos and the LGBT (lesbian, gay, bisexual and transgender) community. 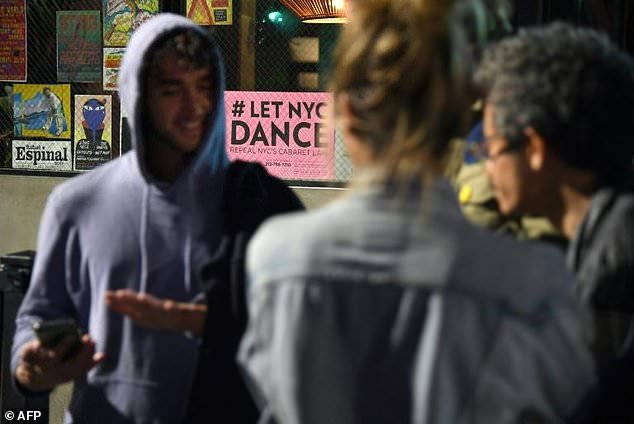 A sign urging the repeal of New York’s “cabaret” law, which has been used to target minority and LGBT communities in the city that never sleeps

Passed initially to assert control during the time of Prohibition, some historians say its true goal was the closure of Harlem jazz bars in the 1930s, ’40s and ’50s to stop whites and blacks mixing.

In the 1970s and ’80s, it was used to close establishments frequented by the LGBT community as it fought for its rights. In the 1990s, mayor Rudy Giuliani used the law to get tough on clubs in his fight against crime.

Today, it is little used, but detractors say it is invoked as an excuse to shut down premises considered undesirable.

One recent casualty was Andrew Muchmore, a lawyer who owns a bar that hosts live music in Williamsburg, Brooklyn’s hippest neighborhood.

One night in 2013 when a group of customers were making noise outside, an inspector fined Muchmore $200 under the cabaret law.

When he went to pay, the office couldn’t find the docket. But Muchmore went to court anyway, charging the law violated the “sacred” First Amendment of the US Constitution, which guarantees freedom of expression.

“I was bothered by the principle that such a law could exist in America and that offended my sensibility as an American,” Muchmore told AFP.

“I did not feel comfortable that that could exist in the 21st century in New York of all places,” he said.

Muchmore complains of a “broader cultural collapse” in New York, alleging that neighborhoods are “ghosts of their former selves” — railing against brutal rent hikes and bureaucracy that suffocates small entrepreneurs.

No longer a “wild, unruly and free place,” the city’s famed nightlife has taken a knocking, he says. It’s a frequent complaint that the onslaught of gentrification has pushed out artists and musicians in a city of millionaires and billionaires.

But the campaign to scrap the cabaret law has won the support of New York Mayor Bill de Blasio, who also acquiesced to another of Espinal’s demands — create a “nightlife mayor” also dubbed “director of nightlife” or DON.

The search is now on for a liaison officer between city hall, residents and New York’s multi-billion-dollar nightlife industry, in order to support a safe nightlife scene that supports 300,000 jobs and attracts tourists far and wide.

De Blasio signed the new position into law at House of YES, a Brooklyn party venue alongside Marky Ramone, the drummer of legendary punk band The Ramones.

“It’s pretty shocking — one in five small businesses have been lost in the last couple of decades in New York City,” the mayor said.

“One of the big reasons was it was hard to navigate the rules and restrictions that in so many cases went too far,” he added.

Muchmore is optimistic about ending the law. “If the city council has not already repealed the law by that time, the court will find the law to be unconstitutional,” he predicts.