Motorists living in more than 20 local authorities in England can park where they like with only a small risk of getting a ticket because of a legal loophole.

The areas don’t have Civil Parking Enforcement powers from the government, which means they don’t have council traffic wardens issuing on street tickets.

Instead, that role is down to the police force to issue penalty notices – but across many boroughs and districts their resources are diverted to catching criminals.

The problem has reached a peak in Suffolk, where six of the seven local councils don’t have CPE powers.

The problem has reached a peak in Suffolk, including in Newmarket, (above) where six of the seven local councils don’t have Civil Parking Enforcement powers. 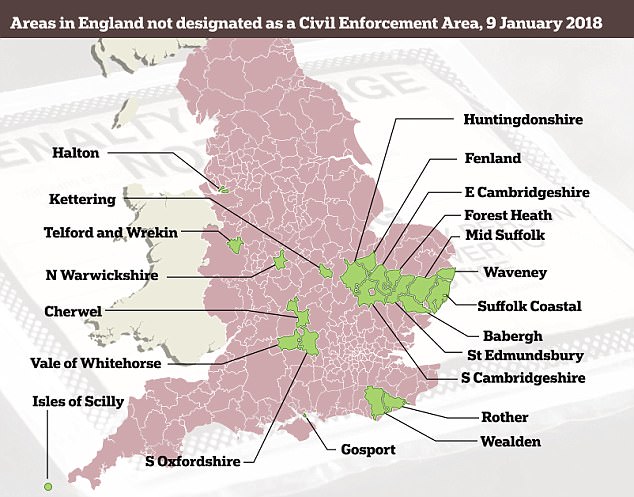 Many drivers have created huge traffic issues in towns and villages as they park up on double yellows or in restricted bays.

Out of 327 authorities in England just 21 have still not received CPE authority.

Suffolk is the county with the most, with six, followed by Cambridgeshire, four, and Oxfordshire, which has three. 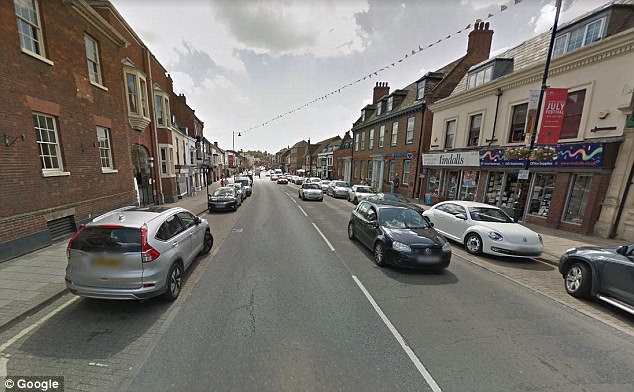 Another view of parking in Newmarket, Suffolk, where drivers have been parking on yellow lines

Suffolk County Council has been lobbying the Department for Transport to get CPE powers since January last year, but authorisation has still not been granted.

Suffolk Police and Crime Commissioner Tim Passmore, said: ‘Parking does come lower down the priority list for the constabulary.

‘There are other higher priorities like murder or people coming to harm.

What is Civil Parking Enforcement?

Civil Parking Enforcement is the name given to the transfer of powers from the Police to local authorities for enforcing parking contraventions.

It came in in 2004 through the Traffic Management Act and guidance was issued from the Department for Transport to councils on how it should be managed.

The Civil Enforcement Officers will then issue Penalty Charge Notices to any vehicles flouting the rules.

These can include parking on double yellow lines, parking in residents bays without a permit, or overstaying in time-limited bays.

‘The Department of Transport need to buck up and move this forward. I don’t see one reason for the delay.

‘As I understand it there’s only two pages of A4 that need to be signed, it’s not complicated legislation.’

Civil Parking Enforcement was introduced in 2004, and since then around 93% of councils in England have opted to take up the powers.

In 2005, Suffolk’s county town Ipswich started on-street CPE, but none of the other six borough councils followed suit.

During the last 14 years locals have only been at risk of council tickets in car parks and ‘resident only’ areas.

Locals have said it is just ‘safer’ to park on pavements or double yellow lines than in a car park without a ticket.

One resident, who lives in Newmarket, told the Daily Mirror: said: ‘Everyone just parks wherever they want whenever they want.

‘The police are understandably too busy and I’ve never received a ticket.’

Police figures show that in 2016/17 just 3,854 Penalty Charge Notices were issued in Suffolk, with all money going to the treasury.

Councillors say they they expect the numbers of motorists issued with tickets will rise to 1,000% to 36,000 when they finally take control.

Suffolk Police said officers will continue to enforce on-street parking until the council is given CPE powers.

The force said all the money collected is sent to HM Treasury.

A spokesman for the Department for Transport added: ‘We understand the importance of parking enforcement to local communities and are working closely with local authorities in Suffolk to minimise delays to their application.’