She is currently in Paris for Haute Couture Fashion Week – and singer Rita Ora stole the show at the Chanel show.

The 27-year-old really made her mark as she posed for photos wearing a light-coloured mini dress which cost €2,200 and had a hood attached and a plunging neckline.

She showed off her lean, golden legs in the ensemble which she wore with a pair of designer trainers outside the Grand Palais.

Featuring threads of silk, cotton and cashmere, the How We Do hitmaker teased a glimpse of her cleavage in her outfit.

She paired the look with a quilted peach bum bag from the label which matched the neon coral flashes on her footwear.

Accessorizing with a Chanel padlock necklace and strings of glass beads, Rita had something of a pared back look, with her blonde hair extensions removed.

The singer, 27, dressed head to toe in the designer, showcasing her incredible physique in a embroidered mini-dress

While Rita had been up until the early hours, you would never know. Her make-up was expertly applied with peach shimmery eyeshadow and matching lip gloss. She added a touch of sass with round lens sunglasses.

She hid her long blonde tresses under the hood of the dress and finished off the look with a chain Chanel padlock and several strands of glass beads.

Model Stella Tennant, 47, was also present and wore a black sequin dress over a blouse, with a monochrome scarf and Balenciaga sock boots. 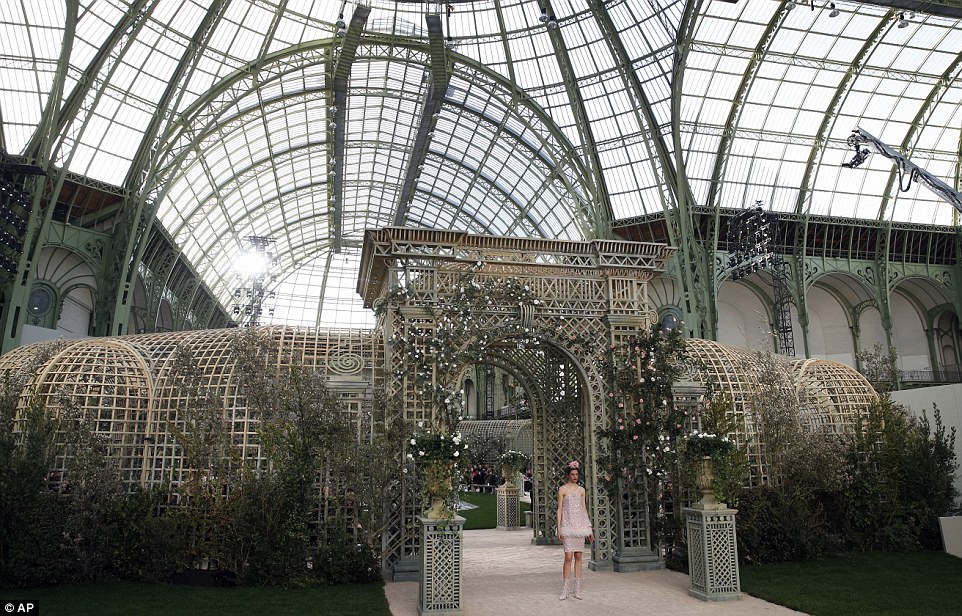 Stunning: The Grand Palais was artfully decked out with climbing florals as models showcased the latest designs 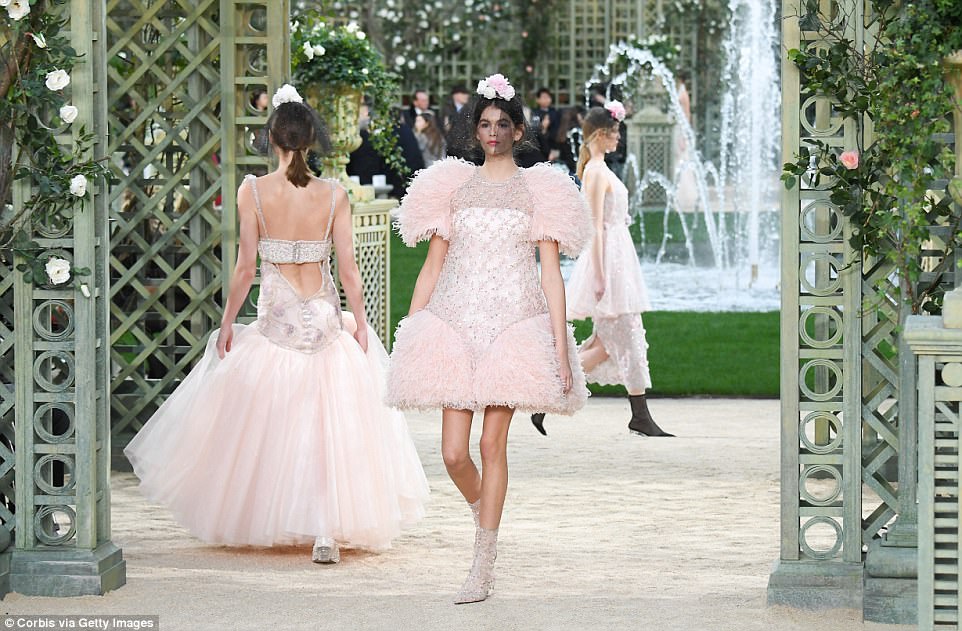 Ballerina pink: Model Kaia Gerber, daughter of Cindy Crawford, looked incredible in her extravagant creation with matching boots – a floral veil covered her face as she walked down the catwalk with ease 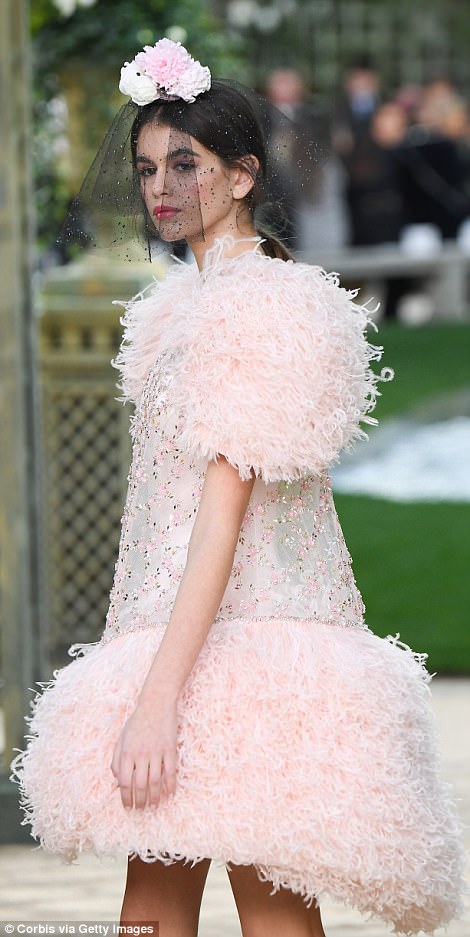 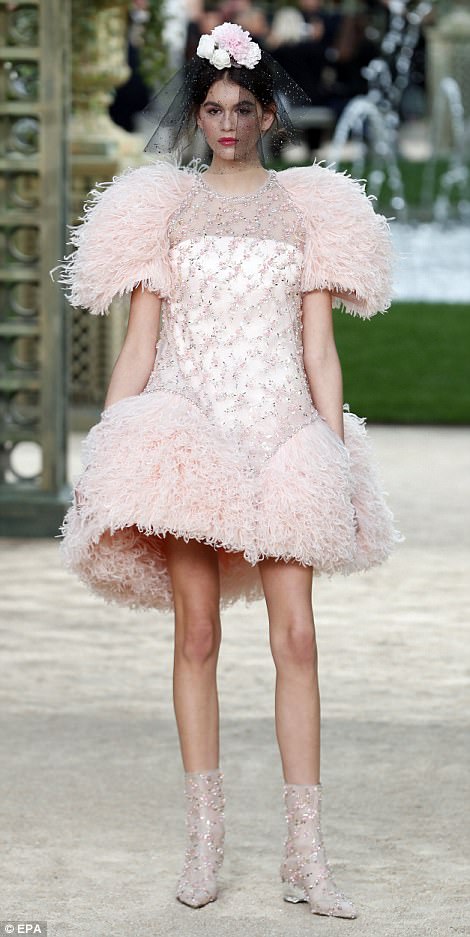 Whatever the feather: Kaia looked incredible from every angle as she worked her magic on the runway 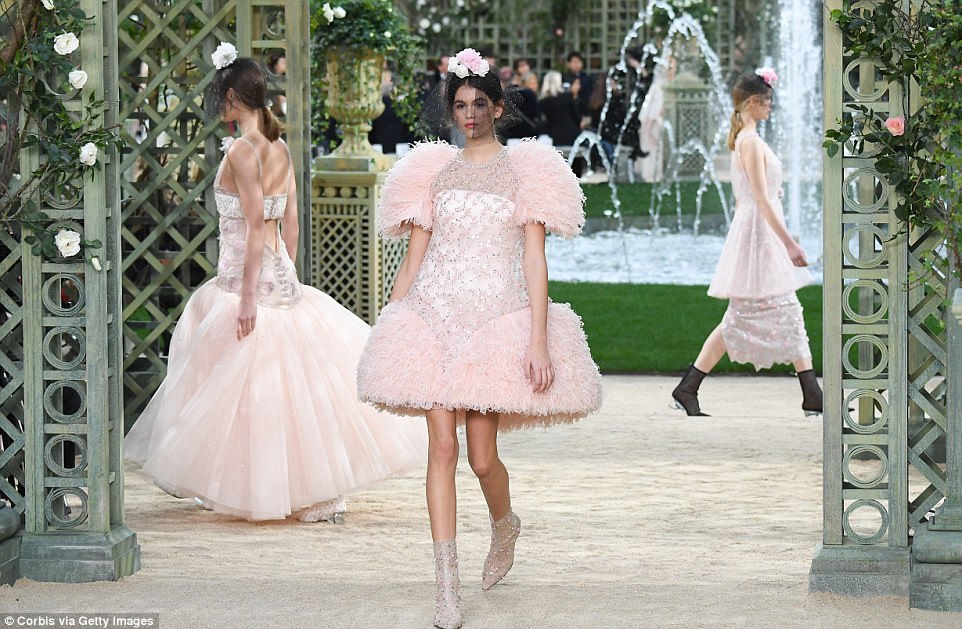 Summer garden: Kaia was surrounded by a series of model wearing different versions of her look which appeared to be bridal in style – no doubt there will be a waiting list for this beauties

All eyes were on Kaia Gerber, 16, during the show. The daughter of supermodel Cindy Crawford and Rande Gerber is one of Karl Lagerfeld’s fashion muses.

She effortlessly glided down the runway wearing a stunning light pink creation which consisted of oversized feathers and embellished fabrics.

The look was completed with a pair of matching boots which were delicate in design and covered in yet more crystals. Her headwear was made of a light veil with a floral design on top.

Rita appears to be enjoying some time off in Paris, after releasing her eagerly-awaited duet with One Direction heartthrob Liam Payne, 24, for upcoming movie Fifty Shades Freed.

Here comes the bride: This stunning white ensemble is the perfect look for spring/summer weddings 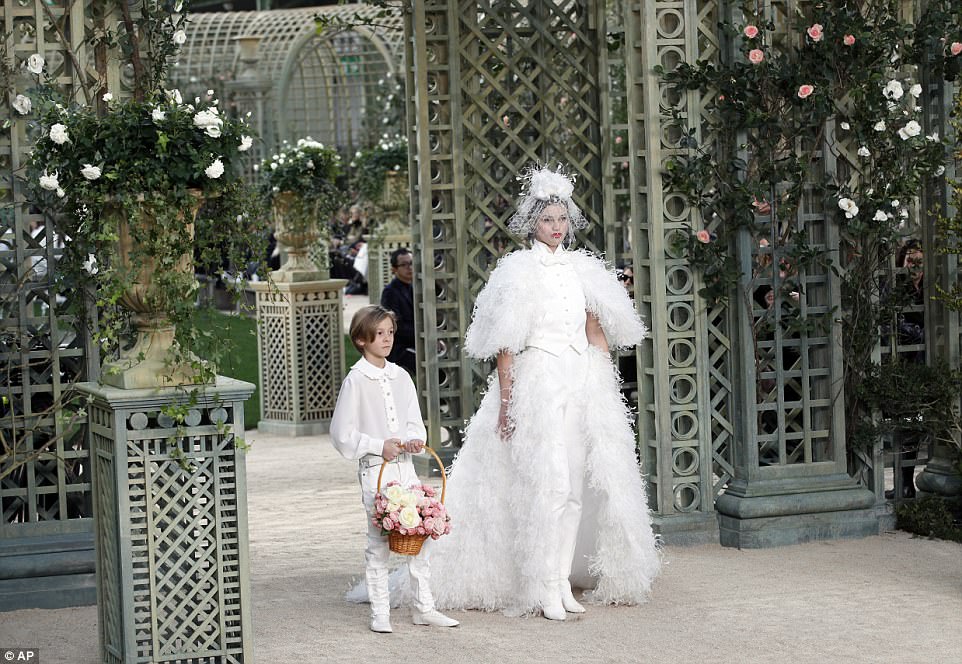 All white: A model wears a creation for the Chanel Haute Couture Spring-Summer 2018 fashion collection alongside a flower boy 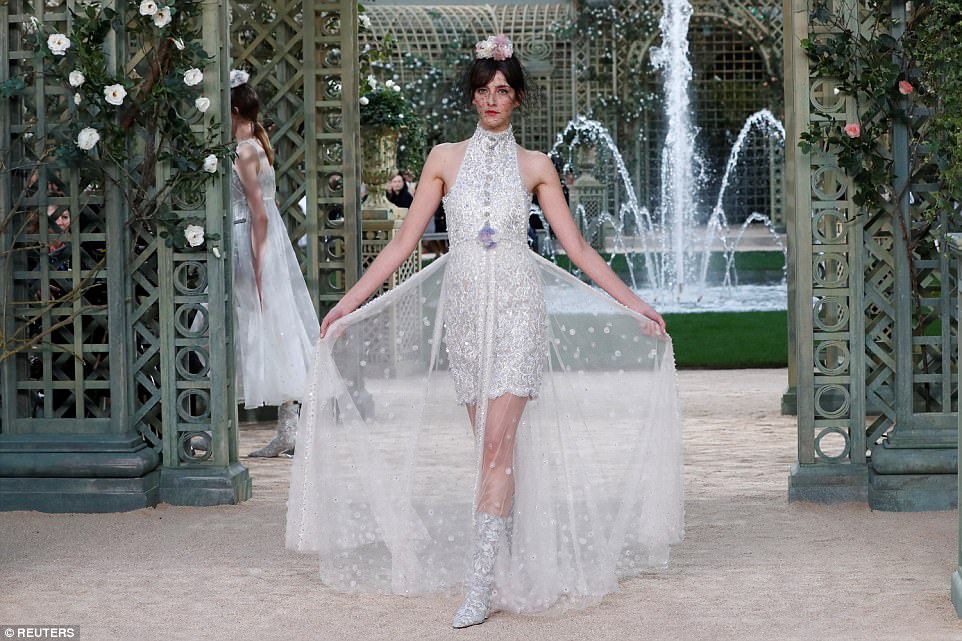 Out of this world: A sexy halter-neck design with a sheer train will no doubt be on many a bride’s wish list

Space age and disco: These glitzy numbers are the perfect party pieces or will also make for alternative bridesmaid’s attire

The single For You will feature on the soundtrack for the movie starring Jamie Dornan and Dakota Johnson, due for release next month, just in time for Valentine’s Day.

The track sees Liam and Rita follow in the footsteps of former One Direction star Zayn Malik and Taylor Swift who teamed up for I Don’t Want to Live Forever, the track from the most recent film Fifty Shades Darker.

On its release it shot straight to the top of the charts, bagging the number one spot in both the UK and the US. 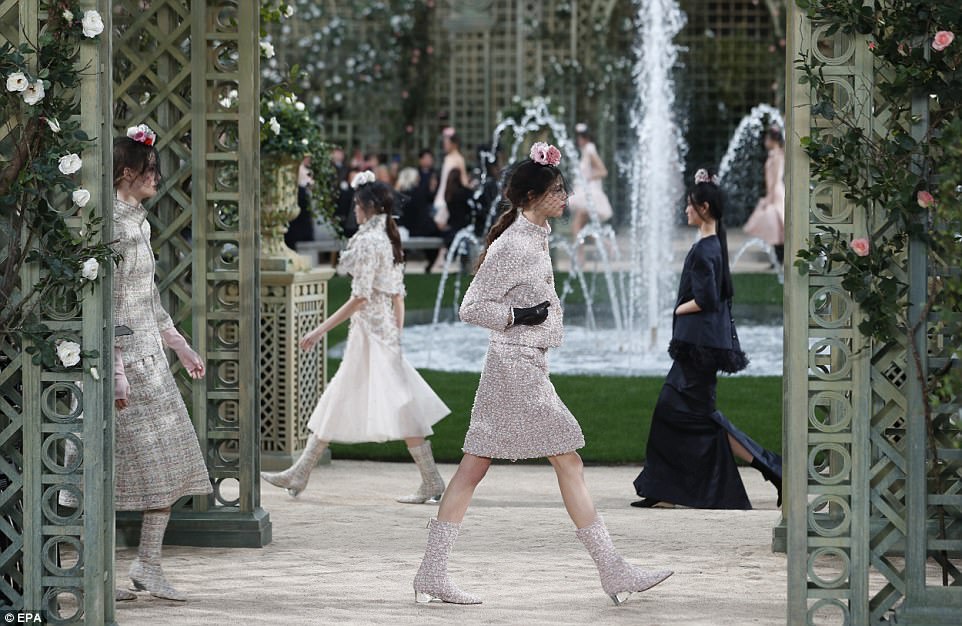 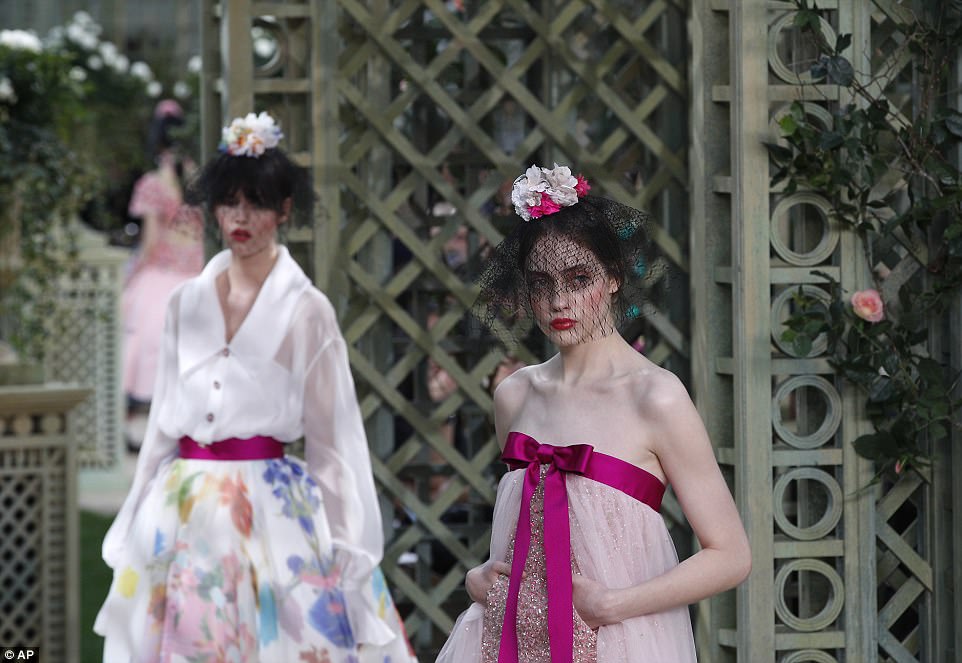 Magic magenta: Bows, sheer fabrics, chiffons and glitter were the key themes on the catwalk

While her acting career is blossoming, Rita is currently enjoying a return to the charts with two hit singles – Your Song and Anywhere.

The Kosovo-born star stepped away from the music scene due to a protracted legal battle with former record label Roc nation – co-owned by rapper Jay Z – which pushed back the release of her forthcoming second album.

She recently revealed her next musical offering had been several years in the making and Rita made sure to praise ‘the nicest guy in music’, Ed Sheeran, for rushing to her aid when her contract dispute was settled last year.

‘I just needed to find a team of people who I could be myself with.. I am really grateful for the support,’ she told The Sunday Telegraph.

On her way: Rita casually placed her hands in her pockets as she exited the show later that day, showing off her curves

Her rules: Model Stella Tennant also attended the show, but chose to wear Balenciaga socks trainers to the event