A grandmotehr told how her day out to Legoland with her family turned into a disaster when seven rides broke down and they got stuck at the top of one rollercoaster in 90F (32C) heat.

Danielle Hollins, 48, from Burslem, Stoke-on-Trent was joined by eight other relatives to celebrate her birthday at the Windsor theme park yesterday.

But they were left terrified when The Dragon ride broke down after they reached the top – leaving them trapped 30ft up for around 45 minutes in soaring temperatures. 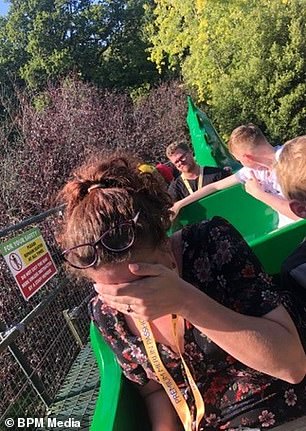 A Stoke-on-Trent family were left terrified when The Dragon ride at Legoland broke down after they reached the top – leaving them trapped 30ft up for around 45 minutes in soaring temperatures. Danielle Hollins’s grandson Finley (left), aged nine, and Claire Downing (right), her son Matthew’s partner, were left terrified

The problems on the day started when it took the group an hour to get into the car park and it was another hour before they got into the theme park itself.

They then queued for the log flume for nearly two hours before Lego Land announced it was closing.

It was one of seven which the grandmother said broke down on the day, causing mega queues across the resort.

Instead, the family waited 30 minutes to enjoy The Dragon rollercoaster, but the ride stopped just as it reached the top.

Ms Hollins said: ‘We queued for the log flume for an hour and three quarters but then they announced that they needed to call maintenance and shut the ride.

‘They gave us priority passes so we queued up for The Dragon rollercoaster which took another 30 minutes.

‘But just as we got to the top, the ride stopped leaving all of us stuck.

‘It wasn’t just us, there were lots of other small children.

‘They had to escort us all down in twos or threes which was really scary.

‘All the staff had safety harnesses but we had nothing.’ 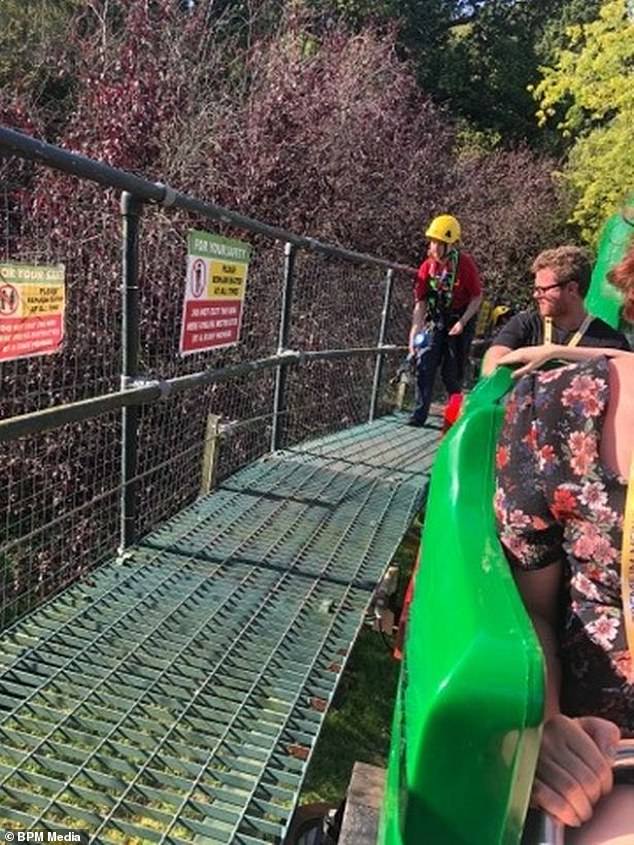 The group were then escorted down to safety by staff who were wearing harnesses, but Ms Hollins claimed the family ‘had nothing’ to stop them from falling

‘I kept asking what would happen if one of us slipped but they just said ‘we’ll catch you’.

‘My partner’s six foot and 18 stone, there’s no way they could catch him. The health and safety was shocking.

‘All in all we were up there for 45 minutes in 32C heat. My son’s partner suffers from vertigo so she was terrified and was escorted off first.

‘When we finally got off they offered us priority passes but it’s not good enough. We’d only been on one ride properly.’

The 48-year-old was joined by her partner Matthew Hall, aged 45, her sons Harrison Taylor, aged 15, and 26-year-old Marcus George.

And Mr George, who lives in Porthill in Newcastle-under-Lyme, Staffordshire, also brought along his partner Claire Downing and their children Ebony, aged 16, George, aged 11, Finley, aged nine, and five-year-old Zachary.

Now the family have been offered refunds by Legoland on their £60 tickets after going on just one main ride – the rapids – having left home at 7.30am and getting back at around 11pm.

Ms Hollins said: ‘We got up really early and then it took four hours to get to Legoland.

‘By the time it got to 5pm we had only been on one ride.

‘My partner complained to customer services and they kept blaming the hot weather. It was forecast so they could have been more prepared.’

Due to the issues, Legoland announced that it would be staying open an hour later until 7pm.

Speaking before setting off back home to Stoke-on-Trent Danielle added: ‘We’ve been before and had a great time but the whole day was a disaster.

‘The park shouldn’t have let so many people in. We tried to keep our spirits up for the kids but it was a nightmare.

‘We were eventually offered refunds but it’s not really good enough. We’re going to stick to Alton Towers next time.’

A Legoland spokesman said: ‘We are very sorry to hear when any of our guests are disappointed with their visit to Legoland Windsor.

‘We want all of our guests to have the best possible experience when they visit us. 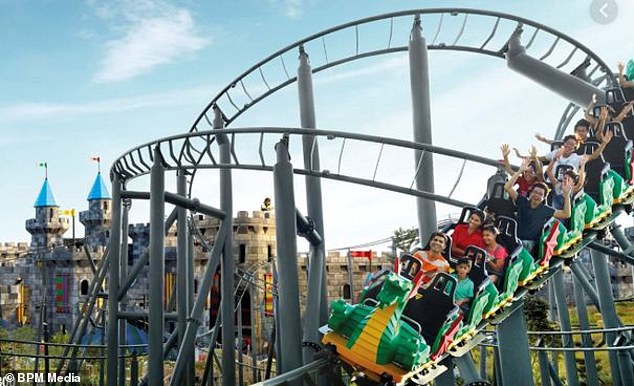 The Dragon ride at Legoland, Windsor, where Ms Hollins’ family got stuck and were rescued

‘We include regular information around the park, through our app and website on queue times and suggested activities to optimise a visit to the resort – particularly on a popular hot Sunday, in peak August, like yesterday.

‘Over the course of any day at the park, rides may break down due to technical issues or guest actions.

‘Our teams work hard to get rides back working and on the few occasions where an evacuation is required to assist guests from our rides as quickly possible with their safety as our number one priority.

‘Due to a slightly longer assisted exit from The Dragon roller-coaster than we would have liked, every guest affected on the ride was given bottled water during the process, and two sets of passes, to enjoy fast track access to two rides of their choice when they got off.

‘Equally, guests who are waiting for a ride which breaks down (in this case, Pirate Falls), are also given a set of fast track passes to enjoy fast track access to another ride of their choice.

‘We also always encourage our guests to speak to our Guest Services team whilst they are at the park, so they can resolve any feedback whilst they are still with us and arrange any appropriate compensation.

‘We would really like to speak to this family about their day and would advise them to contact our customer services team so we discuss this with them further.