Fears are growing that the Premiership’s festive fixture programme could be hit by COVID disruption as Leicester are scrambling to gauge the impact of new cases in their squad.

Sportsmail understands that three Tigers players have tested positive for the virus and now the club are going through an urgent contact tracing assessment process. The problem for the East Midlands club is that they flew home from France together after beating Bayonne in the Challenge Cup last Saturday, so there is a concern that several players and staff may be ordered to isolate.

Leicester are supposed to be taking on Newcastle at Kingston Park in the Premiership on Boxing Day, but if they are forced into a lock-down, there would be a danger of that game being forfeited.

Multiple sources have indicated that rumours are circulating within the league of significant COVID chaos following the latest round of testing yesterday.

Bath claim that they will be able to field a match-day squad at home against London Irish on Saturday, after their clash with La Rochelle last weekend was cancelled – as the West Country club had a number of players isolating on contact-tracing grounds. However, Exeter are anxiously waiting for test results after a ‘double figure’ outbreak last week, which saw their match at Toulouse called off, and the French side awarded a 28-0 win by default. 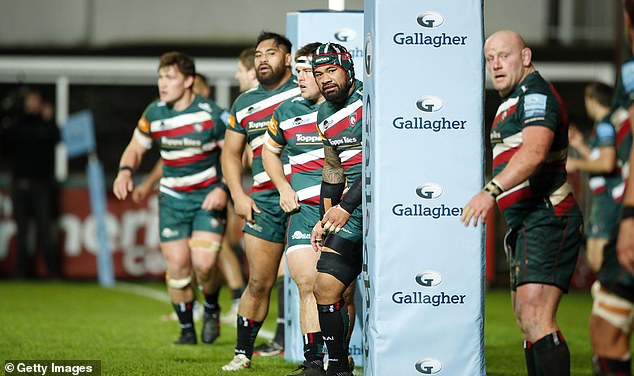 Leicester are supposed to be taking on Newcastle at Kingston Park in the Premiership on Boxing Day, but if they are forced into a lock-down they may have to forfeit

Rob Baxter’s champions are due to host Gloucester at Sandy Park on Boxing Day. Any further positive results could jeopardise that fixture.

The Premiership has avoided significant COVID disruption since last season resumed in mid-August, but Sale were denied a title shot when their final regular-season fixture had to be forfeited due to a COVID outbreak. Soon after, Wasps went into lock-down to avoid missing out on their rightful place in the final, after a number of positive test results within their squad.