Leigh Sales and  former politician Clive Palmer have gone head-to-head in the contentious interview, during which the billionaire demanded the ABC journalist ‘keep quiet.’

During the interview on The 7.30 Report on Monday night, Sales pressed Mr Palmer about whether he feels a ‘sense of shame’ creditors for Queensland Nickle, his defunct company, have not been paid money owed to them.

Tension quickly escalated between the pair, who repeatedly talked over one another and traded barbs.

Leigh Sales (pictured) slams Clive Palmer in a fiery exchange on the 7.30 report on Monday night

‘If you want to continue the interview I suggest you keep quiet,’ Mr Palmer told her.

The 7.30 host, who is renowned for her tough interviewing skills, fired back at the billionaire.

‘If you’ve got nothing to hide, I’m just wondering why you can’t answer a question relating to the point that you just made?’ she asked him.

Before Palmer could get a word in, Ms Sales launched into a series of questions about a Queensland court’s ‘recent decision to freeze hundreds of millions of dollars of Mr Palmer’s wealth.

Queensland Nickel liquidators launched legal action against Mr Palmer to recover funds owed to creditors following the collapse of the refinery in 2016. 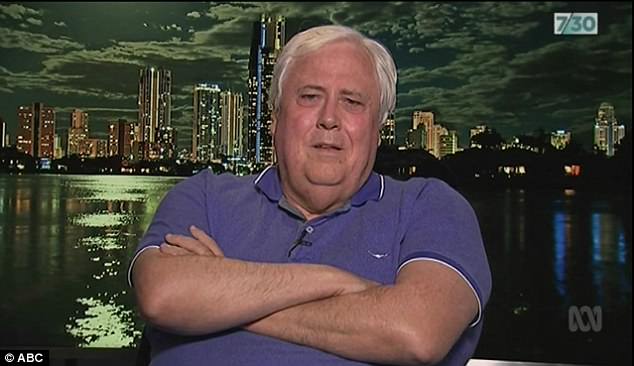 On Friday, the Queensland Supreme Court gave the all clear to freeze almost $205 million of Mr Palmer’s wealth.

Mr Palmer has described the court action as a ‘political witch-hunt’ and says he doesn’t owe anyone money.

‘Well I don’t owe them any money, that’s the reality of it,’ Palmer told Sales during the interview.

Responses over twitter were mixed, with many saying they didn’t trust Mr Palmer and a few arguing that Sales was too aggressive

Reactions to the interview on social media were mixed, with some viewers saying Leigh was too aggressive.

‘Leigh sales is so rude and aggressive can’t even watch the show,’ tweeted one.

Others were happy to watch the fiery exchange, saying it made great television.

‘It’s on! Verbal stoush between Palmer and Leigh Sales. Great TV,’ wrote one.

Many slammed Mr Palmer for his behaviour.

‘Clive Palmer your interview on 7.30 report shows what a disgrace you are,’ tweeted another.