Leila Abdallah urges people to ‘pray’ in wake of coronavirus

The mother of three children mowed down by an alleged drink driver in Sydney last month has encouraged those affected by the coronavirus to pray, saying ‘it has kept her strong’ in the face of unthinkable tragedy.

Leila Abdallah and her husband Danny captured the hearts of Australia after their children Antony, 13, Angelina, 12, and Sienna Abdallah, 9, died while going to get ice cream at Oatlands, in the city’s north-west.

Their cousin’s daughter Veronique Sakr, 11, was also killed instantly in the horror crash.

Mrs Abdallah said at a time of enormous tragedy she had found the ability to forgive her children’s alleged killer by praying to God, and urged those who were feeling uncertain in the face of the ever changing coronavirus pandemic to do the same.

On a blog page set up to pay tribute to the four young children, the heartbroken mother also thanked those who had supported her in recent months. 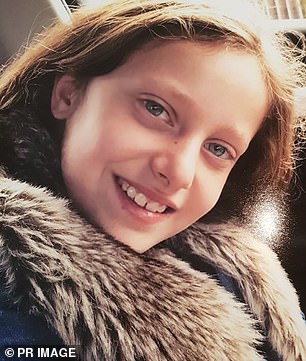 Antony, 13, Angelina, 12, and Sienna Abdallah, 9, (all left) and their cousin Veronique Sakr, 10, (right) were be mowed down by an alleged drunk driver as they walked to get dessert on Bettington Road, Oatlands, about 8pm on Saturday, February 1 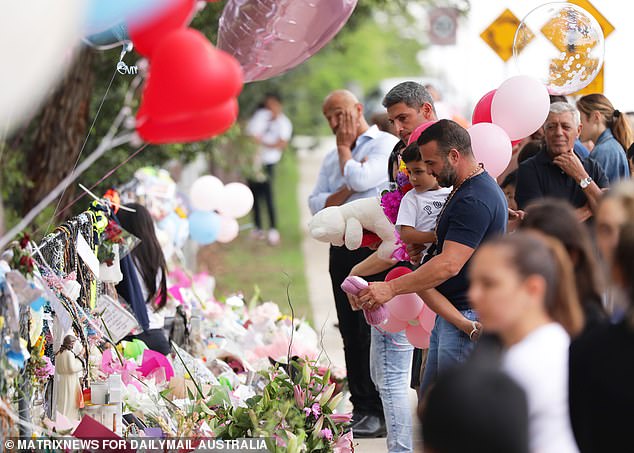 Mr and Mrs Abdallah were regulars at the scene of the crash in the days after the accident, and were often joins by hundreds of people for prayer vigils

‘I would like to thank you for all your thoughts, prayers, kind words, messages, gifts and all your help. Danny and I are so blessed to have each and everyone of you in our lives,’ Mrs Abdallah said.

‘Thank you for all the people we don’t really know but they really felt connected to the story and were touched by it.

‘What’s getting us through this hard time is praying everyday. We try to pray morning and afternoon. That has been giving us supernatural strength.

‘Now, I know the world is going crazy because of the coronavirus, but what’s keeping me strong in the midst of losing my kids is the power of prayer.

‘If we can all pray and focus on God in the midst of the coronations and what’s happening around the world, then I’m sure we’ll all be safe.’

Her words of wisdom come just a week after she and her husband admitted they are struggling to ‘comprehend’ the tragedy that shocked Australia. 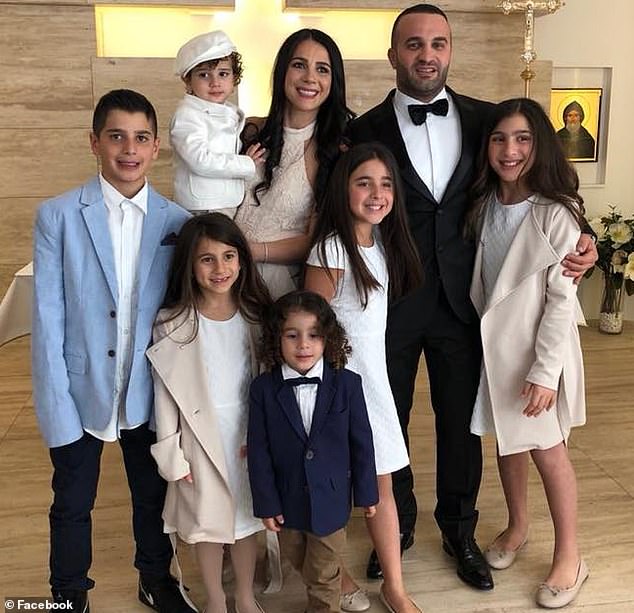 Mrs Abdallah said her faith in God had allowed her to forgive the man who allegedly killed her three kids Antony (far left), Angelina (far right) and Sienna (front left) 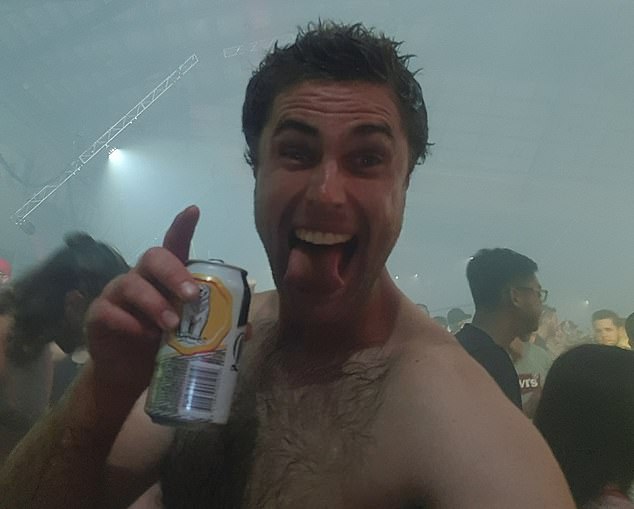 Samuel William Davidson (pictured), 29, is facing 20 charges over the crash including four of manslaughter and is due to face the Parramatta Local Court on April 1 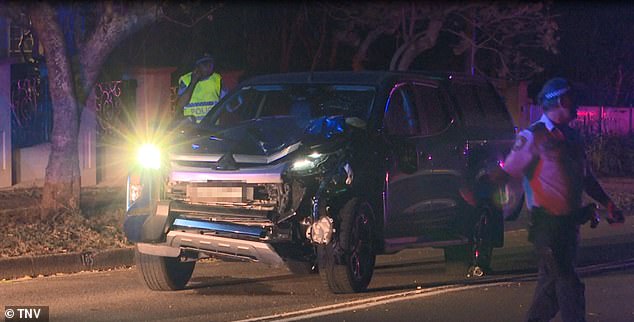 Davidson was allegedly going at speeds of between 100km/h and 130km/h along Bettington Road, which is  a 60km/h zone, when he lost control of his Mitsubish 4WD and hit the group

The three Abdallah children and Veronique were walking among a group of seven to get ice cream on February 1 when they were mowed down.

Samuel William Davidson, 29, had allegedly spent the day drinking by the pool of his home when he drove to the nearby Caltex service station.

As he drove down the hill on Bettington Road on his way home he allegedly reached speeds of between 100km/h and 130km/h before losing control and ploughing his 4WD into the group.

In addition to the deaths of the four children, their cousin Charbel Kassas remains in hospital but is still facing a ‘very long recovery’.

However in positive news, on Wednesday the youngster said his first word since the accident.

Mr and Mrs Abdallah, and Veronique’s parents Bob and Bridget Sakr, gathered last Wednesday night – the 40th day since their children’s deaths, as is tradition in the Maronite Christian faith – to mark the end of the family’s grieving period. 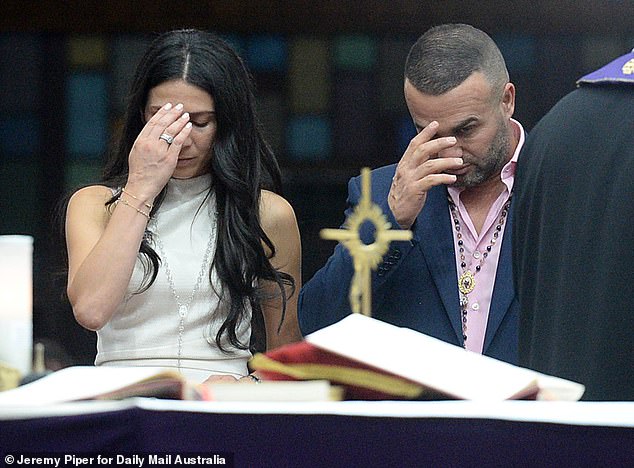 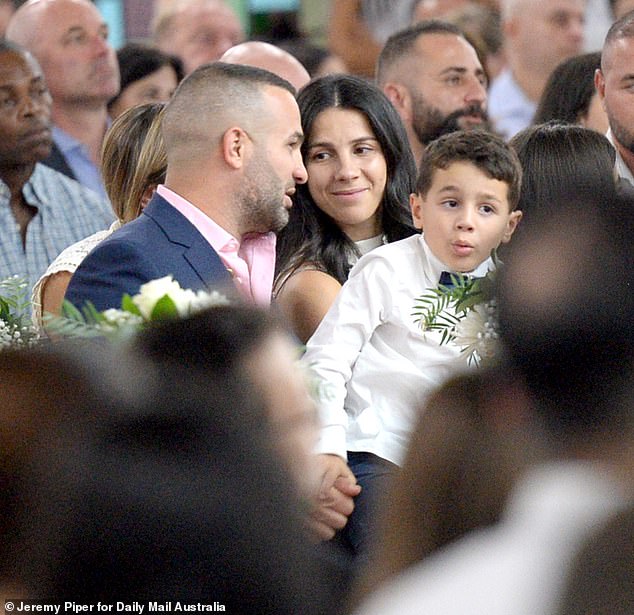 Sitting in the same spot where just weeks earlier tears had flowed readily at the funeral for their three children, Mr and Mrs Abdallah offered the packed congregation a comforting smile 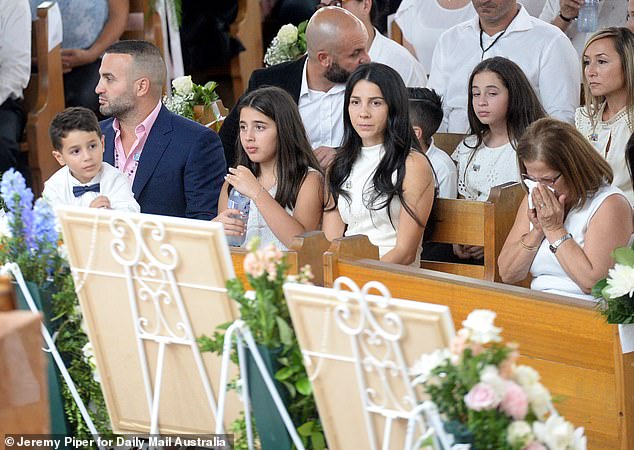 Just as they did at the funeral for their three kids, Danny and Leila Abdallah sat with their daughter Leanna in between them 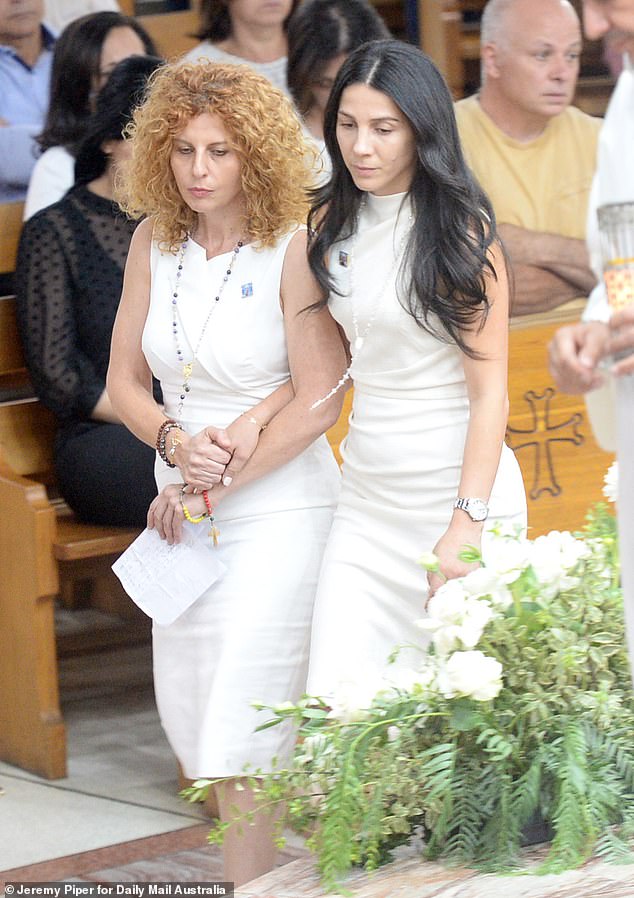 In scenes reminiscent of their funerals less than a month ago, large photos of each of the children sat on the alter at the front of Our Lady of Lebanon co-cathedral in Parramatta.

Mr Abdallah told the packed congregation during the emotional service how crucial his faith has to both he and Mrs Abdallah since the tragedy, and said they believe the four children are now ‘with God’.

‘Our hearts are in a lot of pain and our minds cannot fully comprehend all that has happened,’ Mr Abdallah said.

‘However as for me, me and my house, we will serve the Lord. Please, do what only you can do to give us strength.

Our hearts are in a lot of pain

‘We know Antony, Angelina, Sienna and Veronique are in glory with you. You called them home at this time and I trust you know best.’

As Mr and Mrs Abdallah entered the church with their surviving daughter Leanna in between them, the hundreds at the service rose in unison.

In almost the exact same spot where just weeks ago tears had flowed freely, today Mrs Abdallah offered the congregation a comforting smile.

During the service Monsignor Shora Maree praised Michael Sakr, the older brother of Veronique for his ‘inspiring’ efforts at her funeral. 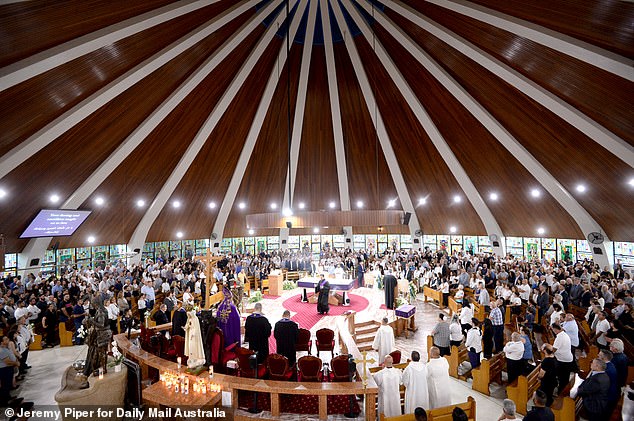 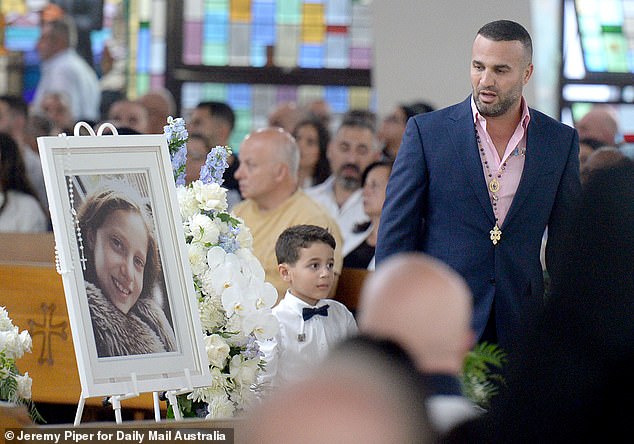 Mr Abdallah looks over the picture of his cousin Bridget’s daughter Veronique, which sat next to similar images of her three cousins Antony, Angelina and Sienna 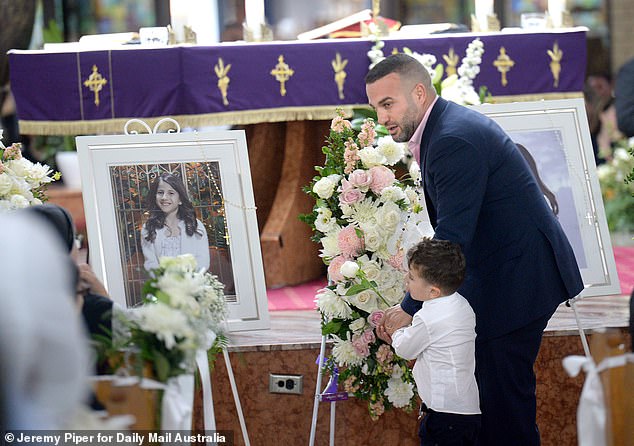 ‘Our hearts are in a lot of pain and our minds cannot fully comprehend all that has happened,’ Mr Abdallah (pictured with his son ) said 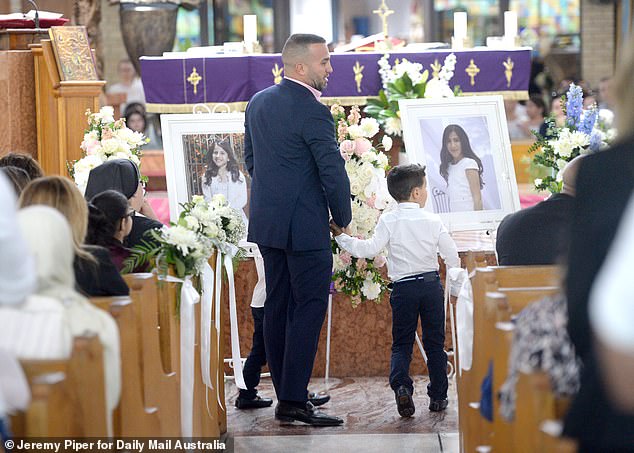 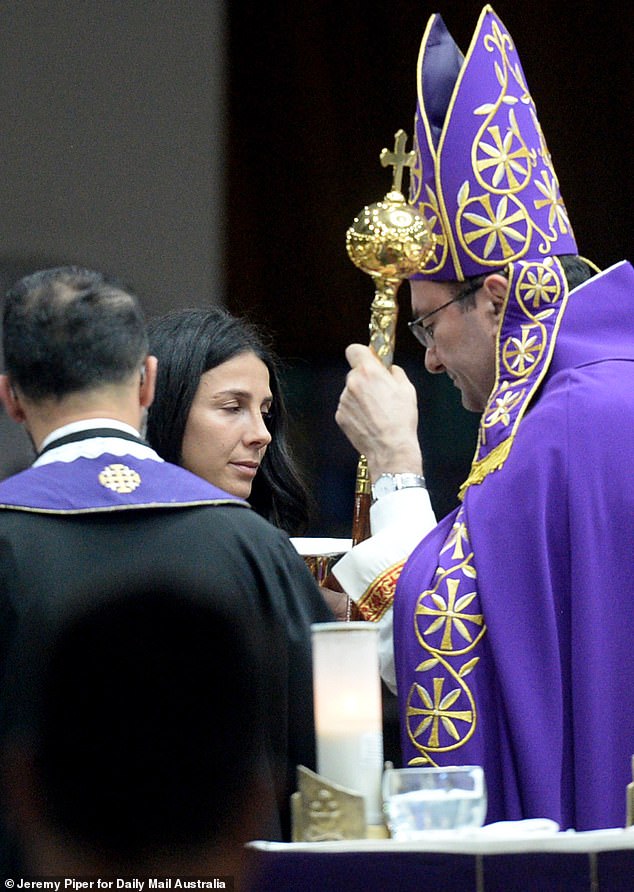 Leila Abdallah (pictured on Wednesday night) started ‘The Four Angels’ blog to remember her three children and their cousin.

At the completion of his sister’s service, Michael joined his school bandmates and led the funeral procession from the church grounds.

‘After all you had to go through, I think that spirit you have… you led and stood up, that’s doing God’s work,’ Monsignor Maree said.

Monsignor Maree also told the congregation how both Mrs Abdallah and Mrs Sakr had in recent weeks dreamed about their daughters Angelina and Veronique.

‘Both of them had the dream separately and the two girls were preoccupied, almost busy, but yet happy,’ he said.

Followers of the Maronite religion believe the souls of the dead remain on Earth for 40 days after their deaths. 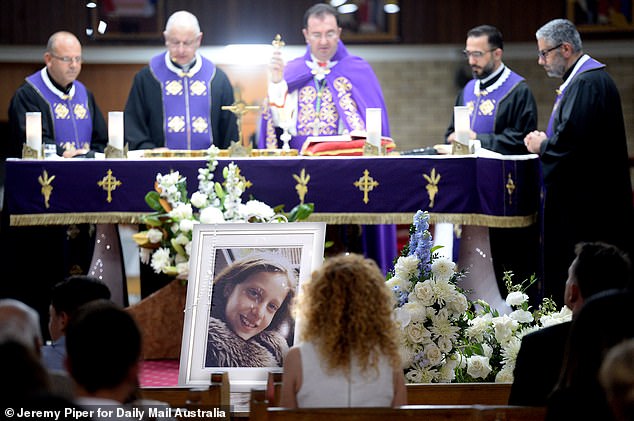 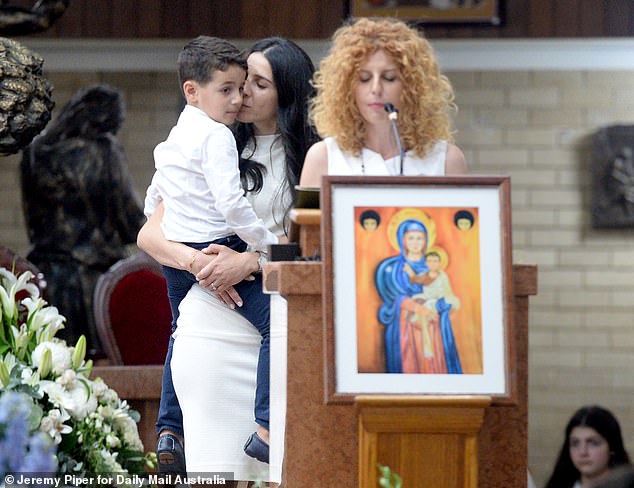 Mrs Abdallah (left) and Mrs Sakr (right) had the same dream about their daughters Angelina and Veronique in recent weeks, the congregation heard 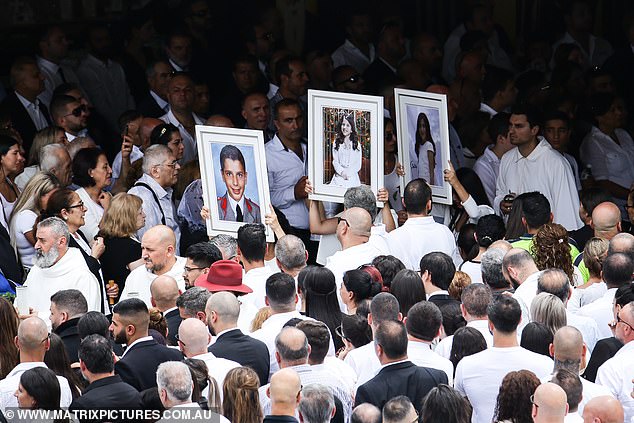 Wednesday night’s mass symbolises the leaving of the children’s souls from Earth.

Antony, Angelina, Sienna and Veronique were walking with three other cousins to go and get ice cream at the local shop when they were allegedly rundown by Samuel William Davidson.

The 29-year-old had allegedly spent the day drinking before getting in the driver’s seat of his ute.

As he drove down Bettington Road, Oatlands, at speed he allegedly lost control and veered onto the footpath – ploughing into the group.

Four children died instantly, while their cousin Charbel Kassas remains in hospital in a serious condition. 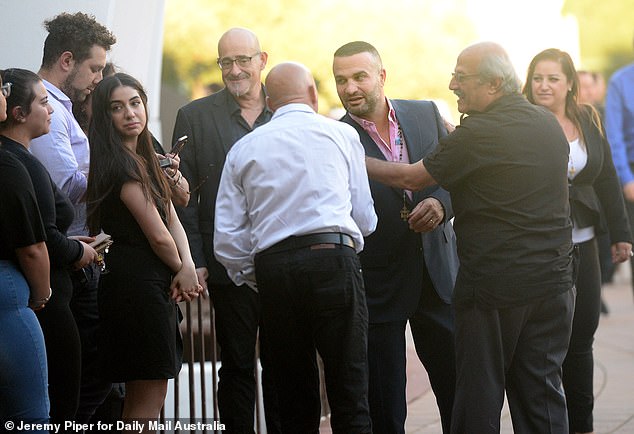 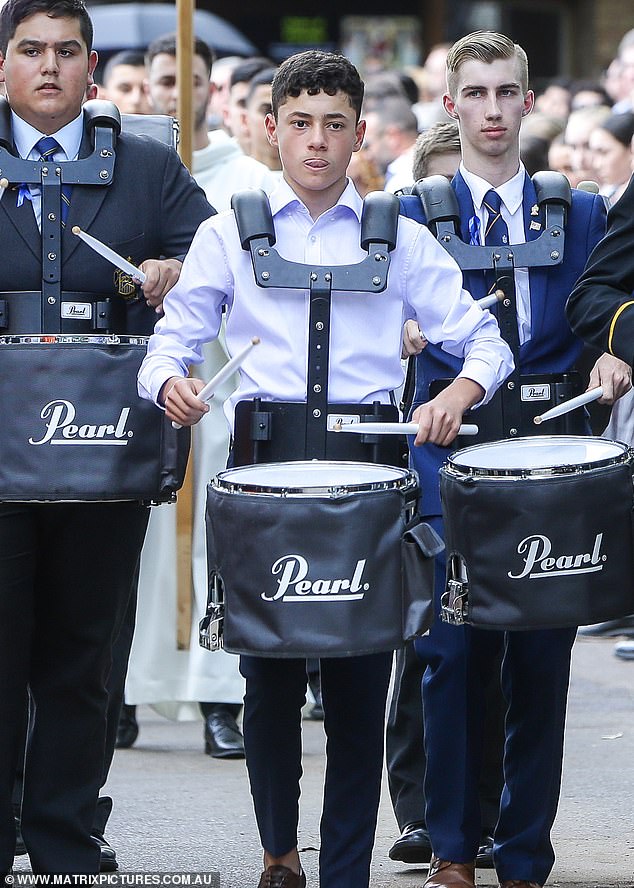 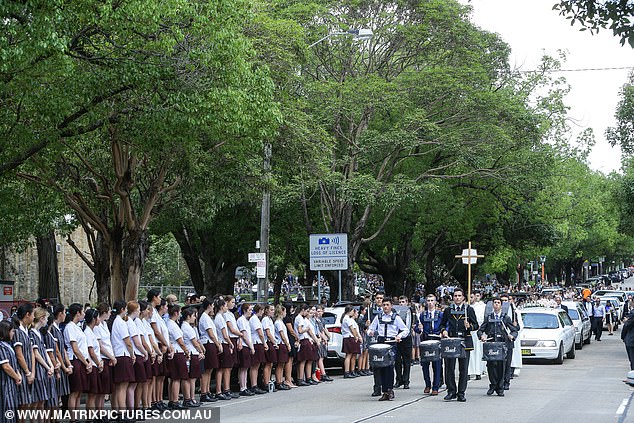 Michael and his bandmates walked ahead of the hearse carrying his sister Veronique’s coffin, as hundreds of school kids lined the street in a guard of honour 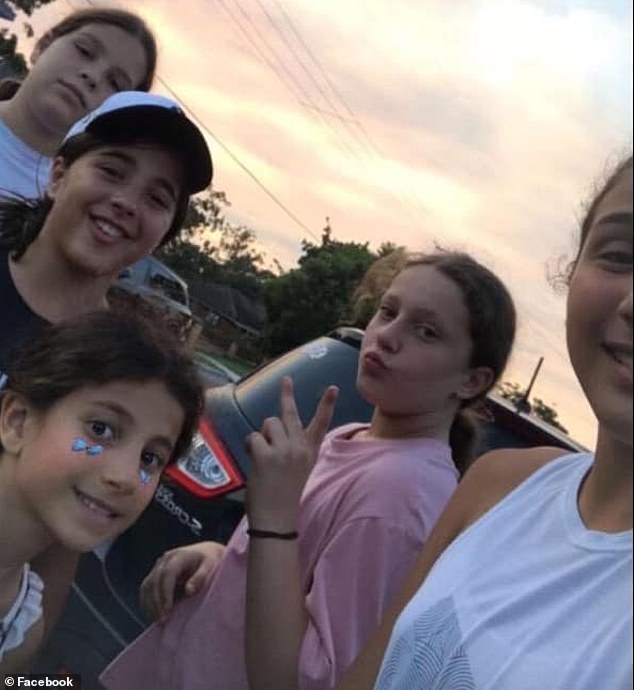 This is the heartbreaking final selfie taken just moments before the Oatlands tragedy. (L to R) Mabelle Kassas, Angelina Abdallah, Sienna Abdallah, Veronique Sakr and Leanna Abdallah, all pose happily for the photo just minutes before 8pm on February 1, Saturday

Mrs Abdallah last week shared the heartbreaking last selfie taken by the cousins just a few hundred metres up the road from where four of them would be killed.

‘Their last sunset walk on this earth. Saturday 1/2/2020 before God called them back home,’ the devastated mother posted next to the photo on Facebook.

Davidson, 29, is facing 20 charges over the crash including four of manslaughter and is due to face the Parramatta Local Court on April 1.