Len McCluskey has told centrist Labour MPs to quit the party now if they are not prepared to accept Rebecca Long-Bailey as their next leader.

The Unite the union boss said critics of the shadow business secretary ‘would be better to clear out now’ amid reports some are planning to quit Labour if she wins the contest.

His comments come after Unite announced on Friday that it was formally endorsing Ms Long-Bailey in the race to replace Jeremy Corbyn.

Moderate MPs view Ms Long-Bailey as the ‘continuity Corbyn’ candidate in the contest and fear she would stick to the same hard-left policies which failed to win the party the last two general elections.

But Mr McCluskey said it is ‘wrong’ and ‘simply unfair’ to describe Ms Long-Bailey in such terms as he also defended Labour’s 2017 and 2019 manifestos.

Len McCluskey, pictured arriving at the BBC this morning, said centrist Labour MPs who are not prepared to accept Rebecca Long-Bailey as the party’s next leader should ‘clear out now’

He said he believed ‘Labour has changed forever’ because of Mr Corbyn’s leadership as he insisted that Unite will be ‘fully behind’ whoever becomes the next leader.

During an appearance on BBC Radio 5Live this morning, Mr McCluskey was asked if he was concerned at the reports that some centrist MPs are planning to walkaway from Labour if Ms Long-Bailey wins.

He replied: ‘No. That is a disgraceful thing. If you want to give me some names then we can debate that with them.

‘The truth of the matter is that if any Labour MP hasn’t learnt the lesson that we need a united party, remember Jeremy for four years has had to fight, not just the enemy like the right wing newspapers… but indeed our own ranks.

‘Now if people haven’t learnt that the British electorate do not like a divided party and want to continue the divisions after this leadership election then frankly they would be better to clear out now rather than mess us about.’

Told that the MPs would leave the party rather than seek to divide it, Mr McCluskey said: ‘Good riddance.’

Ms Long-Bailey has the backing of the current party leadership and earlier in the contest she described Mr Corbyn as a 10 out of 10 leader.

She is one of four candidates left in the battle for the party top job.

Sir Keir Starmer and Lisa Nandy have both secured a place on the final ballot of party members after winning the backing of major unions. 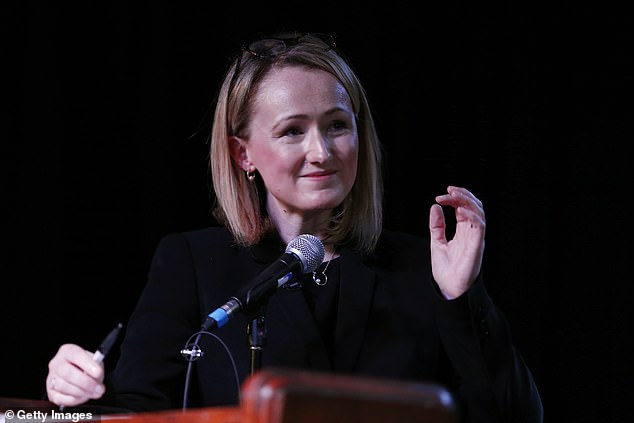 Ms Long-Bailey, pictured at a campaign event in London on January 21, is one of four candidates in the running to replace Jeremy Corbyn

Ms Long-Bailey is now within touching distance of the showdown after Unite’s backing and she only requires the support of one other Labour affiliated group in order to progress.

But Emily Thornberry, the shadow foreign secretary, is facing an uphill battle to make it through having failed so far to win any union backing.

To make it onto the final ballot candidates must win the nominations of 33 local constituency Labour parties or three Labour affiliates, including at least two trade unions.