Germany’s Lennard Kamna won stage 16 of the Tour de France from a breakaway in Villard-de-Lans as Primoz Roglic retained the yellow jersey.

Kamna accelerated away from Richard Carapaz at the top of the penultimate climb of the 164km stage from La Tour-du-Pin to take his first career Grand Tour win.

The main group of contenders, happy to let a 23-strong breakaway have their fun up ahead, rolled in more than 17 minutes later, with Roglic and second-placed Tadej Pogacar locked together to maintain the 40-second gap between them. 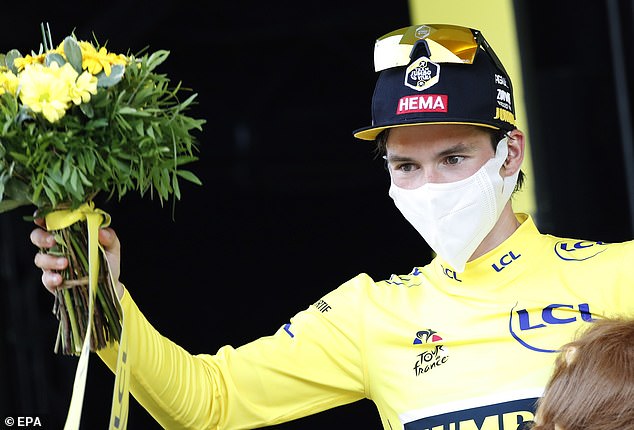 Primoz Roglic retained the yellow jersey, and maintained the gap to Tadej Pogacar in second

There was no change at the top of the overall standings, with Rigoberto Uran third ahead of fellow Colombian Miguel Angel Lopez in fourth and Britain’s Adam Yates in fifth, with Wednesday’s stage from Grenoble to the Col de la Loze above Meribel expected to prove more decisive.

Last year’s winner Egan Bernal, having dropped out of contention when he was distanced on the Grand Colombier on Sunday, was again off the pace and rode home in the grupetto alongside the sprinters and other stragglers down the mountain, at least managing to smile and joke as he did so.

Ineos had instead pinned their hopes on a stage win, with Andrey Amador and Pavel Sivakov joining Carapaz in a large group that was allowed up the road. 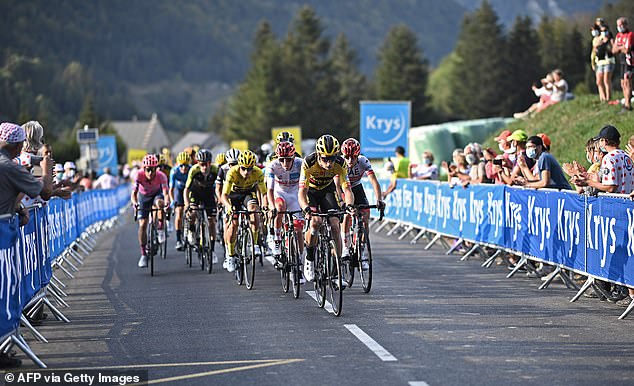 There was no change at the top of the overall standings, with Rigoberto Uran still in third

That group broke up decisively on the climb up the Montee de Saint-Nizier-du-Moucherotte a little over 20km from the line, with Carapaz attacking first but Kamna able to follow and then accelerate away on the valley road to the final ramp to the line.

Kamna, 24, took a stage win at the Criterium du Dauphine last month before taking second place to Dani Martinez on stage 13 of the Tour on Friday.

‘I’m feeling great,’ Kamna said. ‘It’s an absolutely awesome day for me now. It was a fight from the beginning on and I knew I had to make it to the finish alone. When I saw Carapaz upping the speed I thought, ‘Now is the moment to go’ and I just went all in to the end.

‘It’s a big, big, big relief for the team and for me. I can almost not imagine it. The step I made this year is huge and I’m so pleased to win today.’

Nicholas Roche, whose father Stephen took the yellow jersey in Villard-de-Lans back in 1987, was also in the break and came home in eighth place on the stage. 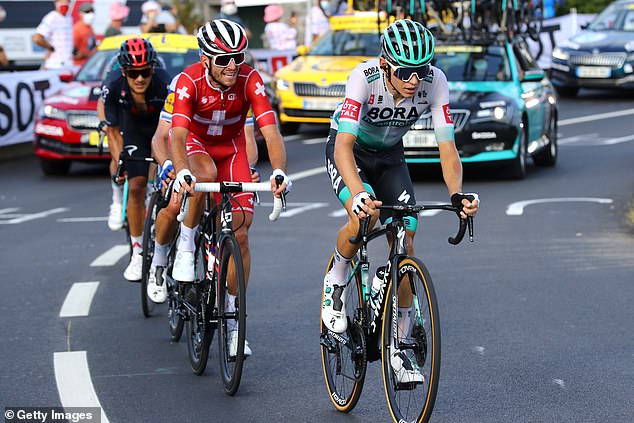 ‘You start the stage with the dream of winning another stage in the Tour de France but also you cannot be too greedy, you’re competing against some of the best riders on the planet,’ the Irishman said.

‘Sometimes it works, sometimes not, but Lenny today showed he was the strongest on the climb. We’ve seen he’s strong already since the beginning of the Tour so he’s a well-deserved winner.’

Neither Sam Bennett nor Peter Sagan made it into the early attacks so Bennett remains 45 points ahead of the former world champion in the battle for green, but Matteo Trentin won the intermediate sprint to pick up 20 points and close his own deficit to Bennett to 60.