Leslie Moonves has confessed to making ‘uncomfortable advances’ in the past after six women came forward and accused the CBS chairman and chief executive officer of sexual misconduct.

‘Throughout my time at CBS, we have promoted a culture of respect and opportunity for all employees, and have consistently found success elevating women to top executive positions across our company. I recognize that there were times decades ago when I may have made some women uncomfortable by making advances,’ said Moonves in a statement.

‘Those were mistakes, and I regret them immensely. But I always understood and respected—and abided by the principle—that ‘no’ means ‘no,’ and I have never misused my position to harm or hinder anyone’s career. This is a time when we all are appropriately focused on how we help improve our society, and we at CBS are committed to being part of the solution.’

Moonves also received support from wife Julie Chen, who said: ‘I have known my husband, Leslie Moonves, since the mid-90s, and I have been married to him for almost 14 years.

‘Leslie is a good man and loving father, devoted husband and inspiring corporate leader. He has always been a kind, decent and moral human being. I fully support my husband and stand behind him and his statement.’

CBS has announced that it will be investigating the allegations, and that Moonves would stay on as CEO and chairman during that time.

Among the six women accusing Moonves are Emmy-nominated actress Illeana Douglas, who told The New Yorker that after signing a $300,000 first-look deal with CBS in 1996 she found herself fending off Moonves, who was then president of CBS Entertainment.

The two spent months working together and Douglas said she came to see him like a ‘father,’ until the day he allegedly forced himself on her in his office.

Douglas, who had just split from Marin Scorcese and was working on the network’s sitcom Queens, said it all happened inm a flash.

‘In a millisecond, he’s got one arm over me, pinning me,’ said Douglas, who described the ‘physicality’ of the incident as horrendous.

Douglas said she eventually broke free from Moonves, but unable to function on set she found herself out of a job soon after and was replaced in the netowrtk’s sitcom.

She told multiple people and got a lawyer, which resulted in CBS paying her $125,000 for her work on Queens and $250,000 to star in a television miniseries.

‘I go from being sexually assaulted, fired for not having sex with Les Moonves, fired by everyone, to “We are going to pay you in full and we also want you to be on this miniseries,”‘ said Douglas.

‘My understanding is, this is what they were going to do in exchange for not suing.’

When asked to comment on the miniseries deal and payment to Douglas, CBS said: ‘There were no funds added for settlement purposes. The amount paid was half of what she was owed, which is not what one might do if concerned about a claim such as this.’

Janet Jones said that Moonves forced himself on her at a pitch meeting while producer Christine Peters said that she was delivering a presentation for a position at CBS Studio when the executive out his hand under her skirt, an accusation he ‘categorically denies.’

The board’s directors were quick to respond on Friday, hoping to avoid a situation similar to the one Facebook endured earlier this week when the social media network lost over $100 billion in value over the course of two days.

‘All allegations of personal misconduct are to be taken seriously. The Independent Directors of CBS have committed to investigating claims that violate the Company’s clear policies in that regard,’ read the statement released just moments after THR posted its story.

‘Upon the conclusion of that investigation, which involves recently reported allegations that go back several decades, the Board will promptly review the findings and take appropriate action.’

The statement continued: ‘The timing of this report comes in the midst of the Company’s very public legal dispute. While that litigation process continues, the CBS management team has the full support of the independent board members. Along with that team, we will continue to focus on creating value for our shareowners.’

This all comes as CBS and Moonves are engaged in a legal battle with its controlling shareholder National Amusements and Shari Redsone, who has assumed the role of CEO for the past two years as her father Sumner’s health deteriorates.

Moonves is trying to halt Redstone’s push to merge CBS with another company National Amusements is the controlling shareholder in, Viacom.

A rep for National Amusements has disputed the notion that Redstone would ever try to push through an unwelcome merger.

CBS Corporation filed a lawsuit in Delaware Chancery Court back in May accusing chairman emeritus Sumner and his daughter, majority shareholder Shari , of ‘breaching their fiduciary duties’ to stockholders.

The complaint states that the Redstones and their company National Amusements are planning to use their power as ‘controlling stockholder’ to approve a merger of Viacom and CBS just days after it was unanimously rejected by members of a Special Committee of the corporation’s Board of Directors.

National Amusements has only a 10.3 percent economic stake in CBS, but they control a staggering 79.6 percent of the corporation’s voting power.

This is due to the fact that CBS has two classes of stock that are publicly traded, and only those with Class A holdings have voting power while those with Class B have no formal authority.

The complaint also accuses Shari of previously using her power to dissuade one CEO from entering their company into merger talks with CBS, filling open board seats with acolytes and carrying out talks which contributed to the approximately $7 billion in market cap that has been lost by Class B stock holders over the past year.

‘National Amusements (NAI) is outraged by the action taken by CBS and strongly refutes its characterization of recent events,’ a spokesperson for the company said in a statement to DailyMail.com.

‘NAI had absolutely no intention of replacing the CBS board or forcing a deal that was not supported by both companies. NAI’s conduct throughout supports this, and reflects its commitment to a well-governed process.’

The lawyers also requested a temporary restraining order to keep Shari and her father out of meetings and ‘from abusing voting control and further harming CBS and its public stockholders.’

The committee is comprised five individuals who are independent from the company and board: chairman Bruce S. Gordon, Gary L. Countryman, Charles K. Gifford,Linda M. Griego, and Martha L. Minow.

‘The Special Committee believes that the Company and its public stockholders face a serious threat of imminent, irreparable harm in Ms. Redstone’s potential response to the Special Committee’s unanimous decision yesterday, May 13, 2018, that the proposed Viacom transaction is not in the best interests of CBS stockholders,’ states the filing. 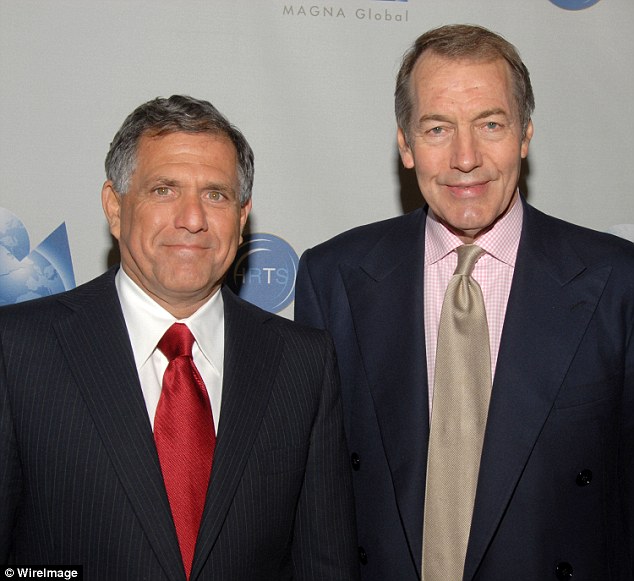 Internal investigations: The Chairman and CEO of CBS, 68, is the one of the most powerful people to be hit with allegations of sexual misconduct 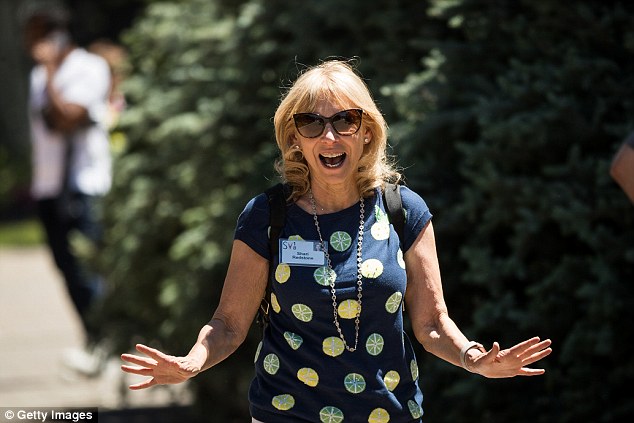 Ongoing legal battle: Shari Redstone (above at All;en & Co earlier this month) and Moonves are at odds over the future of CBS

It then lists a number of ways that Shari has allegedly abused her power to undermine the board and hijack control for herself and National Amusements.

‘Ms. Redstone interfered with the CBS Board nomination process and installed on the Board the Redstones’ personal lawyer, who has sought to implement her directives,’ states one.

‘Ms. Redstone has acted to undermine CBS’s highly lauded and successful management team in a series of escalating attacks, including by talking to potential CEO replacements without Board approval and deriding executives,,’ declares another.

The filing later states: ‘Ms. Redstone reportedly expressed her willingness to replace CBS directors to compel a merger with Viacom regardless of the Special Committee’s process, deliberations, and conclusion.’

Shari’s actions have already cost the company billions according to the filing.

Shari’s actions do appear to fly in the face of her father, who very publicly stated his commitment to CBS being an independent corporation when he was at the helm.

‘CBS’s Special Committee believes that it is only a matter of time before Ms. Redstone will attempt to replace the independent directors at CBS who do not agree with her positions, just as she and NAI did at Viacom two years ago, in order to block the CBS Board from considering appropriate corporate strategies for CBS that would be in the best interests of all CBS shareholders – not just NAI,’ reads the complaint.

‘Plaintiffs are filing this complaint and accompanying motion for a temporary restraining order to prevent Ms. Redstone and NAI from attempting to replace the Board or modify the Company’s governance documents before any Board action taken at the Special Board Meeting becomes effective.’

Sumner, 94, is currently the Chairman Emeritus of CBS, a position he was given after stepped down from his role as Executive Chairman back in February 2016.

He is still the CEO and Chairman of the Board for National Amusements, and the complaint does note: ‘Mr. Redstone has been named as a defendant to ensure appropriate relief.’

It was Sumner’s decision to split his media holdings a little over a decade ago which lead to Viacom and CBS being independent operators.

He then had a change of heart it seems and in 2016, he spent his final weeks trying to find a company or corporation willing to merge with CBS and thus allow them to compete with companies like Amazon and Netlfix.

Shari has made no secret of her desire to join Viacom and CBS since taking over for her ailing father.

It is only Viacom she is interested in however according to the complaint.

‘Ms. Redstone has also made clear that she will not entertain any third-party offers for control of CBS, even if they offer a high premium to CBS’s stock price,’ reads the filing.

‘CBS’s management team, led by Leslie Moonves (CEO and Chairman), is one of the most accomplished and successful in the media business,’ states the complaint.

‘In a demanding and rapidly changing marketplace, the Moonves-led team articulated a strategic plan, executed on that plan and consistently delivered superior results. Nevertheless, Ms. Redstone has acted to undermine the management team, including, without board authority, talking to potential CEO replacements, deriding the Chief Operating Officer and threatening to change the Board.’

It is then noted that Shari’s ‘escalating attacks make it difficult for management to perform its duties and threatens continuity of management.’

National Amusements responded with its own countersuit just days later.

This will all play out in court come October.

Redstone and Moonves were together earlier this month in Idaho, where both attended the Allen & Co conference in Sun Valley.