Les Moonves lost his job after it was discovered he tried to stop a woman from sharing possible allegations of sexual misconduct by giving her a role on a CBS series, reports The New York Times.

Bobbie Phillips was trying to break into the industry back in 1995 when she met Moonves at his office to discuss possible work, a fact that both parties and Phillips’ agent acknowledge to be true.

Halfway through that meeting, Phillips claims that Moonves exposed himself and said ‘look how hard you make me.’

That is when he allegedly forced himself into her mouth, stating: ‘Be my girlfriend and I’ll put you on any show.’

Moonves denies ever forcing Phillips to perform oral sex, but does not deny that the sex act took place. 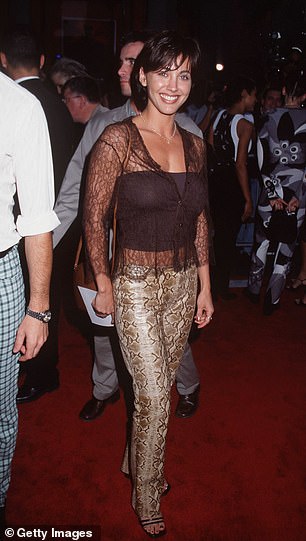 If Bobbie talks…: Bobbie Phillips (left in 93, right in 98) told The New York Times that Les Moonves forced her to perform oral sex on him durig a 1995 meeting 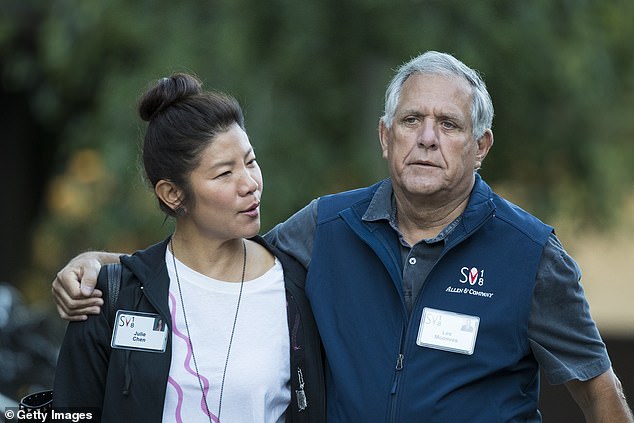 United front: Moonves (above with Julie Chen in July) denied this allegation to the Times, but in a text to Phillips’ agent sent earlier this year that was seen by the paper wrote: ‘If Bobbie talks I’m done’

The two were interrupted halfway through when Moonves received a phone call, at which point Phillips said she fled from the office.

‘I felt my blood rushing in my body,’ said Phillips.

‘I was vibrating. I can still feel it.’

She then recalled grabbing a baseball bat in the corner of the room, saying: ‘All I could think was that I wanted to use the baseball bat to knock his head off.’

Moonves began to worry about the incident approximately a year ago according to Phillips’ agent Marv Dauer, and became increasingly concerned over time.

‘If Bobbie talks, I’m, finished,’ he wrote in a text to Dauer.

Dauer is upfront about the fact that he used his knowledge of the Phillips scandal to try and get work for her and his other clients on CBS.

He also said that one day after she met Moonves, Dauer informed Phillips that the executive had called to say he had lined up producers interested in meeting the woman.

Phillips broke down in tears and refused according to Dauer, saying she never wanted to see Moonves again or meet with any of the producers.

Then, a year ago, word got out about a possible piece being written about Moonves past, and ther CBS head allegedly grew concerned that Phillips would be the focus.

Once the CBS board learned that Moonves offered Phillips work to stay silent he was booted, and now Phillips has also filed a $15 million lawsuit.

In addition to trying to silence her, Phillips is accusing Moonves of defaming her by stating the encounter was consensual.

The CBS board realized – after learning that Moonves tried to find Phillips a job – that they needed to remove Moonves from his position according to emails that were seen by the Times, but were still prepared to let him leave with half of his $180 million severance package.

A deal was put in place that would pay Moonves out the rest of the money if an investigation cleared him, and a new release announcing the decision was being drafted when The New Yorker called to fact check a story that contained on-the-record allegations from six new women.

The board realized at that time there was no way to let Moonves leave with any money until the investigation was complete, and voted to terminate his employment on the Sunday, just hours after The New Yorker published its story.

Some had hoped that vote could have come before the release of the story, but there was not enough time.

The Times previously reported that no matter what the investigation finds, board members have said it is ‘all but certain’ that Moonves will receive no money from the company.

The board was upset not only about The New Yorker story, but ‘new incriminating details from their lawyers.’

Many on the board had been ready to oust Moonves long before that, most notably Shari Redstone.

But Moonves had managed to win a number of board members over by dismissing the claims made in the first New Yorker story and claims that he sexually assaulted a women in the 1980s, who was later revealed to be Phyllis Golden-Gottlieb.

Redstone was actually the first to reveal that a story might be underway, sharing this news with the company in January.

When a February story focused on President Trump and not Moonves, some on the company board believed that they were off the hook.

That was not the case.