In an interview with the Daily Beast, Ortiz Jones says that should she beat the two-term incumbent William Heard, having a female in the seat is of particular importance in the Lone Star State.

‘That matters, frankly. A woman having a baby in Texas is more than five times more likely to die in that process than if she had that baby in California. Representation matters—in no small part, on health care.

‘I would be honored to be the first in a number of respects, but more important is that I am not the last. We will have made progress, but there is still a lot of work to do,’ she adds. 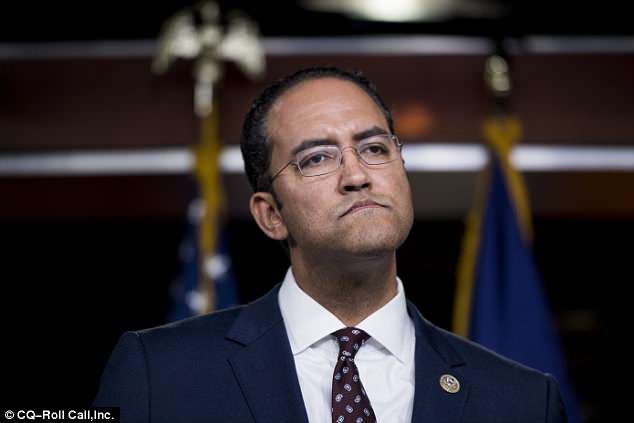 Ortiz Jones says that serving in uniform, as an Air Force intelligence officer, and her subsequent career in national security, brought her to her yearning to become a public servant- as a politician.

‘My experiences in and out of uniform are transferable,’ Ortiz Jones said.

‘I have a record of putting my country above everything else. That’s what people here are hungry for. They want somebody that gets things done. Frankly, if we don’t get it done, how are we held accountable?’

She also wants voters to know she was raised by a single mother, and that her family relied on government services.

‘The fact that at one point in time I relied on several programs as a young child. All of those were critical investments that allowed me to earn a ROTC [Reserve Officers’ Training Corps] scholarship that allowed me to get an education and serve my country.’

‘When I talk about my experiences, I know where I came from, I know how I got here, and I know now my responsibility to help others get here,’ she declared.

She says she is not concerned that she will be attacked over her sexual orientation in the campaign, because, as she says that even if her Republican foes go there, ‘in this day and age, that speaks more to them and their lack of platform than anything else.’

Ortiz Jones says while she is disappointed in President Trump’s attempts to ban transgender troops from serving, she isn’t shocked.

‘To arbitrarily move to ban transgender folks from serving, let’s be clear: It’s based on bigotry.

More importantly she says that those who are transgender and currently serving are doing an excellent job.

‘They should be celebrated for their sacrifices they and their families are making—not discriminated against.’