Jacob Rees-Mogg has warned Theresa May she must deliver a ‘good, clean Brexit’ that removes Britain from the clutches of the European Union – or risk the prospect of Jeremy Corbyn becoming the next Prime Minister.

The newly-appointed leader of the eurosceptic European Reform Group, made up of 60 backbench Tory MPs, outlined his own vision for leaving the EU.

And now the man who is favourite among bookies to become the next Tory leader is hoping the Prime Minister backs the Brexit which Britons voted for – instead of ‘Brino’ – Brexit In Name Only.

Mr Rees-Mogg said: ‘The less of Brexit you get, the more likely you are to get Jeremy Corbyn. If you get a good, clean Brexit and get the advantages from it then the chances of getting Jeremy Corbyn are much diminished.

‘If everything is delayed for two years and then there’s high alignment you will find that by 2022 no-one will have noticed any difference from having left. Then what will be the point of voting for the party that’s implemented it. I’m against “Brino”.’

Jacob-Rees Mogg has warned Theresa May she must deliver a ‘good, clean Brexit’

Despite increasing calls for Theresa May to stand down as Prime Minister, Mr Rees-Mogg threw his full support behind the party leader.

‘The PM has my full support. May the PM live forever, Amen, Amen, Hallelujah, Hallelujah, Amen,’ he told The Telegraph.

He also warned that if Mrs May does not deliver a proper Brexit which Britons voted for, that the Conservatives could be trounced by Labour at the next General Election.

Mr Rees-Mogg also cautioned Mrs May after her apparent reluctance to say whether she would support the Brexit deal she is aiming to deliver for the country if there was another Brexit referendum – something which has angered Tory backbenchers.

He said: ‘My personal view is that if you are in favour of something and if that is your policy it’s helpful to say so.

‘That’s what I would encourage her to do. It always makes sense to argue for the policy you believe in. Otherwise why on earth are you implementing it? But she does have to contend with other members of the Cabinet that don’t want to do it.’ 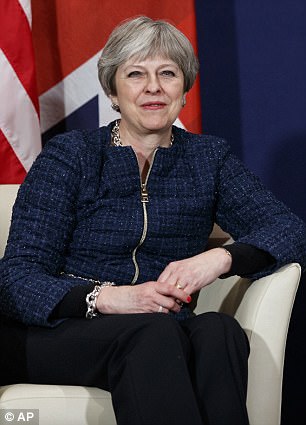 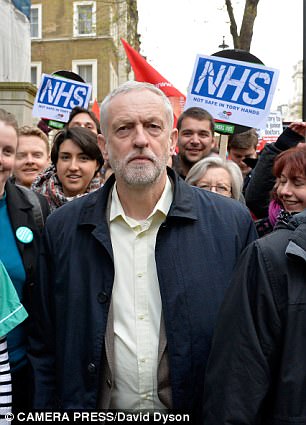 Mr Rees-Mogg said Mrs May (left) had his ‘full support’ but warned if a ‘clean Brexit’ is not delivered, it could open the door for Jeremy Corbyn (right) to become the next Prime Minister

The 48-year-old Brexiteer was not so reserved in his opinion on Chancellor Philip Hammond, who he accused of trying to ‘thwart’ Britain’s plans to leave the EU, and claiming he was ‘jealous’ of Boris Johnson’s ‘charisma’.

Mr Hammond was berated by his own MPs last week after suggesting that Britain would seek only ‘very modest’ changes from its current relationship with the EU after Brexit.

He said: ‘Of course he is wrong. High alignment denies us Brexit. It is about obstructing Brexit. It is essentially code for saying I don’t want to leave the EU, I never did and I don’t think I’m wrong. It’s thwarting Brexit.

‘That is the aim, to thwart Brexit. You simply end up being tied into the EU’s rules without even having a commissioner, MEPs, attending the council or ministers or a judge on the European Court of Justice. 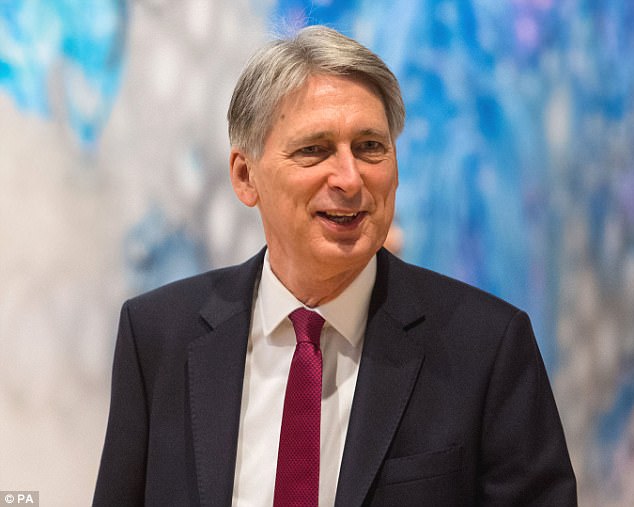 Mr Rees-Mogg was scathing in his criticism of Philip Hammond (pictured), who he claimed was trying to ‘thwart’ Brexit

‘With high-alignment you are actually a vassal state. It’s not what people voted for, nor is it where the opportunity is. The people who want it are the corporatists, the fat cats. It’s why the CBI wants it.’

Speaking about Britain’s future role under the juristidiction of the European Court of Justice, Mr Rees-Mogg said it would be a ‘lie’ to say a clean Brexit had been achieved if the country remained under the court’s thumb.

‘Status quo transition would be a failure of negotiations, it would be a sign of weakness,’ Rees-Mogg said.

In the wide-ranging interview, Mr Rees-Mogg threw his support behind Boris Johnson, who was slapped down by the Prime Minister and other Cabinet ministers for hinting that the NHS be given an extra £100million-a-week from the ‘Brexit dividend’ once the country leaves.

Among those to criticise the Foreign Secretary was Mr Hammond. Of the criticism, Rees-Mogg said: ‘The Chancellor, of course, has important priorities and the setting of the Budget is one. But if his order of priorities is perverse it’s not surprising other Cabinet ministers mention it. This isn’t Philip Hammond’s money. It’s your money, my money, the rest of the country’s money. It is taxpayer’s money.’ 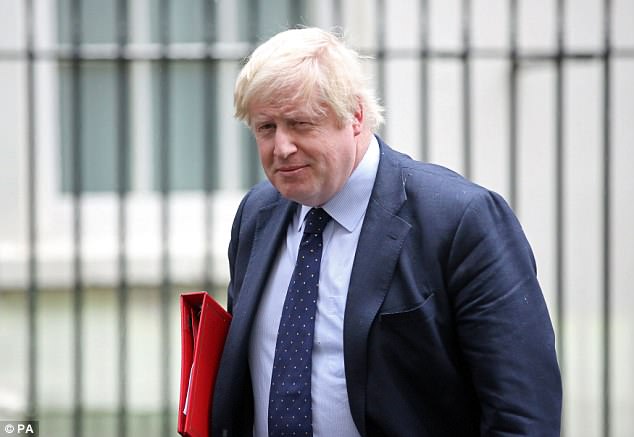 Mr Rees-Mogg threw his support behind Boris Johnson, who was slapped down by the Prime Minister and other Cabinet ministers for hinting that the NHS be given an extra £100million-a-week from the ‘Brexit dividend’ once the country leaves the Eu