Getting five hours or less of sleep a night doubles the risk of getting dementia, a new study warns.

Researchers from Brigham and Women’s Hospital in Boston looked at data from 2,812 US adults aged 65 and over.

‘Very short’ sleep duration, defined as five hours or less, doubled the risk of dementia compared to the ‘recommended’ duration of seven to eight hours, they found.

The study backs up previous research that too little sleep essentially ‘sets the stage’ for forms of dementia like Alzheimer’s.

While this study didn’t look at the reason behind the link, it’s possible that a lack of proper rest prevents the brain from clearing out the toxins that trigger an ongoing decline in brain function.

According to the Sleep Foundation, there is more sleep disturbance reported among older adults than any other age group

The researchers highlight an ‘urgent need to identify the specific recommendations for improving sleep among older adults’.

The NHS says most adults need between six and nine hours of sleep every night, while the US’s Sleep Foundation advises between seven and eight hours a night for people 65 years old and over.

‘Our findings illuminate a connection between sleep deficiency and risk of dementia and confirm the importance of efforts to help older individuals obtain sufficient sleep each night,’ said the study’s lead author, Dr Rebecca Robbins at Brigham and Women’s Hospital’s Division of Sleep and Circadian Disorders.

Globally, around 50 million people have dementia, and there are nearly 10 million new cases every year, according to the World Health Organisation.

More than 920,000 people in the UK are living with dementia – a figure that’s expected to rise to more than a million by 2024, according to the UK’s Alzheimer’s Society.

‘Both sleep disturbances and abnormal sleep duration, although both often modifiable, are associated with the development and progression of Alzheimer’s disease,’ the Brigham researchers say.

Recent research also suggests adults above the age of 65 who report signs of good sleep health, such as waking and feeling refreshed, demonstrate better cognitive function.

According to the Sleep Foundation, there is more sleep disturbance reported among older adults than any other age group.

NHATS is a longitudinal study of beneficiaries of Medicare, the US’s national health insurance program, aged 65 years and older, which has been collecting data annually since 2011.

A sample of 2,610 participants answered sleep questionnaires in 2013 and 2014, which covered several characteristics of sleep disturbance and deficiency, including alertness, nap frequency, how long it took participants to fall asleep and snoring.

They were also asked about sleep duration, which was classified as either the ‘recommended’ duration (seven to eight hours), short (six to seven hours), ‘very short’ (less than five hours) and ‘long’ (more than nine hours).

Participants were also asked about the quality of their sleep quality on a five-point Likert scale from ‘very poor’ to ‘very good’.

The experts also collected information about patient outcomes such as dementia and death from any cause for up to five years after the survey.

Overall, they found a strong relationship between sleep disturbance and deficiency and dementia, as well as overall risk of death, over time.

Routinely taking 30 minutes or longer to fall asleep was associated with a 45 per cent greater risk for incident dementia.

And experiencing a difficulty in maintaining alertness, routinely napping, reporting poor sleep quality, and sleeping five or fewer hours per night was associated with increased risk of death. 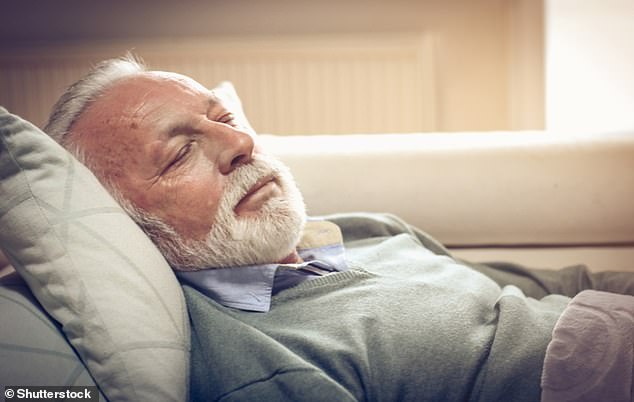 According to the US’s Sleep Foundation, there is more sleep disturbance reported among adults 65 years and older than any other age group

‘This prospective study reveals that sleep deficiency at baseline, when the average age of participants was 76 years old, was associated with double the risk of incident dementia and all-cause mortality over the next four to five years,’ said senior study author, Charles Czeisler, chief of the Division of Sleep and Circadian Disorders.

‘These data add to the evidence that sleep is important for brain health and highlight the need for further research on the efficacy of improving sleep and treating sleep disorders on the risk of Alzheimer’s disease and mortality.’

Researchers acknowledge several limitations to their study – most notably, it did not establish cause and effect, and so can’t conclusively state that lack of sleep and poor sleep quality causes dementia.

‘Future research must be undertaken to consider the causal relationship between sleep and incident dementia and all-cause mortality among older adults,’ they say in the study, which has been published in the journal Aging.

The study does, however, back up previous findings – last year, sleep inefficiency, or spending too much time wide awake in bed, was associated with a 24 per cent greater chance of cognitive decline.

The study, published in the Journal of Neurology, Neurosurgery, & Psychiatry, didn’t determine whether or how sleep problems directly cause cognitive decline or dementia.

However, lead study author Dr Wei Xu of Qingdao University in China said sleep problems might lead to cognitive impairment by causing inflammation of tissue in the central nervous system, including the brain and spinal cord.

In addition, sleep problems could make the brain less efficient at removing waste and contribute to loss of brain cells or atrophy in key regions of the brain.

Dr Jeffrey Illif, a brain scientist at Oregon Health and Science University, previously said ‘changes in sleep habits may actually be setting the stage’ for dementia.

in 2013, Dr Illif was involved in a study that revealed too little sleep can speed up development of sticky amyloid plaques, associated with Alzheimer’s.

That study uncovered the cleansing process that takes place in the brain during sleep.

Dr Illif said: ‘The fluid that’s normally on the outside of the brain – cerebrospinal fluid – it’s a clear, clear fluid – it actually begins to recirculate back into and through the brain along the outsides of blood vessels.’

On the other hand, a 2019 study found people who slept for nine hours or more per night showed a significant decline in memory and language skills, early markers of dementia.