Holt flew to the hermit nation over the weekend, to report on the country’s nuclear program and decision to form a joint Olympic team with South Korea.

He was eviscerated on social media when his first full report aired on Monday, and he said that he had been ‘treated with respect’ during his stay.

Twitter users described Holt’s report as ‘propaganda’ and ‘vile and embarrassing’ – among other things.

Many pointed out that Kim Jong-un hasn’t given his people that same respect, since an estimated 40 per cent of the population is believed to be malnourished.

Others drew attention to the treatment of American student Otto Warmbier, who died in June, just days after being returned from North Korea in a coma.

Warmbier was detained during a trip to the country, after the North Koreans claimed he stole a poster from his hotel.

‘Sure is nice of NBC to help North Korea rehab their image from beating and torturing an American citizen to death. Hope Otto Warmbier’s family is watching!’ Fox News contribute Stephen Miller tweeted.

Holt came under fire on Monday, when he said he had been ‘treated with respect’ by the North Koreans 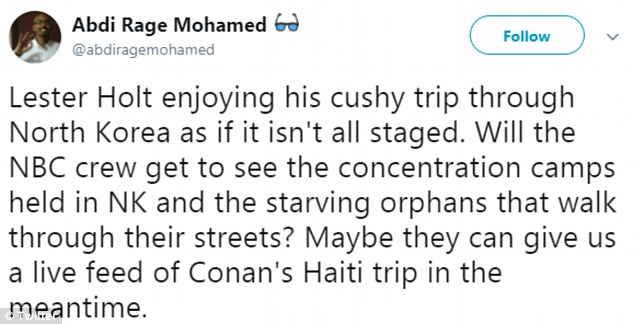 Holt was also criticized for filming part of his report from the North Korean ski resort of Masikryong, where the joint Korean Olympic team plans to train ahead of next month’s games in Pyeongchang, South Korea.

It’s been reported that the state-of-the-art resort cost the Kim regime $35million to build, even with slave labor, while most of the country starved.

As DailyMail.com reported last year, the resort has been mostly a ghost town since it was opened in 2013.

On the day that Holt visited the resort though, the slopes were bustling with families in eerily similar bright-colored outfits.

Holt commented that the resort was ‘certainly a part’ of North Korea that the regime ‘would like us to see’.

‘pro tip for @LesterHoltNBC: when everyone is wearing matching jackets it is a staged event,’ Richard Grenell, President Trump’s nominee for U.S. Ambassador to Germany, tweeted.

Twitter users described Holt’s report as ‘propaganda’ and ‘vile and embarrassing’ – among other things.

North Korea keeps foreign press on a tight leash while visiting the country. Government minders are assigned to all journalists who enter the country, to make sure that the coverage is only positive.  But generally journalists get around this censorship by adding comments about the lack of access to their reports in post-production.

This is perhaps something that Holt wasn’t allowed to do since he was still in North Korea when his first report aired on Sunday.

”It’s super weird to watch Lester Holy sugar coat North Korea in an obvious effort not to piss off the minders and get himself detained. I wonder what he’ll say when he comes back?’ Twitter user Laury Pflaum wrote.

Holt did admit that the North Korean Ministry of Foreign Affairs ‘crafted much of the itinerary of where we can go and [is] advising us on what they don’t frankly want us to shoot’.

He also said that North Korean guards thoroughly searched he and his staff’s belongings when they entered the country – including inspecting the novels they brought to read and even one staffer’s toothbrush.