Let Huawei users switch their smartphones after Google pulled its software from them, say consumer groups

Owners of Huawei smartphones should be offered a chance to easily ditch their handsets after Google pulled support for them, consumer groups have said.

Up to three million Britons were told their phones may no longer get technical support from Google on Monday because Chinese manufacturer Huawei had been ‘blacklisted’ by the US amid growing trade tensions between the two nations.

But consumer champions warned the move could leave smartphone users without services they signed up for.

George Zhao, President of phone brand Honor speaks on stage as he introduces the new Honor 20 series of phones in London, Tuesday, May 21, 2019. The phone is made by the Chinese company Huawei and the top of the range model Honor 20 Pro

For example, Google is now expected to freeze Huawei device owners out of its Android software updates – including fixes for security problems which could make the devices vulnerable to hackers.

Martyn James, of Moneysavingexpert’s Resolver service, said yesterday: ‘If [consumers] bought their device partly because it had Google’s Android system and was marketed as having that link with Google, then it is legitimate to argue that you might not have signed the contract if you had known [this situation] was a possibility.’ He suggested customers who wanted to change handset should start by complaining to both Huawei and the company they bought their phone from.

Justin Modray, of Candid Financial Advice, said: ‘There are certainly grounds for complaint. In some cases, consumers will be able to argue that the product they were sold is materially different to the one they have now as a result of these changes.’

Mobile firms EE, O2, Vodafone and Three said they are monitoring the situation amid calls for them to offer deals for those who want to switch handset makes. The Carphone Warehouse declined to comment on Huawei issues yesterday. 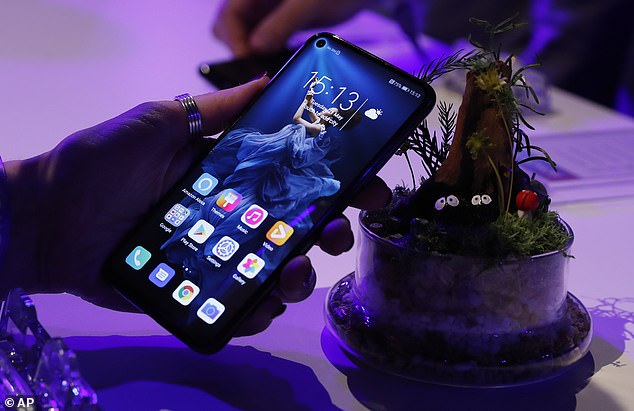 Members of the invited audience of fans and media try out new Honor 20 series of phones following their global launch in London, Tuesday, May 21, 2019